Hedge Vision@hedgevision1d
$105.7m follower assets
Bought more CRWD and CROX
Added:
$CRWD @ $138.70
$CROX @ $48.50
Is this the bottom? I have no idea, and judging from sentiment, we have a ways to go.
However, I will continue to DCA on names I find attractive as I have a long investment timeframe.
The market can keep going down, but history has shown that it always returns higher
Jensen Butler@jensen1d
An interesting combo! Good luck, I didn’t buy today. Preoccupied with wiping tears
View 6 more comments

Hedge Vision@hedgevisionMay 18
$105.7m follower assets
Crowdstrike: An Interesting Statistic
The number of institutional investors who own $CRWD in their top 10 positions doubled to 46 from Q4 👀
Institutional put/call ratio also dropped from 2.23 to 1.35

Strat Becker@stratMay 17
I’d align with @goldenlacllc on this, misunderstanding of the capital intensity of the business is a major risk
Add a comment…

Hedge Vision@hedgevisionMay 12
$105.7m follower assets
How to Read a 13D and 13G Filing
Example: 13D Form from Elon Musk
Elon Musk 13G Form for Twitter: Cover Page
Musk made two mistakes when filing his initial 13G form. First, he was 10 days late. SEC regulations state that an institutional investor must file a 13D/G form within 10 days of exceeding 5% ownership. Musk is classified as a regular institutional investor. Therefore, the deadline to file the 13G form was March 24; Musk filed the form on April 4th.
Musk allegedly made $156 million due to his late disclosure.
If Musk had made his disclosure on time, chances are he would have to buy further shares at higher prices due to his effect on the stock price.
Elon Musk 13G Form for Twitter: Main Page
Second, the amount of shares directly owned by Musk was overstated. He filed an amended 13D form the next day on April 5th to correct this. With the 13D filing, the Tesla CEO also converted his position status from passive to active.
Initial 13G Filing on April 4th: 73.48 million shares.
Amended 13D Filing on April 5th: 73.11 million shares.
Example: 13G Form from Vanguard (QII)
Once a qualified institutional investor (QII) crosses the 10% threshold, they must file a 13D/G form to the SEC. However, the deadline to submit the form differs under certain circumstances as well. Additionally, the position size change thresholds to trigger a 13D and 13G amendment differ. Besides that, the two forms are, for the most part, similar. Let’s get into the details.
Pictured below is the cover page of an amended 13G form depicting Vanguard’s acquisition of Twitter during March of 2022. Vanguard is a passive investor and holds Twitter across its ETFs. Vanguard is classified as a qualified institutional investor (QII), so the circumstances for it to file a 13D or 13G form are different from regular institutional investors. QII’s include pension funds, banks, investment advisors, insurance companies, etc.
Vanguard 13F Filing for Twitter: Cover Page
The “Date of Event Which Requires Filing of this Statement” of March 31st, 2022 may be the most misleading statement on the cover page. This date does not indicate the actual date of transaction. Rather, it discloses the date that triggered the filing.
The exact date(s) that Vanguard purchased TWTR stock to cause it to own a 10% stake is unknown. However, it was some time during March. The SEC received Vanguard’s amended 13G form on April 8th and subsequently disclosed it to the public.
Take a look at Vanguard’s transactions for the past 3 months. All the filings fall within the first 10 days of the month.
Vanguard 13G Filings
Let’s go to the next page, which provides all of the details of the transaction:
Vanguard 13F Filing for Twitter: Main Page
Vanguard’s holdings of TWTR stock are over 10%, which triggered this filing. See #11.
This page is pretty clean-cut and details Vanguard’s voting power, number of shares owned, and any joint ownership. #9 and #11 are what I usually look for.
Since this is a passive 13G filing, it means that Vanguard does not seek to influence Twitter’s business decisions. For its ETF holdings, Vanguard has voting power and generally sides with the company’s management during voting events.
Read the complete piece here: https://foryoureyesonly.substack.com/p/how-to-read-a-13d-and-13g-filing?s=w 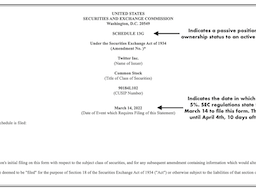 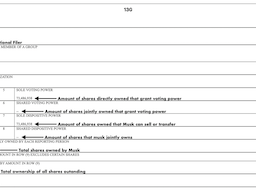 Hedge Vision@hedgevisionMay 11
$105.7m follower assets
13F Deadline For Institutional Investors
May 16th is the deadline for institutional investors to file a 13F form detailing their equity holdings.
Excited to see how funds have been navigating the market decline 👀

Rihard Jarc@rihardjarcMay 12
Were there any news on this?
View 2 more comments

Hedge Vision@hedgevisionMay 4
$105.7m follower assets
Crocs Reports Earnings Tomorrow Morning
$CROX will report Q1 earnings tomorrow morning. I've gradually built up a 4% position over the past month and a half. I paused my buying in order to see how Q1 how will go. In addition, my cost basis sits at $70.15.
Analysts are expecting:
Revenue: $621.88M, up 49.7% YoY
EPS: $1.55
Management has guided for $6B of annual revenue by 2026.
Gonna be a good one! 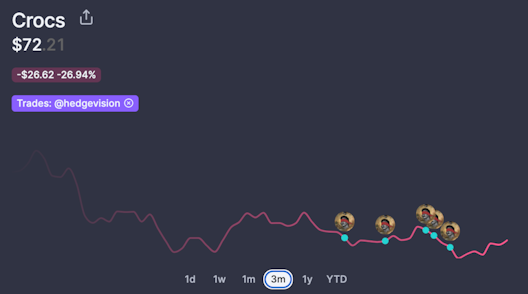 Nathan Worden@nathanwordenMay 5
Here’s hoping for some good earnings from Crocs! 🐊
Add a comment…

Hedge Vision@hedgevisionMay 3
$105.7m follower assets
Tiger Global headed for its worst year ever
“April added to a very disappointing start to 2022 for our public funds. Markets have not been cooperative given the macroeconomic backdrop, but we do not believe in excuses and so will not offer any.”
The fund has had only 3 down years since its inception in 2001, which includes a 7% loss during 2021.
https://www.bloomberg.com/news/articles/2022-05-03/tiger-global-sinks-15-in-april-to-push-this-year-s-loss-to-44 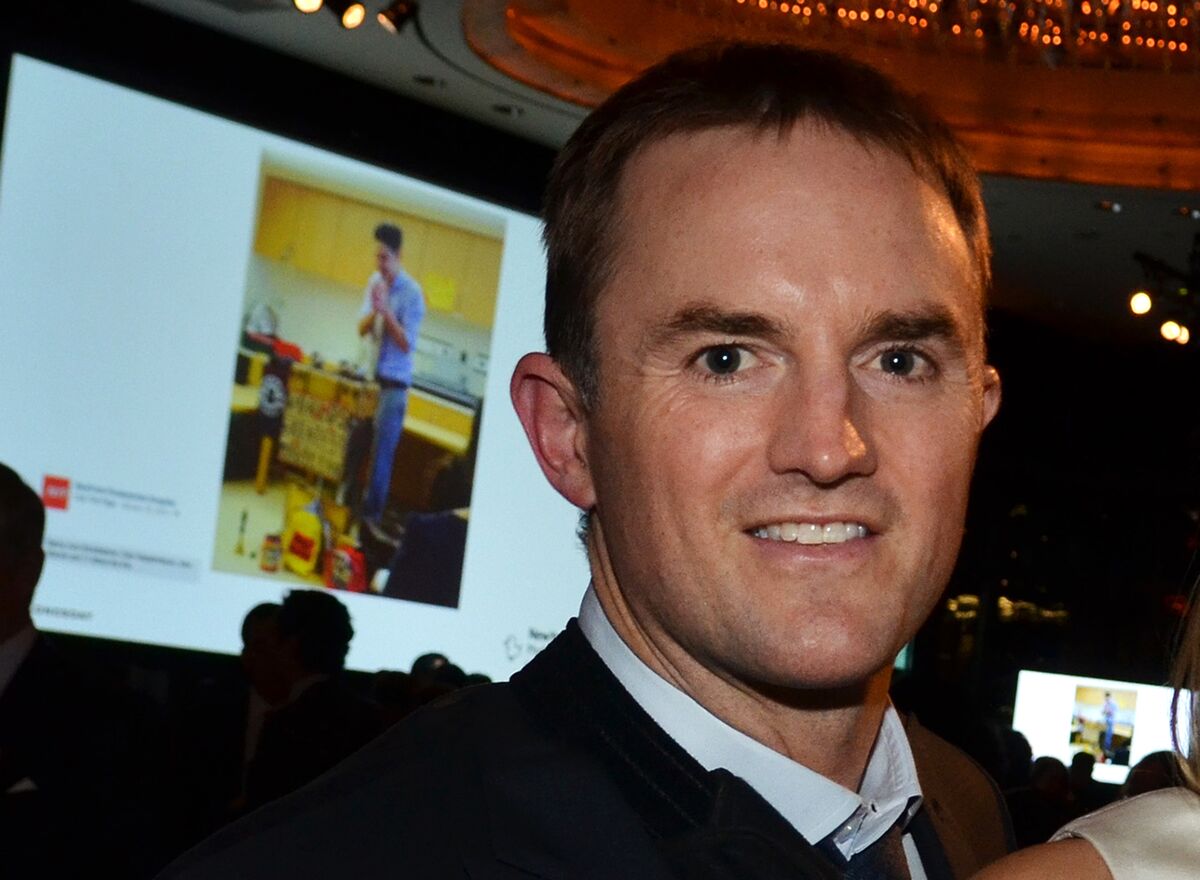 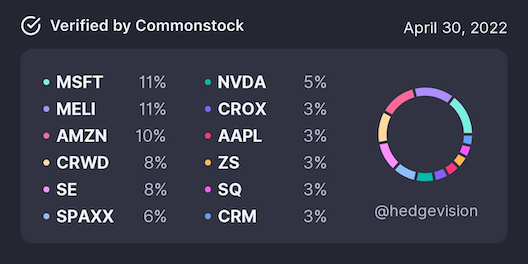