Partnership Investing@partnershipinv4d
$87m follower assets
Serial acquirers - Learnings from successful Swedish companies
What are the characteristics of successful serial acquirers? Why even invest in them?
In this post I share my learnings from a recent event in Stockholm where multiple companies presented their business model.
https://partnershipinvesting.substack.com/p/learnings-from-swedish-serial-acquirers
Learnings from Swedish Serial Acquirers
Thanks to supporters of this publication and the feedback on Twitter, I had the chance to attend the Redeye Serial acquirers themed event in Stockholm. Today, I reflect on what makes them successful.
partnershipinvesting.substack.com
Joey Hirendernath@joeyhirendernath4d
The types of companies like $BRK $IAC and such are fascinating to me. It's like a public company that is also an index of other companies, acquired (in full or in part) by smart investors.
View 1 more comment

Partnership Investing@partnershipinvApril 13
$87m follower assets
$FTCH newest position in PI Portfolio
Farfetch $FTCH is an exciting company taken down by the overall market. The company is stronger than ever in 2022. Set up to grow significantly in the next 5-10 years, current prices provide an opportunity for the long-term investor.
https://partnershipinvesting.substack.com/p/farfetch-integrating-the-luxury-value
Farfetch - Integrating the luxury value chain
Are you looking for a marketplace business with best-in-class technology whose value proposition makes every stakeholder better off? Well, I think I have just found it.
partnershipinvesting.substack.com
Joey Hirendernath@joeyhirendernathApril 13
This is a space I am really interested in generally, I think the space is still quite young in terms of adoption.
"By having an e-concession model, Farfetch turns over the control over this channel to the brand for both their benefits." - Loved this quote :)
View 1 more comment 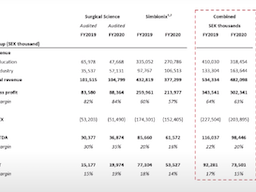 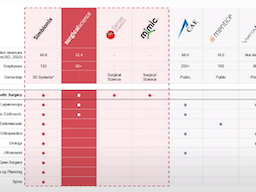 Partnership Investing@partnershipinvMarch 14
$87m follower assets
CellaVision (CEVI-ST) - Bringing blood testing into the Digital Age
https://partnershipinvesting.substack.com/p/cellavision-cevi-st-digitalizing
My opinion is that CellaVision is particularly interesting to investors looking for high-quality small-cap companies. This has been the focus of this blog/newsletter and CellaVision has been on my radar for close to a year.
CellaVision operates in the very profitable Medtech/Diagnostics industry. Companies with durable competitive advantages in this industry have tended to be very profitable investments for shareholders over the years, deserving premium valuations and profit margins. CellaVision has been no exception with a 17,65% CAGR in share price over the past 5 years. Despite its dominant market position in a niche part of the Medtech/Diagnostics industry, there are reasons to believe CellaVision is not done growing and should be a larger company in a few years than it is today.
Today, you will find out why CellaVision is worth researching if you are looking for high-quality businesses.
CellaVision (CEVI-ST) - Bringing blood testing into the Digital Age
CellaVision has the marks of a high-quality business. It has demonstrated an ability to grow very profitably in an attractive niche. Find out what makes CellaVision so special in today's post!
partnershipinvesting.substack.com
Joey Hirendernath@joeyhirendernathMarch 14
The framing of the razor-blade model really helped me understand the breakdown, so thanks for that :)
View 1 more comment

Partnership Investing@partnershipinvMarch 12
$87m follower assets
Company Culture: A competitive advantage?
Hi Commonstock community, I have been reading a lot about company cultures in the past months and some ideas are starting to form. I hoped to use this amazing platform to crowdsource some good resources on culture at high-performing organizations of any sort (military, business, etc.). Hope you can share some resources I can use to write a piece on this idea.
I appreciate any input!
Reasonable Yield@reasonableyieldMarch 12
You should read the Netflix book that Reed Hasting wrote, quite different. Then maybe if you want something more academic, the maybe concepts capitalism?
Also, the machine that changed the world
View 4 more comments

Partnership Investing@partnershipinvMarch 8
$87m follower assets
Keep your eye on the ball
Like most investors, I am not immune to the recent drop in market prices. Companies I have been/am bullish on keep dropping on little to no news. (yes, $WINE, Naked Wines I am also talking about you)
This begs the question: Was I wrong all along or is this a great buying opportunity?
Difficult to stay clear-eyed and try to figure out the answer for all stocks in my portfolio or watchlist. I am biased towards keeping my eye on the ball and forward-looking IRRs, business quality, etc., but evaluating stocks on my watchlist gets more difficult as similar quality companies keep dropping together (paralysis by analysis?). Ironically, I remember complaining a few months ago I could not find many stocks at attractive prices without stretching assumptions about the future!
Whether I should have done nothing like Terry Smith preaches or turn over my entire portfolio, I will be a better investor by the end of this. For now, I will go back looking for the highest quality small-caps I can find!
https://partnershipinvesting.substack.com/
Global Quality Investing
Global Quality Investing is a publication of my research to find high-quality companies worldwide. This newsletter will take you around the world to find the highest quality compounders with a bias t...
partnershipinvesting.substack.com
Conor Mac@investmenttalkMarch 8
Sounds so hindsight-y, but Smith’s “buy quality, don’t overpay, and do nothing” is solid advice in this market.
Maybe some of us overpaid last year, but right now there are some businesses (great ones) floating back to really bargain prices. Buying at the best opportune moment seldom feels ‘good’. We are thinking “how much lower can it go?”, contrary to bull markets when we think “how much higher?”.
Enjoyed this post 🙏🏼
View 8 more comments

Partnership Investing@partnershipinvFebruary 7
$87m follower assets
Industry Analysis: Gaming and the Metaverse
The very first Industry Analysis has been published. In this post, I discuss the Gaming and Metaverse ecosystem and share my thoughts on the developments, opportunities, and ways one might invest in it:
https://partnershipinvesting.substack.com/p/industry-analysis-gaming-and-the
Industry analysis: Gaming and the Metaverse
An overview of the Gaming industry, its trends and an analysis of future developments. I will also discuss the Metaverse and how investors can think about it as an investment opportunity.
partnershipinvesting.substack.com
Nathan Worden@nathanwordenFebruary 8
Great piece! I found it interesting that 78% of gaming revenues are from free-to-play games 😮
Add a comment…

Partnership Investing@partnershipinvJanuary 10
$87m follower assets
Best books of 2021
Here is a short list of the books we found most insightful during 2021.
Complex Adaptive System - Scott Page and John Miller
Engines that Move Markets - Alisdair Nairn
Superforecasting - Phil Tetlock
Influence - Robert Cialdini
Against the Gods - Peter Bernstein
We would recommend all of the above to investors interested in expanding their knowledge and thought-process.
Yegor From100Kto1M@from100kto1mJanuary 10
Against the gods, is one book I think I will be coming back over and over . Great book
View 3 more comments

Partnership Investing@partnershipinvJanuary 8
$87m follower assets
Industry Primer
We are looking into different industries we are interested in. We have the intention of writing about these industries and would like some feedback. Which one of these industries would an industry primer interest you most:
Looking forward to hear which ones would interest you!
Jonathan Garcia@toasty_tradingJanuary 8
Gaming and metaverse
View 2 more comments