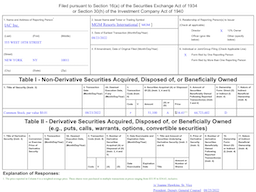 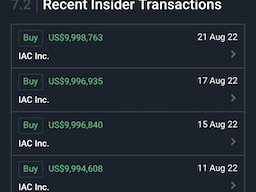 Brett Schafer@ccm_brettAugust 25
Given my trust of management, any news of capital deployment (as opposed to sitting idle on the balance sheet) is music to my ears
View 8 more comments

Morris Franco@morrisJuly 26
$IAC Stub at 52 week low
This is the approx. stub value for IAC which includes Dotdash Meredith, Care.com, Ask Media, minority stake in Turo, etc.
Christopher Halpin, the Executive Vice President & Chief Financial Officer of IAC, presented at Cowen’s 50th Annual Technology, Media & Telecom Conference in early June and mentioned Adjusted EBITDA for Dotdash Meredith is still expected to be above $300 million, “We feel very good about that.”
Regarding the $450 million guided for 2023, “that is still our target, things that.. we can control we feel good about, and then the broader macro environment when you’re looking at the full year at that point, people ask a lot of questions, we can’t answer those. But we are still definitely targeting $450 million of digital EBITDA next year.”
The market clearly doesn’t believe this is a likelihood as shown by the stub value below.
Will Dotdash Meredith meet expectations?
0%Yes
80%No
20%Only the 300 million for FY22
5 VotesPoll ended on: 07/28/22
Yegor@from100kto1mJuly 26
Yeah it’s been painful but things are looking good/interesting under the hood so time will tell
Add a comment…

Brett Schafer@ccm_brettJuly 18
$26.7m follower assets
The Best Time to Buy IAC Was Yesterday. The Next Best Time is Now
(This writing comes from a draft of our quarterly letter, so it uses "we" instead of "I")
Our goal for investors in the Arch Capital Fund is to compound capital at 15% annually while taking on as little risk as possible. This does not mean risk in the form of short-term stock price movements but does mean in the form of durability and future earnings power of the businesses we own.
At $71 a share, we believe InterActiveCorp ($IAC) is one of the lowest-risk bets to have market-beating returns over the next 1, 3, and 5 years. The long-running acquirer and builder of internet brands has a fantastic track record since its inception in 1995 (13% total return CAGR vs. 10% in the S&P 500), even with its shares plummeting 44% so far in 2022.
At a market cap of $6.55 billion, the stock is severely undervalued vs. its potential earnings power over the next few years. Combine this with a rational executive team, $1.3 billion in dry powder, and acquisition candidates trading at depressed prices, and we are excited about the future potential for IAC shares.
Don’t worry, this is not a sum-of-the-parts pitch, but we will outline what gets us excited about owning IAC over the next 12 months and beyond. But first, a brief history of this idiosyncratic conglomerate.
Note: IAC uses adj. EBITDA as its standard financial metric. We understand this isn’t the best metric for encapsulating what value is getting created for shareholders, but we have to take the cards that are dealt to us. Plus, with the asset-light nature of these internet brands, IAC’s businesses should have strong conversions from EBITDA to free cash flow.
History
IAC was officially started in 1995 when the company (called Silver King at the time) named Barry Diller Chairman and CEO. Diller was CEO until 2010 and is still the chairman today. The current CEO is Joey Levin, who got the job in 2015 after working at IAC since 2003. He is under a 10-year contract and, from what we can tell, is set on staying at IAC for a very long time.
IAC’s acquisitions started in 1997 with the 50% purchase of Ticketmaster, and management hasn’t stopped buying companies since. You can look at the full history here and here. The most important acquisitions have been Expedia, Match.com, Tinder, and Vimeo, among others. There are also minority investments, including a recent large purchase of MGM Resorts stock that currently is worth around $1.85 billion.
Unlike other conglomerates, IAC acquires and incubates companies with the goal of eventually spinning them out as their own publicly traded entities. The prime example here is Match Group, the online dating roll-up that started with IAC’s purchase of Match.com in 1999. The company eventually bought and built the leader in the space (Tinder), making it a runaway success as an acquisition. When the subsidiary got large enough, IAC decided to spin-out part of its equity in a 2015 IPO and eventually did a full spin-off in 2020. Today, Match Group’s shares trade at a market cap of $19 billion. This has also occurred (with varying degrees of success) with Expedia, Live Nation, Vimeo, and Trip Advisor.
The key takeaway for us is that when IAC builds something, it is not afraid to let it go and chart its own corporate destiny.
1-year horizon: Turo IPO, Dotdash Meredith rebound
Today, after all the spin-offs, IAC is comprised of these assets: 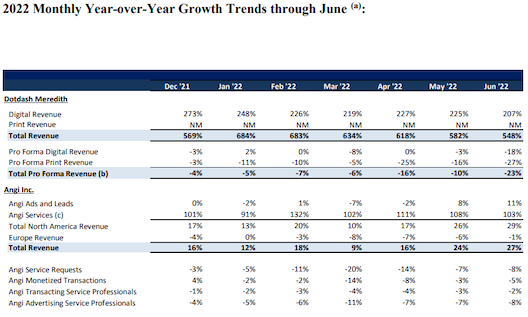 Zack Morris
@zmo
45 days
Commonstock is a social network that amplifies the knowledge of the best investors, verified by actual track records for signal over noise. Community members can link their existing brokerage accounts and share their real time portfolio, performance and trades (by percent only, dollar amounts never shared). Commonstock is not a brokerage, but a social layer on top of existing brokerages helping to create more engaged and informed investors.