Uday@upluskSeptember 29
$95.3m follower assets
More fuel for the $AMZN growth engine
A few days ago I was served a Cookie notice to consent to the use of personal data and cookies on the Prime Video on my TV. 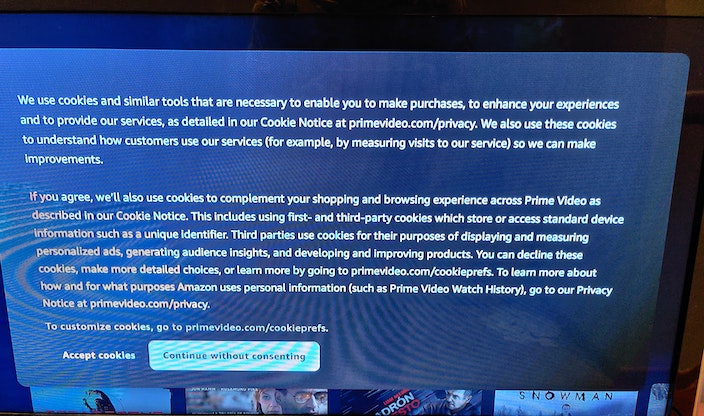 This was the first one I've seen while using the app on the TV, and it made me wonder if $AMZN might be prepping its Prime Video TV/Fire TV app to support an ad-engine of its own or to serve ads on TV platforms/Fire TV devices.
Amazon has a lot of first-party data on you already via its e-commerce platform and other devices, and TVs could add another layer of "installed base" to the growing pile. The move also makes sense, given $NFLX 's recent foray into the ad-supported tier
to reignite its growth that has increasingly been slowing. $DIS already has one and Prime Video looks like it might be next in line to start offering inventory to ad publishers.
Ads is a $30bn business for the company and is probably up there with AWS in terms of growth and margins. TV could be another platform to build inventory, collect more user data and combine it with the rest of the first-party info it has.
Would it make Prime Video's inventory more valuable than $NFLX 's or $DIS 's ? I don't know that yet. It does not have the highest number of eyeballs (if that is a rough proxy for impressions) but it could improve its user profiles (that it uses to both serve recommendations for users and target groups for advertisers). Additionally, it would provide publishers/ad buyers with another base of impressions (and possibly clicks and conversions). One could expect $AMZN CPMs to likely trend upwards from here and add more fuel to its ad growth engine.
PS: I intend to dive a bit more deeper into $NFLX 's ad supported tier and what it might mean for the business/stock and the streaming platforms in general.

Rihard Jarc@rihardjarcSeptember 29
$AMZN's ad business is on fire and with it's walled garden it's ready for the 1st party data era.

Jensen Butler@jensenSeptember 30
I wish my $AMZN position was approximately 10 billion times larger than it is, but fortunate to at least own a part of the company. Juggernaut