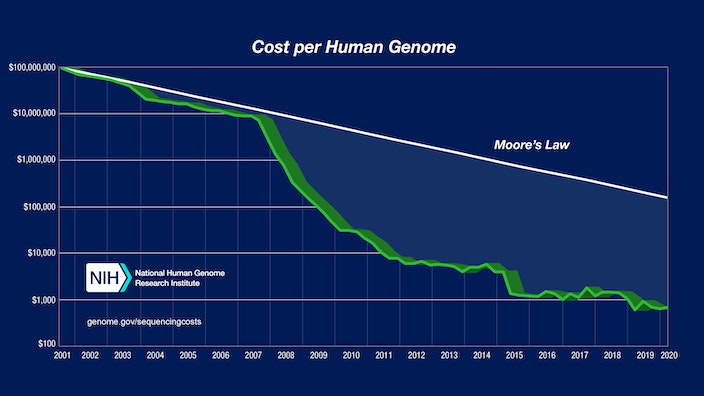 As prices continue to drop, being able to sequence the entire population's genome has become a possibility. This would be a watershed moment in health care, enabling early detection and diagnosis of diseases such as cancer, which would lead to significantly increased survival rates, new cures, treatments, and huge healthcare cost savings.
As of today however, costs are still prohibitive. While you can get a 23andMe test for $199, it tests for only three variants in two genes (BRCA1 and BRCA2), which is woefully inadequate, because there are more than 1,000 variants in these genes that can elevate individuals’ cancer risks.
In other words, a report from 23andMe showing that you don’t have a BRCA mutation doesn’t necessarily mean you’re in the clear.
This highlights the need for experts to be part of the process, as getting a more complete test generates orders of magnitude more data, which requires a clinician to interpret and advise on action steps.
For genomics testing to reach its full potential, it needs to be integrated with the healthcare system; the business model will need to include doctors, not be entirely self-serve.
But integrating genomics tests into the healthcare system is hard; insurance coverage is limited, clinics that offer genetic testing are few and far between, and interpreting the data from these tests isn't easy.
Invitae is focused on building a solution to address these remaining concerns. And they are so excited about the global genetic testing market, they offer competitive pricing to 23andMe, but with the service 23andMe lacks. Invitae offers a "clinical-grade" cancer test for only $250 in which an independent physician reviews your health history in order to put the test results in context.
Offering this much quality at this low of a price this early in the genetics game is not a sustainable business model. For this to work, two big things need to happen:
1) The cost of sequencing a human genome needs to continue to fall
2) The usefulness of genomic information in diagnosing and treating diseases such as cancer needs to continue to materialize.
Other competitors in the space (Quest Diagnostics $DGX , LabCorp $LH, Blueprint Genetics, OPKO Health $OPK , Myriad Genetics $MYGN , Natera $NTRA and NeoGenomics ) are all betting that sequencing costs will fall more linearly.
Invitae is going out on a limb by predicting that sequencing costs will fall in-step with Wright's Law, rather than Moore's Law.
Wright's Law states that for every cumulative doubling of units produced, costs will fall by a constant percentage. Read: cost declines will look more exponential rather than linear.
What this means is that there is a chicken and egg problem: demand needs to be high enough to reach the scale necessary for prices to be low enough to stimulate demand.
Invitae is boldly stepping up to the plate to take on the risk of dropping prices to "unsustainable levels", because they are betting they can crack the egg-chicken problem. I mean chicken and egg problem. You get what I mean. They think they can make the market before going bankrupt. Game on.
If they crack the code first, it will likely be a winner-take-most market, because only Invitae will have the scale necessary to keep the prices low, and it will be even harder for any challengers to follow because Invitae will already be servicing a majority of the market.
And the fun doesn't stop there. Once you have one player cracking the scale problem, they are essentially sitting on a huge oil deposit of genetic health data, which can be anonymized and converted into a machine learning goldmine.
The likelihood of wishlist items like "a cure for cancer" goes up when we have the data sets necessary to train machine learning algorithms to make connections to our health that normal humans could never make.
The global genetic testing market is expected to grow at a double-digit rate and reach $16.9 billion by 2025. Personally I think it could be much bigger than that, although, I also don't think the full potential of this space will be reached within 5 years. I bought more Invitae shares $NVTA yesterday and I am long for at least the next decade.
The way I see it, Invitae will either hit it big, or the business modal won't work and they'll go out of business. This is not something to put your whole portfolio behind. But personally I made the decision to start a position and will be adding more as I continue to follow the space.
Please put any thoughts or questions in the comments. I would love to follow this company with a community of people. Changing the world doesn't have to be lonely.
Nathan 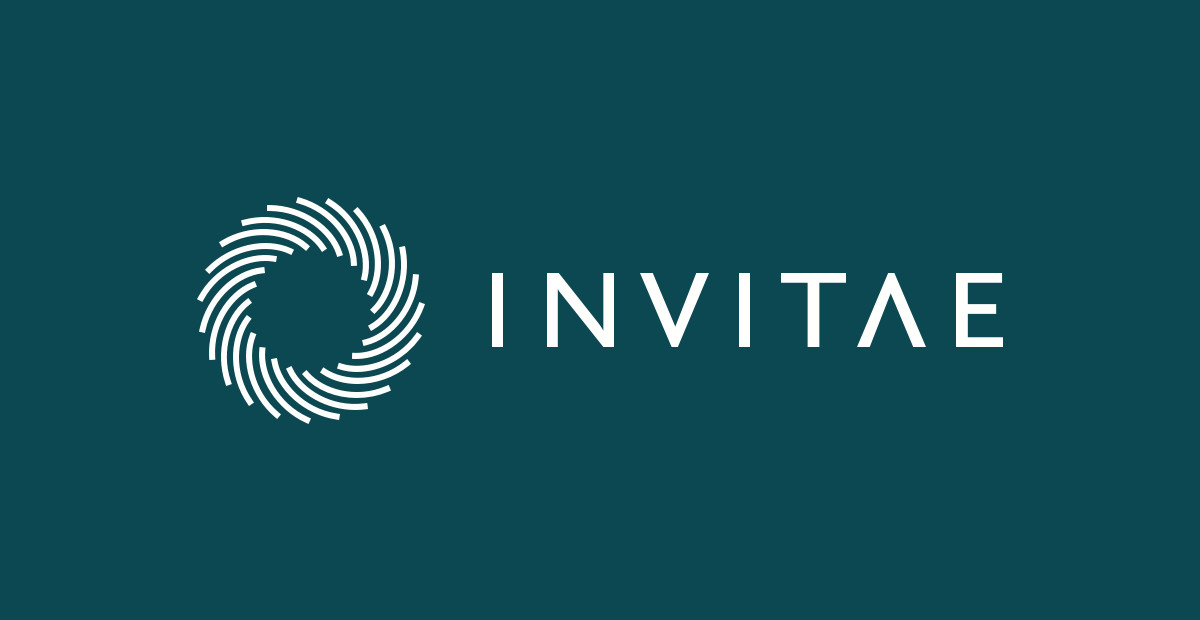 Staying healthy | Find out which genetic test is best for you | Invitae
Order a Cancer, Cardio, or Genetic Health Screen to learn more about your health. After receiving your results, chat with one of our certified genetic experts.
www.invitae.com

Kermit Capitál 🇵🇦🇨🇺@kermitcapital10/22/2020
Thanks for writing this. I own $NVTA but have my reservations. It kind of rubs me the wrong way that they've priced their tests as though they've achieved the operational efficiencies that would have warranted the lower costs. Seems like they've chosen to go on a suicide mission that some other company might be the beneficiary of years from now.

Nathan Worden@nathanworden10/22/2020
Author
That's a great way to put it:
"Seems like they've chosen to go on a suicide mission that some other company might be the beneficiary of years from now"

Part of the reason I'm bullish even though the bet seems quite risky, is that the macro environment seems to be bent in Invitae's favor. Historically low interest rates that the Fed has us believing is the new normal for the next 3 years at least is essentially elongating Invitae's runway. They will stay alive as long as investors keep giving them capital and not a second longer.
Fortunately for Invitae, everyone is being pushed out the risk curve because bonds aren't attractive and cash is a value-losing proposition.
If there was ever a time that a strategy like this might work, I think it's now.

Jeanette Gonzalez@jeanettegonzalez10/22/2020
This sounds too risky for me, but do you know of any alternatives in the same space that might be good?

Josh Worden@worden.josh10/22/2020
This may be an excessive analogy but it feels like that situation where you've got a cupboard with a glass door and you can tell the fine china tipped over and it tilted against the glass door. In order to set the stack of priceless dishes back upright you'd have to open the door, which is the very thing that would topple the whole tower, but it's also your only shot. So open that door and try to catch them all! Feels like Invitae is doing that thing but... you know, with human genomes and all that.

Josh Worden@worden.josh10/22/2020
But anyways yeah I just bought some Invitae!

RamPrasanna@ramkprasanna10/22/2020
Wow! Great in-depth analysis. Bought a couple shares to see how they do.
Mark Worden@wordenmark10/22/2020
Very insightful synopsis. It makes me pull for Invitae even more.

Nathan Worden@nathanworden10/22/2020
Author
@jeanettegonzalez good question- one way to think about it is that Invitae will fail, but they will have successfully stirred up enough demand for tests that another player will be able to step in and provide supply. For me, the pick here would be Illumina $ILMN which sells the machines that enables genome sequencing. Invitae is actually a customer of Illumina. Illumina is a bigger, slower moving company ($47 billion market cap), but I would say more stable, and not necessarily going for a "Moonshot"

Nathan Worden@nathanworden10/22/2020
Author
@worden.josh Lol, are you confessing that you were the one that broke grandma's fine china??

Nathan Worden@nathanworden10/22/2020
Author
Thanks @ramkprasanna - definitely keep the allocation small. This is a riskier one.

Nathan Worden@nathanworden10/22/2020
Author
@wordenmark You're only "pulling for them" because I've been talking about Invitae non-stop for the past two weeks as I've been researching them 😂
But I'm glad you are pulling for them "even more" now!

Joshua Leung@steward10/23/2020
Some really valuable information! Love the analogies. I'm curious to see if Invitae will be subject to "first mover weaknesses". e.g. Myspace vs. Facebook, Microsoft vs. Apple. At what cost to themselves will they create substantial breakthrough and pave the way for other competitors to learn, adapt and implement to create better solutions with a more sustainable business model. Then again...Tesla is the first of its kind and it seems to be doing all right. All in all, a good pitch to buy/hold a certain % in.

Jack Traina@jmtraina10/23/2020
Your article is well written and had many great elements within it. The graph was helpful to view, the background information was great, and the touch of humor was nice! It seems a little crazy to invest in a company that currently does not have a profitable business model; however, "with great risk comes great reward." -Thomas Jefferson. I'm not sure if Mr. Jefferson said these words but if google believes so, that's good enough for me. With Cancer being the number two killer in the United States, and with advances in Medicine and Technology every year, I would hope that NVTA can become more profitable in the years to come. After looking into NVTA more so I will be planning on picking up some of their stock this upcoming week. I'll hope that their company does not go under, as the long term payoff would be well worth the risk to me. Thanks!