Appears once you have 30+ followers
Calculated as the total portfolio value of everyone following you (7 day moving avg)
100% Anonymous
Investor sharing value-oriented analysis of financial markets. Writer of Valuabl (valuabl.substack.com) and author of The Little Book of Big Bubbles (mybook.to/lbbb).
@ValuablOfficialvaluabl.substack.com
0Following
444Followers
PortfolioPostsCommentsTradesWatchlist

Edmund Simms@valuabl7h
$7.5m follower assets
Fed watch • Credit creation, cause & effect • May 18, 2022
(1) The Federal Reserve buys and sells securities and (2) sets interest rates to influence: (3) borrowing costs, (4) lending activity, (5) inflation and employment; (6) with varying effects.
•••
TLDR: Last week, the Fed added $1.4bn net to its Treasury security holdings and $19.4bn net to its MBS holdings. The total amount of Reserve Bank credit increased by $14.8bn net. Note that additions at this stage are likely caused by previous purchases settling. Settlement can take up to 180 days.
•••
1/ The Federal Reserve buys and sells securities
sources: Federal Reserve Bank of St. Louis, Board of Governors of the Federal Reserve System
2/ And sets interest rates
source: Federal Reserve Bank of St. Louis
3/ To influence: borrowing costs
source: Federal Reserve Bank of St. Louis
4/ Lending activity
source: Federal Reserve Bank of St. Louis
5/ Inflation and employment
sources: Federal Reserve Bank of St. Louis, US Bureau of Labor Statistics, S&P Dow Jones Indices
6/ With varying effects
'*'money multiplier is calculated as M2÷monetary base. The pre-GFC average (1958-2007) was 8.9. sources: Federal Reserve Bank of St. Louis, Valuabl
'*'calculated as the change in S&P CoreLogic Case-Shiller U.S. National Home Price NSA Index adjusted for the change in CPI for all urban consumers. sources: US Bureau of Labor Statistics, S&P Dow Jones Indices, Robert Shiller.
•••
ELI5: Why is this gobbledygook relevant?
The Federal Reserve creates money and uses it to buy bonds. They do this to push interest rates down and to put more money into the economy. Low rates mean people can borrow more, spend more, and afford higher prices. More spending and higher prices mean people feel rich, and businesses hire new employees.
But, if prices rise too quickly or people borrow too much, the Fed does the opposite. It sells the bonds it has and then destroys the money it receives. These sales push interest rates up and take money out of the economy. Higher rates mean people can't borrow or spend as much and need to pay lower prices. It makes people feel poorer than before, stops them from being able to spend as much, and makes businesses trim employment.
In addition to this, the Fed borrows and lends to banks. If a bank doesn't have enough money for a day or two, it can borrow from the Fed. If it has too much, it can lend to the Fed. A group of people who work for the Fed, the Federal Open Market Committee (FOMC), decide the interest rate that the Fed will pay for, or demand of, these short-term loans.
The Fed does these because they believe in two objectives: first, that a low and stable inflation rate is good for the economy, and second, that minimising unemployment is desirable. 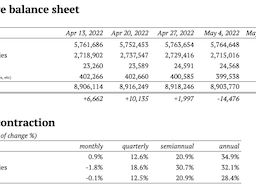 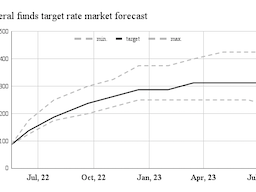 Edmund Simms@valuabl1d
$7.5m follower assets
AMA "Ask Me Anything" • Thursday, May 19, 2022
Want my value-oriented take on something? Let's have a chinwag.
I can't promise an excellent or insightful answer, but I'll do my best. I'm also not afraid to say "I don't know" or "I was wrong."
•••
My background: I studied mathematics and business. Spent a decade in hedge funds, mutual funds, and VC. Wrote a book about the history of financial bubbles. Now I manage a private fund and publish a value-oriented fortnightly journal of financial markets.
Chris Miller@cchriscs1d
If buying your losing stocks is like watering dead grass...how do you judge when to buy and hold in markets like this one?
View 10 more comments

Edmund Simms@valuabl3d
$7.5m follower assets
The cost of capital, May 15, 2022
Interest rates and capital costs are the most consequential yet misunderstood prices in capitalism, connecting the future to the present.
•••
Equity markets crumbled again last fortnight. Investors wiped $6.9trn from global stock prices (see: 'A global stocktake' in Vol. 2, No. 10). In a sign of the times, Saudi Aramco, a gargantuan Saudi Arabian oil pumper, overtook Apple as the world's most valuable company. The S&P500, an index of large American companies, was down another 5.9% to 3,935. The index has fallen 17.5% from the start of the year and is now at its lowest level since March 2021.
source: S&P Capital IQ
As equities fell, so too did government bonds. Yields, the inverse of prices, marched higher as investors digested stubbornly high inflation data and central banks stayed hawkish. The yield on ten-year US Treasury bills, a key rate for valuing financial assets, rose by 17bp. Real rates, the difference between yields and expected inflation, turned positive for the first time since the pandemic began. Bond buyers can now expect to increase their purchasing power by 34bp per year—an insipid proposal, but less chilling than losing it—happy Friday the 13th.
source: Federal Reserve Bank of St. Louis
The equity risk premium (ERP), an estimate of the extra return investors demand to buy stocks instead of government bonds, rose by 28bp. The current premium, 5.49%, is the highest since the peak of the panic in early-2020 and higher than the average of the last five years. Equity investors' fear is rising.
Returning from their pilgrimage to Omaha, prospective value investors are likely to have the Oracle's words fresh in their minds, "be fearful when others are greedy and greedy when others are fearful." After watching stock prices tumble, they might reckon that stocks have finally become cheap—they are not. Stocks are not cheap; instead, the cost of equity is normalising, and stocks are just not as expensive as they have been for the last two years (see: 'No, stocks are still not cheap' in Vol 2. No. 10)
sources: Federal Reserve Bank of St. Louis, S&P Capital IQ, Valuabl
Equity investors aren't the only ones feeling more anxious. Creditors do too. The average corporate credit spread, the difference between corporate and government bonds yields, rose by 45bp. Spreads for riskier companies increased by more than safer ones as investors continue to expect rising interest rates to debilitate struggling firms' ability to make interest payments and refinance.
source: Federal Reserve Bank of St. Louis
Using the average ERP of the last five years, the current ten-year Treasury bond yield, analysts' consensus earnings estimates, and a stable payout ratio based on the S&P500's average return on equity over the last decade, I value the index at 4,249 compared to its level of 3,935.
source: S&P Capital IQ, Valuabl
This valuation suggests the S&P500 index is now 7% undervalued compared to 9% overvalued at the start of the year and 22% overvalued 12-months ago.
sources: S&P Capital IQ, Valuabl 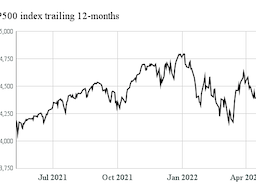 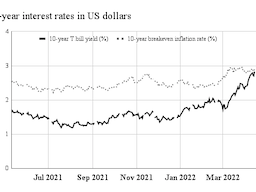 sam stribling@strib2d
@valuabl great piece! Very thorough.
Question for you regarding equity valuations. I agree we were overblown for some time and this is a “normalization” of values. Ive been thinking my ideal scenario would be to see the markets trade sideways for a while.
I know everyone wants to go to the moon and all but do you think it would be healthy to see the market hold and consolidate for a few months to a year and get some of this macro stuff behind us?
View 1 more comment

Edmund Simms@valuabl4d
$7.5m follower assets
The latest issue of Valuabl is out (Vol. 2, No. 10)
The monetary ocean is draining. And when the tide goes out, will you be marooned? Valuabl is a fortnightly journal of the capital markets, helping investors navigate the financial seas, avoid shipwreck, and plunder precious booty.
Amongst the usual titillations, subscribers are getting my analysis on:
We are taking stock of some of the most dramatic market shifts ever. I welcome your readership. Subscribe here and devour the latest issue.
Valuabl, Vol. 2, No. 10
On the cost of capital. Regional equity valuations. No, stocks aren't cheap yet. Corporate shuffleboard. Credit creation, cause & effects. Valuing chocolate and cardboard packaging businesses.
valuabl.substack.com

Edmund Simms@valuabl4d
$7.5m follower assets
"There is no housing bubble..."
According to Neil Barsky, managing partner of Alson Capital Partners and contributor to the Wall Street Journal, there is no housing bubble because of:
He says that prices won't collapse, "they are likely to cool off slowly, if at all."
This was 2005.
https://www.wsj.com/articles/SB112250505320798017

What Housing Bubble?
The thing most overheated in the property market is talk.
WSJ
Conor Mac@investmenttalk4d
Going to read this on the train later. From 2005, haha, gotta love it
View 1 more comment 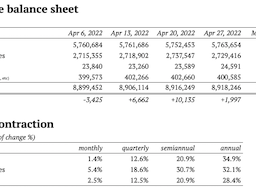 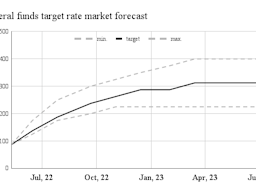 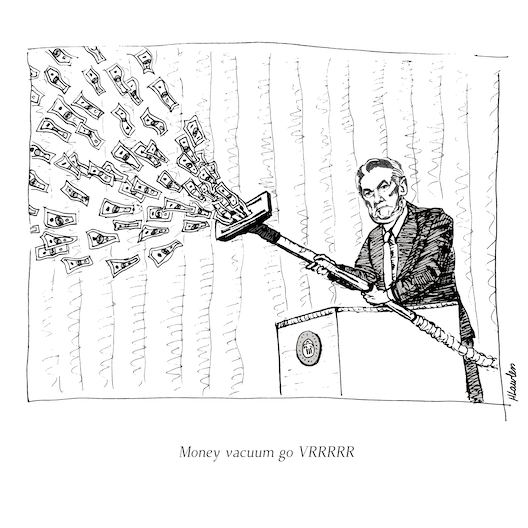 Conor Mac@investmenttalkMay 12
What a beautiful image. Something to hang over one's bed.
View 4 more comments

Edmund Simms@valuablMay 12
$7.5m follower assets
Plus ça change, plus c'est la même chose
A tidbit for students of history:
James Buchanan, the 15th US President, devoted the opening paragraph of his first annual message to Congress in 1857 to an attack on the "extravagant and vicious system of paper currency and bank credits, exciting the people to wild speculations and gambling in stocks."
The more things change, the more they stay the same.
sam stribling@stribMay 12
@valuabl Dude I love your quotes keep them coming! Big fan of history myself! He wasn't wrong either Panic of 1873, Depression of 1882, these cycles are as old as the markets themselves.
Add a comment…