Jennifer@jennymanydots08/26/2022
$26.1m follower assets
Ivanhoe Electric & the KSA
We are on the cusp of a new wave of demand for electric metals as the world transitions from fossil fuels to renewable energy sources and battery storage. To accomplish this, we will rely heavily on these critical metals that are the building blocks of the new green economy – copper, gold, silver, nickel, cobalt and vanadium. 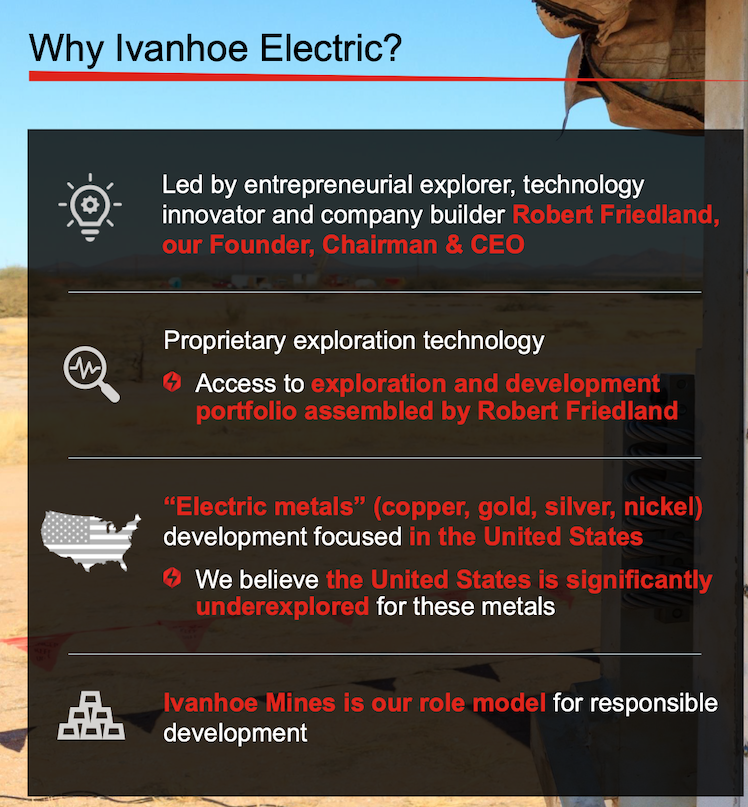 Saudi Arabia has narrowed the field to three finalists for a massive mining exploration licence about 175 km west of Riyadh that it says contains about 25 million tonnes of zinc and copper at grades of 4.11% zinc and 0.56% copper.

The kingdom received six proposals for the 350-km Khnaiguiyah licence and has selected three for its short list: a consortium between Saudi Arabian Mining Company (Ma’aden) and Ivanhoe Electric (TSX: IE; NYSE-AM: IE); a consortium between Alara Saudi Ventures Pty. Ltd. Resources and AlTasnim Enterprises LLC; and a consortium between Moxico Resources Plc and Ajlan & Bros Mining Company.
The third and final stage of the application process will kick off on Sept. 4.
As part of its plan to transform the mining sector into the third pillar of its national economy, Saudi Arabia offers incentives including co-funding of up to 75% of capex through the Saudi Industrial Development Fund (SIDF); a five-year royalty holiday for miners and a 30% reduction on royalty payments for further downstream production processing. 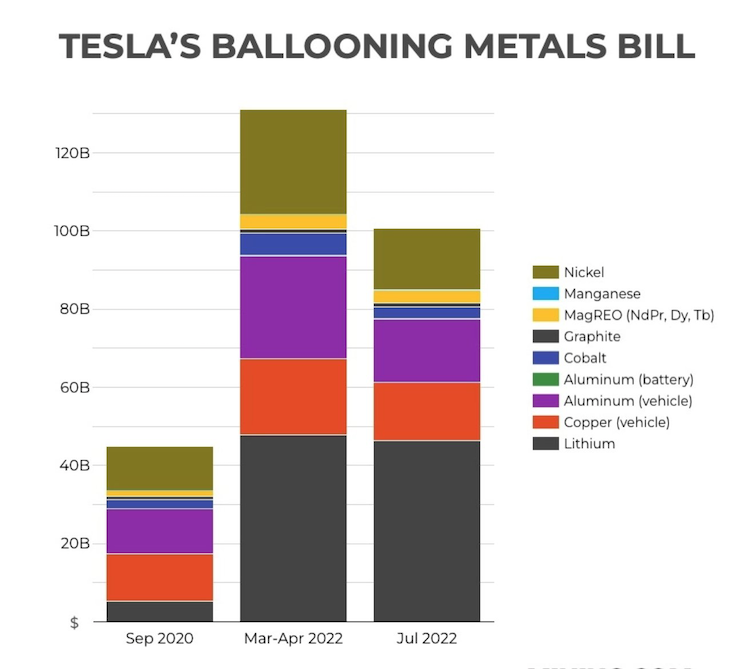 The Wall Street Journal reported this morning that Panasonic is in discussions to build an additional roughly $4 billion EV battery plant in the U.S. EV makers including Tesla are boosting production volume and demanding more batteries from suppliers as they try to reduce long wait times for many popular EV models. Panasonic already jointly operates a battery factory in Nevada with Tesla.
With so many battery factories being built, one would assume battery materials would be easy to come by - but as I've written here several times, metals are in short supply.
Recently debuted mining magnate Robert Friedland's Ivanhoe Electric offers exposure not only to EV metals, but long-duration and long-life batteries (vanadium redox flow batteries or VRFBs) - essential to integrating solar and wind.
https://www.bloomberg.com/news/articles/2022-06-28/ivanhoe-electric-falls-in-debut-after-169-million-in-ipo 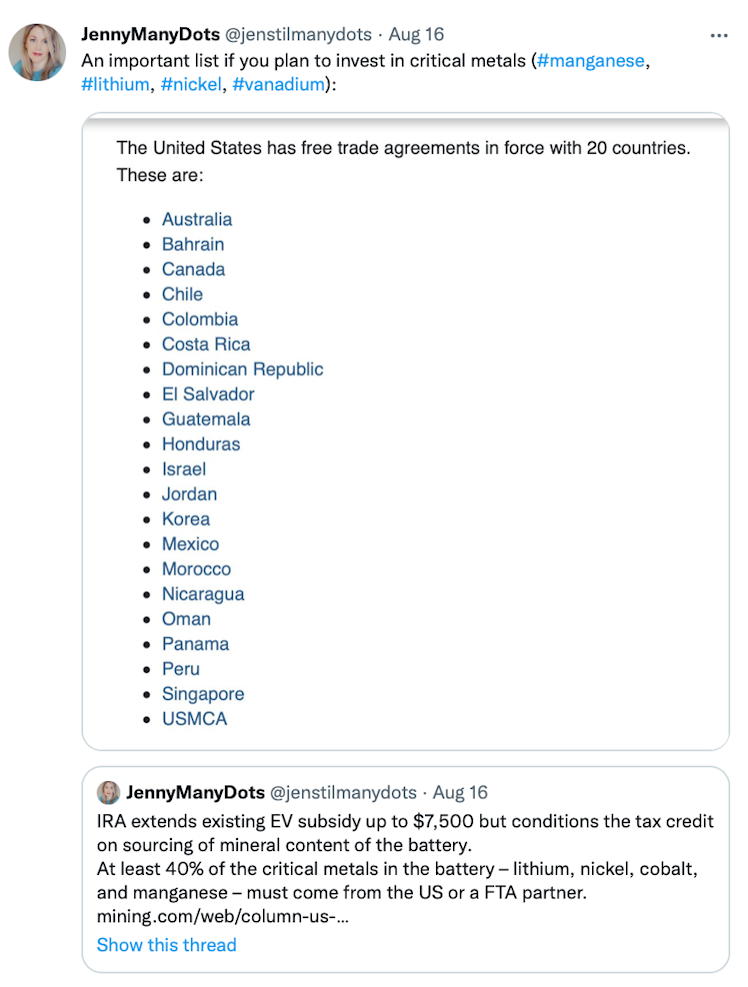 The company also has what it describes as advanced exploration technology including Typhoon, a geophysical survey technology based on Pulse Power, as well as data analytics and geophysical modelling and artificial intelligence for water, oil and mineral discoveries.
In addition, it holds a controlling interest in VRB Energy, a developer and manufacturer of large-scale energy storage systems. 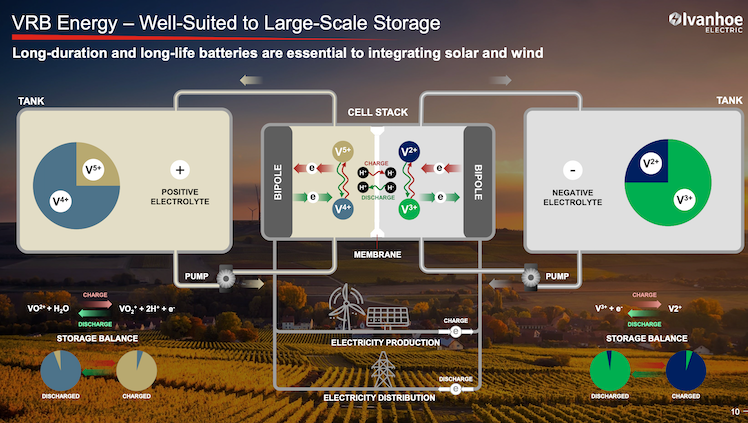 Some folks on Twitter asked if I would be a buyer of $IE on the day it debuted. My fear was that a rush out of the gate would cause an extreme rise in the share price, so I've kept it on my watchlist -- until today.

With the news from Saudi Arabia that $IE is a finalist for a massive mining exploration licence, I felt I couldn't sit on the sidelines any longer. If anyone can accomplish incredible things in mining, it's Robert Friedland.
Shares are currently trading between US$9 and US$10 after rising to a 52wH of $12.04. Given that they have been reasonably rangebound now for the summer and the competition in KSA enters its final phase on September 4th, it seemed like excellent timing to buy.
Please DYODD, and as always I'm happy to answer any questions that I can! 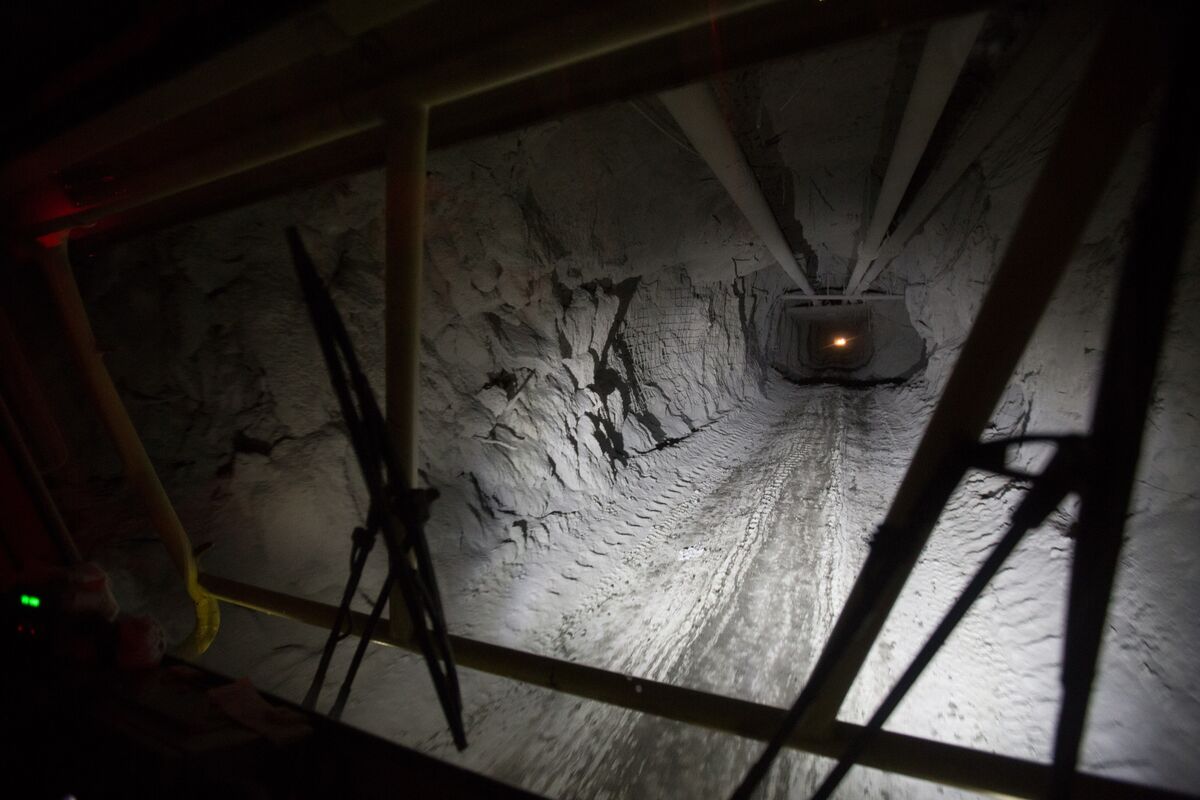 Bloomberg.com
Ivanhoe Electric Falls in Debut After $169 Million in IPO
Ivanhoe Electric Inc. fell 8.1% in its trading debut after raising $169 million in an initial public offering that was the biggest in the US since May.
No comments yetBe the first to add your insight!