Stock Metal Investment@stonkmetalJuly 12
$22.1m follower assets
Buy the dip in $RICK to profit from human desire
Strip Clubs - Music, Booze and (almost) naked women. What's a better place to look for a sound long-term investment idea? Seriously though, in my opinion, RCI Hospitality Holdings, or more commonly known as RICK, offers a very compelling long-term investment based on multiple factors in a stigmatized industry.
Let's begin with a TLDR of my thesis: RICK is a high-margin business with a deep moat rolling up a recession-proof(yep, strip clubs are recession-proof. I'll get to that later) industry while having very capable capital allocation and a cheap valuation.
RICK operates in two main sectors: Nightclub/Stripclubs and Sports bars.
What makes the nightclub industry so appealing? There are roughly 2200 clubs in the US of which around 500 meet RICKs acquisition criteria, with around 49 RICK is a big player, but still owns a small share of the market. Due to regulatory hurdles (most municipalities won't give out new operating licenses), the amount of clubs isn't increasing and many are owned by aging people looking for an exit. This is where RICK, as the only public roll-up in the sector, is a preferred buyer.
Night clubs have excellent profitability if operated well. RICKs club operating margin has steadily increased over the recent years (excluding 20 due to lockdowns) up to a 32% GAAP operating margin. Note that even though 2020 should have been a disaster, RICK still managed to stay profitable! Clubs are a very resilient business. 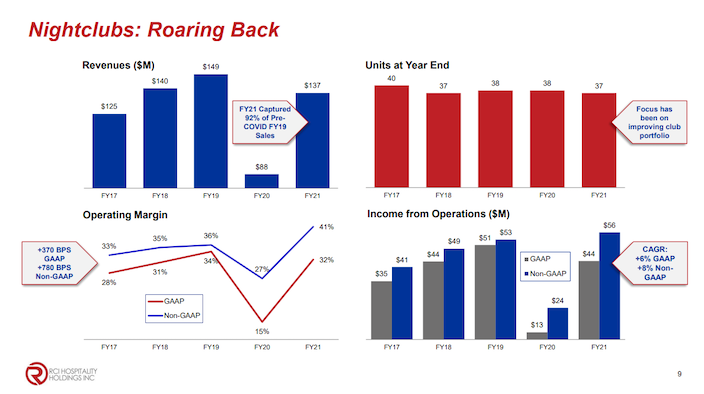 The second segment is the military-themed sports bar brand Bombshells. Bombshells are currently being built by the company and they are looking to franchise it in other geographies where the RICK management isn't as well versed. RICK is running a similar strategy to its clubs here: Focusing on high-margin businesses. Bombshells have above-average alcohol sales compared to peers and thus manages to rock high operating margins of 23% already while in the growth phase. RICK owns the real estate for its clubs and bars and still manages to generate 25-33% Cash on cash returns on newly opened Bombshells, showcasing the high profitability of the concept. RICK is open to spinning out Bombshells in the future to take advantage of a higher multiple than the standalone company would fetch. RICK already turned down a $280 million offer for its bombshells, according to the CEO. 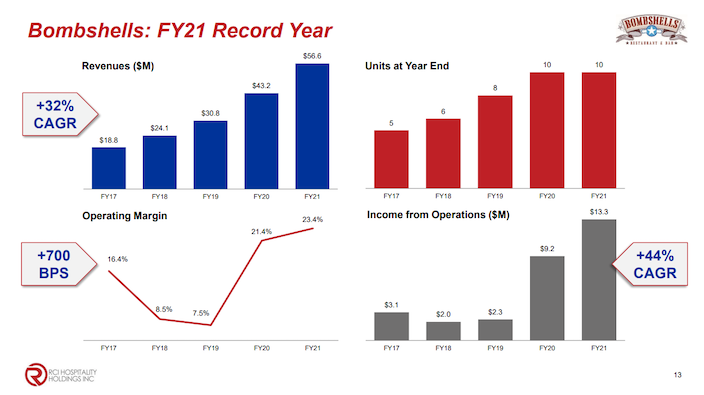 Besides the main segments, RICK also has some optionality with two digital projects they are developing: An NFT pass for its clubs to increase loyalty and win a new generation of customers, and AdmireMe, a competitor to only fans. Admire me is especially interesting due to the low capital investment( under $1 million) and its potential to cross-sell between performers in the club: Performers will be encouraged to advertise their admireMe services to offline clients and vice versa online. This could create a nice network effect with low capital at risk. 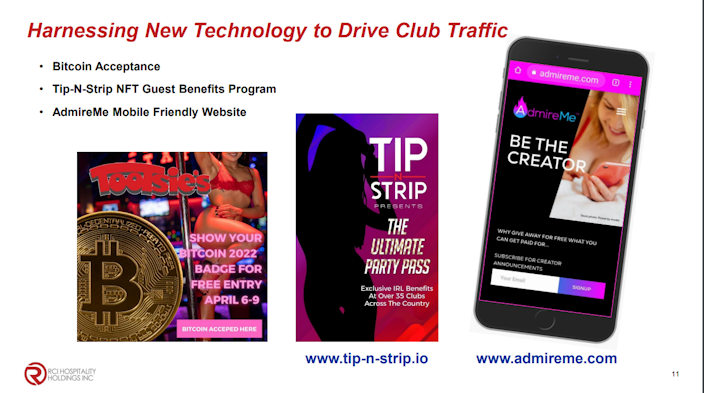 RICK went through a major transformation in the last 6 years. If I looked into the company before 2016 I would have never invested a cent into it! In 2016 a shareholder recommended "Outsiders: Eight Unconventional CEOs and Their Radically Rational Blueprint for Success" by William Thorndike to CEO Eric Langan. The book, one of my all-time favorites, is a case study on 8 unconventional CEOs that outperformed by using absolute rationality in operations and capital allocation. Eric understood the book and transformed the company. 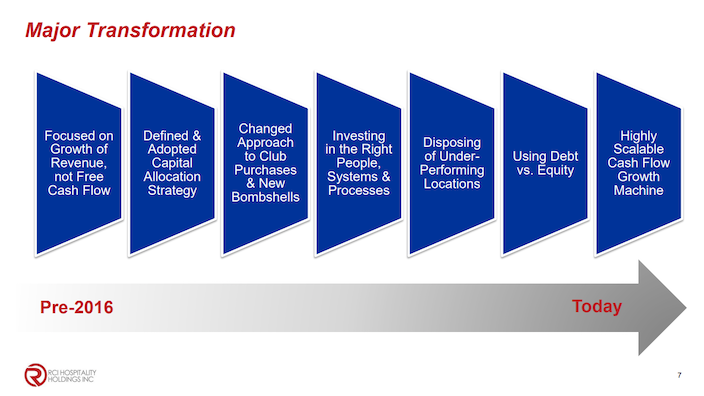 Back in the day, RICK thought it would create value by increasing revenue. By any means. This led to many poorly performing clubs and overall stagnation in Free Cash Flow. Part of the revenue maximization was also diluting shareholders. RICK then started to sell bad assets and focus on Free Cash Flow per share as its goal and came up with the below capital allocation strategy. The strategy is simple but effective: 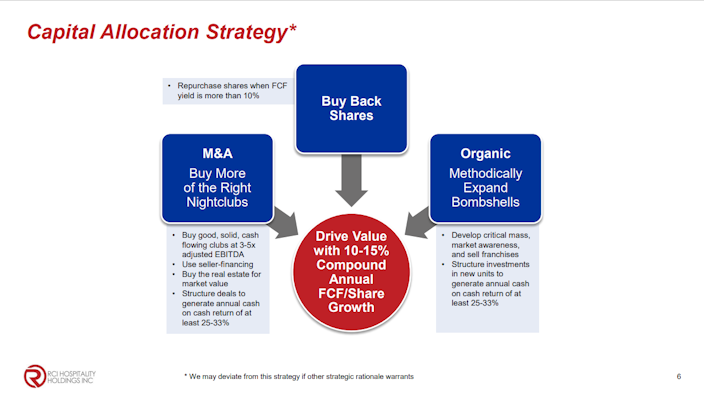 I earlier mentioned that strip clubs are recession-proof, let me elaborate on that.
Eric mentioned in an earnings call on Twitter that in a recession the clubs switch from quality customers to quantity of customers with discounts. This process takes a few months, but it keeps the business going at a similar rate.
Yesterday RICK gave an update on Q3 sales and confirmed the high end of the current run rate of $280 million. At a 32% EBITDA margin TTM (with some covid headwinds) that would leave us around $90 million in EBITDA or a 7x EV/EBITDA.
RICK also has been buying a lot of shares lately. In Q3 they retired almost 2% of shares so far (168000 shares). Since RICK has a buyback hurdle rate of 10% FCF yield and they publicly mentioned $65 per share as the price under which they repurchase, we can assume a $6.5 FCF per share guidance. 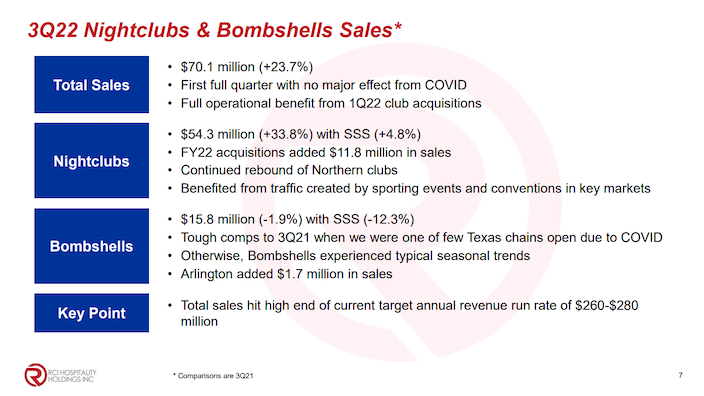 To sum it up again: RICK is a high-margin business with a regulatory moat in its main business that is led by an owner-operator(Eric owns around 8% of the company) and a management team with long tenures that deploy a smart capital allocation strategy and are trading around a 10% FCF yield. On top of that, they own a portfolio of real estate in the best locations.
What do you think about RICK? Do you know the company and if not did I manage to get your attention with this pitch? Let me know in the comments and leave a like :)
Disclaimer: I am long RICK with around 7% of my portfolio currently.

Stock Metal Investment@stonkmetalJuly 12
Author
@investmenttalk The best part about RICK is that its a pretty funny business to talk about in an investment context, but if you dive into it you notice how brilliant the unit economics are and how good the capital allocation is.

Curtis@hillbergJuly 12
Amazing pitch and write up as always!! Got to buy the tit stocks! The best stock

Dissecting the Markets@dissectmarketsJuly 12
The regulatory moat makes me bullish! I wouldn't be surprised if Buffett invested in that company.

Stock Metal Investment@stonkmetalJuly 13
Author
@dissectmarkets I would be surprised, just because of the size! $650 million enterprise value, so even if buffet would take a non controlling 45% stake, it would be drops in a bucket for Berkshires portfolio. Besides that I am sure he could love the economics on this one :D

Ben@rpinvestmentsJuly 12
Since we had quite a few investments in common I looked at the rest of your holdings. And $RICK stood out to me the most

Stock Metal Investment@stonkmetalJuly 13
Author
@rpinvestments Glad to have inspired you :) Love the big $GOOG and $ASML positions you have!

Joshua Simka@tomatoJuly 13
Hey @stonkmetal! Great work on $RICK. It's not an industry I'm familiar with and I wonder if you're aware of any similar publicly traded companies a curious stockpicker might look at to do some side-by-side comparison?

Stock Metal Investment@stonkmetalJuly 13
Author
@tomato Heye Joshua, that's the thing. There aren't any. There are private equity buyers of clubs, but RICK is the only publicly traded one and thus also the only one with access to that sort of capital (major advantage). They took advantage of that recently when they did a big acquisition of 11 clubs at once. The CEO was eyeing these assets all the way back to 2007 and finally managed to ink out a deal. One of the requirements was to include equity in the deal, because the owner wanted to remain in the industry through $RICK shares. This sort of negotiating tool (and better debt financing) are a big advantage in my opinion.

Stock Metal Investment@stonkmetalJuly 15
Author
@tomato Always happy to discuss :) Yeah its an overlooked point for RICK. That's also why the small dividend they pay makes sense, if you do use stock for acquisitions (if necessary), then people are more likely to keep the stock if they get some dividend from it I believe.

StockOpine@stockopineJuly 14
Great pitch and definitely caught our attention. AdmireMe seems an interesting project without significant CAPEX. What is the target with AdmireMe? Is it to increase traffic in clubs or to reach online customers (like onlyfans)?
What's your take on the high financial leverage used? Do you foresee any risks under the current environment (rate hikes etc.)?

Stock Metal Investment@stonkmetalJuly 14
Author
@stockopine Thanks for the compliment and the questions: For AdmireMe, it's a mixture of both. The synergies between online and offline should generate a good revenue stream and comment the two worlds. The market is gigantic with Onlyfans turning over over $2 billions TTM. If AdmireMe can capture some fraction of that then thats already a win in my books. Take rate on the platform will be 20% according to the FAQ on the site, similar to Onlyfans. Lower would be better in my opinion though for a start at least.
About debt, currently at $215 million total debt, that's net debt/EBITDA of 1.8x. Most of this debt is real estate backed, so I don't see an issue here.

StockOpine@stockopineJuly 14
@stonkmetal thanks for the insights. Effectively, AdmireMe can move the needle for the company. The -ve aspect of this company (we loved the rest) is the debt burden which can delay its growth (through acquisitions) under the current environment.

Stock Metal Investment@stonkmetalJuly 14
Author
@stockopine Yeah, it could move the needle, but I'm not betting on it. It's a nice optionality for sure with low capital investment.
RICK expects to spend $80-100 million on acquisitions in 2023, so I don't think the debt is too big of a burden since it's real estate debt and the cash flows are great for RICK.

Stock Metal Investment@stonkmetalJuly 13
Author
Edited a small error: I had the buyback hurdle rate at $55 in my article, while it's actually $65. I corrected the error (only makes the invest case more convincing though)

Leandro@invesquotesJuly 14
Great pitch! Don't own the company but all the bear vs bull spaces have been fun!

Stock Metal Investment@stonkmetalJuly 14
Author
@invesquotes Definitely have been entertaining. It's always a pleasure hearing Eric talking, he knows the business in an out....and always super entertaining when Adam Wyden(large shareholder) starts shit talking people on earnings calls lol.
Definitely a company that would tick many of your boxes :)

Stock Metal Investment@stonkmetalJuly 15
Author
@from100kto1m Haha, thank you, I hope so :D I've seen some other awesome pitches as well, so there is fierce competition!

Zack Morris@zmoJuly 18
It's a compelling pitch, and valuation. I starting doing some research on the company early 2021 after fintwit popped it onto my radar when I was considering some reopening trades, but felt like the stock had run too much by the time I got up to speed.
During that research I learned about Bombshells for the first time and was surprised I had never heard of it. Then I saw they only had 10 locations, all in Texas. I'm perplexed why this brand hasn't been able to scale more since the concept has been around since at least 2017.
Recently, I came across an interview with CEO Eric Langan from 2017 where he predicted 80-100 locations in 5-10 years. It's been 5 years since that interview and there's still only 10 locations. What's going on?
The Bear Cave recently published a report on the company highlighting some red flags. It's paywalled, but might be worth paying for if you have a material position in $RICK: https://thebearcave.substack.com/p/problems-at-rci-hospitality-holdings

Stock Metal Investment@stonkmetalJuly 19
Author
@zmo Thanks for the comment, Bombshells have been kind of slow. Early on the company made some bad choises here and had locations that weren't working. Now they got the concept right and are looking to scale it up. Covid was a big headwinds to opening new locations. Franchising is also in the works, the first franchise is opening soon and other are in talks.
About the Short report, RICK dropped 5% after the short report was announced and went up 10% after people read that it had no new information. From what I saw on twitter the main red flags where an assumption that Bombshell is bad capital allocation(even though it has 25-33% cash on cash returns with owned real estate) and that the company had some scandals many years ago before the strategy change. Laughable short report.

The Science of Hitting@tsoh_investingJuly 20
Great pitch Stock Metal, thanks for sharing!