Nathan Worden@nathanworden10/01/2020
$335.4m follower assets
The Efficient Market Hypothesis in Action
Here's an example of how the Efficient Market Hypothesis works:
Let's take a news event, say, the announcement that one company is going to buy out another. In most takeovers, the acquiring company pays a substantial premium over current market prices (this is due to the value of controlling an entire company as opposed to just part of it, as well as the value of synergistic businesses coming together. But mergers and acquisitions is for another post).
Since one would expect the takeover price of a company to be higher than the current price, the Efficient Market Hypothesis would predict that merely the news of the takeover would lift the price. And thats exactly what happens-
I plotted an approximate graph of the stock price response of a sample of 194 firms that were announced as targets of takeover attempts. 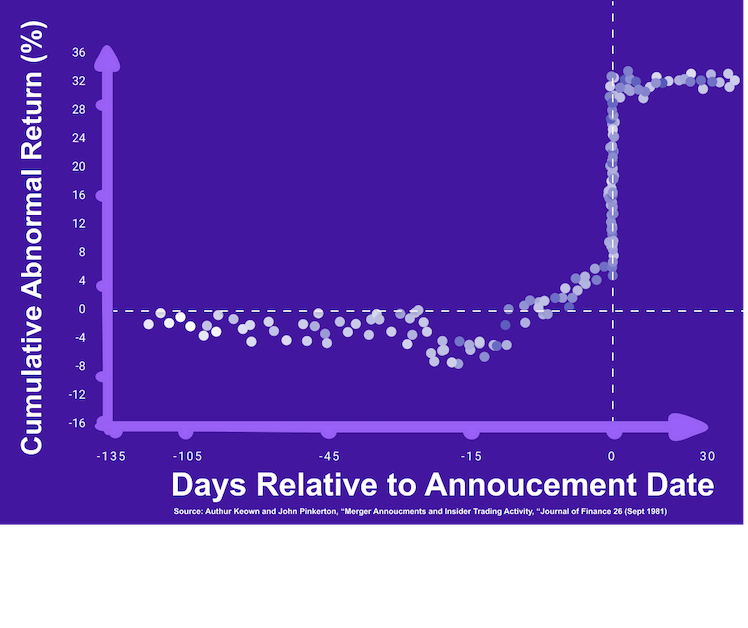 Data Source: Arthur Keown and John Pinkerton "Merger Announcements and Insider Trading Activity: Journal of Finance 36 (Sept 1981)
The graph shows that stock prices jump dramatically on the day the news becomes public. However, there is no further drift in prices after the announcement date, suggesting that prices reflect the new information by the end of the trading day.
The amount of the jump in price is equal to the likely magnitude of the takeover premium.
The key takeaway here is that you have to respond very quickly to news about an event in order to capture any value. Basically, you have to be quicker than the efficiency of the market. Personally, I don't try and play that game.
When the likely outcome of an event like an acquisition is well known, the market prices it in on the day of the announcement, not on the day that it actually happens.

Nathan Worden@nathanworden10/01/2020
Author
Another interesting thing about the graph is that just before the day of the announcement, the share price begins to slope up. To me, this looks a bit like evidence of insider trading- as people who know the announcement is going to occur start to buy the stock beforehand.