Nathan Worden@nathanworden12/15/2020
$332.5m follower assets
Why Do Companies Want To Buy DNA from Twist Bioscience?
To answer this question, let's look at one of $TWST 's customers, Ginko Bioworks. Ginko designs custom microbes and builds foundries to scale the process of organism engineering using software and hardware automation.
Here's what a Ginko foundry looks like: 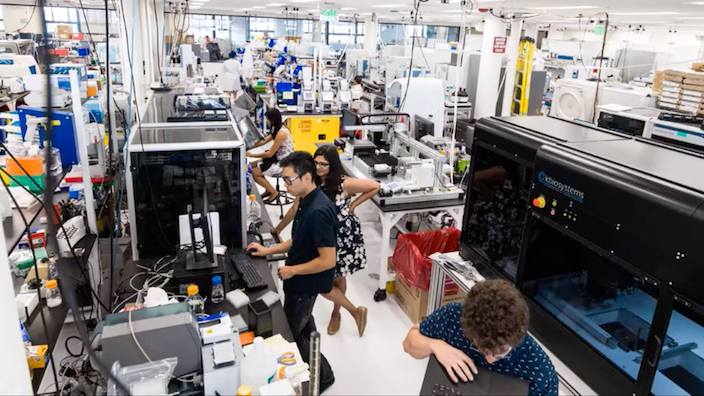 Ginko looks at biology like digital code. Information in the form of DNA can be translated into a nearly endless array of products. The challenge comes in learning how to write that code.
The process is a cycle of research: design, build, test — and repeat until a solution is identified. This takes many iterations to see what works. If you can lower the cost per iteration you have a competitive advantage over others because you are getting more 'shots on goal.'
And Ginko has been getting more 'shots on goal' as the cost per DNA base has come down exponentially over the last two decades:
1990s: $100 a base
2000: $10 a base
2009: $1 a base
2017: 25 cents a base pair
Today Twist is selling DNA at 9 cents per base pair.
Depending on how many base pairs you need, you could save as much as 75% by ordering from Twist Bioscience instead of competitors such as IDT, Genscript, GeneArt or Genewiz.
The lower the cost to design, build, and test your biological code, the more you can apply biology to smaller markets.
In the past, biology would be so expensive, you could only apply it to massive markets of drugs. If it was not a $10 billion drug opportunity, you wouldn't do it. But now that the price per base pair has come down so much, you can now apply it to new markets, such as a chemical market that is maybe only a $100 million dollar market.
Ginko's vision is to apply biology to untapped markets where we haven't been using it before.
That's why they order so much DNA from Twist Biosciences. Because their cost is industry leading, and it's opening up new markets for Ginko that weren't there previously.
Twist has it's eyes set on $0.02 per base pair because that is the point at which researchers can significantly scale experiments, and will no longer be limited by the cost of DNA.
If you want to keep learning about the DNA and gene space from an investment perspective, follow me for alerts on future memos!

Beyond The $1K Genome: DNA ‘Writing’ Comes Next | Twist Bioscience
﻿
www.twistbioscience.com
No comments yetBe the first to add your insight!