sam stribling@stribMay 17
$99.6m follower assets
Bought 38% more WISH
ContextLogic at $1.57
May 17
1 of 5
Portfolio Update
Bye Bye $Y thanks for the gains and cash to redeploy with some left over!
So I’ll elaborate on my linked trades.
$WMT got hit hard today but I like the company. I used this as an opportunity to double down into weakness. It’s in an IRA and I can’t touch this money for years so time is on my side.
$FUBO and $WISH were spec plays of mine from last year that frankly have been obliterated. However, when that happens.. I was able to cut my cost basis’ in half with very little capital so I did.
$AMZN is just a solid play and about to split. I actually dragged my basis up on that one significantly but don’t mind. Love the company and product.
Still have cash left over if this market keeps giving us trouble I’ll be looking to deploy more. 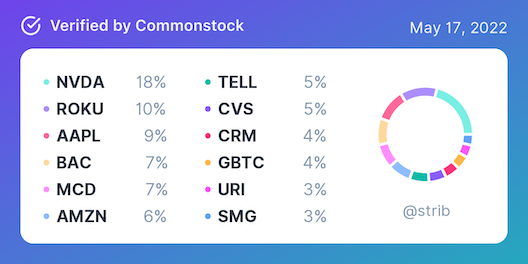 Joey Hirendernath@joeyhirendernathMay 17
Thanks for sharing Sam. My question with speculative plays like $WISH how do you cap risk ? What is your strategy to mitigate the downside?
View 3 more comments

sam stribling@stribMay 17
$99.6m follower assets
Follow Up on my $Y Position
https://commonstock.com/post/33b0a64e-8efa-4493-96ed-638eb1f7fc3b by @strib
So the poll came in at 50/50 but via the insights in the comments and wonderful feedback I have made a decision. I have decided to close my $Y position now. It greatly increased my cash on hand and I intend to redeploy it into other existing positions. I will keep you all posted with how I use the proceeds!
Thanks as always for the great feedback and advice CS!
commonstock.com

sam stribling@stribMay 12
$99.6m follower assets
Looking For Advice - New Situation For Me
So I am invested in $Y which was recently agreed to be bought out by Mr. Buffett a month or so ago for an agreed upon price of $848.02 a share. I have personally never had a stock bought out from under me like this.
My question is this:
Do I sell now or is there any advantage in waiting to hold it longer now that a buyer is in place?
50%Sell Now!
50%Hold It!
12 VotesPoll ended on: 05/14/22
Edmund Simms@valuablMay 12
Ah, ye olde merger arbitrage. Hold on for an additional $18 per share, or sell now? How likely is the deal to go through? And do you know when you'll get the money from closing?
View 14 more comments

Reasonable Yield@reasonableyieldApril 7
$16.1m follower assets
Berkshire Buys $4.2B Stake in Hewlett Packard
Shares of Hewlett Packard $HPQ, the multinational computer and printer manufacturer company, are up as high as 15% in pre-market trading hours after Warren Buffett's Berkshire Hathaway $BRK.B $BRK.A disclosed they acquired a stake in the business valued at a whopping $4.2B (~121M shares).
This purchase marks Berkshire's third multibillion-dollar investment over the last month or so, after picking up $7.5B worth of Occidental Petroleum $OXY and their $11.6B takeover of Alleghany Insurance $Y.
A quote from the Financial Times reads as follows:
"The addition of HP stock to Berkshire’s portfolio signals that Buffett is still betting on corporate America and the US economy, even as Russia’s invasion of Ukraine raises the possibility of slower global growth and high inflation.
It marked a noticeable shift by a company that had largely sat out a spate of big dealmaking over the past six years as stock valuations soared. Buffett had complained about the lack of appealing investments as recently as February, writing to shareholders in his annual letter that he and his right-hand man Charlie Munger were finding “little that excites us”."
The disclosure on Wednesday with the SEC did not indicate whether Buffett made the investment in HP himself or if it was executed by one of the two portfolio managers on his team. The two managers, Todd Combs and Ted Weschler, oversaw just under a tenth of the company’s $351bn stock portfolio at the end of 2021, but Buffett has traditionally been the one to pull the trigger on larger transactions. 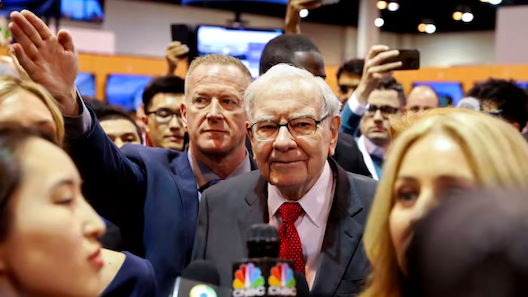 Uday@upluskApril 7
This looks like another IBM. Buying value just for the sake of it.
View 2 more comments

sam stribling@stribMarch 22
$99.6m follower assets
Portfolio Update
Seeing a lot of new faces joining Commonstock welcome and please follow me on my investment journey!
Recent news for my holdings:
Also, I'd like to repost my stock picking strategy for any new followers! 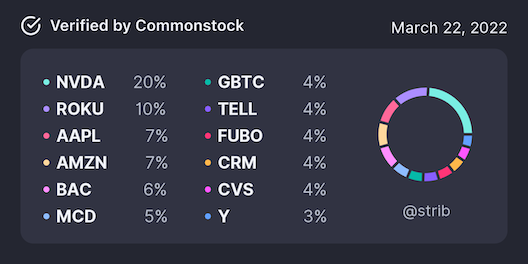 Reasonable Yield@reasonableyieldMarch 21
$16.1m follower assets
Berkshire Hathaway to Buy Alleghany for $11.6B
Looks like Mr Buffett is tipping his toes into the stock market, buying an insurer named Alleghany, a company that Buffett has apparently spent 60 years observing. $BRK.B $Y
"Berkshire said it would pay $848.02 a share for Alleghany, a premium of about 25% to Friday’s closing price of $676.75 and a multiple of 1.26 times the New York-based company’s book value at the end of 2021. Berkshire, whose operations include an array of companies including insurer Geico, said it expects to complete the acquisition by the end of the year."
Founded in 1929 by railroad entrepreneurs Oris and Mantis Van Sweringen, New York-based Alleghany operates mainly in property and casualty reinsurance and insurance through subsidiaries and investments. Alleghany was transformed from a largely railroad holding company into an insurance and investment firm by Fred Morgan Kirby II. The company's board is currently led by Jefferson Kirby.
Good article on this acquisition here. 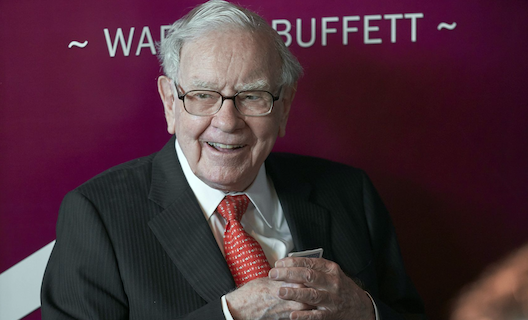 Luka 🦉@stock.owlMarch 21
what a timing for insider trading 🤔
CEO and CFO to buy shares 2 weeks ago, just before they accept Buffett offer. Shameless

Micheas
@micheas
156 days
Commonstock is a social network that amplifies the knowledge of the best investors, verified by actual track records for signal over noise. Community members can link their existing brokerage accounts and share their real time portfolio, performance and trades (by percent only, dollar amounts never shared). Commonstock is not a brokerage, but a social layer on top of existing brokerages helping to create more engaged and informed investors.