MT Capital@mt_capital14d
$11.1m follower assets
Transaction Volume (as measured by Transactions per Second) on the rails $V $MA and even with $PYPL greatly exceeds that of $BTC, $ETH & $LTC 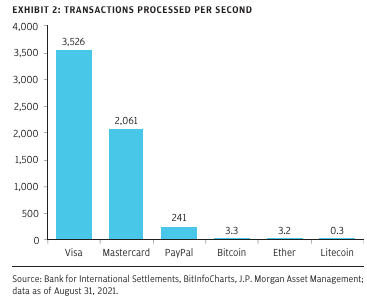 Dissecting the Markets@dissectmarkets4d
I'd be curious to see if $SOL.X can manage to process more transactions per second than $V
View 3 more comments

Dissecting the Markets@dissectmarketsMay 13
$4.2m follower assets
Credit card companies and BNPL companies are already beating inflation
What's the average interest rate for a credit card or a "buy now, pay later" loan?
For credit cards, it's 18%. For "buy now, pay later" loans, it's 23%.
Inflation is currently above 8%. Many companies' profit margins are below 8%. But for $V $MA $AXP $DFS $AFRM $SQ $PYPL etc., they're already making a lot more on each loan. Many banks envy these fintech companies.
Mortgage rates are surging, but at the same time, their rates haven't been as high as what the credit card companies and BNPL loan providers charge.
As for the % of people that pay their credit card and BNPL balances in full every month, it varies. For credit cards, it looks like 1/3 of users pay their balances in full each month. For BNPL, that number looks to be a lot lower because the credit quality of those that use BNPL is lower too. In general, the majority of their customers accrue interest in those companies. It explains why those companies are highly successful today.

Michael Szumielewski@caridinacapitalMay 11
$1.6m follower assets
AKO Capital, one of my favorite funds, reported its Q1 buying activity. Interesting buys & sells, also good to see that some are overlapping with my investments like $ADBE, $V, $GOOG and $NKE 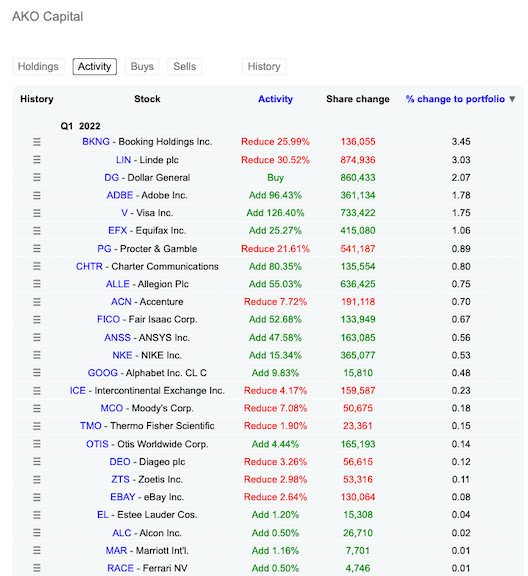 Michael Szumielewski@caridinacapitalApril 30
$1.6m follower assets
Weekly market review (week/YTD)
$SPY -3.30%/-13.26%
$QQQ -3.73%/-21.26%
$VTV -3.17%/-4.36%
$VUG -3.46%/-21.92%
$ARKK -10.16%/-50.17%
Portfolio -1.42%/-15.20%
The market closes below early March lows on some bad earnings and concerning economic data.
2022 had the worst start to a year on record for the Nasdaq. April was the worst month for $QQQ since 2008. Four down weeks in a row.
So, don’t feel bad if your portfolio isn’t doing well, it’s been a tough environment to invest in.
Lots of earnings reports this week, a lot to go through & analyze. Usually, when holding quality companies, I expect no big moves on earnings reports because of their predictability. In uncertain economic times however, this can happen, it happened and must be investigated.
When analyzing earnings, it's critical to go straight to the source. Don’t listen to mainstream media coverage. The media’s job is to get attention with dramatic headlines, not to provide you with in-depth analysis. Instead, read the report and listen to the call.
My portfolio did alright this week. Earnings impact has been balanced. Strongly negative reactions to $ALGN, $BA and $AMZN. More positive reactions to $FB, $PINS, $V and $MA. I have 17% in cash, if the market goes down next week, I will probably buy some more quality companies.
Check out my public eToro portfolio to follow all my investments:
➡️ https://bit.ly/3tn7Poy
bit.ly 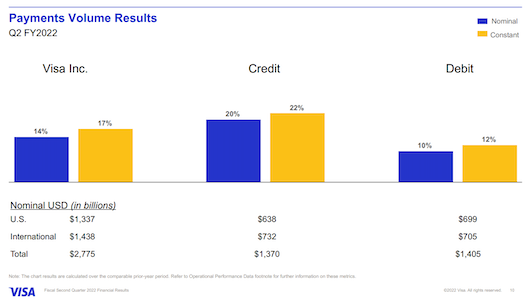 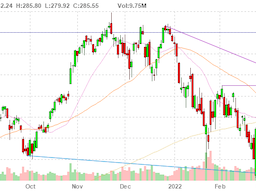 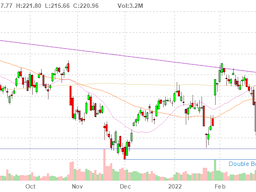 Contrarian Investor Media@contrarianmediaApril 27
$93m follower assets
Meta/FB Earnings, Pending Home Sales: Daily Contrarian (April 27)
Good morning contrarians! Stock futures are rising a day after a brutal sell-off on Wall Street. Tech saw the worst of it yesterday, with the Nasdaq down 4% to slip deeper into bear market territory. Other U.S. indexes were down 2%-plus.
Today’s issue is reprinted here in its entirety for the CommonStock community. You may also listen to the podcast here.
State of Play
As of 0620, stock futures look to rebound with major indexes up 1%. Among individual stocks, $MSFT and $V are rallying after earnings yesterday, both up 5%. Losers include $GOOG and $TXN, both down about 3%.
Commodities are mostly flat, with WTI crude up about 0.5% to trade around $102/barrel. Bonds aren’t doing much either with the 2-year yield sitting on 2.58% whilst the 10-year is 2.77%, both roughly unchanged. Cryptos are dropping again, with bitcoin off 3% to trade around $39,000.
Earnings
$FB is the main event today but that’s not until after the close at 1600.
$GSK and $BG just reported a beat of top- and bottom-line estimates. $SPOT revenues missed expectations but MAUs and premium subscribers grew by 19% and 15%, respectively. Not sure what was expected but Spotify is moving higher this morning, up 2%.
We’re waiting to hear from $KHC, $BA, and $TMUS before the market opens at 0930. After the close we’ll also get $AMGN, $QCOM, and $F.
Economic Data
Pending home sales are out at 1000. Economists surveyed expect a 1.6% drop month-over-month in March, less than the 4.1% decline seen in February. Yesterday’s new home sales were in-line with estimates, at least on the headline number.
U.S. Trade Balance is out at 0830. Last month the trade deficit was $107 billion. U.S. trade deficits are a good thing where the health of the global economy is concerned. If Americans are buying more stuff (especially stuff they don’t need) then that means factories in China and elsewhere are churning out more stuff, which means those factories are ordering more raw materials from developing markets, which makes for a healthy global supply chain. Of course there are periodic hiccups in this global supply chain, such as when China shuts down over Covid concerns as they have done recently. Not sure that will work its way into this data yet. It could.
Retail inventories are also out at 0830. Crude oil inventories at 1030. Seeing how it’s Wednesday we’ll also get MBA Mortgage Applications at 0700.
The Bottom Line
Yesterday’s sell-off was as brutal as Monday’s rally was encouraging. Lately it seems the sell-offs have more velocity than the rallies. That’s typical for a bear market. We aren’t there yet for the S&P or Dow, but we are (again) for the Nasdaq.
There doesn’t seem to have been a catalyst for yesterday’s selling either. That too is typical of bear markets. Unless acted upon by an outside force, markets take on the direction of their spirit bull (bear or bull).
If there is a sign of encouragement, it’s that the global economy looks to be in good shape
(certain supply chain issues notwithstanding). But for now stocks have a few precious days left to salvage a positive month for April. So much for it being such a great month for stocks. Consider that your reminder that past performance does not equal future results.
Meta/FB Earnings, Pending Home Sales: Daily Contrarian, April 27
Listen now (8 min) | Stock futures are looking to rebound a day after a brutal sell-off…
contrarianpod.substack.com
Joshua Simka@tomatoApril 27
Great context around the <pretty irrational> swings we've been seeing in both directions. Thank you, @contrarianmedia.
View 1 more comment

T.@theanonymousprofitApril 24
What to watch for the week of 4/25/22
Are you prepared to take on the markets this week? If not, here is a watchlist that I created of some potential catalysts I’ll be watching for the week beginning April 25th. Check out the link in my bio for a more detailed break down of how I plan to trade this week and view my other graphics.
Hopefully this graphic can help you navigate your investing and trading decisions. Feel free to save it for reference, share it in your trade groups and repost it on your social media page. Also be sure to follow me. Good luck everyone!
$SPY $FB $PINS $MSFT $AAPL $ROKU $BA $QCOM $XOM $BMY $V $ATVI $UPS $PYPL $ABBV $TWTR $CVX $JBLU $AMZN $GOOG

Nathan Worden@nathanwordenApril 24
Dang that expected price move on Roku of + or - 18% 👀
How is that calculated?
View 6 more comments

Swapnil Gugnani
@gugnani
1580 days
Commonstock is a social network that amplifies the knowledge of the best investors, verified by actual track records for signal over noise. Community members can link their existing brokerage accounts and share their real time portfolio, performance and trades (by percent only, dollar amounts never shared). Commonstock is not a brokerage, but a social layer on top of existing brokerages helping to create more engaged and informed investors.