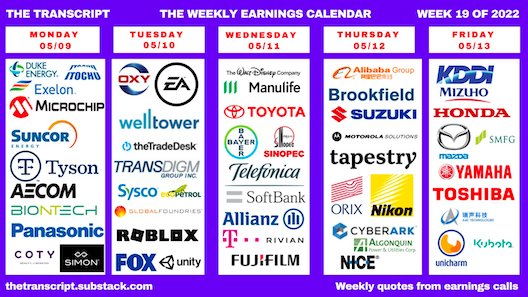 Luka 🦉@stock.owlMay 8
I am waiting for $TSN - after earnings I will sell some covered calls 😉
View 1 more comment

Dissecting the Markets@dissectmarketsJanuary 5
$3.7m follower assets
Thoughts on Toyota and Tesla’s newfound successes in 2021
The only reason why Toyota $TM was able to sell more cars than $GM in the US in 2021 was because they navigated through the chip shortage and supply chain issues better than General Motors.
Also, I’ve noticed that Toyota does more manufacturing of its vehicles in the US than General Motors and other US-based automakers (except $TSLA).
On a similar note, Tesla grew its deliveries amid the challenges that 2021 brought to the auto industry.
It goes to show that automakers that choose to produce their vehicles domestically will do better than automakers that choose to produce vehicles in foreign countries.

Paul Essen@pessen12/11/2020
$209.2m follower assets
Tesla Valuation
$TSLA market cap: $578 billion
$F + $GM + $TM = $306 billion
$UBER + $LYFT = $107 billion
$D = $61 billion
I like Tesla, but the valuation is insane. Domination of car sales and ride sharing (w/ some energy production) seems already priced in. Where else can they go?
Eric Pelnik@eric12/14/2020
SpaceX merger...in all seriousness though...I'm not sure. Your value breakdown above definitely puts things in perspective. That said, I wouldn't be the one to bet against the stock.
View 3 more comments

Dieter Bahr
@dbahr
444 days
Commonstock is a social network that amplifies the knowledge of the best investors, verified by actual track records for signal over noise. Community members can link their existing brokerage accounts and share their real time portfolio, performance and trades (by percent only, dollar amounts never shared). Commonstock is not a brokerage, but a social layer on top of existing brokerages helping to create more engaged and informed investors.