Dollars and Sense@dollarsandsenseSeptember 15
$23m follower assets
$STOR Buyout
Store Capital has agreed to be bought out by GIC and Oak Street Capital in a $14b deal.
As a shareholder its a very nice premium to my cost basis but I would have liked to see the company remain public longer.

Dollars and Sense@dollarsandsenseJuly 2
$23m follower assets
To Start The Next Half of 2022
Wanted to post this today as we head into the second half of 2022 for future reference as I am curious to see how the portfolio will change over time.
My predictions are that $INTC will slip to number three and be replaced by $CVS and $STLA by the end of the year. I also imagine $STOR will be a good bit higher and $BOC will finally make it onto the list at some point.
Also big thanks to the people behind the scenes at Commonstcok for fixing my portfolio! Some positions weren't correct and they fixed them almost immediately. Awesome team! 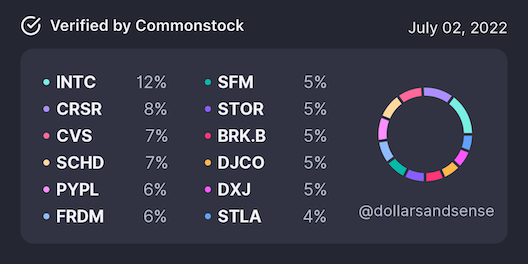 Dollars and Sense@dollarsandsenseJune 4
$23m follower assets
How $STOR Wins
STORE Capital is a real estate company, unlike many others. From the smaller deal sizes to the massive acquisition pipeline and the co-founder-based leadership team $STOR is a REIT certainly worth looking into.
STORE buys individual real estate from smaller businesses in exchange for long-term leases at a broad level. This specific approach allows the company to win in a lot of different areas.
The lease terms tend to be much longer than competitors. This is most likely due to the smaller deal sizes. Generally, the big box stores that Realty Income makes deals with tend to want more flexibility in lease terms.
Next is a cap rate much higher than competitors. Again, the cap rate is operating income divided by property cost given the smaller deals, STORE gets higher income while not spending as much on properties.
Using this business model the company has grown to over $11b in assets over the last 11 years.
While $STOR is heavily concentrated in the service industry it is still fairly diversified across that field.
STORE still manages to be incredibly diversified across its top customers. STOREs top10 accounts for roughly ~12% of the total rent. In contrast, $O's top10 accounts for nearly 20% of their total rent.
And even though most of STOREs properties are owned by smaller businesses the majority of its business comes from the larger tenants. Along with these many new deals come from these existing businesses expanding.
Overall STOREs got a lot of good things going for it. While there certainly are concerns from the sudden departure of the founder Chris Volk to Credit rating risk from their smaller tenants I believe STORE is worth the risk.
And if you want a much deeper dive into the company from its history to an expanded bull case and a closer look at the downsides it is the subject of my newest video.
https://youtu.be/W1oeLXduRLw 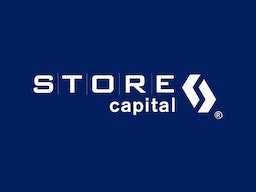 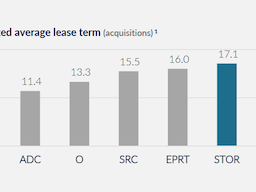 Reasonable Yield@reasonableyieldJune 5
This is my kind of venture. I am building a REIT watchlist at the moment, with the eventual aim of adding 5 to 10% of exposure to REITs sometime in the next year. This one will fit nicely into that.
Add a comment… 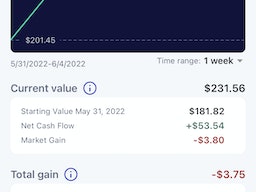 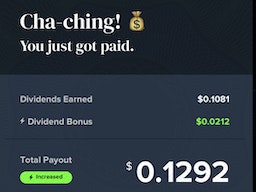 Dollars and Sense@dollarsandsenseMay 29
$23m follower assets
Portfolio Update
Really hasn't moved much but since the last time, I posted it I have sold $BMY and added $CVS as well as increased positions in $STOR and $BOC.
Although I do have a few positions that aren't showing up on the portfolio like $BOC as well as $WBD so going to have to see if I can fix that for next time. 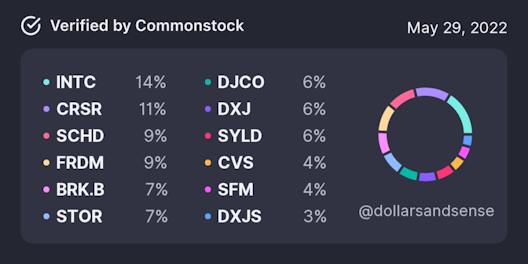 Stanley@fatcatinvestingMay 21
$18.6m follower assets
Sometimes life ...just happens.
A few Real Estate updates today covering the past couple days since I didn't update much on Thursday or Friday.
M1 Finance - 9 buys on Friday
$AMT, $CTRE, $DLR, $ESRT, $GLPI, $MPW, $OHI, $SPG, $STOR
Still running at a negative on this REIT portfolio as 'Fat Cat Investing' is currently DOWN 0.86% overall since inception.
Concreit - received my weekly dividend payment of $0.126740 on deposits of $100.94 (including DRIP).
Both are a part of my ongoing "Real Estate Rumble"
Join 'Fat Cats of Real Estate' on $FB 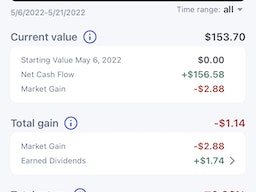 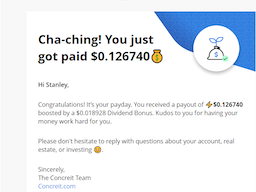 Stanley@fatcatinvestingMay 21
Don't miss @dollarsandsense excellent post regarding $MPW here - https://commonstock.com/post/76fb75d0-638a-4133-8711-136b4a4bc019 - one of my buys on Friday (purely coincidental) with special attention to the comments.
Add a comment…

Stanley@fatcatinvestingMay 9
$18.6m follower assets
Monday Madness - 5/9/22
Overall, 9 stock positions increased/added.
Additional investments into my Stash portfolio (4).
$BMBL - $35.66 consensus price target. DCA down from previous buys.
$CMPS - $73.00 consensus price target. DCA down from previous buys.
$SFIX - $12.20 consensus price target. DCA down from previous buys.
$YUM - $135.95 consensus price target. DCA down from previous buys.
None of the above, with the exception of $YUM, are core positions, I'm banking on the differential in the current share price vs the anticipated upside. Willing to hold, but will take profit when it presents itself.
Additional investments into my M1 Finance "Fat Cat Investing" portfolio (5)
$O
$ADC
$CUBE
$DLR
$STOR
Anyone familiar with M1 Finance knows how the 'pies' work, but for those that don't, once the pie is setup and weighted you have very little control, aside from adjusting percentages, in controlling individual buys. Since I added $CUBE to the "Fat Cat Investing" portfolio today, I deposited an off-schedule deposit to force a 'buy' resulting in the purchases above, as dictated by my weighting. The addition of $CUBE brings this portfolio up to 49 holdings.
The 'Fat Cat Investing' portfolio was down 3.05% overall today and is a part of my ongoing "Real Estate Rumble".
These are now "core" positions in this IRA, so unless there is a fundamental change in one of the REITS - all 49 are long term holds. 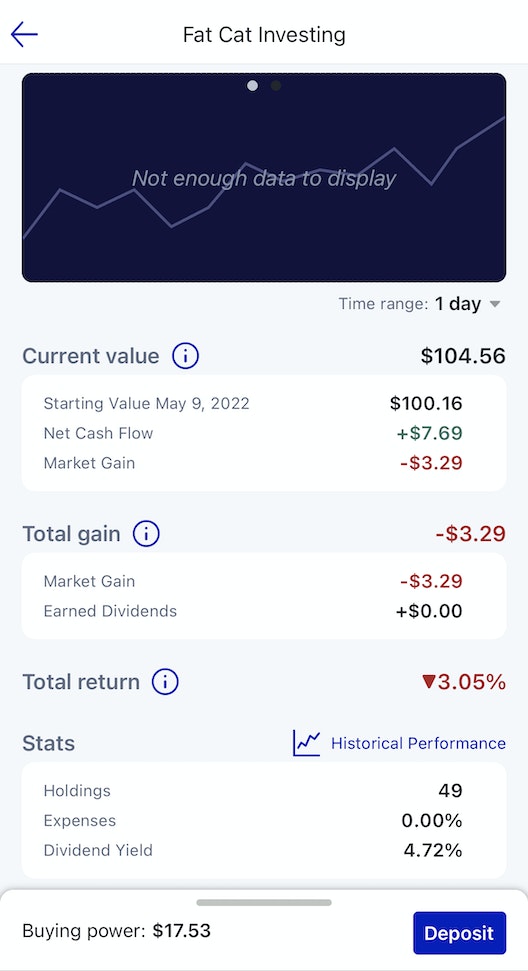 Stanley@fatcatinvestingMay 4
$18.6m follower assets
My Stock Buys for Today
My stock buys for today, doing some more DCA while the market is down. Mostly REITs today.

Going to keep an eye on my trackers see what pops up throughout the day.
AverageInvestor@averageinvestorMay 4
$ARR has been part of my portfolio for a long time and just hasn’t recovered post COVID. Sort of stuck with this position at this point.
View 2 more comments
Next