Yegor@from100kto1mJune 15
$174.4m follower assets
Spotify pops as Wells Fargo upgrades on potential for 'more profitable company' than believed by SeekingAlpha
Spotify $SPOT shares rose on Wednesday after investment firm Wells Fargo upgraded the streaming company, noting the Daniel Ek-led Spotify laid out a vision at its investor day for a more profitable company than initially believed.
Analyst Steven Cahall raised his rating to equal weight from underweight and raised the price target to $124 from $101, noting that the plans laid out at last week's investor day to boost margins, subscribers and revenue were impressive.
"Given the strength in user and revenue growth we're willing to concede some margin expansion opportunity, and give management time to execute," Cahall wrote in a note to investors, while also noting the firm increased the valuation of Spotify's (SPOT) customer lifetime value to €40 from €32.
With all that said I would be cautious today to do Fed speaking and most likely increase in interest rates
Fat Baby Funds@fatbabyJune 15
Wonder if they would’ve done that without investor day
View 1 more comment

Fat Baby Funds@fatbabyJune 13
$32.6m follower assets
Spot On: Balancing Forecasts and Reality
Check out my latest blog on $SPOT and whether they can hit $100B in revenue and 20% operating margins.
https://fatbabyfunds.com/2022/06/spot-on-balancing-forecasts-and-reality.html
fatbabyfunds.com

Irish Born Investor@irishJune 9
$16.4m follower assets
9th June 2022 - Trading Journal
Today's trading journal is brought to you by IBKR. I use them as my main brokerage for both investing and trading. As a European investor I have tried several different platforms and I can safely say they have the most comprehensive platform available to any EU based investor. In terms of platform power, safety and products (Stocks, Options, Futures etc.) You can check out the platform here.
Situational awareness:
​
Note: No trades were made yesterday 8th June 2022.
Still optimistic going into today. Market still in a tight formation with plenty of setups looking decent. CPI Numbers tomorrow will likely move the market one way or another.
​
Pre Market Work:
​
Reviewed some charts this morning. Nothing too taxing. Added $OLPX to my focus list with a nice setup on a recent IPO. In Stan Weinstein's book he describes recent IPO's being different in terms of analysis. Overhead resistance is not as important. I like the accumulation here as pointed out and the volume dry up the past few days.
I also had an interesting discussion with @europeandgi today about one of his holdings, $XOM. The stock has advanced quite a lot and we were discussing whether it would be a good idea to sell some calls against the position as a form of hedge. The stock is right at the cusp of All Time Highs. Despite being somewhat extended (Up almost 240% from Oct 2020) it is showing phenomenal RS (Relative Strength). I crudely drew what I would like to see it do to be very bullish. Essentially what I drew is a VCP Pattern (Volatility Contraction Pattern) coined Minervini but a pattern of supply vs demand that has been visible in stocks going back 100 years. It is quite noticeable in the highlighted area from 2021.
Long story short, to me, the stock is still very bullish technically and with some healthy consolidation could easily push much higher. Figuring out tops perfectly is impossible but one can use the weight of evidence to ride their winners as long as they can.
Lastly I identified $SPOT as a nice looking short setup if the market turns sour. I would consider getting short on a break below around $110. With a target of $90.
------------
Trading Day:
​
I bought $OLPX about an hour into the market today. After a soft open I saw it advancing. I have posted the Hourly chart below for some context on where I bought. Unfortunately we pulled back but it remained relatively strong until late in the day when everything really pulled back. My stop is at $13.80 so there is still plenty of space for it to gyrate.
​
End of day Thoughts:
​
The market dumped into the close. I have moved to caution. My positions held up relatively well but if the market is on not on my side then my positions will go nowhere. Tomorrow the CPI print will likely decide a direction. If we continue to dump tomorrow I will cut my positions and go back to cash.
I will be reviewing my trades somewhat. I think I might be jumping in that bit too early at the moment in terms of entry. Trying to gain that extra few cents when I should probably be waiting for more proof that the breakout isn't failing. I don't want to read too much into it considering conditions and only a few trades as sample size but it's something I am aware of.
​
Notes & Open Trades:
​

​
Please note I operate my risk with options that I can lose 100% of the premium. This is the safest way to trade them in my opinion. Even if I cut at 50% once I am setup to lose 100% within my risk threshold then I will stay ahead of my required R:R. 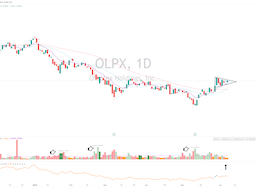 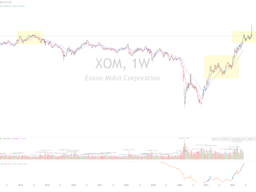 Gaurav Kotak @ Fincredible@gkotakJune 10
I actually thought some of the questions were reasonable. Very impressed with analyst day and glad to continue to hold and perhaps buy more $SPOT
View 1 more comment

Mexican Investor@mexicaninvestorJune 8
That's a MOAT!
I've had Apple Music, Deezer, and even an APK to have Spotify for free
But in all cases I decide that it is worth paying the Spotify Subscription $SPOT
Conor Mac@investmenttalkJune 8
How is that a moat? I could say the same thing, but in my experience, Apple Music is the one I pay for. Not being obtuse, just picking your brain :)
View 3 more comments

Leon@mavixJune 8
$10.3m follower assets
Platform Fairness
$SPOT was one of the first with such a deal. I think more will follow. $AAPL & $GOOGL will have to take care how much they use their Appstore duopoly. Otherwise they will attract more attention from regulators. And i think this is not what they want. #platformfairness 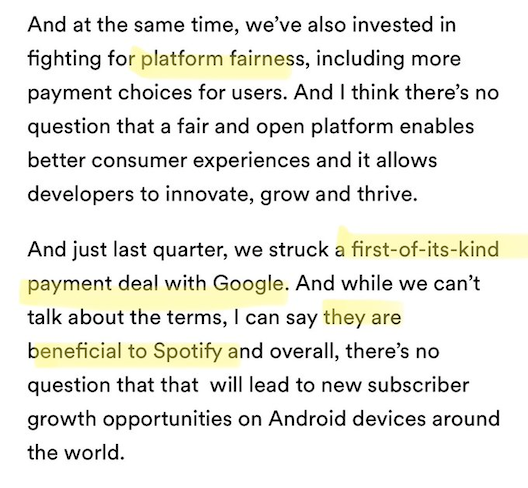 Samuel Meciar@sammeciarJune 7
$14.5m follower assets
Portfolio changes - update 11
Hey fam! I made some moves in my portfolio today for the first time in about 2 weeks.
I sold $SPOT. This one needs a background story, I believe:
So, I started using YT Music recently, just out of curiosity. I tried it out before but:
a) there were some changes made
b) I as well have evolved as an investor and see things slightly different now than say a year ago
So, where do I start? My main thesis for Spotify was mainstream adoption of audio streaming/move away from radio (at least money wise speaking when it comes to ad dollars) to platforms like Spotify. Second, it's their recommendation algorithm. And 3rd a surge in podcasts helping Spotify monetize better, improve margins etc as that's not a traffic from music where to a degree record labels have a leverage over Spotify.
And so... They are all still true to this date but let me tell you what caught my eye instead, with YT Music:

Looking at the latest data, YT does well with YT Music. YT Premium/Music now has over 50 million subscribers, reportedly growing 50% YoY, now holds about 8% market share and finds a great success with young demographics, particularly Gen Z
From my experience, it's still not Spotify level experience, but they are improving. They recently introduced this Wrapped-like review of the year, an equivalent of what Spotify has for years now and I believe there's a proper Podcast integration in the workings, remember Google already has Google Podcasts, so all they have to do is introduce it into the YT Music app. The recommendation algorithm I think is decent, I already found several new songs I added into my playlists. Some of the stuff I didn't like or wanted to be added I emailed as a feedback to devs and am looking forward to hear from them.
So to conclude. YT Music together with Apple Music I consider a nice exposure to the world of audio, and since Spotify was never a core position in my portfolio by any means in terms of conviction, I decided to cut it. Instead, I completed my position in $SNOW and added more to $NET.
Thanks for reading.
Carlos@astronautwizardJune 7
Cathie wood has been selling her full position on it as well , maybe its the right time 😁, goodluck!
View 6 more comments
Next

Robinson Eaton
@co_eq
1171 days
Commonstock is a social network that amplifies the knowledge of the best investors, verified by actual track records for signal over noise. Community members can link their existing brokerage accounts and share their real time portfolio, performance and trades (by percent only, dollar amounts never shared). Commonstock is not a brokerage, but a social layer on top of existing brokerages helping to create more engaged and informed investors.