Andy Buchanan@andybuchananJune 13
$6.2m follower assets
New position in SLNH
Soluna at $12.50
11/04/2021
The rational behind Soluna $SLNH
It's always fun to get DMs from people asking about your portfolio holdings: @wjared
Here's why I bought Soluna (not to be confused with Solana)
The thesis behind Soluna (at least for me) was to benefit from the Bitcoin and crypto ecosystem while not being exposed to Bitcoin's price.
Soluna builds bitcoin mining rigs next to renewable energy power farms.
Renewable energy has a very pesky problem of matching up supply and demand. Wind energy in particular is quite mercurial— the wind blows when it wants to blow. All too often energy is created when no one needs it and not producing enough energy when everyone needs it.
Soluna helps solve the situation when energy is being created but demand is low.
If the wind is blowing strong but the local power grid doesn't need more juice, a lot of the electricity generated goes to waste because there aren't batteries powerful enough to store the energy.
It's actually kind of an incredible problem.
Soluna builds bitcoin mining rigs right next to wind farms and buys their excess electricity for very low prices. This makes the wind farms happy because they would have wasted the electricity— now they get paid for everything they produce! Albeit at a reduced rate. But better than nothing!
And Soluna then uses that electricity to mine Bitcoin.
By reducing their energy costs, Soluna can Bitcoin more efficiently and profitably than other miners.
Soluna sells the Bitcoing they mine almost right away. The CEO of the company isn't a Bitcoin fanatic, he is on record saying he just sees an opportunity to help out wind farms while also making a profit. Bitcoin just happens to be tool.
My thesis was, since Soluna sells their Bitcoin right away, the company wouldn't be correlated to Bitcoin's price. It should be "safer" because the way they make money has more to do with the rise of wind power.
However, the market has not agreed with me. Since Soluna is a Bitcoing mining company, the market see's "Bitcoin" and trades $SLNH down when Bitcoin goes down. I think Soluna has noticed that and there is no longer any mention of Bitcoin on the landing page of their website. Instead it focuses on "selling every megawatt" of clean energy. Which is indeed their value proposition.
Here is their website:
https://www.solunacomputing.com/

Andy Buchanan@andybuchananJune 13
By the way, you can see from my trade chart that I bought in November of last year, which was pretty much the top of the market for equities. Bad timing all around. @wjared 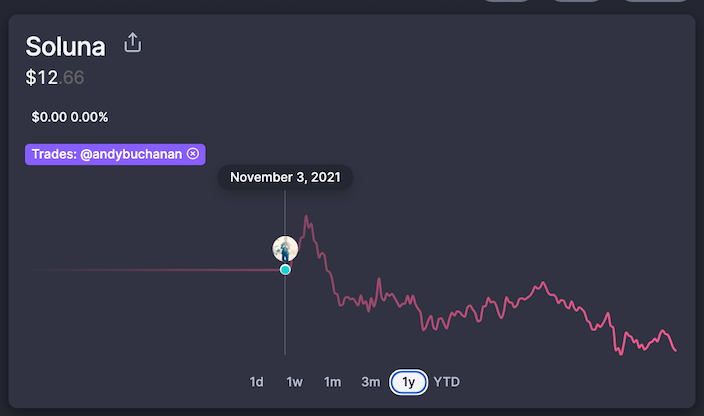 Chris Tolvkin@tolvkin11/29/2021
$113.9m follower assets
Bought SLNH
Soluna at $12.52
11/04/2021
1 of 3
Favorite Trade Actually in November
(My Tesla Trade was on Oct. 31st, so for a trade actually in November, I choose Soluna Holdings)
For people who complain that Bitcoin is bad for the environment, look into what $SLNH is doing. They find renewable energy plants where 30% of their output goes to waste because it can't be stored. Soluna sets up Bitcoin mining rigs right next to the wind and solar plants and uses the cheap energy to mine Bitcoin.
https://commonstock.com/memo/dfa3f763-6e5b-4e6b-a054-d8e59f637063 by @pat_connolly
commonstock.com
Ayesha Tariq, CFA@ayeshatariq11/29/2021
Seems like quite an interesting company. Will definitely put it on the list to research!
View 4 more comments

Andy Buchanan@andybuchanan11/08/2021
$6.2m follower assets
New position in SLNH
Soluna at $12.50
11/04/2021
Commonstock is Full of Alpha
I read @pat_connolly's memo and watched the referenced video a couple of days ago. Did some further research and bought a starter position in Soluna $SLNH.
Not Solana (the crypto). Soluna Holdings, (a company).
They operates modular data centers that eliminate wasted energy and deliver revenue to renewable energy producers. (They do this primarily by mining bitcoin).
Up 17% since I bought it, but am planning to hold it for at least a year. (Maybe even add to it if we hit a down cycle in Bitcoin and all the miners drop.)
Here's the memo:
https://share.commonstock.com/8ut692Hy1kb 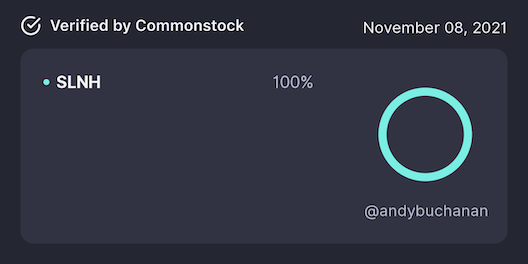 Andy Buchanan@andybuchanan11/08/2021
Also, this isn't my only holding. My main broker isn't able to be connected to Commonstock.
View 3 more comments

Pat Connolly@pat_connolly11/04/2021
$119m follower assets
Meeting with the CEO of $SLNH
Yesterday I had the pleasure to hop on a call with @nathanworden ,Ross Klein (CIO of ChangeBridge Capital),and David Bastian (Twitter @ kingdomcapadv ) as we spoke with Michael Toporek,the CEO of Soluna Holdings.
You can view the conversation here on YouTube
Soluna Holdings is a company focused on mining Bitcoin
but in an ESG friendly way. Soluna exclusively partners with renewable energy producers to power their mining rigs. The relationship between the energy producers and Soluna is actually very symbiotic as Soluna purchases excess energy that is produced. Energy producers of all sorts typically produce more energy than they can sell but are unable to store this energy and at the end of every day it gets wasted. Up to 30% of energy produced can be wasted. Soluna offers energy producers a solution by agreeing to purchase their excess energy and return Soluna benefits by sourcing cheap electricity to power their mining rigs, which is a competitive advantage relative to other miners. Soluna scales by building new data centers on the sites of the energy producers from which they buy power.
My main takeaways:
MKTY is now SLNH
www.solunacomputing.com
Nathan Worden@nathanworden11/04/2021
Very fun to get to be part of this conversation!
Kind of amazing that with the push for green energy, we don't have good enough technology to store that energy at the end of every day.
Up to 30% of energy produced being wasted is a mind-blowing stat. Makes sense that Soluna can create a win-win by buying cheap energy that would be wasted anyway.
View 10 more comments
Next

Justin
@thisjustin
112 days
Commonstock is a social network that amplifies the knowledge of the best investors, verified by actual track records for signal over noise. Community members can link their existing brokerage accounts and share their real time portfolio, performance and trades (by percent only, dollar amounts never shared). Commonstock is not a brokerage, but a social layer on top of existing brokerages helping to create more engaged and informed investors.