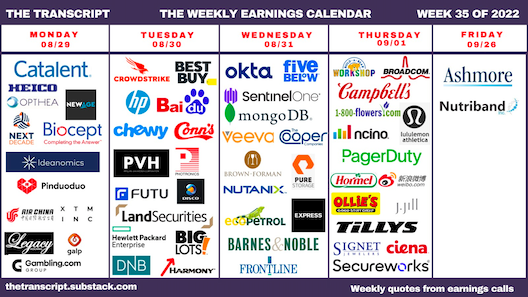 Abstract Investor@abstractJuly 19
$15.4m follower assets
Pure Storage - Under The Radar & Seemingly Undervalued
I mentioned previously that I really like sales acceleration on the Income Statement. It often translates to analysts underestimating on forecasts and a stock potentially surprising to the upside with momentum and rallies. Well, here's something interesting.
​
PureStorage ($PSTG) is a hardware and software provider for flash storage in data-centre applications. Apparently, the addressable market has been growing rapidly for flash-based storage, and these guys are some of the best in the game, providing a marriage of hardware and software that performs optimally, and efficiently; above the competition.
Gartner recorded them as an outright leader in the Primary Storage space in 2021.
​
As it happens, sales have been on an accelerating trend over the last few quarters:
​
​
Note the Q4 seasonality as contracts are loaded around Christmas. On a YoY % basis, the last four quarters have recorded:
​
Either way, sequential growth between the latest Q4 and Q1, was less negative than it has been historically, and the growth rates are pointing up again. And on valuation:
​
Source: Koyfin
​
A P/FCF of 15.6x going by the Last Twelve Month figure. I mean, really? That's it? I'm assuming that cash will moderate, but the company is still delivering on a balance of growth and cash together.
​
While there's some cyclicality to such a business, there's also a semblance of niche industry leadership, and a secular growth trend to follow. This looks outright undervalued for what it ought to be. To add to that, have a look at the latest sales surprises vs. consensus:
​
Source: Koyfin
​
In cases of sales acceleration, both management and analysts tend to be conservative in their forecasts. In fact, the forecasts almost always hug the guide, adding virtually no value for short-term catalyst traders. This information disparity could be an opportunity!
​
It's worth investigating and I'll be diving deep into this one. Initial due diligence has been positive. Storage and flash, especially for data centres, is something that I believe is NOT going to slow down substantially even in a recession. This is central, critical stuff for the modern enterprise. 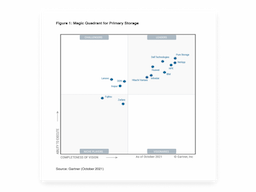 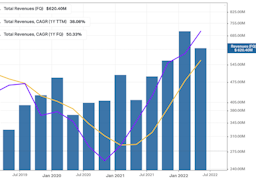 Alberto Wallis@awallis11/19/2021
$22.8m follower assets
Upcoming Earnings Calendar, Nov 22-27
A very light earnings week up ahead. I'm mostly interested in Zoom $ZM. I think the stock's valuation is starting to make some sense if they can continue growing their paid user base or adding other features. I'm also interested in seeing what Best Buy $BBY has to say about the consumer demand for electronics and some comments on supply chain issues.
Remember, if you'd like an easier way to track earnings dates, you can automatically sync your portfolio's earning dates to your personal calendar with just a couple of clicks here.
Monday
Tuesday:
Wednesday:
Thursday:
Friday: 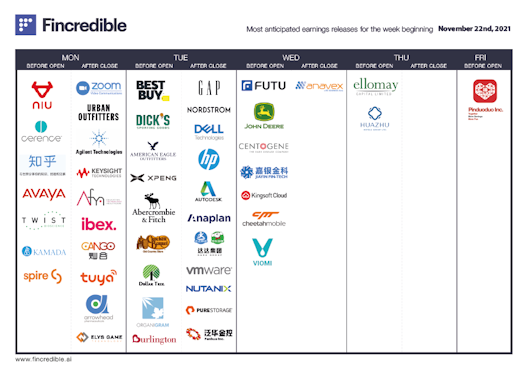 Jacob K Thomas@jacobkt22511/19/2021
Why would two companies announce on an American holiday when the markets not open, then why would you announce on the day after a holiday, when it's a short trading day. Some companies just make wonder about commonsense.
View 1 more comment

Darwin Mendoza
@_za
986 days
Commonstock is a social network that amplifies the knowledge of the best investors, verified by actual track records for signal over noise. Community members can link their existing brokerage accounts and share their real time portfolio, performance and trades (by percent only, dollar amounts never shared). Commonstock is not a brokerage, but a social layer on top of existing brokerages helping to create more engaged and informed investors.