Michael Szumielewski@caridinacapital1d
$18m follower assets
Google improving its shopping experience 🛍
At its Search On event today, $GOOG announced a number of new shopping-related features that include visual shopping, personalization and buying with the help of trusted reviews.
IMO, Alphabet is feeling the heat from $AMZN. Amazon’s ad business is a big success which generated $8.76B in the second quarter alone, growing +18% from a year earlier. More and more people are using Amazon as their primary search engine for shopping, not Google.
Thus it isn’t surprising to me that Google is focusing more on improving the shopping experience at its search engine. Maybe even an acquisition of a shopping discovery site like $PINS would make sense in the future.
$GOOGL 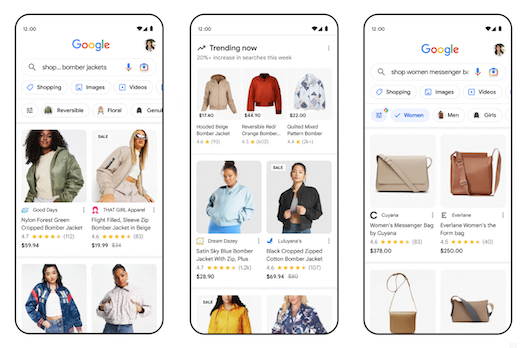 Rihard Jarc@rihardjarc22h
Yes indeed. $GOOGL needs to keep the market share of the e-commerce vertical. it's far too important in the online world for them to lose it.
Add a comment…

Leandro@invesquotesAugust 5
$130.9m follower assets
$PINS Q2 earnings in review!
I decided to write a post about Pinterest's Q2 earnings.
Earnings were nothing spectacular but they weren't bad either, considering the overall ad tech environment.
Without further ado, let's get on with it!

When it comes to the headline numbers, Pinterest managed to slightly beat top line estimates but missed bottom line expectations by a fair bit.
In Q1 the company already announced it was entering an investment year, and that's obviously showing up in the numbers:
Global MAUs beat expectations despite showing a Y/Y decrease (flat sequentially). We'll talk a bit more in detail about MAUs later:

Q2 revenue grew 9% Y/Y to $666 million, missing management's guidance of $680.4 million. There was slight revenue headwind (1%), but not even then Pinterest would've been able to meet its guidance:
There's nothing impressive in the top line but if we zoom out and see where Pinterest was pre and post pandemic we can see that there was a substantial pull-forward.
The company has managed to grow revenue at a 3-year 37% CAGR, which is not bad:
Growth came from large advertisers and shopping ads. Shopping ads are those that are optimized for conversion and typically carry promoted products.
As Piinterest is characterized for the intent of its user base, shopping ads are core in the investment thesis.
Across geographies, revenue growth came in directionally as expected (less mature markets growing more). Europe appears very weak, but there's a 12% revenue headwind
Management didn't disclose revenue headwinds in "Rest of world" but we have to assume it was also significant:

MAUs decreased Y/Y but were flat sequentially, this is a good sign that users might have bottomed.
However, even though the user base appears to be static, it's dynamic and it's improving in quality. Let's see why.
Web MAUs were down 30% Y/Y due to Google SEO changes, but mobile MAUs were up 8%
This has been the trend for several Qs now and, even though we don't get the exact numbers, we can assume that the 433 million MAU now carries a larger proportion of mobile users.
Why is this important? 80% of impressions and revenue comes from mobile app MAUs so the user base is slowly but steadily shifting to higher quality users (i.e., more monetizable). Web users were important from a user acquisition POV, but not from a monetization POV.

ARPU grew 17% Y/Y and it was surprising to see that US & Canada ARPU was the same as in Europe despite it being more mature.
Why is this happening? The answer lies in MAUs.
US & Canada lost more users (many of which we can assume to be web users that are not monetized), so the denominator in ARPU was lower without impacting too much the numerator. MAU loss was a tailwind for US & Canada ARPU.
To "solve" for this tailwind, I calculated ARPU with constant MAUs (this is, the users from Q2 2021) and arrived at the following numbers:


Now it makes much more sense, as growth was a function of market maturity. "Rest of the world" ARPU remains very low but the company launched idea ads in Japan, Colombia, Chile and Argentina. There are plenty of users in "Rest of the world" MAUs that Pinterest is not able to even monetize yet!

2022 is an investment year, but strangely so, margins expanded last quarter. In Q2, however, the company made some catch up on investments and margins contracted significantly:
On an adjusted basis the company was still profitable, although margins contracted significantly there too:
SBC increased once again and made up a significant portion of revenue:
This, however, enabled the company to continue to build cash at a fast pace. Cash flows showed a slight improvement year-over-year:

The new activist, Elliot Management, issued a PR after earnings and it doesn't seem like an immediate sale is upon us:
There seems to be a focus on profitability, though. Bill Ready, the new CEO, said that margin expansion would be back in 2023 after this investment year. Will this impact growth? Difficult to tell now, but there's clearly room for increased efficiency.
What I like about this is that, thanks to its $2.3 billion cash position, Pinterest can continue investing this year despite the headwinds. Doubt many competitors of its size can do the same.
Management also said that they are looking for alternatives to Google SEO to acquire users. The two things that were mentioned were:

The company now has 1 billion products in its shopping inventory. It has been increasing fast thanks to the shopping API which has improved significantly over the last months.
Companies can now upload products and update them in real time.
Bill Ready made a distinction that I liked between online buying and shopping, I'll leave it here:
As you think about sort of where digital commerce has been, I think the first 20-plus years of e-commerce were really solving for buying more than shopping. I know what I want, how do I get the cheapest and fastest? And as you've seen consumers shift their behavior through the course of the pandemic, I think you're now seeing that the majority of shopping sessions now start in a digital environment, regardless of whether they complete online or in a store.
So in that world, where the consumer is looking to engage in a digital manner across not just their e-commerce purchases, but a broader set of purchases, I think the way that they have engaged in shopping in the natural world, which involve much more discovery and inspiration and is much more visual, I think, just naturally plays to the strengths of Pinterest as a product and a platform.

Management expects revenue growth in the mid-single-digits. It's yet another acceleration which can be attributed to the following (in order of relevance):


If you liked the earnings recap please consider following, upvoting the post and commenting your thoughts! 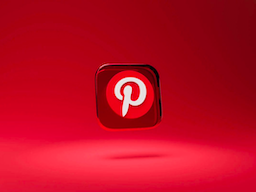 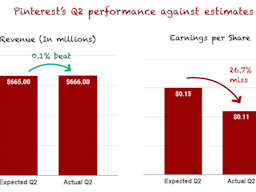 Conor Mac@investmenttalkAugust 5
Have you ever sold PINS since holding?
View 1 more comment

Josh Kohn-Lindquist@jorykoAugust 2
$24.3m follower assets
My Portfolio: 08/02/22 -- A Battle for 2nd
With $SHW (of all stocks) bombing after earnings and $PINS (of all stocks) jumping, my 2-4 spots are jostling around.
Pinterest, $TDOC, and $ME scare me allocation-wise, but not enough to sell any yet.
Which allocation scares you the most?
33%Pinterest
5%Unity
50%Teladoc
11%23andMe
18 VotesPoll ended on: 08/05/22
Steve Matt@interrobangbrosAugust 2
I hold $U also and it definitely isn't too dramatic to say the $IS acquisition will only bolster or break the thesis. If management can't pull this off, it'll be major dilution with nothing to show for it. A massive setback and a loss of trust in the executives in my book. However, a successful integration could cement Unity's place as an industry-leader.
View 2 more comments 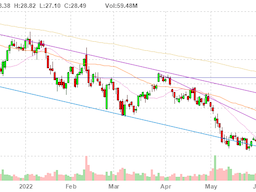 Joshua Simka@tomatoAugust 3
$CELH is just on 🔥 (and I'm kicking myself for not picking up any when I was looking at it around $40), $ROKU making a little comeback since last week's report, and a surprising report for $UBER!
Add a comment… 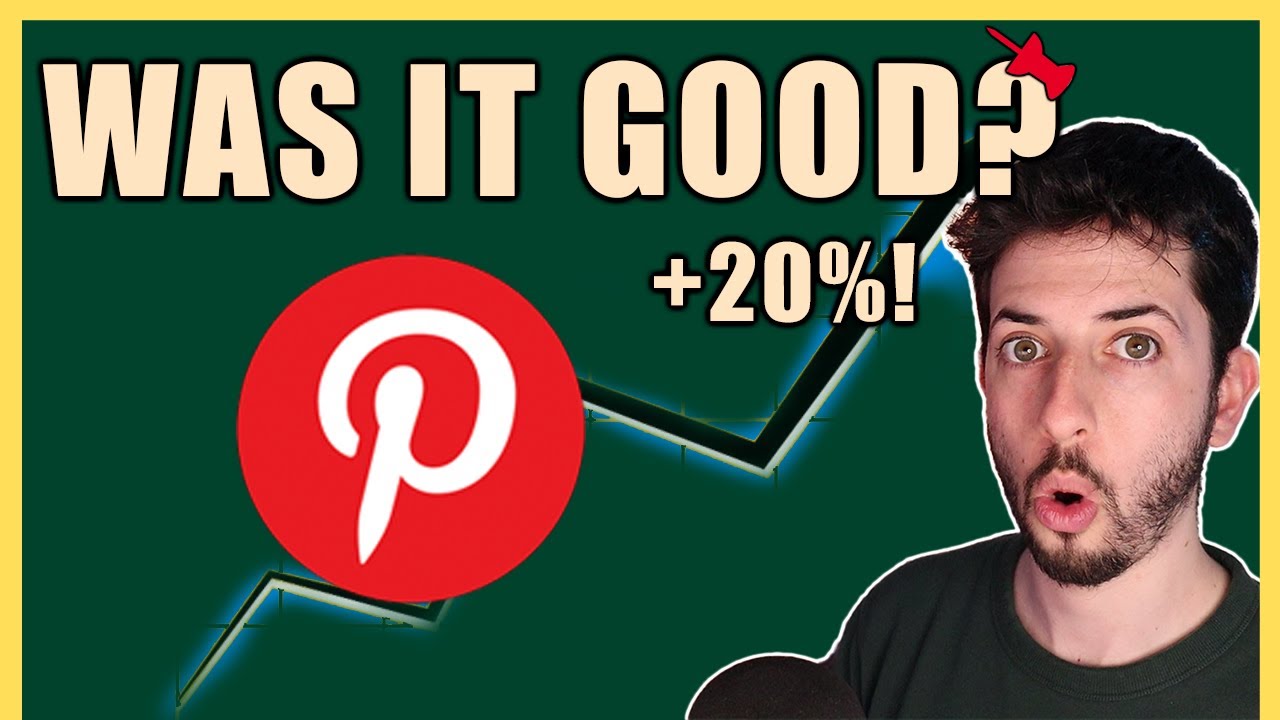 Why Pinterest Stock SOARED After Earnings Reporting? | PINS Stock
In this video, I will go over Pinterest's (NYSE: PINS) Q2 earnings report and talk about all the current and future product developments the company is worki...
YouTube
Sidni Standard@sidnistandardAugust 2
I've been hearing so many great things about $PINS from a user perspective across TikTok. Many are saying that it has the potential to surpass instagram in usage (maybe they're getting a bit carried away, but this is one of the takes that I heard). There's a ton of people who are excited about the monetization opportunities on Pinterest, so the stock soaring doesn't surprise me at all!
View 7 more comments

Michael Szumielewski@caridinacapitalAugust 1
$18m follower assets
Earnings this week
After a crazy earnings week, this one is less intense. Still, there are a few companies from my selection and portfolio reporting:
Mon: $PINS
Tue: $SPGI $PAYC $IDXX
Thu: $ZTS $PCTY $BABA $HUBS
What are you looking at?

Nathan Worden@nathanwordenAugust 1
Baba will be interesting as a bellweather for China.
View 3 more comments

Dollars and Sense@dollarsandsenseJuly 27
$23m follower assets
Elliott Management Back At It with $PINS and $PYPL
Recently Elliott has once again resumed its shareholder activism this time with two very interesting companies.
$PINS a business I have wanted to see get acquired for some time has had a rather large stake bought by Elliott.
This comes not too long after long time Founder/CEO announced he was stepping down and former Google employee Ben Ready would be taking his place in hopes of driving e-commerce growth.
While I am sure Elliott has the expertise to help Pinterest form an effective plan I think the activist investor has a different plan.
Elliott also disclosed a stake in $PYPL yesterday. While the official story is Elliott wanting to help cut costs I think, again, there is a different story here.
Back in October Paypal said they were in talks to acquire the platform. These talks fizzled out quite quickly and no deal was reached.
I definitely don't think Elliott would take rather large positions in these two companies in particular without some sort of ulterior plan.
Of course, I could be, and probably am, crazy and Elliott really does just want to help both of these stellar companies get even stronger, even if it is separately.
Still interesting its these two companies at the same time. 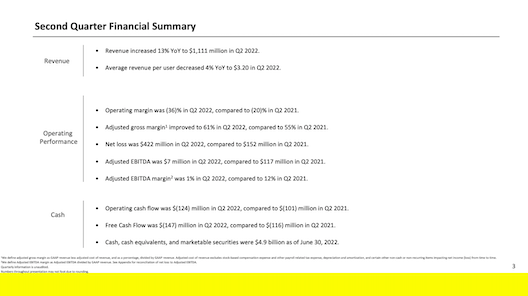 Rihard Jarc@rihardjarcJuly 21
$SNAP always craps the bed for other ad platforms. But a lot of the times so far it was not industry related but $SNAP related...
View 12 more comments 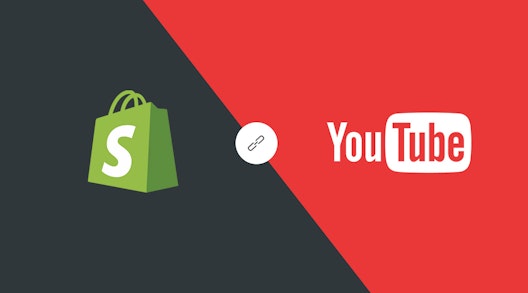