Dissecting the Markets@dissectmarketsAugust 17
$19.8m follower assets
$WMT earnings highlights
Looking at both Walmart and Sam's Club merchandise highlights, I gain a better gauge on which retail niches are doing well and which aren't.
Here are Walmart's quarterly merchandise highlights:
And here are Sam's Club's merchandise highlights:
From looking at the two brands, here are a few highlights we can gather:
Overall, this earnings report makes me slightly bullish on $NKE $VFC $FL $DKS $JNJ $ABT while making me bearish on $WSM $BBY $ETD $RH $W $YETI $MLKN.
Being the bellwether of the retail sector, $WMT tells us what consumers are shopping for and what they aren't in the market for. 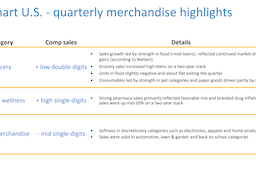 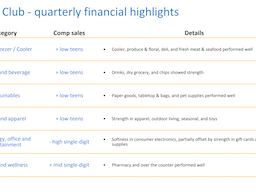 Conor Mac@investmenttalkAugust 17
When you say you are bearish/bullish on these adjacent companies, is that more of a short to medium term outlook?
View 5 more comments

Pete Nikolai@levmoinvestingJuly 29
$23.7m follower assets
📈 Do you have a backtested algorithm so you know when to invest aggressively--and when not to?
The second of three obvious speed bumps we experienced during the 2009-2021 bull market happened during July 2015-February 2016 when a series of events created uncertainty and market turbulence for several months.
The events included the end of a phase of quantitative easing by the U.S. Federal Reserve, slower than expected GDP growth in China, a substantial decline of the Chinese stock market, the devaluation of China’s currency, a substantial fall in petroleum prices, the Greek debt default, a sharp rise in bond yields, and the announcement that the UK would hold a referendum on whether to remain in the European Union (which eventually led to their infamous Brexit).
This chart compares the loss in value of $10,000 invested in the S&P 500 from July 22, 2015, through February 12, 2016, with the loss in value of $10,000 invested using the Optimum Mix during that same period.
The market as represented by the S&P 500 struggled to gain a foothold and was down nearly 14% during the eight months from July 2015 through February 2016.
The Optimum Mix fell 25.4% during the July 2015-February 2016 period as it continued to invest in high-momentum large cap stocks while also switching a portion of the portfolio from leveraged equity ETFs to a leveraged bond ETF as directed by the black swan event indicator.
The Optimum Mix then switched that portion from the leveraged bond ETF back into leveraged equity ETFs after the end of the black swan event which helped it recover quickly and go on to substantially outperform the market in the months following the turbulence.
The strategic takeaway for this period and other speed bumps, corrections, and bear markets is to “cover your assets.”
The time to develop an action plan for the inevitable temporary setbacks is before they begin.
We must learn from the past to prepare for the future.
Any questions or feedback?
$UPRO $TQQQ $FNGU $MA $HD $NKE 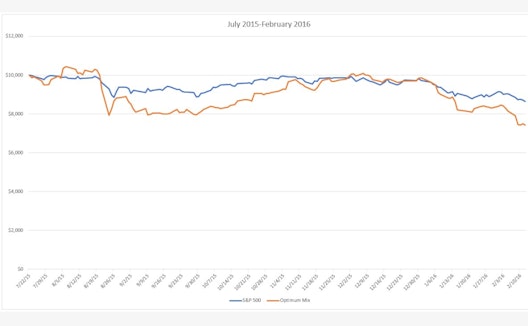 Pete Nikolai@levmoinvestingJuly 26
$23.7m follower assets
📈 Leveraged Momentum Trading Update for Optimum Mix
Momentum has weakened for $NKE and $MA so I placed the appropriate orders.
Any questions or feedback?

Pete Nikolai@levmoinvestingJuly 25
$23.7m follower assets
📈 Optimum Mix target allocations--weekly update
Momentum for stocks and equity ETFs was weak as of July 18, 2022, when the most recent issue of the Leveraged Momentum Update newsletter was sent, so the Optimum Mix target allocations changed to the following based on a $10,000 total balance:
cash: $10,000 x 87.5% = $8,750
$MA: $10,000 x 6.25% = $625
$NKE: $10,000 x 6.25% = $625
The 3-year total return for the Optimum Mix was 446.04% as of that date.
The next Leveraged Momentum newsletter/trading is tomorrow so click here today to subscribe to the FREE newsletter.
Click image to see larger image of complete list of strategies with their 3-year total return rates.
Any questions or feedback? 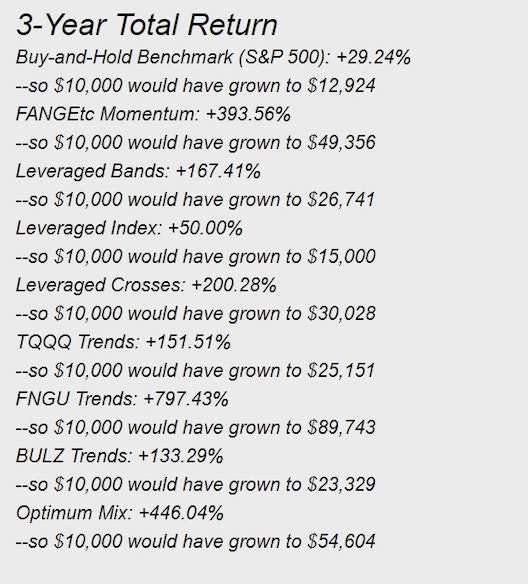 Pete Nikolai@levmoinvestingJuly 21
$23.7m follower assets
📈 Do your feelings about your investments follow the roller coaster ride of the market?
The bull market of 2009-2021 had three obvious speed bumps along the way.
Speed bumps tend to develop around black swan events (unexpected events with severe impact) which create fear and uncertainty and tend to cause consumers to buy less and investors to sell stocks and equity funds.
Eventually the issue is resolved and consumers and investors resume their normal activities.
The first of three obvious speed bumps happened during July-October 2011 and has become known as the Debt Ceiling Crisis.
Markets reacted negatively when the credit rating for United States sovereign debt was downgraded by Standard & Poor’s for the first time in history.
This chart compares the loss in value of $10,000 invested in the S&P 500 from July 26, 2011, through October 4, 2011, with the loss in value and then growth of $10,000 invested using the Optimum Mix during that same period.
The market as represented by the S&P 500 fell 17.94% from July 26 to October 4 in 2011.
In our hypothetical backtest, the Optimum Mix actually grew 1.48% during that same period by continuing to invest in high-momentum large cap stocks and by switching a portion of the portfolio from leveraged equity ETFs to a leveraged bond ETF as directed by the algorithm.
The Optimum Mix backtest switched back into leveraged equity ETFs after the end of the black swan event.
Those tactics helped the Optimum Mix recover quickly and go on to also substantially outperform the market in the months and years following the crisis.
While the Optimum Mix showed better performance by the end of the crisis, the leveraged equity ETFs caused the Optimum Mix to fall more quickly than the S&P 500 during the initial weeks of the crisis before those leveraged equity ETFs were exchanged for the leveraged bond ETF.
The strategic takeaway for this period and other speed bumps, corrections, and bear markets is to “cover your assets.”
The time to develop a plan for volatile markets like the one we are in now and the Debt Ceiling Crisis of July-October 2011 is before they begin.
History doesn't repeat itself, but it often rhymes (Mark Twain).
We must learn from the past to prepare for the future.
Any questions or feedback?
$UPRO $TQQQ $FNGU $MA $HD $NKE 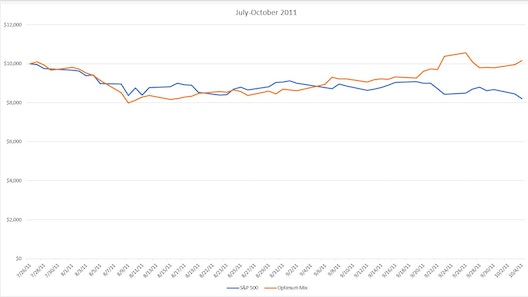 Pete Nikolai@levmoinvestingJuly 19
$23.7m follower assets
📈 Optimum Mix Trades - Weekly Update
Investing using the Optimum Mix from Leveraged Momentum grew my account balance from $1,047,000 to $1,797,000 since June 30, 2020.
The FREE Leveraged Momentum newsletter is sent every sixth day the NYSE is open for trading and provides all the details needed to get started and maintain over time including specific, quick, and easy trades.
Invest just 10 minutes less than once per week reading the short newsletter and placing simple trades to align part of a portfolio with the updated Optimum Mix and accelerate your progress toward financial freedom.
The next regular Leveraged Momentum newsletter/trading day is July 26.
Click here for link to list of actual trades placed since January 1, 2021, on my primary account using the Optimum Mix.
Every day is a good day to pursue your goals and dreams but the time required can be minimized to allow you to live an abundant life!
Any questions or feedback?
$UPRO $TQQQ $FNGU $MA $NKE 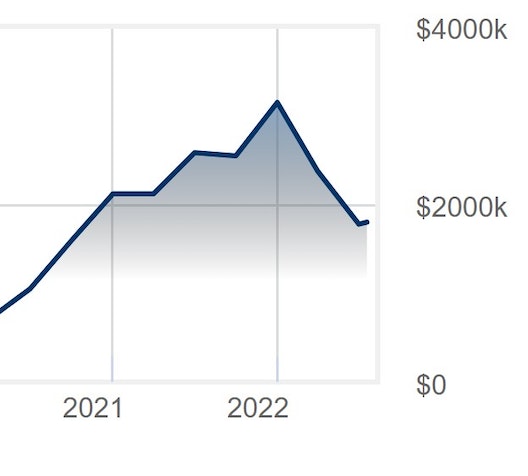 Dollars and Sense@dollarsandsenseJuly 18
$23.2m follower assets
Single Stock ETFs
Recently a relatively new fund manager called AXS Investments launched a slew of new ETFs. These aren't like traditional ETFs though as they allow you to make bets for or against individual stocks.
$TSLQ is probably going to be the most well-known. This ETF allows investors to short Tesla $TSLA without actually buying puts. Instead, the fund holds contracts ranging from a day to a year that offers a 1x inverse exposure to Tesla. The expense ratio is an insane 1.15% but given the daily nature of the fund, I assume most investors won't hold on for very long.
Some of the other funds launched include:
$PYPS A short fund against PayPal
$PYPT A long fund for doubling the return of PayPal
$PFES A short fund against Pfizer
$PFEL A long fund doubling the return of Pfizer
I think you get the picture. Currently, there are 10 total funds ranging from $NVDA to $NKE. The most interesting one to me though is $TARK the 2x ARKK Innovation ETF. Offering double the performance, both up and down, of $ARKK.
To me, the concept is kind of gimmicky and I would be surprised if many of the funds actually got much traction. It is also funny to me the SEC warned against these ETFs saying they are not for beginner investors.

Pete Nikolai@levmoinvestingJuly 18
$23.7m follower assets
📈 Leveraged Momentum Trading Update for Optimum Mix
Momentum has weakened for $NKE and $MA so I placed the appropriate orders.
Any questions or feedback?

SLT Research@slt_researchJuly 18
$17.3m follower assets
July Idea Competition $LULU
Following up on our brief analysis of $LULU as part of the CS "Buy The Dip" idea competition we wanted to share with you a pretty recent article from The Motley Fool on why you should favor $LULU over $NKE. https://www.fool.com/investing/2022/07/04/nike-lululemon-which-stock-buy-right-now/
Also including the following link in case you haven't read our "Buy The Dip" post or simply missed it: https://commonstock.com/post/5afb0517-31ba-424a-8d48-5bb6df6ca556
commonstock.com

Kevin kong
@kevkonger
909 days
Commonstock is a social network that amplifies the knowledge of the best investors, verified by actual track records for signal over noise. Community members can link their existing brokerage accounts and share their real time portfolio, performance and trades (by percent only, dollar amounts never shared). Commonstock is not a brokerage, but a social layer on top of existing brokerages helping to create more engaged and informed investors.