WiijiiApp@wiijiiapp6d
Coinbase Earnings Preview
While Bitcoin $BTC is down 15% in the last five days, Coinbase $COIN is down 40%!
Today Coinbase reports earnings, with analysts expecting $0.17 in earnings-per-share (EPS) on $1.48B in revenue. Let's see how this crypto giant stacks up with some competitors!
It isn't easy being a fintech stock! Each of these businesses are 70% or more off of their 52wk highs with $COIN down 80%. Unlike the rest of the stocks in this comparison, $COIN generates huge net income margins of 45%! These are higher margins than Microsoft $MSFT, which we have added to the chart.
Bears will argue that $COIN is just an exchange and will eventually have margins similar to $NDAQ and $IEX. To their point, $COIN's margins have dropped heavily from a high of 59% to 34%. This is still roughly double $IEX and $NDAQ at ~18%.
Bulls will argue the valuation is too cheap to ignore. To their point, $COIN trades at a trailing earnings multiple of 3.7x, but slower growth estimates suggest a forward earnings multiple north of 20x.
What is your take on Coinbase?
50%Bullish
50%Bearish
18 VotesPoll ended on: 05/11/22
Joey Hirendernath@joeyhirendernath6d
I feel like Coinbase's revenue composition is coming from increasingly unstable assets.
View 1 more comment

Jacob K Thomas@jacobkt225May 5
$7.5m follower assets
$NDAQ down 5% right now, that's a rough day. Is this how it felt in 2000 and 2001?
Rihard Jarc@rihardjarcMay 5
We are in really crazy market conditions right now. Daily moves like this on no new news...
View 3 more comments

Dollars and Sense@dollarsandsenseMarch 13
$2.3m follower assets
$SAMG is under talked about
Silvercrest Asset Management is an investment firm that manages money for over 1,000 high-net-worth individuals and institutions. With an AUM of $25.1b, this company has some of the most consistent revenue growth I've ever seen. It almost mimics that of $ICE or $NDAQ.
I think the company is especially interesting given management's comments from a few months ago about how they intend to have less of a focus on growing their dividend and shareholder payout. Instead, they are going to seek to grow their top-line revenue and possibly seek more M&A opportunities.
$SAMG already has an impressive dividend as it is. With a yield of nearly 4% and a payout ratio of only 35%, $SAMG is still an incredible opportunity from an income investor perspective as well.
Granted the company is still quite small at a market cap of just $175m I still think it's worth looking at given how little I have seen it talked about anywhere. 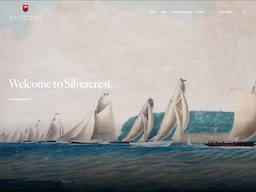 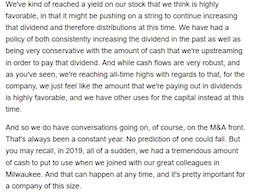 Conor Mac@investmenttalkMarch 13
Thanks for putting this on my radar!
View 1 more comment

Josh Kohn-Lindquist@jorykoFebruary 8
$8m follower assets
25 for '22
This year I plan to build out more significant positions in these 25 stocks - partially due to lower prices, but primarily due to long-term mega-trends supporting each.
Curious if any of these looked terrifyingly bad (or good) to you all?
$ABNB $DOCU $ZM $PINS $AXON
$GOOGL $SHOP $ETSY $U $ASML
$TTD $TWLO $NDAQ $MELI $SE
$CPNG $ROKU $SOFI $GLBE $UPST
$RBLX $KNSL $VEEV $TDOC $ADBE
ParrotStock@parrotFebruary 8
Solid list, I expect that you will do well over the long term. Best of luck.
View 3 more comments

sam stribling@stribFebruary 1
$98.6m follower assets
New Month, New Market?
In my opinion, the Tech Wreck has been leading the market down so I have been watching the $NDAQ via the $COMP.X and I’m going to go out on a limb here and say that we might be in the early innings of a comeback. One of my favorite indicators, the MACD, is as oversold as it’s been since we tanked in March 2020. Now, I want to temper expectations on this comeback as we are in a different world than we were then. The market rocketed after hitting the March lows because we had the Fed on outside. This time we do not. That said, a comeback is not impossible and I’m hoping it can come to fruition. A slow and steady recovery would be the best way to regain our footing. Let’s hope we can pull that off!
Don’t dive in head first but if you have some cash on the sidelines start picking up some of these beaten down names 50% or more off their highs and wait this out!

If you'd like an easier way to track earnings dates, you can automatically sync your portfolio's earning dates to your personal calendar with just a couple of clicks here.
MON:
TUE:
WED:
THU:
FRI: 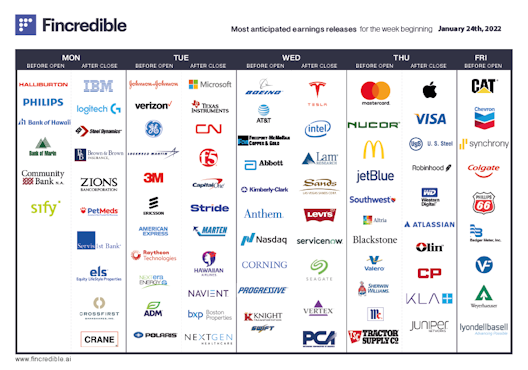 Joey Hirendernath@joeyhirendernathJanuary 21
👀 definitely an exciting week ahead! I am interested in $AAPL $MSFT and $JNJ
Add a comment… 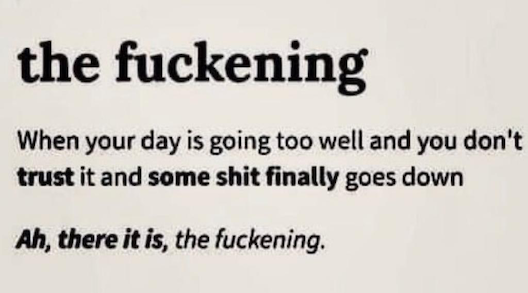 Michael Panebianco@tecantra11/22/2021
$7.2m follower assets
Even without today, I suspect the forewarned correction is here.
There was a lot of talk in late September through October about an impending 10% retracement of the markets before the calendar year ends. Still being new to trading, I'm a sucker for some fear and doubt and I've been keeping an eye out for possible signals of this happening.
The VIX
I wrote a memo back on November 8th about how the VIX was suggesting an increasingly bearish stance by institutions (tl;dr VIX going up = bad) and it (VIX) looks to have worsened.
The VIX has been unable to break below the support (red dashed line) and enter into new lows, and, despite the failed resistance break a few weeks ago, has very strongly closed above it today. It's most recent relative low, shown by the yellow square, is higher than the previous low, and it almost looks to be forming a cup-and-handle which suggests that volatility will continue to increase.
Index/ETF Chart Patterns
All 3 of my benchmarks have been showing bearish chart patterns and indicators
The $NDAQ tried to break above the resistance of its trading channel, failed and dropped back in, then wedged/flagged upward. Today was...today.
$SPY looks virtually identical.
Oddly, the $DIA appears to be a few days ahead of the other two in that it looks to have flagged and then broken downwards before the other two (yellow square). It's also forming a downward flag/wedge, which you'd normally expect an upward move from, but it's a lone bull lost in a sea of bears at this point.
The RSI is also showing some very clear bearish divergence for both the $NDAQ and $SPY, but I've not shown that so that it's more clear how the volume is acting...
Distribution Days
@chasinggreatness made a great post here where he spoke about 'distribution days', and using that concept and Chris' definition, we can see the $SPY and $NDAQ shifting both volume and price. While the Dow Jones didn't strictly have a distribution day by the same definition, the cascading volume of trades over the past few weeks suggest that we're in for more of the same.
My Plan
Fucked if I know.
I've never been in this situation before and not really one I foresaw. My strategy dictates that, when a daily loss hits a particular threshold, all positions are closed (to realize any remaining gains) and I take at least a week away (to ensure my emotions don't cloud my decisions); after-market action has me within $21 of that threshold.
A part of me (a fookin' huge part of me) wants to jump the gun and close everything. I've been moaning about the VIX for almost a month now and all 3 of my benchmarks are showing miserable signs. But, only a single trade hit SL today ($CHWY had so much promise, and still does) and none of my open positions are breaking the parameters or reasons for entry.
My head is having a hard time choosing between:
My gut, however, is screaming at me to wait. After all, it's only the first day of this supposedly legendary trading week, and there's apparently also something called a 'Santa Rally' to look forward to in December?
Besides, if everything closes and I walk away with a financial loss, it's only a 'real' loss if I don't learn from it - I sure as shit won't ignore the indices and my analysis next time. 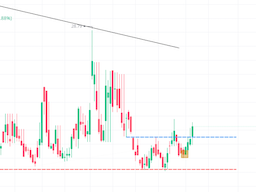 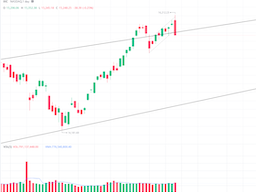 Nathan Worden@nathanworden5d
Just wanted to revisit this post six months later and point out you had pretty good intuitions about the coming correction.
@tecantra I think you would get along with Preston @investorinsight both of you are adroit at Technical Analysis.
View 6 more comments

Nathan Worden@nathanworden11/20/2021
The crazy thing is that if the Nasdaq starts falling too, these names you listed will probably continue to fall more 😬
View 4 more comments

Radhika Malik
@radhikamalik
230 days
Commonstock is a social network that amplifies the knowledge of the best investors, verified by actual track records for signal over noise. Community members can link their existing brokerage accounts and share their real time portfolio, performance and trades (by percent only, dollar amounts never shared). Commonstock is not a brokerage, but a social layer on top of existing brokerages helping to create more engaged and informed investors.