I think the board can only hold off Alta for so long and am interested to see how this plays out through 2022.
Starbucks ($SBUX): Howard's first act as CEO was to axe the share repurchase component of Starbucks' $20B capital program. Share repurchases were expected to be ~2/3 of the total allocation, and with $3.5B already used, one wonders what the extra $9.5B is going to be used for. He remarked that it would be used to "invest more into our people and our stores" but with CapEx for store count growth already accounted for, I suspect he is actually signalling that the cost of labour is going to increase at Starbucks. No doubt, because of this unionisation battle they face.
Nevertheless, these are short-term (and by short term I mean 2-3 years) headwinds for Starbucks. It may no longer be a vessel for beating the market, but it's still an income-investors delight. With an expected dividend increase coming next quarter, I plan to continue adding whilst the turbulence thunders on.
Dollar General ($DG): A recent dividend hike of 31% was pleasing. Dollar General now pays 55 cents per share in dividends each quarter, up from 42 cents. At 18.1K units (up from 12.5K units in 2015, and 9.4K in 2010), I believe there is still ample room for growth across the United States. Having shown consistent mid-single-digit YoY growth in store count over the last decade, as well as firm revenue per store growth, I can see a future where there are as many as 28K locations across the States before we begin to ponder saturation. In 2010, the average Dollar General store was expected to earn ~$1.4M in sales each year. T
Today, that has advanced to $1.9M, up 36% despite a 93% increase in total units. That tells me this business box model is highly efficient and will continue to be scalable. Whatsmore, DG have shaved ~32% of their outstanding share count over that period and continued to pay dividends. The potential of DG's retail concept stores, Popshelf, which management opined could reach 1K stores by 2025 (currently projected to hit ~200 by end of the year) is exciting. Is a recession coming? I have no idea. Can DG survive a recession and continue to pay dividends? I am confident they can.
Other News
In other news, I expect to be adding ~£5K per quarter for the remainder of the year, meaning the value of this portfolio should reach between £30K and £35K at the year's close. The following year, a further £20K will be invested, and the year following that, and the one following... you get my point. This project will take a number of years before it starts to kick out some meaty dividends, it will also take a number of years before it grows to any reputable size. Such is the nature of Dividend Growth investing. I have other, more active, investments, to keep me busy while I grow this portfolio.
I thank you for following me on this journey. That will be all for this month.
Thank you,
R.Y 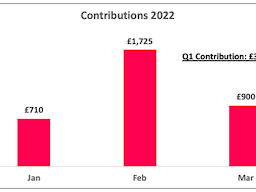 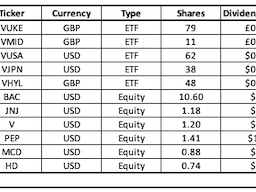 Eric Messenger@wall_street_deeboApril 5
I’m mostly a dividend guy. I’ll have to share a few of my spreadsheets with you. Nothing too detailed, just a nice starting spot. I started with dividends aristocrats, so it’d include kings. Then added metrics that were important to me. The dividend yield (least important for growth, more important for current income), 3 & 5 year DGR, payout ratio, div amount, current price, 52 week low, and 52 week high, consecutive years of dividend increase, industry, sector, and P/E ratio. I really need to add about 12 more columns and have two master spreadsheets. With dividends and without. Because I’m looking at EV/EBIT & EV/EBITDA more now. But I added rules to give best cells Coker’s, for every category. It’s basic; green is go, yellow is slow down, orange a little more cautious, and red is usually a no go. Helps me easily find great dividend stocks with long term stability and track record, good dividend, growth, low payout ratio, double digit DGR, fairly valued, and trading off 52 week highs (I’m value not momentum). Recent addiction was $TROW. $LOW and $CINF we’re a close 2nd and 3rd.
View 4 more comments

Reasonable Yield@reasonableyieldMarch 2
$32.3m follower assets
My Watchlist: 03/02/22
Here are a few of the names on my Commonstock watchlist: $AAPL $ALLY $COST $MGP $O $HSY $CINF $JPM $WMT
Does anyone have any thoughts on the below from a dividend perspective? Or just from a regular point of view? 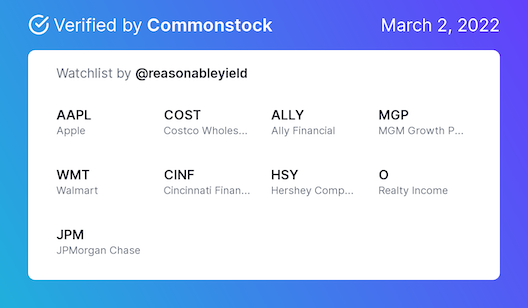 Joey Hirendernath@joeyhirendernathMarch 2
Would have been lucky to buy $HSY during the Dip. But I guess time in the market beats timing the market. 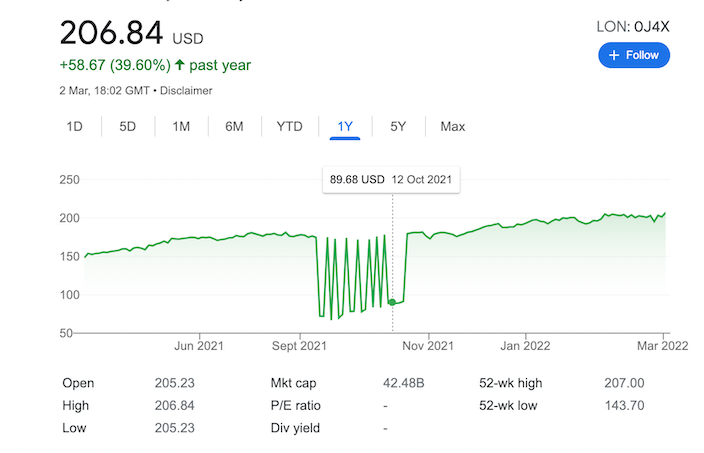 Sam
@investingchef
1901 days
Commonstock is a social network that amplifies the knowledge of the best investors, verified by actual track records for signal over noise. Community members can link their existing brokerage accounts and share their real time portfolio, performance and trades (by percent only, dollar amounts never shared). Commonstock is not a brokerage, but a social layer on top of existing brokerages helping to create more engaged and informed investors.