Invested Thought@investedthoughtSeptember 8
$1.5m follower assets
Space SPACs and "The Kindness of Strangers"
Warren Buffett stated in the 2008 Berkshire shareholder's letter, "We never want to count on the kindness of strangers in order to meet tomorrow's obligations." Analyzing the potential reliance of firms on the future kindness of strangers can be a good method to gauge resilience as we enter a period where fresh capital will likely be harder to come by. Already, broad-based declines across newly public (ex. $MAXR, which went public in 2009) space companies hints at a lack of enthusiasm for parking capital in more speculative ventures.
So, how likely are these firms to rely on other people's money to drive growth?
Pretty likely. Most firms seem to be in a somewhat precarious situation with little cash available for growth capital. Planet Labs ($PL) is the notable exception; interestingly, of the four companies above, all except Planet remain in the relatively early stages of building out their planned constellations.
(I excluded $MAXR as it is a more mature business with ~$1.7 billion in TTM revenue. Maxar holds $2.2 billion of debt on its books and only $15 million in cash.)
Additionally, as these firms invest in their future, they are burning significant amounts of cash relative to reserves. For such early-stage ventures, it's difficult to assess the return on these investments, but it's worth understanding which firms will likely need to tap capital markets to fund ongoing investments. (Below numbers reflect the most recent quarter's financials.)
From these numbers, $PL stands out as a particularly resilient operator. At the current quarterly cash burn rate, Planet can last 51 quarters without accessing additional capital. The pace of investments will almost certainly ramp up, but it's a useful reference point. In comparison, at current quarterly run rates:
Again, I excluded Maxar due to the different profile of the business, but the company is already highly levered at 8.5x net debt / EBITDA less capex. Under the same analysis, $MAXR would also have less than a quarter of cushion, but it is less relevant as it has historically been cash flow positive on an annual basis.
This is not an exhaustive analysis by any means, but it's interesting to view the difference in financial condition among companies investing to gain share in the same markets. 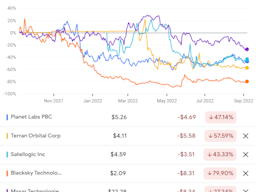 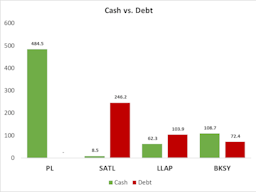 Joshua Simka@tomatoSeptember 9
Great post on space SPACS. I do own $SPCE... any reason you didn't include it here? (Alas, I'm not sure they'll be around much longer either.) Another area currently seeing a "lack of enthusiasm for parking capital in more speculative ventures" is biotech.
View 1 more comment

WiijiiApp@wiijiiappJuly 25
DEFENSE!
The aerospace and defense sector is one of the few sectors in the green today after the Department of Defense announced additional security assistance for Ukraine.
$LMT $RTX $MAXR $NOC $GD $LHX $TDG
These companies have had slow growth over the past year but increased defense spending
would help boost their top-line results.
Most of these stocks also pay a decent dividend!
You can see more visual comparisons between these stocks in a single click by selecting "defense" from the list of sectors on our home page! 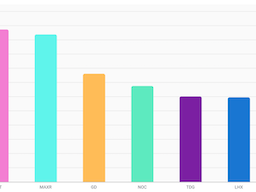 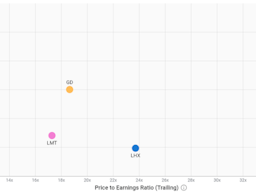