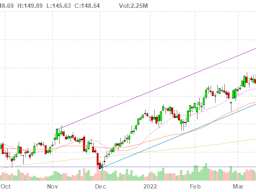 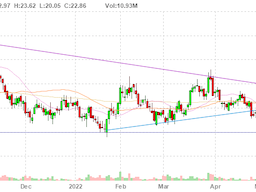 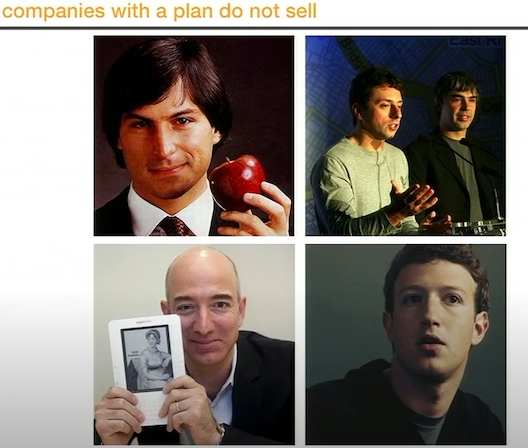 Investor from Nepal 🇳🇵@investor_from_nepalApril 18
$93.7m follower assets
Bought 5% more U
Unity Software at $84.71
March 11
1 of 2
I sold all of $IS in 50% loss
On March 11th, I sold all of my $IS stock in my ROTH IRA to buy $U.
I have worked with $IS and $U as mediation partners, publishing partners and as external developer. Both of them have different unique features.
I love $U for its non-digital ads aspect, although it's getting better with adTech. $IS has a really stable product in terms of mediation.
So, why did I sell $IS in 50% loss?
Sometimes you exit out of a position to enter into an investment with better opportunity. Although, $IS was a good company down due to external factors, I think $U at $84 was quite a bargain. I also have a higher conviction on $U's success than in $IS. For that matter, I am more bullish on $APP than on $IS in adTech as well. So, I decided to take a loss in $IS and add more of $U.
In future, if I find $U in more lucrative valuation I might sell $APP to add more of $IS.

Investor from Nepal 🇳🇵@investor_from_nepalMarch 17
$93.7m follower assets
Exited out of $IS and bought more $U
I took a loss on $IS to buy more of $U and here are the reasons:
$IS has more matured mediation platform than $APP and $U. However, $APP - has more diverse game company portfolio (IS is focused on hypercasual as of now), with the acquisition of MoPub and MAX they have good chance to be the leaders in mediation and $U is the first choice for interactive content creators. Although new mediation platform, it seems promising. Off all three companies, I have higher level of confidence in $U. So, I sold $IS to buy $U. 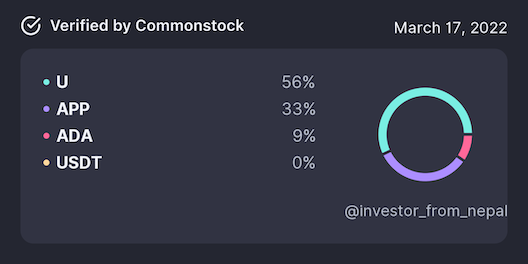 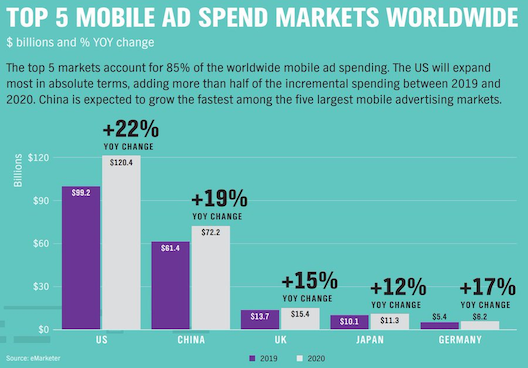 Investor from Nepal 🇳🇵@investor_from_nepal11/09/2021
$93.7m follower assets
Why $U is going to the moon in this past months?
As you know I am a $U bull and makes my heart melt when it goes up. But, we have to be logical and see what factors are pushing it to the moon.
🚀 $U to the Moon!!!
As presented in the screenshot below, $U has been growing rapidly in last month alone. It grew by 20%+ while at the same time $SPY has grown by 7%.
🤔 So why is $U going to the Moon?
I think there are two major points that helped $U soar in last month.
👉🏽 Unity Multiplayer Services: Unity's Multiplayer Service is the easiest way to set up real-time, networked games for Unity. So basically developers can make changes to their multiplayer games across all platforms at once. So, it has huge potential to save time and attract developers using custom or other game engines. ✅
👉🏽 Unity Mediation: So with releasing of Unity Mediation in Unity Ads - developers will be able to run ads from different network at once from Unity Ads. This will help all parties involved.
I see this being a huge positive for Unity if they can grow and maintain it properly. With this, in future, they will be able to compete along $APP, $IS against the likes of $GOOG and $FB ✅
💎 What's next?
Tomorrow is the earnings call for $U, let's see how it goes. My estimate is it will still produce negative EPS as we have seen releasing of new products and no real significant changes to finances (as per news).
For trading, $U is trading at premium and I don't want to buy it right now. I will however diamond hand $U that I bought a while ago when it dropped to $80. 🤘🏽
EAT. SLEEP. UNITY. 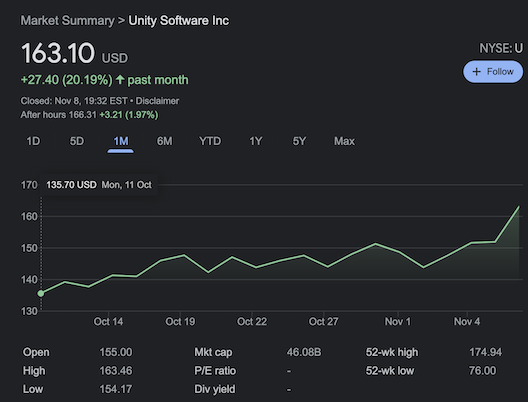 Sidni Standard@sidnistandard11/09/2021
Thank you for posting this 🙏🏾
I’ve been seeing a bunch of people mentioning $U on here, but never from this perspective. I can deff see how this can play into the metaverse and even many of the decentralized gaming platforms!!
They need to link with $MANA.X $SAND.X $AXS.X (if they’re not working with/on those partnerships/creators already)!
View 1 more comment

Investor from Nepal 🇳🇵@investor_from_nepal11/01/2021
$93.7m follower assets
Multibagger ROTH IRA: update #2
I started my Multibagger ROTH IRA on September 8th, 2021. It consists of three stocks that I think will go 10x+. It consists of $U, $APP, and $IS.
Now it's been around two months and we have gotten decent returns from the stocks for 2 months with 20.55%.
While $SPY returned only 1.85% at the same time.
Beating the market is sexy, but we need to know if it is logical and makes sense or not. If it's not logical or doesn't make sense then I might have to reconsider selling it.
Why did the portfolio grow?
The growth of the portfolio is not driven by the good earning reports as Q3 reports are pending. I think both $IS and $U will lose money. While $APP will have positive EPS. Here is the portfolio breakdown.

So what's next?
Since all the growth is making sense as of now - I will be holding the stocks. I still have $1,000 of purchase left for the year in ROTH and will wait till the Q3 earnings report to make a judgment if I should be buying any. If I were to buy any among these three I would buy $APP (in the expectation that they can generate more revenue from MoPub than Twitter). I would, however, avoid buying $IS for now (as I see only 5%-10% movement as nothing significant has happened). $U if it keeps improving its services and releasing new products/services at this rate, I think will be the best stock to hold among these three.
EAT-SLEEP-GAME 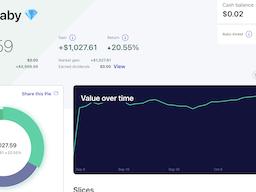 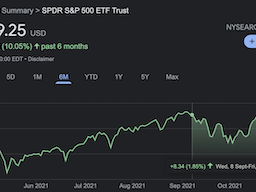 Nathan Worden@nathanworden11/01/2021
20% in 2 months isn’t just beating the market, that’s a beat down. I appreciate the check-in on all three. I like Unity the most long term but will be interested to hear how MoPub performs under Applovin.
View 1 more comment

Investor from Nepal 🇳🇵@investor_from_nepal10/19/2021
$93.7m follower assets
Around 5% of my investments are in gaming stocks.
Not a game development company but rather a game development platform, and ads and monetization paltforms.
$IS, $U, $APP
Conor Mac@investmenttalk10/19/2021
Very interesting, gaming is a hard one to predict on the distribution end, but looks like you have set your self up well for the next decade
View 3 more comments

Ben MacShane
@ben1
320 days
Commonstock is a social network that amplifies the knowledge of the best investors, verified by actual track records for signal over noise. Community members can link their existing brokerage accounts and share their real time portfolio, performance and trades (by percent only, dollar amounts never shared). Commonstock is not a brokerage, but a social layer on top of existing brokerages helping to create more engaged and informed investors.