Post by Sagar Vensi | Commonstock | Sept Idea Comp - Enphase Energy ($ENPH)
Rather than diving straight into a stock pick I thought it would be interesting if we conduct a simple inversion exercise with a top down approach to get our f…
Commonstock
Sagar Vensi@stockado2h
Thank you Krishna :) Kind of you.
Add a comment…

Sagar Vensi@stockado1d
$69.1k follower assets
Sept Idea Comp - Enphase Energy ($ENPH)
Rather than diving straight into a stock pick I thought it would be interesting if we conduct a simple inversion exercise with a top down approach to get our final pick.
Given the current macroeconomic situation, I will assume the US markets will still face turbulent times in the coming 12 months. In any given downturn, 3 sectors always take the first hit: semiconductors, finance and tech. That’s mainly attributed to the sudden collapse in demand, something we are witnessing already. So we can exclude these sectors.
The second challenge is lower domestic consumption in China, which is overlapping with a potential real estate crisis. As you can see below, China is the biggest commodity consumer; and due to lower domestic consumption we will exclude commodity stocks. This also excludes luxury companies like LVMH because the lion’s share of their business is dependent on China.
The third issue is the ongoing conflict between Ukraine and Russia, which has created significant volatility in energy & oil prices. This sector has done well in the last 6 months but the returns are short lived, so we will exclude them as well.
However, the ongoing conflict did make us realise the importance of one theme: renewable energy sources. So a stock that belongs to this sector, has a bright future. Note: Invesco Solar ETF is up by 13% YTD, making it one of the best performers.
The three primary renewable energy sources are Solar, Wind and Hydroelectric. Solar remains the fastest growing electricity source as it only has a 3% market share.
Unfortunately a big part of the solar energy supply chain is commoditised & we are mostly dependent on China.
However, there is 1 component that’s not controlled by China: micro-inverters. Even though China dumps cheaper products, 2 companies control 95% of the market in the USA: SolarEdge & Enphase.
Note that this duopoly is the result of 9 years of consolidation:
The main purpose of inverters is to convert the direct current (DC) into alternating current (AC), in order to have usable electricity. In other words, if we don’t have an inverter, the solar system by itself is useless.
Within the inverters category we have three main options:

Enphase, my pick, operates in the micro inverters space and they offer a 25 year warranty as they last for decades. They sell primarily to solar distributors. In 2021, one customer accounted for approximately 34% of total net revenues. Furthermore, sales & marketing costs are less than 9% of their revenue as it’s mostly a B2B business. From a financial perspective, you will notice the company went from losing money to nearly 15% operating margins.
The biggest catalyst for this was the new management, Mr. Badri, who became the CEO in 2017 and went through some intensive cost cutting measures.
He realised that if the product is good enough, they won’t need many service centres & they can focus on R&D. Currently more than 61% of their headcount is in India, where the labour is cheaper and they focus on research and general administrative tasks.
The company shifted their manufacturing to India & Mexico due to the tariffs (25%) imposed on certain solar products manufactured in China.
From a cash flow perspective, in 2021, the company spent less than 4% of their revenue on capex. This number is in single digits because they outsource everything to three suppliers. As the revenue surged in the last 2 years, free cash flows have followed a similar trajectory.
There is a big bump in their revenue during 2019-2020 and that can be attributed to federal tax credits. The Renewable Energy Act provided a 30% federal tax credit for residential and commercial solar installations till December 31, 2019, which will be reduced to 10% for commercial installations and 0% for residential installations beginning on January 1, 2024. This brought part of their sales forward.
So what’s next? The company has started offering more products to enlarge their TAM. 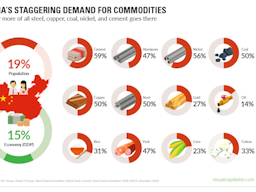 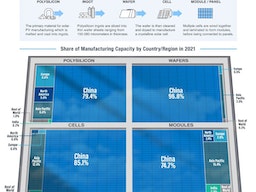 Sagar Vensi@stockado1d
If you enjoyed this write-up, please consider upvoting and commenting on this post :)
View 48 more comments

Irish Born Investor@irishSeptember 14
$23.4m follower assets
$TAN - Solar/Green Energy
$TAN looks on the cusp of a continuation breakout market willing. $ENPH, $FSLR & $MAXN are some names that look strong in the sector. I started a position in $ENPH yesterday. I am looking for the sector to continue it's strength in the coming weeks and months. 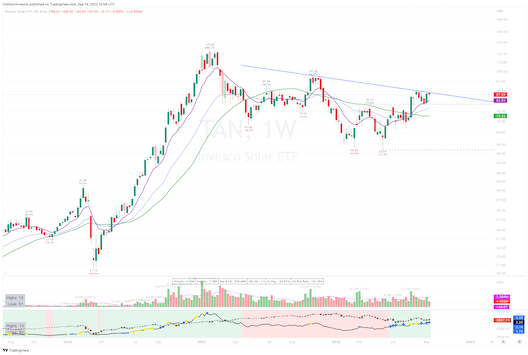 The Hippie Investor@the_hippie_investorSeptember 2
$16.9m follower assets
Seeing so many companies miss on revs or earnings or lower guidance, have issues with supply chains or the macro environment really makes appreciate how $TTD $DDOG and $ENPH don’t effing miss. They get sold off when there are macro concerns or one of their industry peers shows weakness but as individual businesses they always seem to rise above to deliver and execute. These are the type of companies I want to own. Knock on wood I didn’t just jinx them.
Joshua Simka@tomatoSeptember 2
$TTD and $DDOG are large positions for me so I'm hoping you didn't jinx them either! Any particular reason you haven't bought these or $ENPH yet?
View 3 more comments

Astronautwizard@astronautwizardSeptember 1
$17.1m follower assets
My top 10 growth stocks!
I've finally settle on 10 stocks that I want to hold for awhile and accumulate for the next years. Its been months and months of studying them and I feel that I love their missions statements and the direction moving forward at this time. (Common theme of about half of these that they have great cash flow and great revenue numbers that I find intriguing)
$RKLB I believe this is the Space Company of the future, not SpaceX. Enough said. (Currently my top position over half of my portfolio.)
$PLTR Data analytics (Use case would be consumer companies using it to integrate their data, decisions, and operations.) (The next Microsoft suite for all companies small/mid/big/large)
$MELI E-commerce play that will dominate South America
$ENPH Solar Play
$SEDG Solar Play
$TSLA AI/Robot play
$CRWD Cybersecurity
$DDOG Data (the next gold in my opinion)
$CRSP Gene Editing (I believe this stock has the biggest potential if the human trials are successful)
$STEM AI Energy Management Play
I plan to add $250 a week/or more on this portfolio. If anything changes, Ill update accordingly, but I believe in a few years out I will have at least half of these still on my portfolio.
Oliver@odysseusSeptember 1
Big big fan here of Rocketlab and have been adding to my position in the downturn fingers crossed in 10 years I’ll be looking at a graph saying I can’t believe I bought these shares for $5
Also like Stem and have also added to that position.
Definitely want to check out the two solar plays in your list because I do like some renewable tech
View 7 more comments

The Hippie Investor@the_hippie_investorAugust 31
$16.9m follower assets
I like have a diverse portfolio but I just keep selling other positions to buy more $SOFI and $PARAP. Sold $DIS $SPWR completely and previously sold some $LOW and $PYPL I just feel like the market is giving me a gift at these prices so I should go with my two best ideas. I regret not buying more $ENPH when it was a great price so trying to learn from my past experience.
Astronautwizard@astronautwizardSeptember 1
I love me some $ENPH. I feel you! What I did is I ended up telling myself after these amount of shares ill stop buying and let it ride. Im pretty heavily invested in two stocks as well. $PLTR $RKLB But want to diversify and have a total of 10 positions (from now on, ill just invest in the other ones). So its all up to you on when you want to stop buying those two stocks, good luck! sofi is in my watchlist , hope the best for ya
View 3 more comments

Pat Connolly@pat_connollyAugust 17
$124.3m follower assets
Rethinking position sizing
New information has surfaced to make me consider reducing the size of my position in $SEDG
I entered the trade based on increased demand for their products, which remains to be true. However, the supply side of the equation was a problem in Q2. Now the heatwave in China is causing some factories to shutdown for a few days. I am unable to determine if SolarEdge's supply chain is actually effected or not but this seems like a fool me once shame on you, fool me twice shame on me situation.
Last quarter the company's margins & output were negatively effected by factors outside of their control, and now it looks like there is a risk of this occurring again. Core to my bull thesis was rising energy costs in Europe but I also failed to recognize how this could be a double edge sword for a company that has a factory in Europe. Rising input costs and potential limitations of energy use is a problem for all European manufacturers.
So to sum it up SolarEdge may once again be negatively effected by supply chain issues in China, are facing rising input costs at their European factories, and also face currency headwinds due to the EUR weakening relative to USD.
I still believe in the company long term and believe investing in inverters is the simplest method to bet on a widespread increase in demand for solar energy. It's like if you were bullish on new car sales you could bet on tire sales, inverters are that essential to the functionality of a complete solar system. $ENPH trades at a richer multiple than SolarEdge but now this premium is starting to make sense, as Enphase may be the superior instrument to bet on inverter sales.
For now I am keeping my position intact as the technicals of the chart remain solid. The company is above the 50 & 200 moving day averages but if momentum begins to fade I now have stop orders to trim my position accordingly.
twitter.com
Ryan Henderson@ccm_ryanAugust 17
I read somewhere that they’re trying to reposition some of their supply chain to Mexico. Would that adjust your thesis at all?
View 1 more comment

James Andrews@retire4lifeAugust 5
$16.2m follower assets
Weekly wrap up
A nice week in the markets with some of my portfolio stocks consolidating. Went on a little bit of a shopping spree based on my watch list and some stocks starting to gain momentum.
Income Portfolio: Opened new positions in $NSA $BC $NXST and $ABR . Increased holdings in $VIG and $DVY Collected dividends on $RITM $JPM and $LOW .
Growth Portfolio: Added $ENPH to my portfolio holdings.
Speculative: No buy/sell action but $CRSP continuing to perform nicely up 25% thus far.
Conor Mac@investmenttalkAugust 19
Love to see that dividend power growing.
Add a comment…
Next

Luke Campbell
@lacampbell
278 days
Commonstock is a social network that amplifies the knowledge of the best investors, verified by actual track records for signal over noise. Community members can link their existing brokerage accounts and share their real time portfolio, performance and trades (by percent only, dollar amounts never shared). Commonstock is not a brokerage, but a social layer on top of existing brokerages helping to create more engaged and informed investors.