Preston | Investor Insight@investorinsight6d
$3.1m follower assets
$DIA Technical Analysis Review
$DIA has held up better than all other indices over the past 6 months, but the tide is starting to turn on it as well. We are finding strong resistance at the 20SMA on the weekly, and we are entering into a stage 4 decline.
I expect, AT MINIMUM, a test of the $295 level over the next few months. Now for this week, we have a hammer candle that could lead to a short term bounce.
If we get a bounce back to the 20SMA, I will be entering short positions using $SDOW or $DOG.
More pain to come in my opinion - I am sorry. For long positions, stay patient as incredible opportunities will come to those who are patient.

Preston | Investor Insight@investorinsightMay 11
$3.1m follower assets
$DIA High Time Frame Technical Analysis
The Dow Jones is entering a stage 4 decline as we speak. The minimum target for the Dow Jones is $285 for a gap fill to the downside.
It is possible we get another test of the key moving average above before continuing its downtrend.
RSI is almost oversold as this points to a short term bounce before continued downside.
This is how I use TA on a macro time frame.
$DOG and $SDOW are two ways to play the downside on $DIA to hedge if needed. 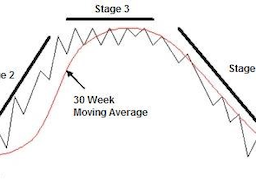 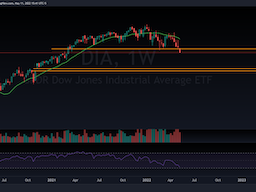 Paul Cerro@paulcerroApril 28
$18.2m follower assets
Unique strategy for $SPY $QQQ and $DIA
I was curious to see if a different kind of strategy tracking the indicies yielded different returns.
The below are three strategies and their returns.
Strategy
Let me know your thoughts! 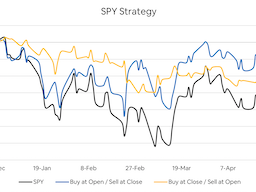 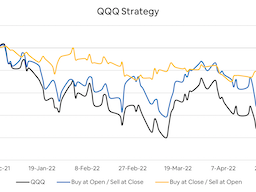 Dissecting the Markets@dissectmarketsApril 16
$3.9m follower assets
Big Tech should be broken-up
Why do I say that Big Tech should be broken up?
Well, I think that Big Tech has come to a point where they're too influential on the world and their size is limiting shareholder returns.
Today, Big Tech stocks continue to outperform the $SPY $DIA and $QQQ. But tomorrow, will Big Tech be able to replicate the same success? The larger they get, the harder it gets to move the needle for a large business.
At the same time, Big Tech is bloated with so much wealth that they just buy up their competitors, splurge on share buybacks, and pour tons of money into political causes to move a nation's politics into their favor.
While many investors like Big Tech's nimbleness in squashing competitors, it has come with the cost of limiting innovation. Many founders that experienced a big windfall in their finances by getting their startup bought out by a Big Tech firm later quit working at the Big Tech firm because of their disgust for Big Tech.
I'm in favor of breaking up Big Tech. I see immense value being unlocked from it. I see society as a whole benefiting from the reduced powers of Big Tech.
If you're curious to learn more about my thoughts on breaking up Big Tech, read here.
vocal.media
sam stribling@stribApril 16
This has happened before! Late 1880’s-1910’s this is eerily similar to what happened to big oil. They too were growing enormous, frankly even more political in my opinion as they could literally buy presidencies (1896). The pendulum started to swing back and they were broken up. That process probably led to the largest wealth generating event maybe in history and history has a tendency to repeat itself
View 6 more comments

My Weekly Stock@myweeklystockApril 3
Weekly Debrief Mar. 25 - Apr. 1
The equity markets were flat for the week, with the SP500 finishing up 0.1% and the NASDAQ +0.7%. The stock indices were due for a pause after the rally since mid-March.
The key yield curve finally inverted this week (10-year rate lower than the 2-year), which historically has been a signal of a future economic recession. However, the recession's timing and its impact on the stock market are not easy to predict.
Oil dropped below $100 after the US released more barrels from its strategic reserve.
We saw a mixed sector performance, with 7 out of the 11 SP500 sectors positive this week. Real Estate and Utilities led the market while Energy and Financials lagged.
Energy remains the undisputable winner of 2022 with a 39% gain, while Utilities Is the only other positive sector this year, and Communication Services is the only remaining sector in correction territory.
More charts in my weekly stock debrief:
https://myweeklystock.substack.com/p/my-weekly-stock-debrief-mar-25-apr?s=w
$SPY $SPXL $DIA $QQQ 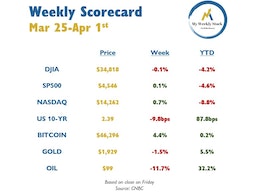 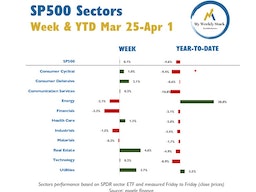 My Weekly Stock@myweeklystockMarch 2
80% of the #SP500 stocks were down yesterday
74% are in correction territory (vs. 52w highs)
63% are below their 200-day moving average
$SPY $QQQ $DIA 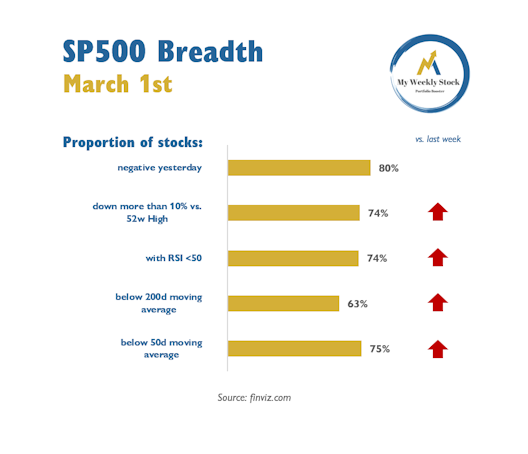 My Weekly Stock@myweeklystockMarch 2
SP500 Sectors
SP500 closed down -1.5% yesterday.
All sectors red except energy...
Start to sound like a broken record in 2022.
$SPY $QQQ $DIA 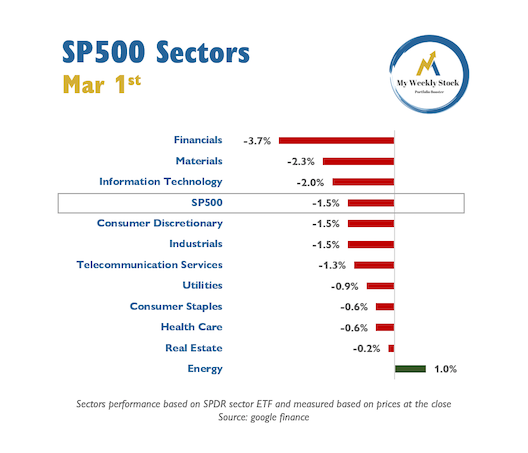 Anton Vuljaj
@antonv
1781 days
Commonstock is a social network that amplifies the knowledge of the best investors, verified by actual track records for signal over noise. Community members can link their existing brokerage accounts and share their real time portfolio, performance and trades (by percent only, dollar amounts never shared). Commonstock is not a brokerage, but a social layer on top of existing brokerages helping to create more engaged and informed investors.