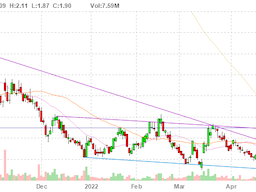 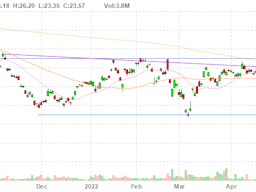 James Andrews@retire4lifeJune 17
This Weeks Trades
Wow, what a week. Both my income and growth portfolios are fully in the red for the first time. There are some great buying opportunities out there and I will continue adding to my income portfolio when a company meets my criteria and price range. Holding off adding growth stocks at the moment, looking for some positive momentum.
Income Portfolio: Trailing stop hit on my position in $VLO so completely out of this trade now for a 99% return since Aug 2021. Opened new positions in $EGP $EXR $KMI and $AVY. Collected dividends on $WHR $NEE $HDV and $SDIV
Growth Portfolio: Trailing stop hit on $ENPH for a 16% return. I will likely look to add back at some point as I see great potential in this company over the longer term. Trimmed some of my $AMWL shares, and will look to sell more when the price is right.
Speculative: No adds or sells but my holdings of $CRSP finally turned green so that is pleasing
Dividend Dollars@dividenddollarsJune 18
Love the $NEE dividend! Always fun to see another neehead
View 2 more comments

Steve Matt@interrobangbrosApril 27
$10.5m follower assets
Sold NTLA
Intellia Therapeutics at $56.03
April 18
1 of 6
CRISPR Basket Sale
Sold my basket of CRISPR stocks ($BEAM, $CRBU, $CRSP, $NTLA) and investing all proceeds into $GNOM. With a newborn on hand now, time is more valuable and trying to keep up with the gene-editing stocks isn't worth the time since they're far from having any treatments on the market. Would rather let an ETF run.
Scoreboard Investor@scorebdinvestorApril 28
Thanks for sharing. Have to maximize your time when you can! Glad you were able to realize these decisions needed to be made to keep the balance in your life!
Add a comment…

Josiah Racklin@josiahracklin11/23/2021
$83.4m follower assets
On Bill Gate's 5 Favorite Books of the Year: The Code Breaker, Walter Isaacson's Book on Jennifer Doudna and CRISPR
If you're into Crispr stocks, you might be wondering why $CRSP has done poorly while $NTLA has done great.
One thought would be because of Jennifer Doudna's involvement. Doudna was invited to join Crispr Therapeutics in 2014 but she declined. Instead she founded Intellia Therapeutics.
If you're into this space, The Code Breaker is a must read. 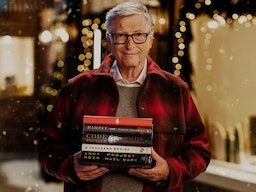 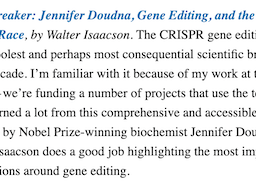 Josiah Racklin@josiahracklin11/23/2021
Crispr Therapeutics over the past year: -29% 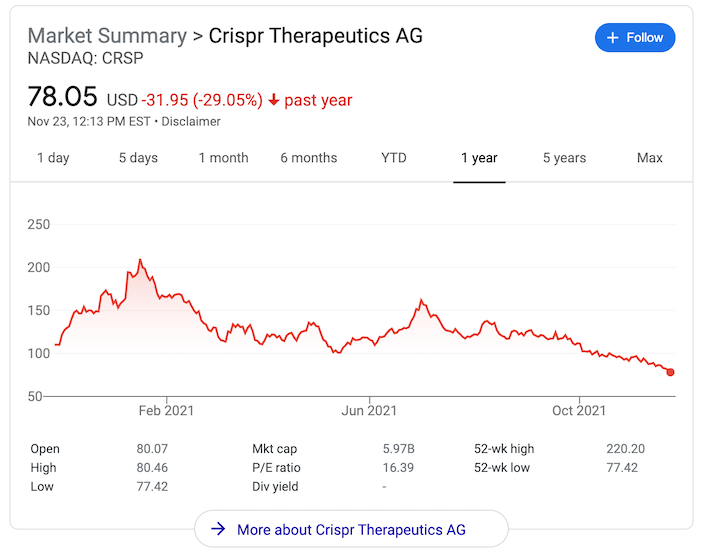 Nathan Worden@nathanworden11/20/2021
The crazy thing is that if the Nasdaq starts falling too, these names you listed will probably continue to fall more 😬
View 4 more comments

Rob T@robtsai08/27/2021
$96.4m follower assets
I've been gradually raising cash - converting my 401k SPY and Target Funds to be able to pick up the dip that I think is coming, and yet the market keeps chugging along.
I've been tinkering around the edges of the portfolio - selling out of $CRSP, because all my other Crispr stocks have performed and the largest market cap one seems mired in quicksand.
Added small stakes in $AMD and $NVDA and $ESTC in the last month.
Biotechs as always look exciting and dangerous. Check out $SAVA today ouch!
Rob T@robtsai08/27/2021
Goes to show you don't know which days to sit out of the market. Wow - big green day for sure (except for $AFRM) . Will be interesting to see if there's a follow through next week.
View 1 more comment

Rob T@robtsai07/03/2021
$96.4m follower assets
What mRNA is good for and what it maybe isn't
Over on Science, Derek Lowe's latest is a must read: link
My notes:
Big players like Moderna and BioNTech (Pfizer partner) dominate, while CureVac failed on now Sanofi wants to get in on the action (vaccine failed and was only 47% effective)
Moderna was originally going to be a therapy company (pump people up with mRNA to treat them) and not as a vaccine company. Vaccines are great as you leverage the immune system to have a memory and fight off viruses after the injection. Ongoing therapeutics are tough - how often do you keep injecting people with mRNA? You're using mRNA to make proteins - which the immune system may try to fight! And what if the reaction is severe - in a quest to solve one ailment you cause another!
Targeting is difficult - liquid nanoparticles that deliver mRNA "pile up in the liver" - so low hanging fruit is to work on the retina (things stay there and don't go to the liver) or target liver diseases.
CRISPR dominates in treating certain genetic diseases - because using mRNA to target people whose genes make bad proteins in order to deliver good proteins means you still have the bad proteins lying around, but if you CRISPR, you fix the problem at the source - and the body no longer makes bad proteins and only good ones. CRISPR for the win!
What else could mRNA fix? Alzheimer's forget it - we don't know what causes it.
What about monocolonal antibodies?
Apparently that's being looked at:
https://translational-medicine.biomedcentral.com/articles/10.1186/s12967-019-1804-8
CAR-T chimeric antigen receptor T-cell therapy is promising.
As you can tell from the name, that’s not an antibody-driven approach at all, but rather uses T cells on the attack, and instead of a vaccination to rouse them (which hasn’t really worked), it’s a much more laborious procedure that engineers a patient’s own T cells to deliberately recognize some particular surface antigen on the targeted cancer cells. It works for some kinds of leukemia (and not always then), and the successes are due partly to leukemia cells being individually accessible out in the bloodstream, and very much because some key antigens have been identified that lets these cells be specifically attacked. Even then, your leukemia cure likely comes at the cost of permanently impairing the population of the leucocytes involved. That’s a real concern, but if you’re to the point of doing CAR-T your alternative is basically death within months, so it’s a worthwhile trade. Naturally, people are working on other specific ways to mobilize T cells as well.
Check out the 1 yr chart of MRNA
Disclosure: No position in $MRNA or $PFE, but own $BEAM, $NTLA and $CRSP. 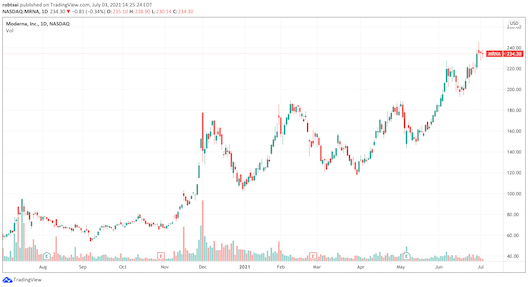 Yonathan Daniel@y4l.investing07/03/2021
CRISPR is cool tech, but doesn’t seem to have a major advantage over other approaches in the indications they’ve selected. Feel like you’re paying a huge premium for the hype and optionality behind the tech.
Just going through the pipeline - SCD and Beta Thalessemia is a good target imo, but they’re sharing more than half the economics w/ Vertex. Vertex has commercialization rights. So basically CRSP will develop the drug. vertex funds a lot of the R&D and pays CRSP for milestones. Then if the drug sells, CRSP gets royalty payments on the sales
Their CAR-T assets also aren’t super impressive either imo.

Rest of in vivo gene tx pipeline has a lot of competition imo. With DMD, you have SRPT, PFE, and SLDB with full blown gene therapy. GBIO will likely enter the space too. All of them are ahead of CRSP.
You also have DYN and RNA w/ ASO/RNAi drugs for DMD and DM1. For Cystic Fibrosis, VRTX already owns 90% of the market w/ an oral drug.
Only pts left are those w/ non 508del mutations, and you have KRYS and FDMT going after them.
View 1 more comment

Michael McGuiness@mikemcg06/30/2021
$211m follower assets
@robtsai is a must-follow for anyone interested in biotech & stocks with asymmetric payoffs
In just the past few days I've learned quite a bit about:
This is a space I've wanted to get smarter on for a while, but most resources out there have been pretty inaccessible. Thanks @robtsai for making these complicated topics comprehensible!
commonstock.com
Nathan Worden@nathanworden06/30/2021
Agreed! @robtsai is great! Thanks for sharing you're knowledge!
View 2 more comments 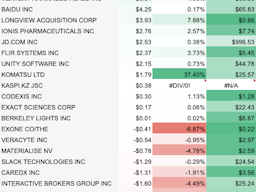 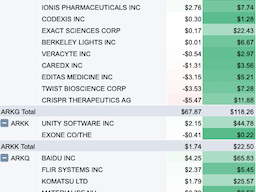 Eric Pelnik@eric12/22/2020
Interesting to see them rotate into more traditional tech names like $GOOG and $AAPL. Seems like they're not the only ones thinking we may be reaching a peak soon.
View 2 more comments
Next

Brian Cooper
@coopatroopa9000
1373 days
Commonstock is a social network that amplifies the knowledge of the best investors, verified by actual track records for signal over noise. Community members can link their existing brokerage accounts and share their real time portfolio, performance and trades (by percent only, dollar amounts never shared). Commonstock is not a brokerage, but a social layer on top of existing brokerages helping to create more engaged and informed investors.