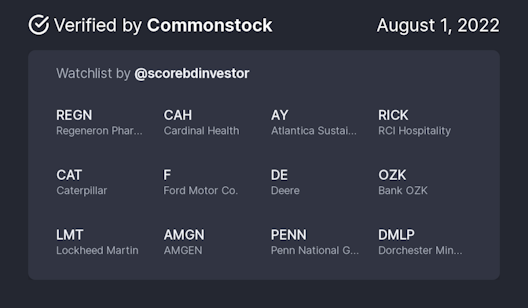 Conor Mac@investmenttalkAugust 2
What specific alternatives did you have for Costco?
View 5 more comments

Scoreboard Investor@scorebdinvestorJuly 20
$22.6m follower assets
Thank You, July Idea Competition Participants!
I just want to say thank you to all who participated in the July Idea Competition! The longer I am on this platform, the more I realize that I have so much to learn about investing.
There are so many great investors here to bounce ideas off and learn from.
I really enjoyed everybody's recommendations for the competition, and I have added all of the positions to my portfolio watchlists to track and see if they might be good additions to my portfolio!
Keep an eye out for my monthly Watchlist updates here on @commonstock. Check out my July update here.
Here are two high rankers in my Scorecard and early contenders to make an appearance on the August update:
$RICK by @stonkmetal
$AY by @averageinvestor
Thanks again and I am looking forward to tracking all of these picks!
commonstock.com
Edmund Simms@valuablJuly 20
There were many great picks!
View 4 more comments

AverageInvestor@averageinvestorJuly 17
$17.2m follower assets
Buy the Dip
Here’s my short pitch for buy the dip: $AY - folks are still going to need electricity/power from established partners, there’s momentum towards renewables and you’ll get a 5% dividend while you wait. #buythedip

Dividend Dollars@dividenddollarsApril 16
$24.9m follower assets
Dividend Dollars Portfolio Update 🔥
The below is a summary of the full portfolio article located here.
This week we did some restructuring to our energy holdings and crossed our first $100 in earned dividends!
Market Recap:
We lost a day of trading this week due to Good Friday. Having the day off was a good ending to a bad week! The S&P lost 2.1%, Nasdaq 2.6%, the Dow was down 0.8%, with Russell making the only gain of 0.5%.
The information technology, health care, financials, and communication services sectors were the S&P’s biggest losers. Downward movement in the information technology and communication sectors were linked to moves in the Treasury market. The 10-year yield went up 12 basis points this week despite economic discussion that inflation was peaking. That discussion was followed by two days of declining rates following big CPI and PPI numbers for March.
The financial sector was down particularly because of earnings missed by JPM and WFC. Other banks for the most part surpassed expectations.
Portfolio Update:
To date, I have invested $8,020 into the account, the total value of all positions plus any cash on hand is $8,494.4. That’s a gain of $474.42 for a total return of 5.92%. The account is down $48.08 for the week which is a 0.56% loss.
This week we received two dividends. $13.77 from $UWMC and $3.17 from $BBY which officially has made this April my best month for dividends yet!
Trades:
Below is a breakdown of my trades this week.
On Wednesday I did some restructuring of the portfolio. I sold my whole position in $EOG and spun a majority of those into a new utilities position in $AY. There are a couple of reasons I did this. The IPCC report came out this week and is pretty grim about the future of our planet. It makes it clear that the devastating impacts of a climate crisis are occurring and the opportunity to curb terrible outcomes are already slipping through our fingers. The report says that greenhouse gas emissions must peak by 2025 to limit global warming close to 1.5 degrees Celsius as targeted by the Paris Agreement. Mitigating climate change continues to a growing and ever important focus for governments, business, and people.
Though the Ukraine conflict is where the world’s attention is at right now. I still believe that oil will be a good business model in the short term and large oil firms will also adapt to the changing environment, thus I am continuing to hold $CVX, but I believe that adoption of more “green” policies are inevitable and will come sooner or later. When this happens, oil companies will come under pressure and renewable energy companies will benefit. It will be a long transition, possibly over decades. But I would rather build positions on renewable energy companies now instead of later. For that reason, I sold my $EOG position and rolled it into a new position in $AY, a sustainable infrastructure company with a majority of its business in renewable energy assets (solar, water, and wind).
I wrote another post earlier this week diving more deeply into $AY.
April 11th
April 12th
April 13th
April 14th 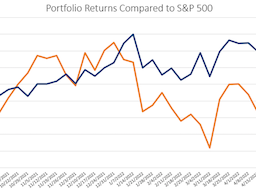 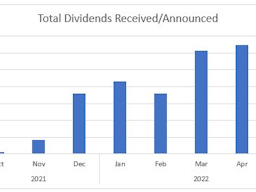 Kyle Picha@kylepichaApril 16
Awesome!! How are you creating that chart with your returns vs the S&P? Looks great
View 4 more comments

Dividend Dollars@dividenddollarsApril 13
$24.9m follower assets
New position in AY
Atlantica Sustainable Infrastructure at $33.56
April 13
$AY - Green Energy Dividend Move
After reading a few articles and listening to a podcast on the latest Intergovernmental Panel on Climate Change (IPCC) report, I started a new position in $AY today. The IPCC report is pretty grim about the future of our planet. It makes it clear that the devastating impacts of a climate crisis are already occurring and the opportunity to curb terrible outcomes are already slipping through our fingers. The report says that greenhouse gas emissions must peak by 2025 to limit global warming close to 1.5 degrees Celsius as targeted by the Paris Agreement. Mitigating climate change continues to a growing and ever important focus for governments, business, and people. For that reason, I wanted to expand my long term dividend portoflio to include another renewable energy stock, $AY.
$AY or Atlantica is a sustainable infrastructure company with a majority of its business in renewable energy assets (solar, water, and wind). Their portfolio is also complimented with storage, efficient natural gas, and transmission infrastructure assets that helps enable the transition towards a clean energy mix. The company pushes for growth in three ways: organic growth through optimization of their current portfolio, acquiring assets from third parties through the use of their presence and network across the globe, and continued development and construction of new assets. Through their business model, their objective is to pay a consistent and growing dividend to shareholders that is sustainable on a long term basis.
Today, $AY wholly owns 25 assets and also partial ownership of 14 assets in renewable power plants (most solar), natural gas-fired generation plants, electric transmission lines, and water desalination plants. These assets have a weighted average life of just under 38 years and predictable returns given the fact that all of its revenues are contracted or regulated with a weighted average contract life of 15 years. They produce 2,044 MW of aggregate renewable energy, 343 MW of efficient natural gas-fired power generation, 55 MWt of district heating capacity, 1,229 miles of electric lines, and 15.5 M ft3 per day of water desalination. The core of their portfolio is in NA, SA, and EU and they intend to expand it further.
The company's debt levels have come down significantly in the last decade, but they still have a ways to go. In their Q4 presentation, they outlined a projection to reduce scheduled debt by $2 billion in the next five years. Their EBITDA has grown steadily over the last five years and management is predicting an adjusted EBITDA in 2022 ranging from $810-$870 million and a targeted CAFD ranging from $230 million to $250 million. CAFD is cash available for distribution and is essentially how much can be paid in dividends to shareholders. CAFD is stable and predictable due to the long-term lifespan of the assets and the length of revenue producing contracts.
All in all, I feel that the company has a safe and growing dividend, a strong portfolio of renewables across many regions that continue to grow, an improving balance sheet, and a laser-focus on an industry that will only become more and more important to the world as time passes.
Scoreboard Investor@scorebdinvestorApril 13
Is this your first ESG focused holding?
View 4 more comments
Next

Dividend Dollars
@dividenddollars
127 days
Commonstock is a social network that amplifies the knowledge of the best investors, verified by actual track records for signal over noise. Community members can link their existing brokerage accounts and share their real time portfolio, performance and trades (by percent only, dollar amounts never shared). Commonstock is not a brokerage, but a social layer on top of existing brokerages helping to create more engaged and informed investors.