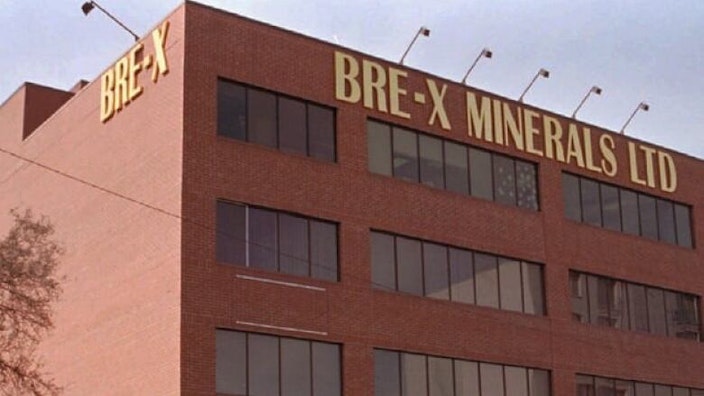 Part One: Welcome to the Miners
When I moved to Calgary in the 1990’s, the city was buzzing with excitement about a company whose name would soon be known across the globe. Almost everyone you met wanted to talk about their investment in Bre-X minerals, a small Calgary-based mining company that claimed it had discovered a massive gold deposit in Indonesia. Driving through the neighbourhood of Hillhurst, it was hard to miss the four-storey red brick building with the mining company’s name emblazoned in enormous gold lettering on the front. Investors began pouring their savings into the stock, dreaming of the obscene riches that awaited them. It began as a penny stock on the Alberta Stock Exchange in 1989, with Bre-X subsequently listing on the NASDAQ & TSX - its share price peaking at CA$280. In the spring of 1997, the fraud began to unravel when prospective partner Freeport-McMoRan announced that its own due-diligence core samples showed insignificant amounts of gold. A frantic sell-off of Bre-X shares ensued, trading was suspended, and the company filed for bankruptcy protection. Angry investors lost billions, and the Canadian financial sector faced strong criticism, causing regulators to overhaul and tighten the securities regulatory system.
In the 2016 film ‘Gold’, Matthew McConaughey portrays prospector Kenny Wells, in a story loosely based on Bre-X. The film may have been a bomb at the box-office, but if you’re planning on investing in junior mining stocks, I believe it’s worth your time one evening. The securities system has been revamped, but fraudulent companies still abound and investors in 2022 can be duped just as easily, albeit through different tactics. Stock promoters and lifestyle companies flourish, and it takes vigilance to avoid potential scams. I perform my best due-diligence and put in significant effort researching prospective investments, but I still fall prey at times. The profit potential of some mining stocks is alluring, and FOMO can be a struggle when you become aware of a company that could be a multi-bagger, even overnight. As a former energy trading analyst, one might assume I would have gravitated to energy investments, but once I discovered the miners, I had a hard time looking elsewhere because the risk/reward here is very compelling.
Oh, the possibilities!
Bre-X was an extreme example and there are plenty of reasons that remain to make one leery of junior mining companies. However, if you find one with an experienced and ethical team that delivers impressive drill results, the returns can be outstanding. A recent success story worth recounting is that of Great Bear Resources, who began exploring the Dixie property in the Red Lake district of Ontario in 2015. Star geologists Bob Singh and Chris Taylor, along with highly reputed Director Doug Ramshaw (you may want to write those names down) led the team in discovering a series of high-grade gold deposits.
From 2015 until August 2018, Great Bear shares traded roughly in the C$0.05-$0.60 range, with the low stock value and high volatility typical of a junior miner. On August 28, 2018, there was a spike in volume with almost 6.5 million shares traded. The share price continued to climb, then flatlined for about a year before making its final surge. Kinross’ acquisition of Great Bear was completed in February of this year; shareholders could elect to receive C$29.00/share in cash for each Great Bear common share, or receive Kinross shares and cash subjected to pro-ration (~C$25.80 in cash and ~0.4257 Kinross shares per Great Bear share). I have seen folks on Twitter speak of buying at the $0.60 level and riding it to the top, or others who were happy selling when it reached $4.00 and now live with regret. No one could have known the success that lay ahead of the Great Bear team. For those that followed the story closely and knew management would be acting in the shareholder’s best interest, hopefully many had the conviction to stay long and ride the volatility wave all the way up to Kinross. Every investor dreams of a Great Bear, and I hope you find yours.
Coming soon…Part Two: Red Flags to Avoid Pitfalls

Nathan Worden@nathanwordenMay 7
Love the reflection on how important it is to find experienced and ethical management teams. And I think it's a great idea to look deeply into the red flags in order to avoid pitfalls. Looking forward to the next piece!

Jennifer@jennymanydotsMay 7
Author
@nathanworden Thank you, Nathan. I missed out on Great Bear, but I'm very fond of the team and always watch what they are up to. My number one piece of advice in the sector: follow the smart ones!

ThomasFJE@smhMay 7
Never invested in a mining company but read everything! Very interesting 👌

Jennifer@jennymanydotsMay 7
Author
@smh Thank you, Thomas. I will be interested to see if my future returns or any of my posts will make you consider it - or for that matter - turn you away from it, lol.