The World Food Programme (WFP) and the Food and Agriculture Organization of the United Nations (FAO) are out with a new report outlining countries that "are either already starving or on the brink of disaster."
We have a choice: act now in the face of these unprecedented needs, to save lives and invest in solutions that secure stability and peace for all. Otherwise, we will see people around the world face rising food insecurity – and even famines – driving migration, unrest and conflict.
"There is now a very real risk that food and nutrition needs across the globe may soon outstrip WFP's or any organization's ability to respond."
https://elements.visualcapitalist.com/3-reasons-for-the-fertilizer-and-food-shortage/ 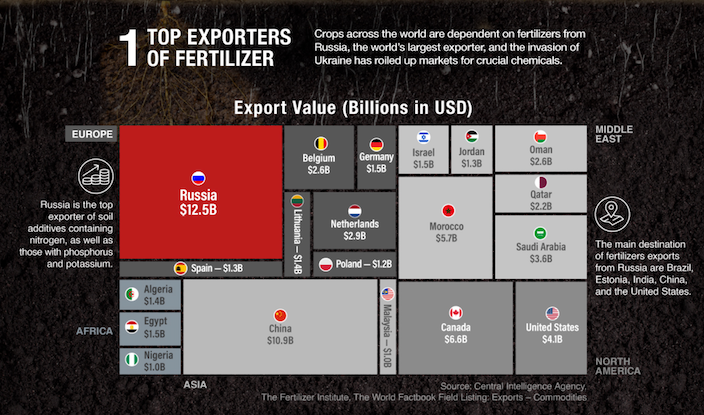 #1: The Fertilizer Shortage
Since the beginning of the Russian invasion of Ukraine in February 2022, the war has disrupted shipments of fertilizer, an essential source of nutrients for crops. Russia is the world’s top exporter of nitrogen fertilizer and ranks second in phosphorus and potassium fertilizer exports. Belarus, a Russian ally also contending with Western sanctions, is another major fertilizer producer. In addition, both countries collectively account for over 40% of global exports of the crop nutrient potash.
The main destination of fertilizer exports from Russia are large economies like India, Brazil, China, and the United States. However, many developing countries—including Mongolia, Honduras, Cameroon, Ghana, Senegal, and Guatemala—rely on Russia for at least one-fifth of their fertilizer imports. Furthermore, the war intensified trends that were already disrupting supply, such as increased hoarding by major producing nations like China and sharp jumps in the price of natural gas, a key feedstock for fertilizer production. 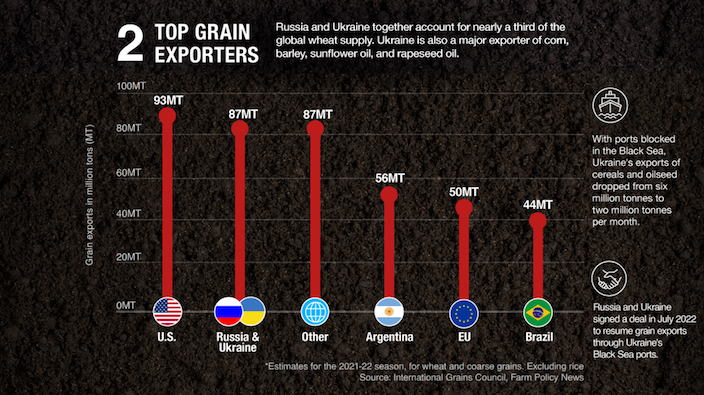 #2: Global Grain Exports
The blockade of Ukrainian ports by Russia’s Black Sea fleet, along with Western sanctions against Russia, has worsened global supply chain bottlenecks, causing inflation in food and energy prices around the world. This is largely because Russia and Ukraine together account for nearly one-third of the global wheat supply. Wheat is one of the most-used crops in the world annually, used to make a variety of food products like bread and pasta.
Additionally, Ukraine is also a major exporter of corn, barley, sunflower oil, and rapeseed oil.
As a result of the blockade, Ukraine’s exports of cereals and oilseed dropped from six million tonnes to two million tonnes per month. After two months of negotiations, the two countries signed a deal to reopen Ukrainian Black Sea ports for grain exports, raising hopes that the international food crisis can be eased. 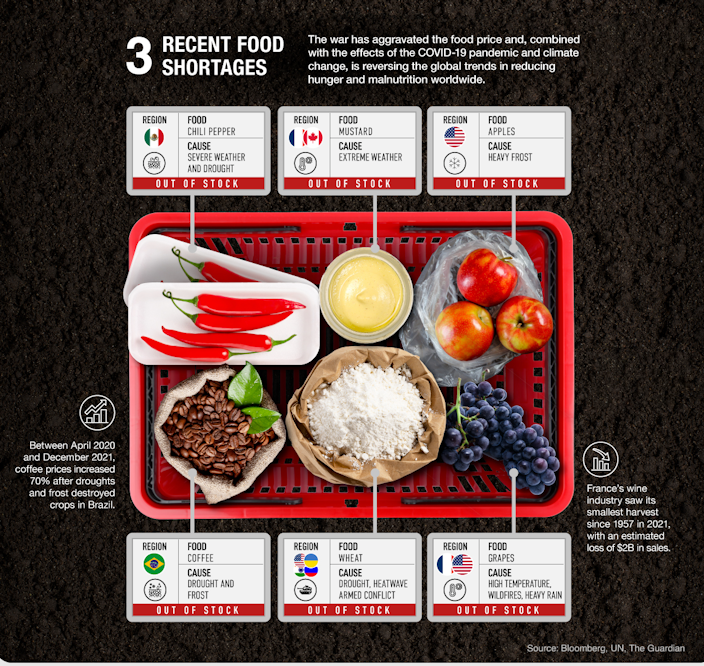 #3: Recent Food Shortages
Besides the war in Ukraine, factors including the COVID-19 pandemic and climate change resulted in nearly one billion people going hungry last year, according to United Nations.
France’s wine industry saw its smallest harvest since 1957 in 2021, with an estimated loss of $2 billion in sales due to increasingly higher temperatures and extreme weather conditions.
Heat, drought, and floods also decimated crops in Latin America, North America, and India in recent months. Between April 2020 and December 2021, coffee prices increased 70% after droughts and frost destroyed crops in Brazil.
In the face of multiple crises, the World Bank recently announced financial support of up to $30 billion to existing and new projects in areas such as agriculture, nutrition, social protection, water, and irrigation.
Meanwhile, in a separate report, the heads of global humanitarian and financial institutions warned:
The war in Ukraine continues to exacerbate the global food security and nutrition crisis, with high and volatile energy, food and fertilizer prices, restrictive trade policies, and supply chain disruptions.
Despite the reprieve in global food prices and the resumption of grain exports from the Black Sea, food remains beyond reach for many due to high prices and weather shocks. The number of people facing acute food insecurity worldwide is expected to continue to rise.
Fertilizer markets remain volatile, especially in Europe, where tight natural gas supplies and high prices have caused many producers of urea and ammonia to stop operations. This may reduce fertilizer application rates for the next crop season, prolonging and deepening the impact of the crisis.

"Building resilience for the future will require a continued comprehensive and coordinated effort to support efficient production and trade, improve transparency, accelerate innovation and joint planning and invest in food systems transformation.
Agricultural research and development is a chronically underinvested sector, while it has one of the highest returns on public spending.
Addressing both infrastructure bottlenecks and input supply bottlenecks (e.g., fertilizers and seeds) are critical to an efficient food supply system."
$MOS $LXU 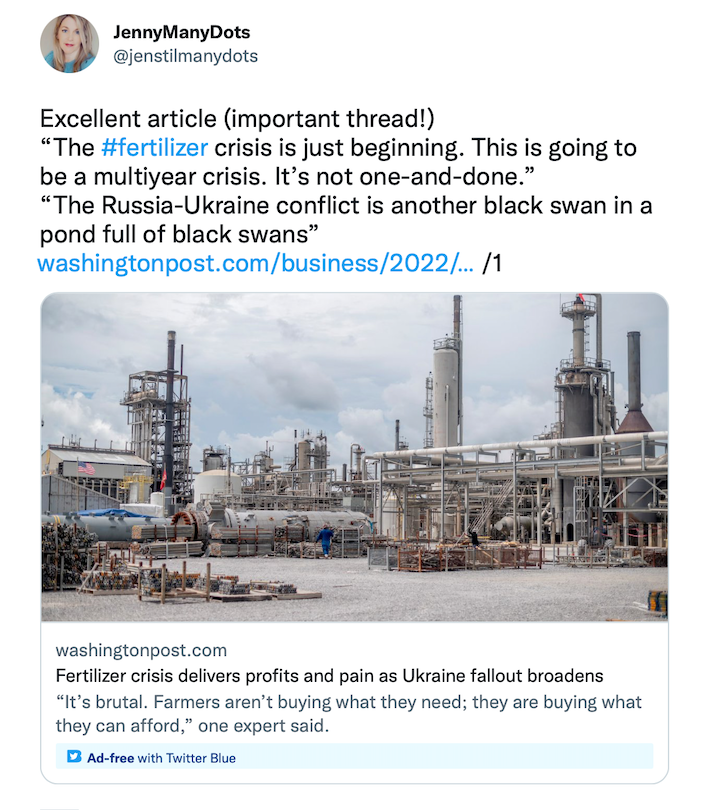 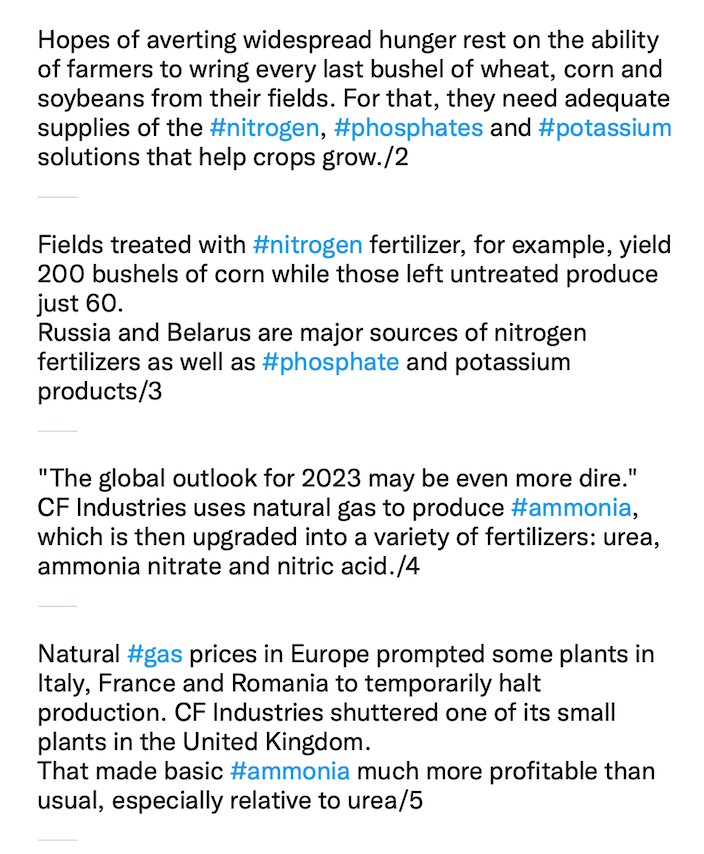 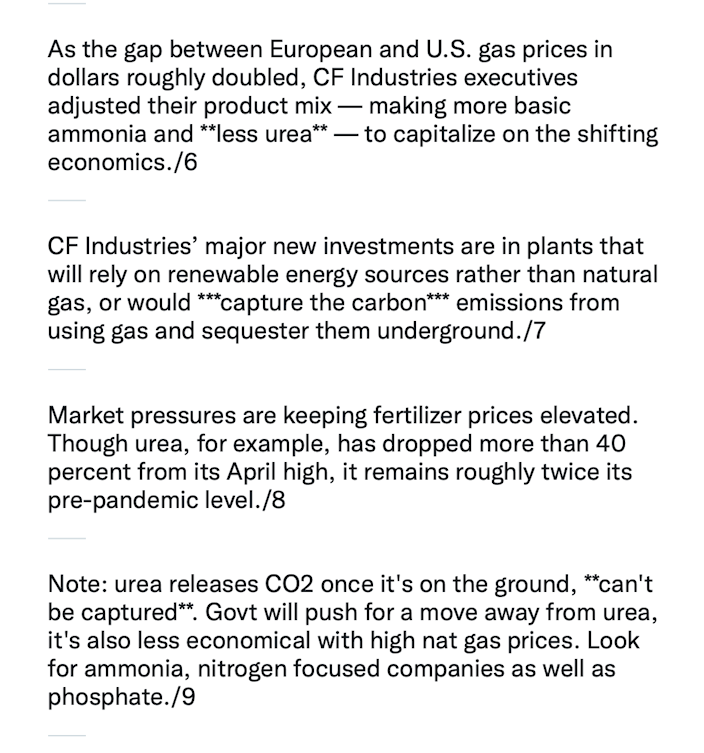 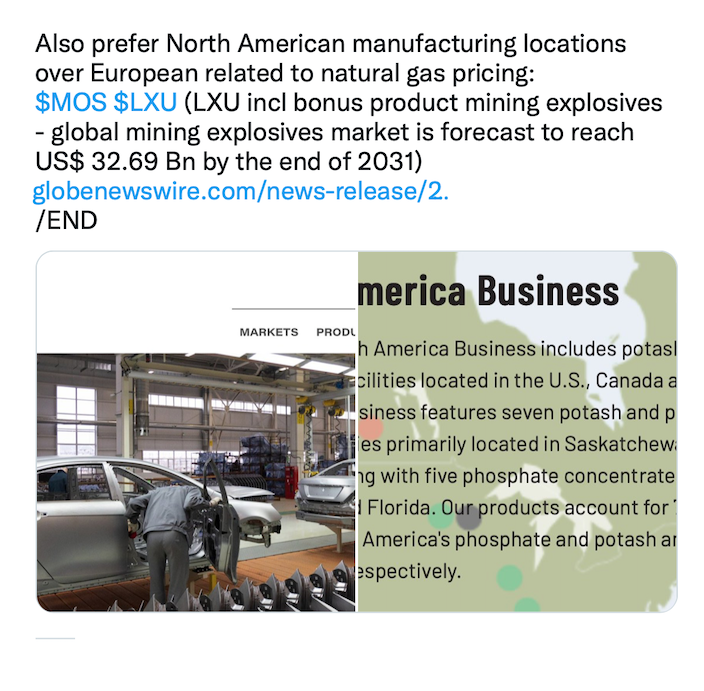 Post by Jennifer | Commonstock | The GoRozen Split: A Formula For Success Includes Agriculture
In one of Goehring & Rozencwajg’s top posts of 2022**_, “The Commodity Bull Market Has Only Just Begun”_** they mention a frequently asked question: “_Have …
Commonstock

Jennifer@jennymanydots6d
Author
@tomato thanks Joshua, not a great day today for either of those - but then it wasn’t across the board. Would have added to them if I could have. Have a great weekend!

Nathan Worden@nathanworden6d
Very timely and relevant. Kind of a scary reminder about how interconnected things are with Russia being a big fertilizer provider, many other countries are in trouble if they can't get that essential source of nutrients for crops.

Jennifer@jennymanydots6d
Author
@nathanworden It is scary - as much as I appreciate opportunities for a good return, it pains me to think it's coming from a cause of human suffering. I prefer to think of my investment as a way of encouraging growth in the sector and helping to eliminate the problem. Tough times ahead for many I'm afraid.

Nathan Worden@nathanworden6d
@jennymanydots I agree— and while the catalyst is human suffering (the war), one way to end that suffering is increased investment in wheat, fertilizer, natural gas, etc. in other parts of the world so that food needs can be met without relying on Russia. I also struggle with the question of— 'is this me profiting off of a situation that is hurting people, or is this creating the infrastructure to solve the problem.' It's probably a little of both, which definitely causes dissonance.