Peter Offringa@stackinvestingSeptember 22
$120.6m follower assets
Oracle Cloud in Hypergrowth $ORCL
I was recently surprised to see that Oracle's Cloud Infrastructure offering is accelerating its revenue growth at a fairly large scale (approaching $4B annual run rate). For the past several years, we have neatly defined the hyperscalers as the Big Three of AWS, Azure and GCP. This has been convenient for investors and analysts alike, as we have only had to track activities within these three. Analysis of independent software infrastructure and security providers could consider each company's product offerings in relation to similar offerings from the Big Three hyperscalers.
Of course, there are other cloud infrastructure providers, like IBM, Alibaba and Tencent, but those have either been country-specific (China) or growing more slowly than the Big Three. Oracle offers a cloud infrastructure platform as well, which has been largely flying under the radar. They entered the market much later than the other players, officially launching in 2018. Because of that, their share of the cloud infrastructure services market was just 2% as of Q2 2022. This ranks them 8th out of the 8 largest providers. However, Oracle Cloud Infrastructure (OCI) is growing faster than most of the other providers and stands a good chance of moving up the ranks. Over time, this could change the dynamic of the Big Three and give investors another hyperscaler to track. 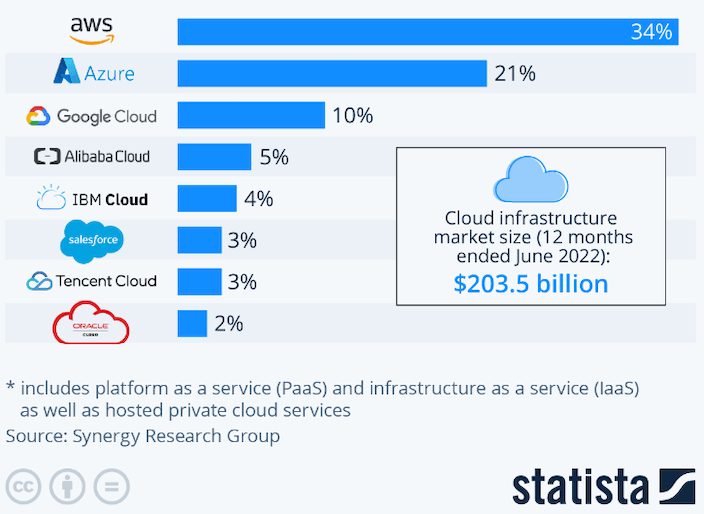 Oracle's recent quarterly report (Q1 FY2023, August 31 end) on September 12th provided some deeper insight into their growth. Total revenue for the quarter was $11.4B, up 18% in USD and 23% in constant currency. This beat their prior guidance by $200M. Pretty good, but not hypergrowth. Additionally, a portion of this comes from their acquisition of Cerner. The hypergrowth is coming from their Oracle Cloud Infrastructure (OCI) business, which mirrors the services of the hyperscalers, providing compute, storage, networking and security. 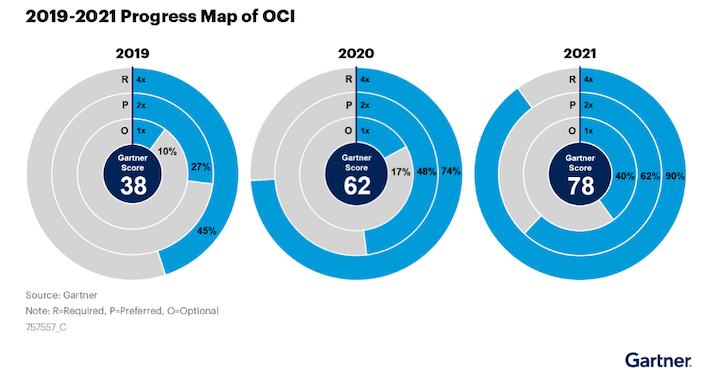 Gartner does point out that OCI is ideally suited for enterprises that have a large investment in Oracle database products, as those are optimized to run on OCI versus other hyperscalers. However, Oracle is building out their capabilities to support a broader set of workloads as well.
"Consequently, Gartner now recommends that cloud architects consider OCI not only for cloud environments that are anchored by workloads that use Oracle technologies, but also for tightly integrated OCI-hosted applications, and potential use for non-Oracle workloads." (Gartner Report, February 2022)
As Oracle grows their share of the cloud infrastructure market, investors will want to watch a few trends:

Of course, investors could also consider taking a position in ORCL itself. The stock has held up relatively well this year, down 24% YTD, versus 28% for MSFT and 35% for CSCO. With their accelerating growth in cloud infrastructure offerings, favorable operating margins and a valuation multiple of 4 P/S, the stock may generate upside going forward if momentum continues and Oracle ascends into the ranks of the other hyperscalers.
cloudmarketplace.oracle.com

Rihard Jarc@rihardjarcSeptember 23
Great point and overview. I just wonder how much of OCI revenue growth came from TikTok, would love that breakdown of top 5 customers.