Dissecting the Markets@dissectmarkets11/16/2022
$99.8m follower assets
Warren Buffett made a mistake by investing in TSMC
There are two investments that I think Warren Buffett will do poorly on: Occidental Petroleum and TSMC.
To sum up my thoughts on $OXY, I think that Buffett is doing the same mistake he did on $COP in 2008 with Occidental Petroleum today.
As for TSMC, I think that Warren Buffett isn't aware that the risk that China's invasion of Taiwan is very high. It's similar to Charlie Munger and his investment in $BABA and how he wasn't aware of the incoming crackdown on tech companies from the CCP in China and Hong Kong.
Buffett and Munger don't have insider information on the upcoming moves of the CCP. Both investors are clearly underestimating the risks that come with doing business with the CCP. Kyle Bass, a hedge fund manager known for criticizing the CCP, sees Chinese equities enduring a similar fate as Russian equities if China does decide to publicly side with Russia in the Ukraine war. And from the looks of the relationship between Xi and Putin, it's obvious that Xi is on Putin's side. So why in the world would Buffett and Munger remain comfortable investing in a region of the world that is most likely to become a war zone in the near future?
Maybe it's because the media and the academic think tanks continue to downplay the chances that China will invade Taiwan. While these sources do hold a high degree of credibility, consider the fact that many of them were denying that Russia will invade Ukraine. Al Jazeera noted this:
"A closer examination of Russia’s geopolitical behaviour in the past two decades, however, demonstrates that its officials might not necessarily be trying to deceive the international community. A full-scale war in Ukraine does not really fit into how the Kremlin has used hard power in its geopolitical games. The examples of Georgia, Syria, Libya, and (so far) Ukraine, show that it pursues a cost-efficient policy."
The Atlantic Council, a major think tank, thought that threats of a barrage of sanctions would deter Russia from invading Ukraine. Others thought that the upcoming spring and summer weather would deter Russia from ever starting a war soon as the mud would make it difficult for them to fight the Ukrainian forces.
It's clear that the think tanks, no matter how much time they spent studying Russia, were wrong when they thought Russia won't invade Ukraine. The media, even if the signs were obvious that Russia will invade Ukraine, gaslighted themselves into thinking that the war won't happen.
Now, let's look at China and Taiwan. In previous memos, I noted China's behaviors during the Zero COVID lockdowns (hoarding of resources, tons of development on new hospitals, forcing the public to cut down on consumption, etc.) as obvious signs of war disguised by the behaviors of China's public health department. I also noted the massive military buildup along the Fujian Province, the province that sits directly across mainland Taiwan. Good thing The New Yorker talked about it in their latest piece on Taiwan, but the commentary they wrote afterward shows that they're gaslighting themselves into thinking that China won't invade Taiwan. 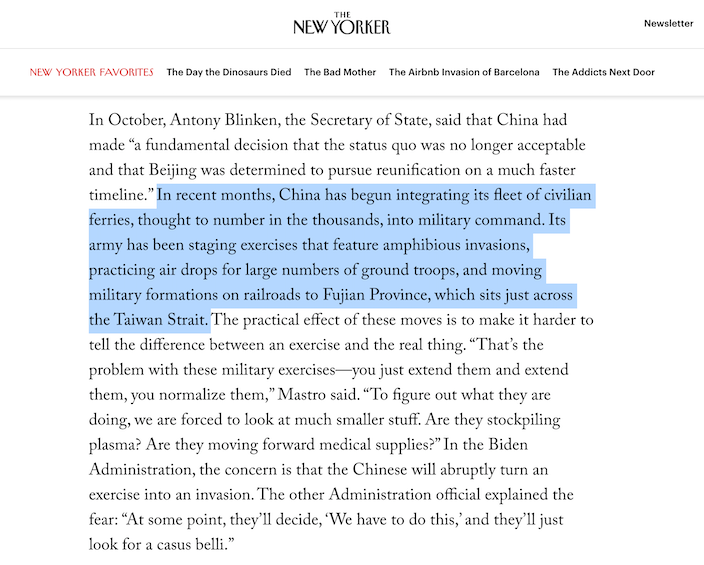 Recently, President Tsai Ing-Wen decried rumors about the risks involved with investing in Taiwan's semiconductor industry. In her view, the concerns about China invading Taiwan will hurt her economy.
Hmm, where have I seen this behavior before? In Ukraine, on January 28:
"Ukraine's President Volodymyr Zelensky has called on the West not to create panic amid the build-up of Russian troops on his country's borders.
He told reporters that warnings of an imminent invasion were putting Ukraine's economy at risk."
Shortly before the Russian invasion, on Feburary 21, 2022, only 20% of Ukrainians surveyed thought the war was going to come to their country. Despite the war in Ukraine, the majority of Taiwanese people are doing their part to step up their preparation for a Chinese invasion, but they still think that Beijing is continuing to do the empty threats that they've been doing for a long time.
Regarding the weather issue, though that issue is bigger when factoring in the probability of China invading Taiwan in the future, I do think that the weather will matter less as the Chinese military will decide to invade from the ports rather than the beaches. All the think tanks, politicians, and media personalities think that China will do a D-Day-style amphibious assault on Taiwan, which requires perfect weather conditions only found in the months of April and October. When considering that China will use ferries to transport most of its military equipment and troops for the invasion, they'll have to use the ports to offload them in Taiwan. Year-round, ships dock in ports that are along the Taiwan Strait. The weather wouldn't be a big issue for China when they plan to invade from the ports. And like Russia, China will probably invade during the times when people expect the weather to deter their invasion plans.
Some will point to Biden's good meeting with Xi in Bali recently. While that good meeting makes Biden optimistic that China won't invade Taiwan, consider that last year, Biden made an agreement with Putin that Russia will withdraw troops from the Ukrainian border, and in exchange, the US won't approve the lethal aid package to Ukraine. Like any authoritarian, I wouldn't be surprised if Xi lied to Biden about reconsidering the Taiwan invasion plans.
The parallels between pre-war Ukraine and Taiwan today are stark. Buffett and Munger probably don't pay attention to the things happening in geopolitics. We all know that Munger, along with Ray Dalio and possibly Chamath, all love China and turn a blind eye to the human rights violations that the CCP has been doing for decades. Warren Buffett has a big stake in BYD, which he's been trimming aggressively lately. At least Buffett is doing his part in stepping away from Chinese equities, like what SoftBank is doing.
Divesting away from stocks that operate in countries run by authoritarians isn't enough to protect you from the risks that these authoritarians have on the world economy. One must also divest capital from the regions that are going to be under threat from those authoritarians to save one's self. Investment managers were probably divesting their stakes in Ukrainian companies in fear that Russia's invasion will destroy their investments. I'm not surprised if fund managers are doing the same with Taiwanese equities, which can help explain the short-selling ban and the downplay of concern regarding capital outflows happening in the country.
From looking at the location of TSMC's fabs, the majority of them are in Taiwan. There are only 2 fabs in China and 1 fab in Washington, USA. The fabs in Arizona will take a few more years to finish construction and the construction of fabs in Lithuania. TSMC will see its production capacity decline by 90% (or more) if China does decide to invade Taiwan soon. Since his investment in TSMC is small compared to the dividends he receives annually from his other investments, I don't think that the fall of TSMC will destroy Berkshire Hathaway.
To end, I'll say that it's best to use your own judgements and observations when using geopolitics to determine the risk it has on your investments. Think tanks have great analysis but they focus more on history than on finding the unexpected outcomes. We don't want the worst outcome to happen, but we have to prepare for it.

Ben@rpinvestments11/16/2022
I think he is aware of the public perception of that risk. And that risk is why it’s trading at a low multiple. Warren likes buying companies trading at discounts for non-business related risks. Think AXP and the salad oil scandal. IMO this was textbook Buffet

Dissecting the Markets@dissectmarkets11/17/2022
Author
@rpinvestments I looked into the salad oil scandal and the difference between the two investments was that Buffett bought American Express when it was undergoing a crisis and he bought TSMC before the crisis even happened.
In a way, Buffett was impatient with his TSMC purchase. Besides war risk, the semiconductor industry is entering a downturn as the shortages are turning into gluts.
Is there a book that dives deeper into Buffett's investments in various blue chip stocks and the timing that he bought them? I remember seeing an excerpt of it on this platform (not sure who posted it) but I can't seem to find it.

Dave Ahern@ifb_podcast11/16/2022
Good analysis and information regarding the potential takeover. Always do your own analysis before buying anything.

Reasonable Yield@reasonableyield11/17/2022
Do you think Buffett made this buy or one of his understudies?

Joshua Simka@tomato11/17/2022
It's a big position--one of $BRKB's top 10 holdings and I agree with @rpinvestments that this seems like pretty classic WEB. I like your reasoned analysis about the geopolitical risk here, @dissectmarkets, but I don't think most out there are being quite as thoughtful as you. Perhaps WEB is disregarding the geopolitical concerns and considers that piece nothing more than media chatter. I wonder if the vote of confidence he's giving $TSM has the potential to lift the chip industry as a whole? (Seeing that $AMD and $NVDA are slightly up this morning)

Dissecting the Markets@dissectmarkets11/17/2022
Author
@tomato I think it could be a vote of confidence for the chip industry as a whole. A false vote of confidence in my view due to the underlying geopolitical risks. If majority of chip fabs go offline, the fabless chipmakers will be giving way more money to the foundries than they ever did just to get some of their chips produced. When accounting for geopolitical risks and market position, Intel looks to have the best risk-reward out of all the chip fabs in my view.

Rihard Jarc@rihardjarc11/17/2022
Bold to call Warren making a mistake, but it is interesting to see given how he focuses on fundamentals and companies that normally behave like that, adding TSMC in the portfolio where the political risk is a big driven of the stock return even in the long run.

Dissecting the Markets@dissectmarkets11/17/2022
Author
@rihardjarc I remember Warren Buffett once saying that we should always bet on America. With that, I'd assume he'd choose to invest in Intel, Texas Instruments, or Micron rather than a Taiwanese company.
And I might be wrong but this could be Buffett's first investment in Taiwan.