Nathan Worden@nathanworden07/31/2020
$335.4m follower assets
No One Gets It Right All The Time
When you first start out investing, you need some guidance. Mentors can help teach you important investment principles and provide some much needed market context.
For me, the Motley Fool was (and still is) a great resource. Back in 2013 I had just signed up for their Stock Advisor newsletter, and one of the first recommendations I saw was for Generac Holdings. $GNRC
Generac makes portable generators, which generally sees spikes in sales around big storms, and then dies off when the weather is calm. The thesis was that because Generac had expanded their distribution network, they were able keep revenue more consistent even during tranquil times.
Team Tom Gardener thought that the aging power grid would lead to home generators becoming more of a necessity for homes and businesses alike.
So I bought in. 8 shares. $52.57 per share. Nothing much happened for the next four years, until... 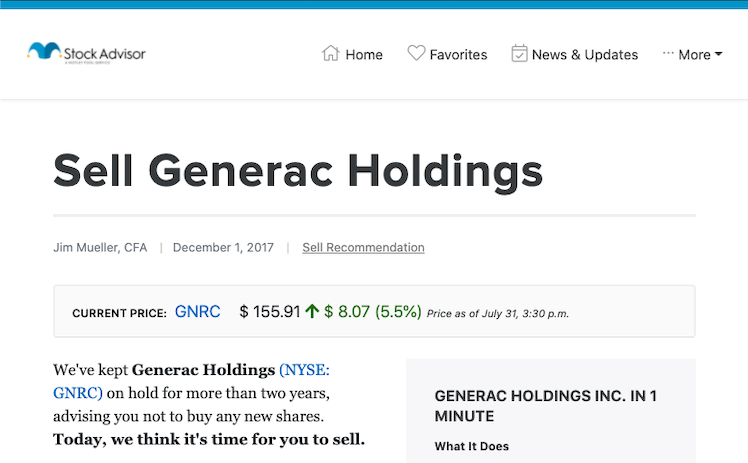 Stock Advisor issued one of their rare 'Sell" recommendations.
Growth hadn't materialized like they thought it would, the stock had gone down, and only recently had it made it back to their recommendation price. So they recommended selling and putting the money to work elsewhere.
What do you do when a mentor tells you to sell something they told you to buy? You keep listening to them right?
Well, by 2017 I had identified what was working for me, which was buying stocks consistently, and, just... leaving them be.
In four years I had never sold a single stock, but after reading the latest Motley Fool recommendation I had my cursor hovering over the sell button in my Vanguard brokerage for the first time.
But I didn't click.
I figured, if this was going to be the first time I ever sold, there needed to be a stronger, clear cut reason. So I shrugged it off, went about my day, and, to be honest, haven't really thought about Generac since.
Fast forward to today. 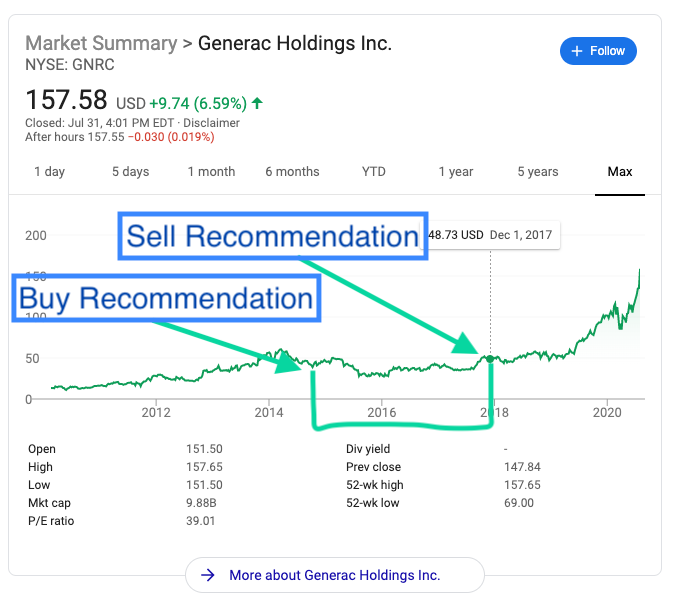 Generac has more than doubled in the two years since Motley Fool sold their shares, and has outperformed the S&P 500 by almost exactly 200%.
The moral of the story? No one gets it right all the time. Not even the Motley Fool. When it comes time to sell, the reason shouldn't be "the stock is the same price now as when I bought it." It also probably shouldn't be "growth hasn't been great in the past four years." Instead, the question to answer (which, granted no one can answer with certainty) is, "what are the future prospects for this company?"

David McDonough@mcd07/31/2020
Um... @nathanworden you should probably talk to your brother @worden.josh ...Don't know if you saw his memo, but he is Second on the leaderboard and I feel like he might actually get it right all the time

Nathan Worden@nathanworden07/31/2020
Author
Ok yeah. HE does get it right all the time. @worden.josh