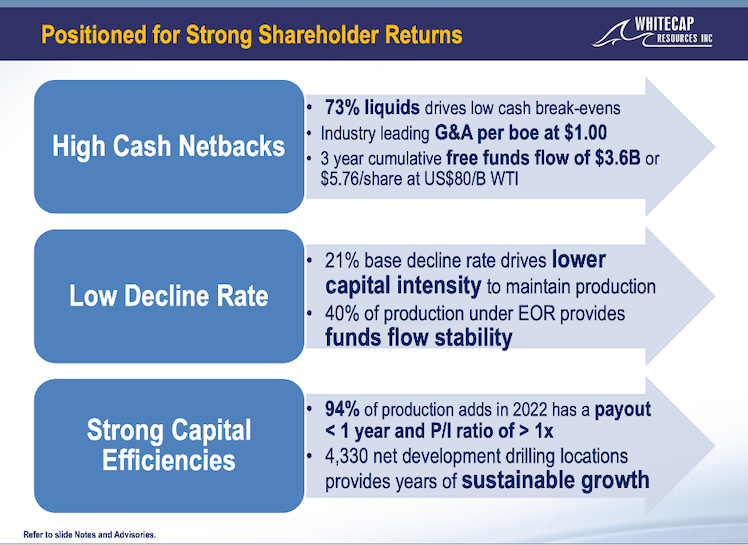 Lately I have been seeing some frustration regarding the lack of upward movement in Whitecap’s share price; dividends aren’t large enough to satisfy shareholders, share buybacks are completed in large blocks and seemingly followed by additional share issuances, resulting in the share count not substantially decreasing. Combine this with recent insider sales and the returns seen elsewhere, and I can understand why some shareholders are frustrated. However, I believe Whitecap offers a unique opportunity that will reward longer term shareholders far greater than companies who are focused on returning cash in a more immediate fashion. Sometimes it’s worth zooming out and looking at the big picture, and you’ll get a better idea what the future of Whitecap holds.
I initially hoped to find a reasonably comparable case so that I could analyze why Whitecap has been lagging some of its competitors in share performance. I concluded that Whitecap is a standalone company, and it would be too much of an ‘apples to oranges’ comparison. Perhaps a better example is to look at the incredible story of Tourmaline Oil, and one can gain a glimpse into what Whitecap’s promising future may look like. 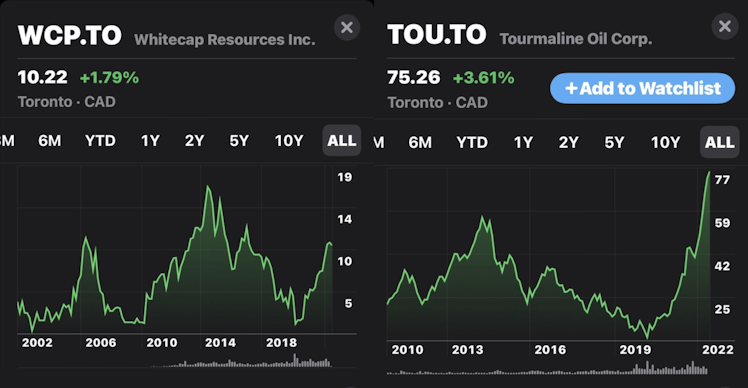 Tourmaline Oil: How a Natural Gas Giant Rose to Power
Founded in 2008, Tourmaline is now the largest natural gas producer in Canada as of 2021, and the fifth largest in North America, however, Tourmaline’s success did not happen overnight. In its early years, the company rapidly bought up very small producers and owners of mineral rights. By the end of 2010, it was one of the largest property owners in the Alberta Basin, and a major Montney producer. The company then quietly absorbed its acquisitions and brought new wells online in 2013, and the following year purchased Santonia Energy’s Deep Basin assets for $189.1 million. To pay for the deal, Tourmaline issued 3.23 million new shares. This brought 221,000 acres of new land under Tourmaline’s control. The company continued its significant growth, including a 2014 joint venture project with CNOR and an acquisition of Perpetual Energy in 2015. Tourmaline gained mineral rights by giving Perpetual 6.75 million shares. The following year, Mapan Energy was purchased for $106 million in stock.
Tourmaline was a steadily growing and successful corporation, but the real game changer was a major acquisition in 2016, with the $1.04 billion purchase of Shell’s non-core mineral assets. The company now gained access to 61,000 acres in the Gundy area, as well as 145,000 acres in the Deep Basin. In 2020, Modern Resources was acquired in a cash and stock deal worth $144 million, and an all-stock deal for Jupiter Resources worth $626 million. Following three other acquisitions worth $1.53 billion, Tourmaline became Canada’s largest natural gas producer, just as natural gas prices doubled. Numerous other assets were purchased in the Montney Formation, the largest being the takeover of Black Swan Energy for $869.5 million. In 2021, a deal was signed with Cheniere Energy to ship natural gas to Cheniere’s LNG plant in Texas beginning in 2023.
Tourmaline’s use of technological developments, including the drilling of horizontal multi-stage fracture stimulation wells, allowed access to the thickest, highest pressured and highest deliverability fine grained sandstone reservoirs of the Montney in the NEBC play area.
The company’s share price rose six-fold between March 2020 & October 2021, and Tourmaline announced a major debt reduction plan, paying a $223 million special dividend to shareholders.
(Source: https://en.wikipedia.org/wiki/Tourmaline_Oil, prices listed are $CAD)
Whitecap Resources: An Oil Giant in the Making
Whitecap was founded in 2009, rapidly growing its daily production from 275 boe/d in 2009 to 14,052 boe/d in 2012. Acquiring Midway Energy for $550 million in 2012, Whitecap followed up with a purchase of Husky Energy’s oil assets in SW Saskatchewan for $595 million. In a deal expected to increase Whitecap’s production by 25%, the company purchased a 62% interest in the Weyburn oil project for $940 million from Cenovus.
Primarily focused on light, sweet crude oil, as opposed to heavy oil or natural gas, Whitecap has amassed a large land position in the Cardium light oil play in central Alberta. The Cardium is among the largest light oil plays in Canada and is generally considered to be a top-ranked candidate for CO2-based enhanced oil recovery (EOR). Much like Tourmaline used horizontal drilling technology and multi-stage fracturing to increase production and profitability, Whitecap has extensive CO2 EOR operating experience from its operations in southeastern Saskatchewan, which should be directly applicable to its extensive Cardium light oil asset base in Alberta. Aided by a regulatory/fiscal climate supportive of CO2 capture and sequestration, Whitecap is well positioned to substantially and sustainably grow its Cardium light oil production via CO2 EOR.
Whitecap’s Weyburn project is backed by years of extensive scientific research and CO2 EOR commercial operating experience, and today is recognized as the world's largest CCUS project for EOR in the world using anthropogenic CO2. EOR generates higher recovery rates than would be achieved otherwise, extracting 30% to 60% more of a reservoir’s oil. Onshore EOR has paid in the range of US$10-16 per tonne of CO2 injected for oil prices of US$15-20/barrel. With oil prices at around US$90/barrel, the economic benefit is ~US$70/tonne. In addition to significantly increasing the amount of oil recovered, it extends the productive life of a maturing field like Weyburn and it is estimated this will extend the life of the field by over two decades. To date, Weyburn has safely sequestered more than 31 million tonnes of CO2.

As one can gather from the success story of Tourmaline, growth requires making multiple strategic acquisitions, either through deploying cash or the issuance of shares. In May of 2021, Whitecap closed its acquisition of Kicking Horse Oil & Gas Ltd. for $300 million (4.5 million Whitecap common shares and $56 million in cash). Kicking Horse’s assets primarily consisted of a condensate rich Alberta Montney development at Kakwa, with current production of approximately 8,000 boe/d (~32% liquids, ~90% of which is condensate). Whitecap continued its long-term strategy of selectively consolidating high quality assets in core operating areas, with these assets well positioned in the liquids-rich portion of the Alberta Montney.

In late 2020, Whitecap formed a strategic business combination with TORC, significantly increasing Whitecap’s scale and core area dominance, making them a market leading light oil player. TORC’s asset base fit directly into Whitecap’s core areas, creating one of the largest pure play conventional light oil producers in Canada with over 100,000 boe/d (78% oil and NGLs) of corporate production. Under the terms of the agreement, shareholders of TORC received 0.57 Whitecap common shares in exchange for each TORC common share held. With a focused Western Canada asset base exhibiting lower production declines, high operating netbacks and strong capital efficiencies, Whitecap continued its positioning as an industry leader.
In early 2021, Whitecap closed its acquisition of NAL Resources Limited (a wholly own subsidiary of Manulife), in an all-stock transaction valued at approximately $155 million. NAL’s oil and gas operations in Alberta and Saskatchewan were producing approximately 27,000 boe/d (55% oil and NGLs). Whitecap issued roughly 58.3 million of its common shares to Manulife Financial Corp. for all issued and outstanding shares of NAL. The deal to acquire NAL, which produces oil and natural gas in Alberta and Saskatchewan, furthers Whitecap's strategy of consolidating assets in its core Western Canada operating areas. The all-stock transaction further improved upon Whitecap’s strong financial position, decreasing Whitecap’s leverage ratio by 25% in 2021. 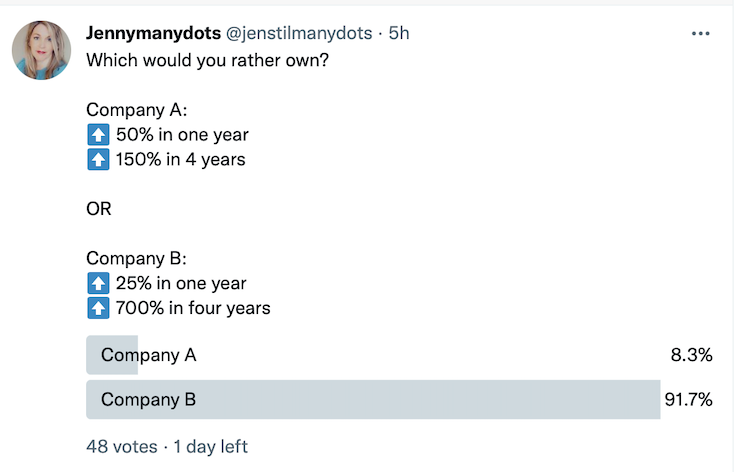 I found this morning’s poll results rather surprising, given the rumblings I have seen about Whitecap’s short-term share performance. It’s worth noting that Tourmaline spent several years completing strategic acquisitions through the deployment of cash and common shares. Whitecap appears to be employing the same strategy, wisely accumulating a strong asset base in the best producing formation in Canada which will perform exceptionally well in the long term. They do so while completing NCIBs as promised, issuing a decent dividend to shareholders, and reducing debt. If shareholders are disappointed in a lack of short-term profit, they would be better to invest in “Company A”. It’s all a matter of personal preference of course, but if oil ends up in a multi-year bull run as Eric Nuttall suggests, Whitecap stands to reap the rewards of taking a long-term view. Rather than deploying cash directly to a shareholder’s pocketbook in 2022, they are increasingly positioning themselves to remain a top producer with slow-declining, ESG-friendly, exceptional assets. When that day arrives, I will be glad I purchased my shares sub $10, just as Grant Fagerheim did recently – because Tourmaline torque is within the realm of possibility. 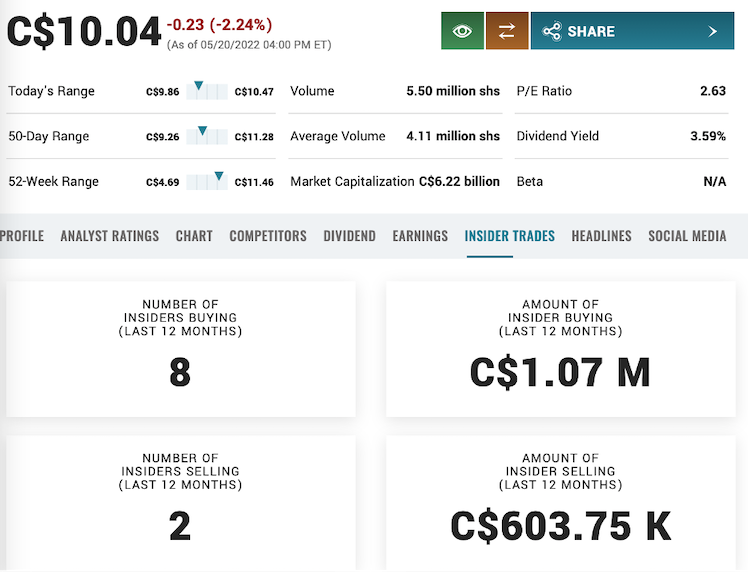 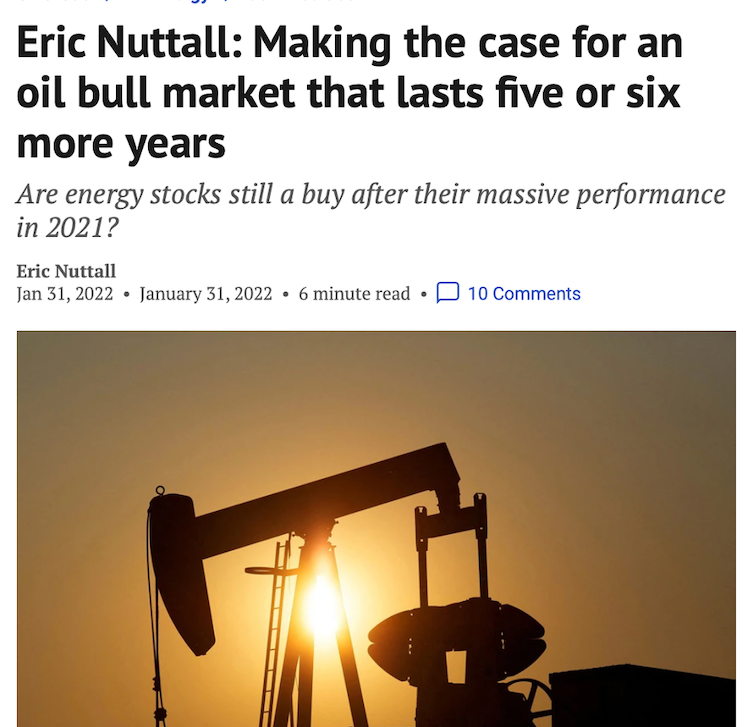 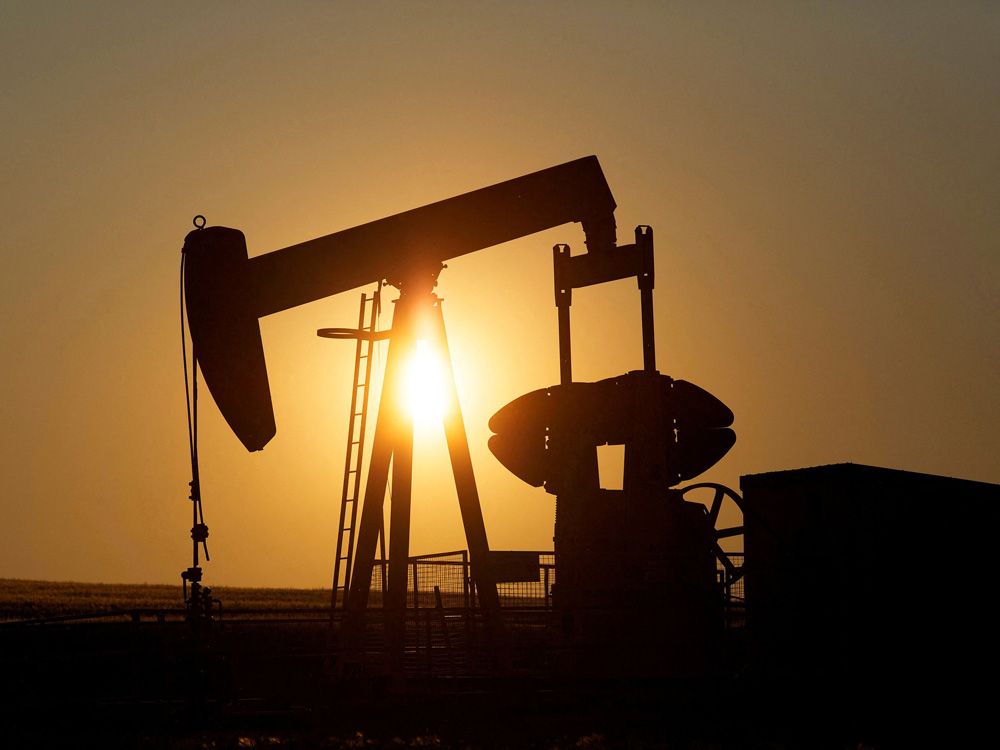 financialpost
Eric Nuttall: Making the case for an oil bull market that lasts five or six more years
Are energy stocks still a buy after their massive performance in 2021?
No comments yetBe the first to add your insight!