SBSW is cheap right now. There are good reasons for that, but one is about to disappear and an opportunity to be a first-mover on the global stage could offer investors significant upside.
Let’s go over the big wart on the company’s face first, because if you can’t get over that then you won’t want to take it home to meet your portfolio. 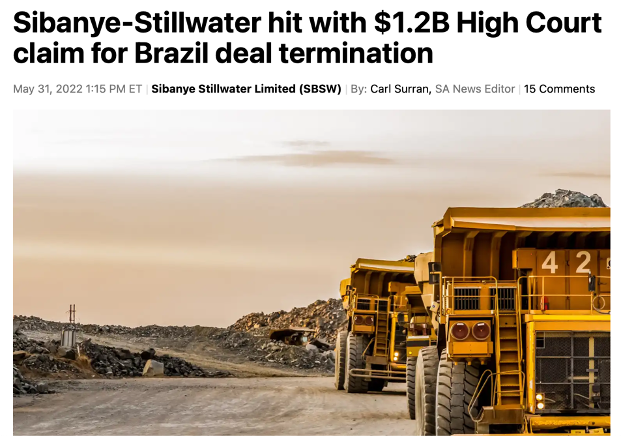 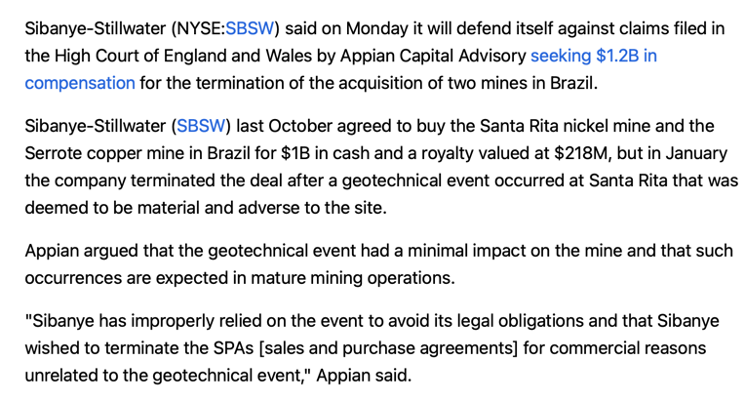 Appian Capital’s $1.2B claim against Sibanye-Stillwater threatens to wipe out more than a quarter of the South African mining company’s annual core profit.
Given that corporate lawsuits on average take 2-5 years to settle and the results are completely unpredictable to investors, let’s go under the assumption that this dispute is either factored into the current share price. What’s the possible outlook for the company? Prior to being served court documents, that outlook was rather positive.
Sibanye-Stillwater strike on the verge of a breakthrough
KURHULENI - The three-month strike over wages at Sibanye-Stillwater is on the verge of a breakthrough after workers accepted a wage increase of up to a thousand rand. Thousands of mineworkers at Sibanye’s Carletonville gold mining operations have been on strike since April amid a standoff with bosses.
Sibanye-Stillwater described this breakthrough as a positive step toward signing the three-year deal and an official response is expected soon.
It appears a three-month strike by South African workers will be resolved very shortly, and the resolution should provide some long-term stability for the Carletonville mine, with a three-year agreement in place.
With unpredictable and lengthy legal proceedings in the background and the strike being resolved, let’s cover what there is to like about the company – because I believe that’s rather substantial.
About Sibanye-Stillwater
Sibanye-Stillwater is a major platinum group metals producer and gold miner.
CEO Neal Froneman is widely regarded as a “maestro of the deal” and has been on an acquisitions juggernaut. The company is looking to diversify its portfolio of properties and become a major player in “green metals”. Sibanye has also been reducing its portfolio exposure to South Africa’s high-risk investment environment. 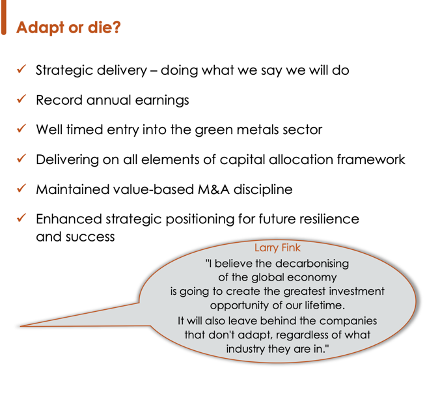 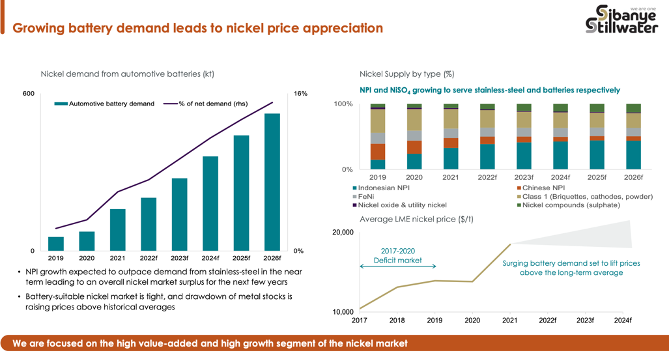 In a May 8th SeekingAlpha article, Pearl Gray Equity and Research stated that SBSW has been a victim of mining stocks facing a systemic downturn, with decreasing metal prices and slowing economic activity in China. The Carletonville strike added an idiosyncratic risk premium to the stock, and the recent drawdown was overdone on both fronts. Pearl Gray suggested considering the company’s long-term potential, rather than short-term wobbles, so that investors see the significant opportunity as fundamentals suggest performance will remain robust.
SBSW business model is complex, and the balance sheet is difficult to understand. Palladium, platinum, and rhodium are produced in the USA but most of the company’s revenue comes from South Africa. Investors should therefore consider currency fluctuation between the US dollar and the SA Rand ZAR.
In early March of this year, SBSW posted a record full-year profit of $2.5B, an increase of 27% over 2020. The company ended 2021 in a robust financial position, with cash and cash equivalents of $1.9B, exceeding borrowings of $1.2B and resulting in a $719M net cash position with the net cash adjusted EBITDA ratio at 0.17x.
The stock’s CAPM and Beta coefficient suggest that SBSW is more volatile than most, and it’s overly sensitive to the broader market. However, it’s recent selloff is due to transitory issues. With the labour issues resolved, production and profitability will pick up. 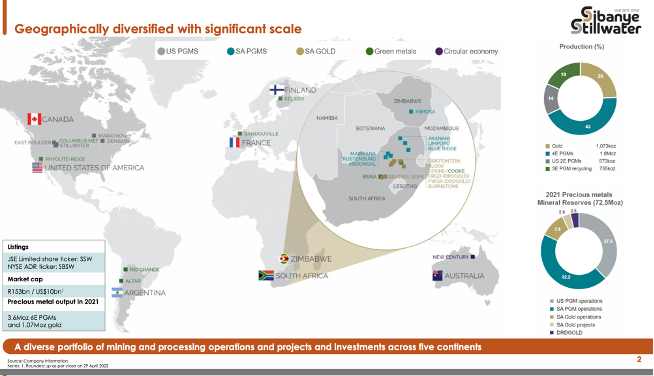 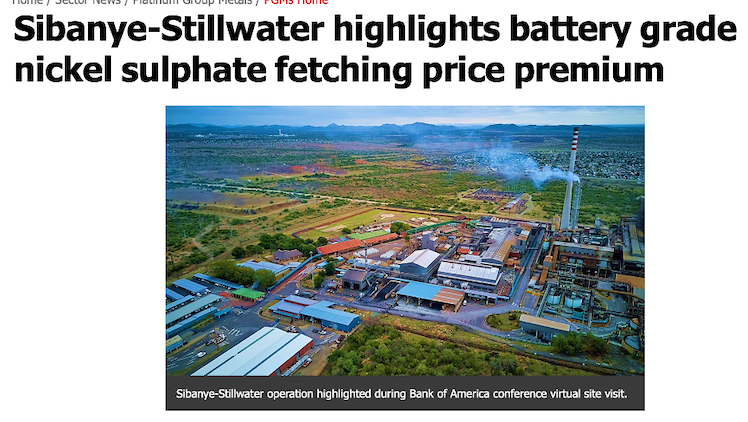 Nickel & Cobalt
At the beginning of this article, I referenced an opportunity that could give Sibanye Stillwater a first-mover advantage globally. The company is currently looking to acquire high grade nickel assets in safe jurisdictions but it was their profit-sharing arrangement with Thakadu Battery Materials that piqued my interest in the company. Sibanye-Stillwater has highlighted the quality elevation of its price-discounted nickel sulphate crystals to price-premium battery grade, through the introduction of the Thakadu Battery Materials operation into the Base Metal Refinery in North West province.
Thakadu sources crude nickel sulphate crystals from SBSW, recovering cobalt that was previously lost. Thakadu has succeeded in turning a PGM-linked solution into sought-after battery material, adding to revenue generation. Thakadu has the economic advantage of processing at the source, within a long-standing PGM’s processing environment.
“As a producer of high-quality, high-purity battery-grade nickel, Thakadu receives a business-to-business price, with customers in China, Japan, Korea, Europe and Latin America giving a price premium over the LME’s nickel price. When the cathode-focused product gets to export destinations, development into precursor materials requires even more advanced chemistry. Depending on the chemistry, it could become, for example, nickel-cobalt-aluminium oxide, or nickel-cobalt-manganese, at the different combinations used in different batteries.”
Lithium
In February of 2020, Sibanye Stillwater secured entry in the battery metals sector through a partnership with and investment into Keliber, a leading European lithium project. According to Froneman, the investment offered “the opportunity for further geographic diversification in an attractive mining destination” with established industry players sharing a vision of supplying the EV battery chain. The company also participates in a 50/50 JV with Ioneer, developing the Rhyolite lithium-boron project in Nevada.
Zinc
In December 2021, SBSW finalized an agreement to acquire a 19.99% shareholding in New Century Resources Limited. Wishing to build on their strategy of leading the global tailings retreatment business, the stake in New Century added an impressive management team that had developed a globally significant zinc producing business through the reprocessing of tailings.
Platinum Group Metals
Sibanye Stillwater is the third largest global platinum producer and the share price tends to track the price trends of platinum and palladium closely. Russia’s Nornickel’s 2.7 million ounces of palladium production account for approximately 28% of the world’s supply. As a producer of many of the metals that Russia exports, continued global tumult is bullish for Sibanye. Investors looking for an inflation hedge may also look to platinum as one of the last undersaturated inflation trades left.
"PGMs will be guided by semiconductor availability, the lack of which crippled auto sector growth this year. Market news suggests chip shortages could continue into H1 2022, leaving little hope for a near-term revival of auto catalyst demand. Against this backdrop, we see platinum outperforming palladium due to its broader demand exposure,” analysts at ANZ wrote in a research note last month.
SBSW’s Rustenberg and Marikana PGM mines in South Africa and its Stillwater mine in Montana are its main earnings drivers. Reserve mine life for Rustenberg is 32 years, Marikana has over 40 years left, and Stillwater has 25 to 39 years left (3 deposits). With the long lives of these core assets, cash flow should be secured for decades to come.
SBSW’s balance of platinum and palladium production insulates the company from significant price shifts between the two metals, as a loss on one is a gain on the other.
Gold
Sibanye’s South African gold operations produce about 1 million ounces per year, enough alone to make it a gold major. With fundamental outlooks in other metals looking more promising than gold, management has leveraged its mining and processing expertise to expand the business and meet the needs for critical metals in the West.
While many of its peers have seen production decline, Sibanye’s overall metal production has increased. Improved margins through expanding their processing capacity has resulted in stellar sales and cash-flow growth.
Dividends
The company recently declared a dividend payout at the upper end of the 25-35% payout range, with a yield of 9.8%, demonstrating management’s confidence in future financial performance. 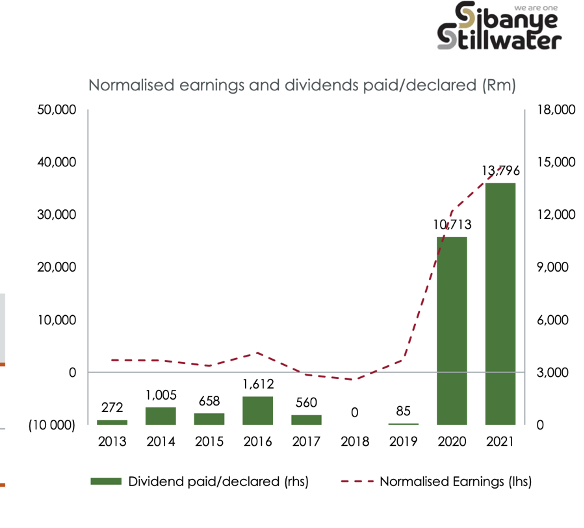 Sibanye Stillwater is a very complex company, with a diversified and growing green & global portfolio. It requires a great deal of due diligence and during my research for this piece I found several sources offered differing perspectives on the risks and rewards of the company. However, all accounts shared the consensus that the share price is currently undervalued. With a strike resolution on the horizon, this appears to be an attractive entry point for investors who are willing to accept the risks of an unpredictable lawsuit settlement and the share price’s correlation to global events. With a high dividend, a growing producer of critical new technology metals, and a strategic growth plan, the value of Sibanye Stillwater is a compelling proposition.
https://seekingalpha.com/news/3844159-sibanye-stillwater-hit-with-12b-high-court-claim-for-brazil-deal-termination
https://seekingalpha.com/article/4508722-sibanye-why-were-buying-the-dip
https://seekingalpha.com/article/4504395-sibanye-stillwater-sbsw-stock-attractive-play
https://www.sibanyestillwater.com/news-investors/news/transactions/keliber/
https://www.miningweekly.com/article/sibanye-stillwater-highlights-battery-grade-nickel-sulphate-fetching-price-premium-2022-04-01
https://capital.com/palladium-price-forecast-and-market-outlook 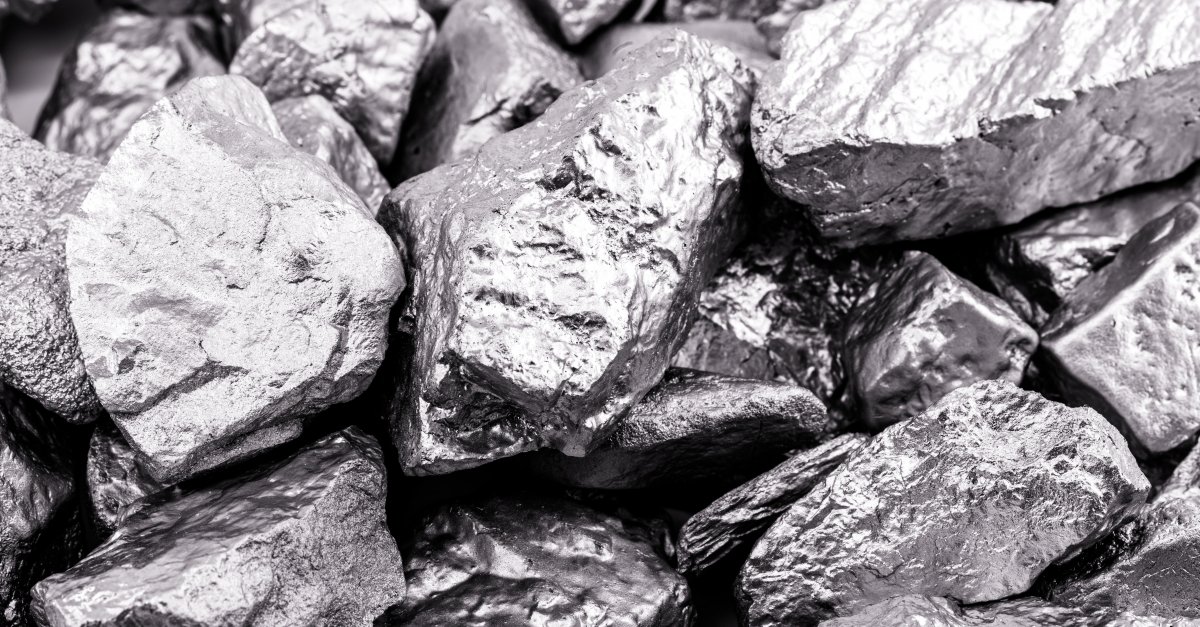 capital.com
Palladium Price Forecast | Is Palladium a Good Investment?
The metal is struggling to regain 2021 highs amid weak automotive demand. As supply is projected to grow, what’s the latest palladium price forecast?
No comments yetBe the first to add your insight!