The Science of Hitting@tsoh_investing11/17/2022
$35.9m follower assets
Airbnb: "A Bridge Too Far"?
This is an extended preview of today's write-up, exclusively for Commonstock readers. To read the remainder of the post, please subscribe to the TSOH Investment Research service.
https://thescienceofhitting.com/p/airbnb-a-bridge-too-far
I think that we learned a lot of lessons a year or two earlier than a lot of other tech companies because we were hit so hard so early [at the outset of the pandemic]… The adversity and the challenges that we [faced in early 2020] just made us much more focused, and a much better company.”
Airbnb CEO Brian Chesky, Q3 FY22 call
On Airbnb’s Q4 FY20 conference call, management set a long-term EBITDA margin target for the business of 30% or greater. The following chart, which shows Airbnb’s TTM adjusted EBITDA margins over the past two years, provides a clear indication of how much progress the business has made against that objective as of late (note that this is Airbnb’s definition, which I’ve used for the sake of comparability to the Q4 FY20 targets; the adjusted EBIT number I’ve shown you in the past, and will continue to use in the future, accounts for some real costs that management has chosen to exclude). 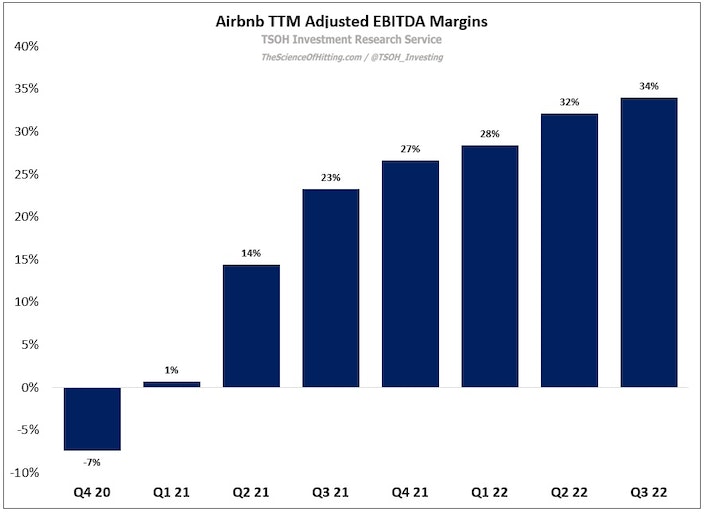 Airbnb’s success over the past two years, with TTM EBITDA margins up ~4,000 basis points since Q4 FY20, is attributable to three key factors: (1) a resurgence of nights & experiences (N&E) booked; (2) higher average daily rates, or ADR’s, and (3) significant improvement on the expense structure.
On the first point, Q3 FY22 N&E booked were 99.7 million, up 25% versus the year ago period. This strength was broad based, with each of the four geographic regions reporting N&E growth of 20% or higher (and with all regions back above pre-pandemic volumes after excluding the domestic China business from APAC). As I’ve discussed in the past, this success is attributable to the “inherent adaptability” of Airbnb’s model / platform; as guest demand shifted in various ways throughout the pandemic, supply (hosts) have adapted to accommodate new use cases. In the early days of the pandemic, volumes shifted to domestic, non-urban travel, notably for longer trips (with stays of 7+ days accounting for half of all Airbnb bookings in 1H 2021). As we’ve moved further away from the pandemic, Airbnb has seen improvements in cross-border travel (+58% YoY in Q3) and in high-density urban travel (+27% YoY in Q3). Overall, the result has been an increase in platform volumes; in Q3 FY22, TTM N&E booked on Airbnb were 379 million – up ~16% from the pre-pandemic peak and up ~2x the FY20 lows. 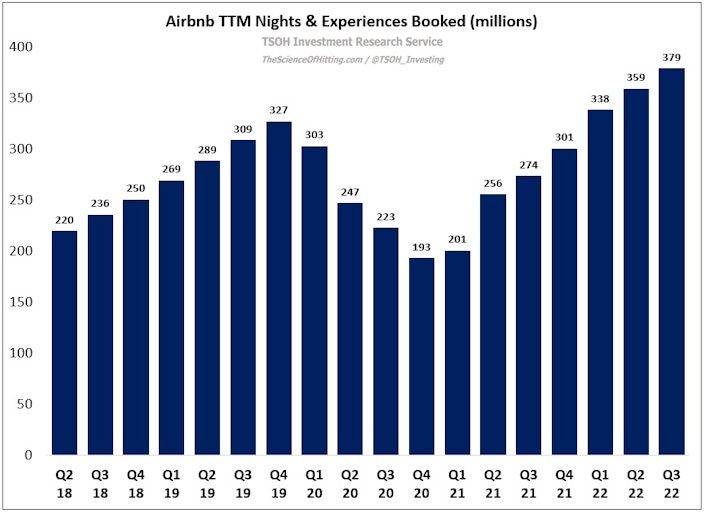 On the second driver, Airbnb has greatly benefited from higher rates, or ADR’s (to be clear, Airbnb isn’t involved in setting rates; that’s decided by the host). In Q3 FY22, Airbnb reported global average daily rates of $156 per night – up nearly 40% from pre-pandemic levels (Q3 FY19). While this has clearly been a significant tailwind over the past 18 months, I think Mr. Market rightly harbors some concerns about its sustainability - particularly if we’re facing a more difficult macroeconomic environment where remote workers may consider it prudent to tighten their purse strings. (As I noted in the Q2 Airbnb update, “About two-thirds of that increase - the 40% lift vs Q2 FY19 - has been price appreciation, and about one-third has been mix.”)
This comment, from Chesky on the Q3 call, was noteworthy: “We do see that many Hosts bring their prices up or down as demand goes up or down. That said, I think there are opportunities for us to have more dynamic tools and to give more visibility that would make prices even more competitive… Hosts do adjust their prices, but I think Hosts probably adjust their prices less frequently than hotels. And so, in periods of time where prices are generally coming down in the industry, we might be a little bit slower…” 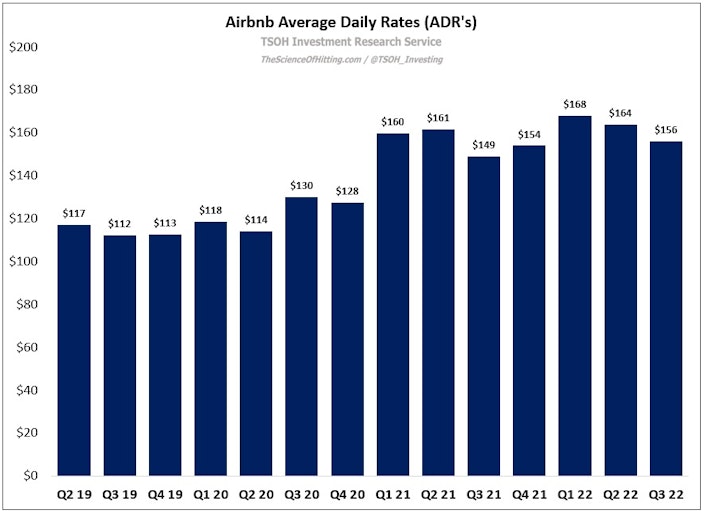 The third lever that’s driven significant improvement in Airbnb’s profitability over the past two years has been a refined cost structure. The most notable area is on advertising spend, and specifically performance marketing (“continue to focus on the overall brand of Airbnb and to be less reliant on search engine marketing… 90% of our traffic remains direct or unpaid”). 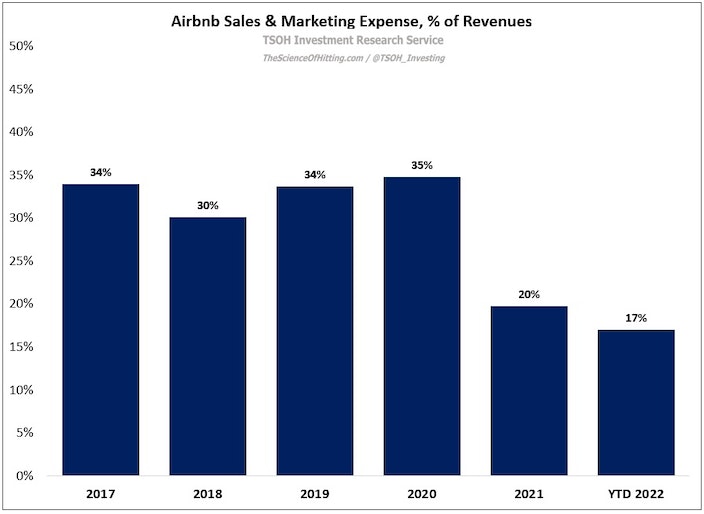 As noted in the quote at the top of today’s post, I think Airbnb finds itself in a stronger position than many of its tech peers because they experienced pain earlier on in the cycle (and to be fair, they’re experiencing less pain now); their business imploded in early 2020, which required management to take aggressive action. They haven’t forgotten the painful lessons learned in the early days of the pandemic - and it’s showing in the FY22 results.
Product
One of the big changes announced at Airbnb in recent weeks is more transparent pricing for guests. As Chesky noted on the Q3 call, “You're going to see more of a fully loaded rate, and then our search ranking is going to prioritize great value and great deals at the fully loaded price.” Up until this point, the stated rate for a listing excluded two important charges: the cleaning fee (set by the host) and the service fee (set by Airbnb). Now, when a user is browsing listings, they will see a more accurate representation of the all-in price that they’re going to pay (before taxes). To give you some sense for what that means in numbers, I pulled up ten listings to compare the stated rate with the fully loaded price; on average, the fully loaded nightly rate (inclusive of the service fee and the cleaning fee) was roughly 25% higher than the stated nightly rate. The company has fielded complaints from users about this exact issue for many years; the fact that they took so long to address it is revealing. Time will tell if this tweak in product design has a material impact on consumer behavior / guest booking conversions.
On a brighter note, I thought this comment from Chesky was noteworthy:
“I want AirCover to be the gold standard for customer service in our category.”
I’ve written previously about new product features at Airbnb like Categories and I’m Flexible; Aircover protection for hosts and guests is another notable example of how the company can expand its moat (to maintain the leading mind share that it has earned with millions of hosts and guests globally).
(End Of Preview)
https://thescienceofhitting.com/p/airbnb-a-bridge-too-far
thescienceofhitting.com
Airbnb: "A Bridge Too Far"?
“I think that we learned a lot of lessons a year or two earlier than a lot of other tech companies because we were hit so hard so early [at the outset of the pandemic]… The adversity and the challenges that we [faced in early 2020] just made us much more focused, and a much better company

Christian@christian762111/17/2022
Last week you did Disney, this week was Airbnb. Doing all my holdings lol. I love that they don’t spend a lot on advertising. I love them be less reliant on search engine marketing. They dojng all this directly or unpaid and that helps so much with their margins. I also absolutely love what has happened the last few weeks. With the price changes and air cover. This company always innovates and tries to make it easier for the customer and even their hosts. Brian is a fantastic ceo. I’m going to tag @stockopine because he’s a huge Airbnb fan so he can read this as well. Good work!

StockOpine@stockopine11/17/2022
@christian7621 thank you for the tag. Just read this excellent preview of $ABNB by Alex 👌🏼

Brett Schafer@ccm_brett11/17/2022
Have they mentioned anything about growth of experiences as a % of overall bookings?

The Science of Hitting@tsoh_investing11/18/2022
Author
@ccm_brett Still very tiny. Optimistic words every so often, but I don't think they've really cracked the nut on this one yet (they're not alone...)

Rihard Jarc@rihardjarc11/17/2022
They are probably one of the future "FAANGS" (thought today it's probably not named FAANG anymore.)

Nathan Worden@nathanworden11/20/2022
@dissectmarkets The Science of Hitting / Alex Morris is a gem— such great work!

Dissecting the Markets@dissectmarkets11/17/2022
I remember during the early days of the pandemic, as Airbnb was laying off contractors and employees, Brian Chesky was worried that these layoffs will permanently alter the company's culture in a negative way. Seeing that the company is stronger than ever financially, I hope that they can remain on top of the industry. If the culture shock from the pandemic layoffs does hurt the innovative potential of Airbnb, I will start being concerned about the business and its ability to fend off against the upcoming competition.

Jensen Butler@jensen11/17/2022
Love this post. Win or lose on my bet I love $ABNB and the shakeup it’s created. I think Chesky is exceptionally in tune with market appetite and seemingly has solid foresight. I like his poise as he’s navigated the last 3 years of turbulence for his sector specifically

The Science of Hitting@tsoh_investing11/18/2022
Author
@jensen Thanks for the kind words Jensen - and agreed!