Jennifer@jennymanydots10/05/2022
$26.1m follower assets
Do Billionaires Know Best?
As global warming melts the ice that covers 80 percent of the island, it has spurred demand for Greenland’s potentially abundant reserves of hard-to-find minerals containing elements with names like neodymium and dysprosium. These so-called rare earths, used in wind turbines, electric motors and many other electronic devices, are essential raw materials as the world tries to break its addiction to fossil fuels.
China has a near monopoly on these minerals. The realization that Greenland could be a rival supplier has set off a modern gold rush.
Global superpowers are jostling for influence. Billionaire investors are making big bets. Mining companies have staked claims throughout the island in a quest that also includes nickel, cobalt, titanium and, yes, gold. 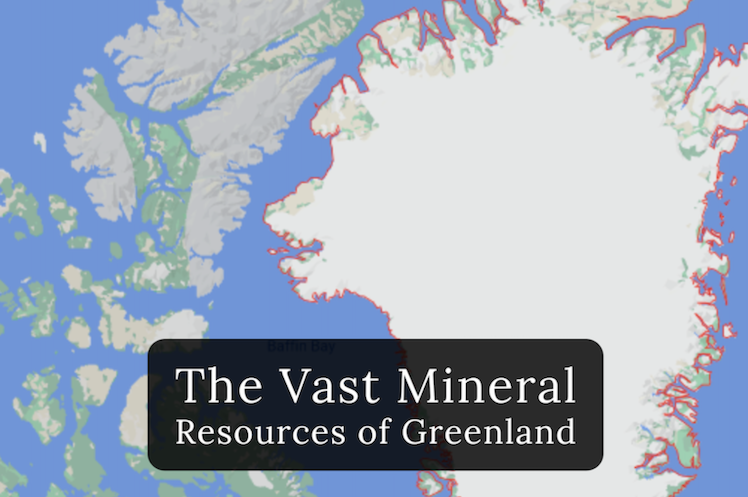 Given my preference for higher risk/reward plays, I often try to mitigate some of the risk by “following the smart people”. Management with a proven track record are much more likely to experience success, and in return of course, so am I. In the mining sector I am partial to Pierre Lassonde, Robert Friedland, the Lundin family, Craig Parry & Inventa Capital, as well as a few others--but I was rather interested when I came across an article in August that included some even bigger names.

https://www.businessinsider.com/some-worlds-billionaires-backing-search-for-rare-minerals-in-greenland-2022-8
KoBold Metals, a mineral exploration startup powered by AI, is looking for rare and precious metals and minerals beneath Greenland's melting ice that can be used to build electric cars and renewable batteries.
"We are looking for a discovery that will be one of the largest, most significant nickel and cobalt deposits in the world, potentially capable of powering 100 million EVs," a spokesperson for KoBold Metals, told Insider.

_"Fully electrifying the global economy is our generation's greatest challenge," the KoBold spokesperson said. "Partnering with this broad set of world-class investors will accelerate our efforts to find the key materials for the EV re a concern to witness the consequences and impacts from the climate changes in Greenland," Bo Møller Stensgaard, CEO of Bluejay Mining, told CNN. "But, generally speaking, climate changes overall have made exploration and mining in Greenland easier and more accessible."**
If the brilliant minds of Gates & Bezos have taken positions in Greenland, should the retail investor follow suit? In this case, it might be better to sit on the sidelines until some deeper pockets have paved the way first.
“This is one of the most beautiful places in Greenland,” Ms. Paviasen said. “It’s worth fighting for.”
“We will stop the mine.”

https://www.nytimes.com/2021/10/01/business/greenland-minerals-mining.html
Those expecting to exploit the island’s riches will have to contend with Mariane Paviasen and the predominantly Indigenous residents of the village of Narsaq.
Until she was elected to Greenland’s Parliament in April, Ms. Paviasen was manager of a heliport that provided one of the few ways to get to Narsaq, a village at the mouth of a fjord on the island’s southwest coast.
In April elections for Parliament, Ms. Paviasen and her protest group overcame a determined lobbying effort by the mining company, Greenland Minerals, and swayed public opinion in favor of a party that promised to stop the mine.
The victory for Ms. Paviasen and her alliance of sheep farmers, fishermen and other residents sent a signal to all those eyeing Greenland’s mineral wealth.
The lesson was that any project that threatened the environment or livelihoods was going to run into trouble from local people who were quite capable of standing up to powerful interests. 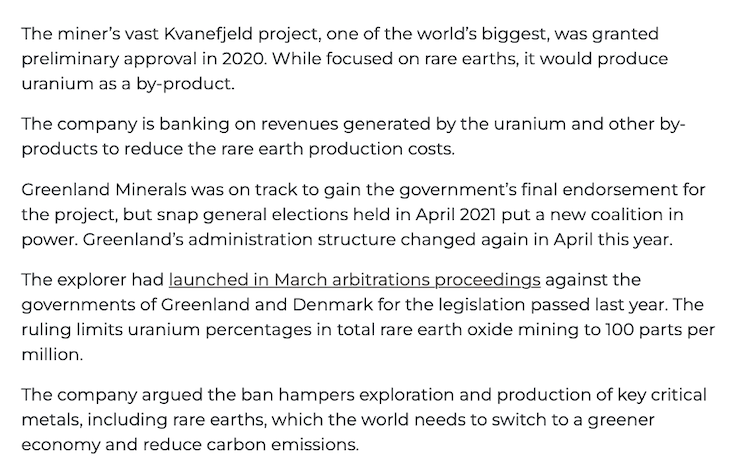 https://www.mining.com/greenland-minerals-to-fight-draft-rejection-of-mining-permit-for-rare-earths-project/
Narsaq residents were initially in favor of the nearby mine, attracted by the promise of badly needed jobs. “They said people in Narsaq would be rich because of the mine,” said Niels Sakeriassen, who manages the fish processing plant.
But opinion shifted as people learned more about the project. Tailings from the open-pit mine would be deposited in a lake that lies above the town. Narsaq residents distrusted assurances by Greenland Minerals that a dam would keep radioactive water from reaching their homes.
Some local people support the mining project, though they tend to be less visible. “It’s about jobs, work, a lot of money for the local people,” said Jens Karl Petersen, a cook in Narsarsuaq, a former U.S. air base about 30 miles from Narsaq.

Reflecting Greenland’s newfound stature, the United States has recently stepped up its diplomatic presence. Antony J. Blinken visited Greenland in May, four months after being named President Biden’s secretary of state, meeting with members of the newly elected Greenland government. Last year, the United States opened a consulate in Nuuk, the capital, for the first time since the 1950s. A delegation of U.S. officials visited Greenland last month and pledged aid to improve trade, education and the mining industry.
Leaders of the new government in Greenland see the country’s ore as a means to work toward financial independence from Denmark. Greenland has a Parliament that oversees domestic affairs, but Denmark determines foreign policy and subsidizes the Greenland budget with 3.9 billion Danish kroner per year, or about $620 million.
Mining executives say they are aware of the need to pay attention to climate concerns.
Some mining companies see a chance to establish Greenland as a reputable source of the raw materials for emissions-free power generation and transportation. “You can do it the right way,” said Bo Moller Stensgaard, a former Danish government geologist who is the chief executive of Bluejay Mining.
I had put this one on the backburner, content for now to let Gates and Bezos prove that Greenland was an investable jurisdiction. However, I occasionally peruse the tickers on the TSX-V to find a new and exciting play I haven’t discovered yet and came across one that perhaps has limited my patience for Bill and Jeff. 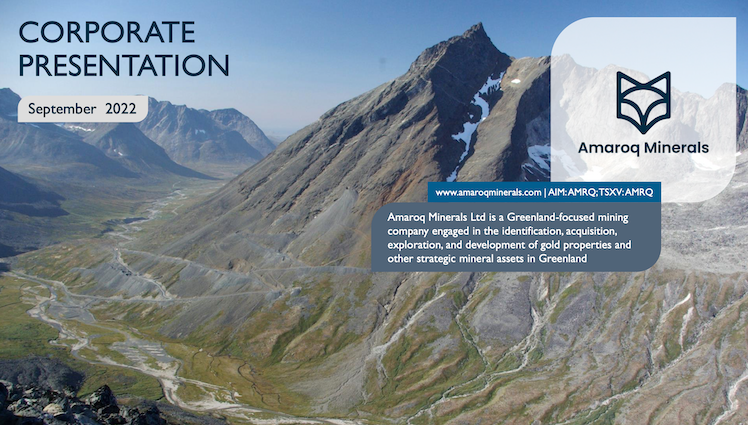 Amaroq Minerals Ltd. Sept. 6 announced an updated mineral resource estimate that shows its flagship Nalunaq project in Southern Greenland hosts one of the highest-grade gold deposits on Earth.
"Nalunaq now sits in the 98th percentile in terms of reported gold resource grades globally, making it one of the highest grade gold mines in the world," added Olafsson.
Due to the high-grade nature of Nalunaq, Amaroq says this deposit is relatively insensitive to cut-off grade and remains robust at a range of gold prices.
https://www.miningnewsnorth.com/story/2022/09/09/news-nuggets/very-high-grade-gold-deposit-in-greenland/7528.html
There's a lot to like about Amaroq. I haven't taken a position yet but will be looking closely at it this week and thought I would share it with others, as I feel it's one that's probably too good to pass up.
MANAGEMENT WITH A PROVEN TRACK RECORD (CHECK) 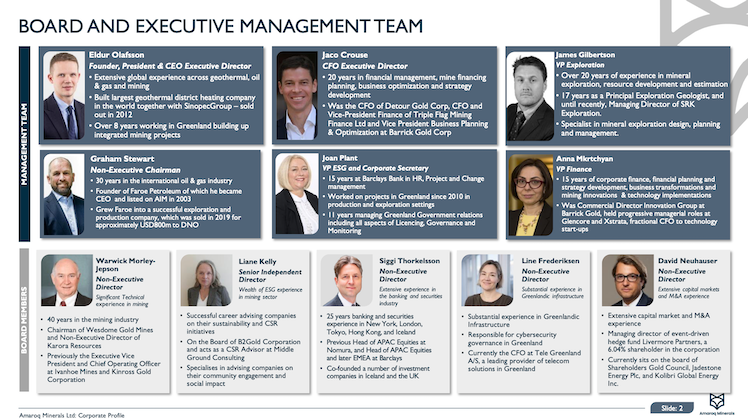 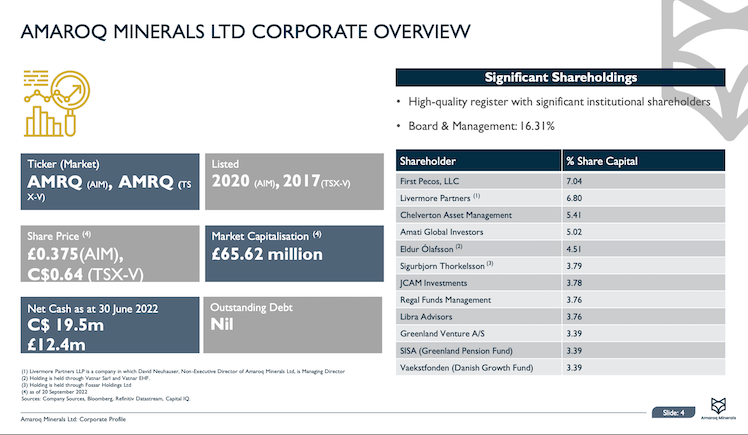 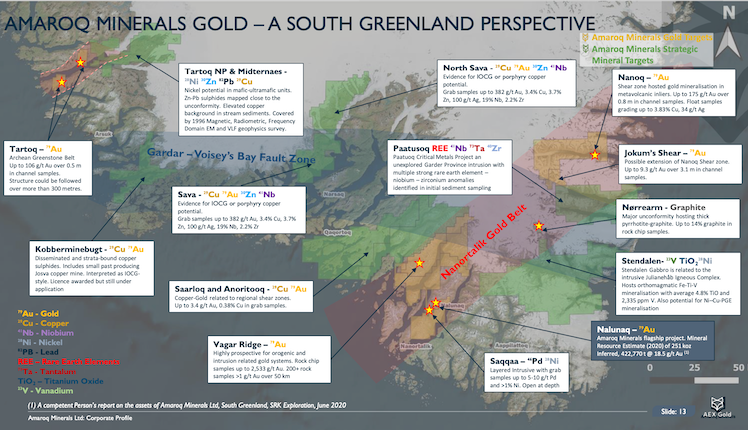 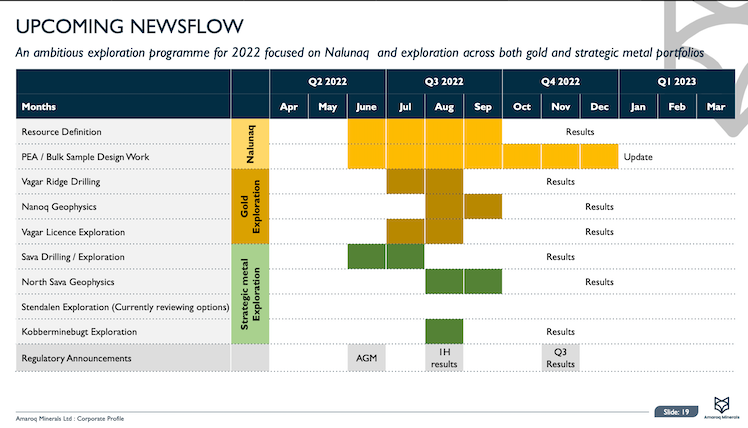 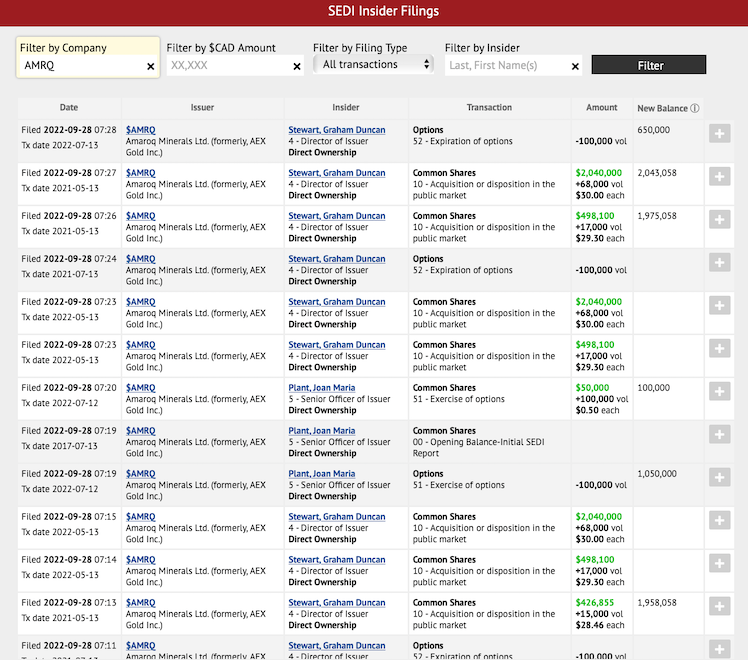 Sorry Bill & Jeff, Windows operates well & Prime might have a reliable delivery time, but I'm not sure you can beat Amaroq to the punch on this one. Best of luck though. 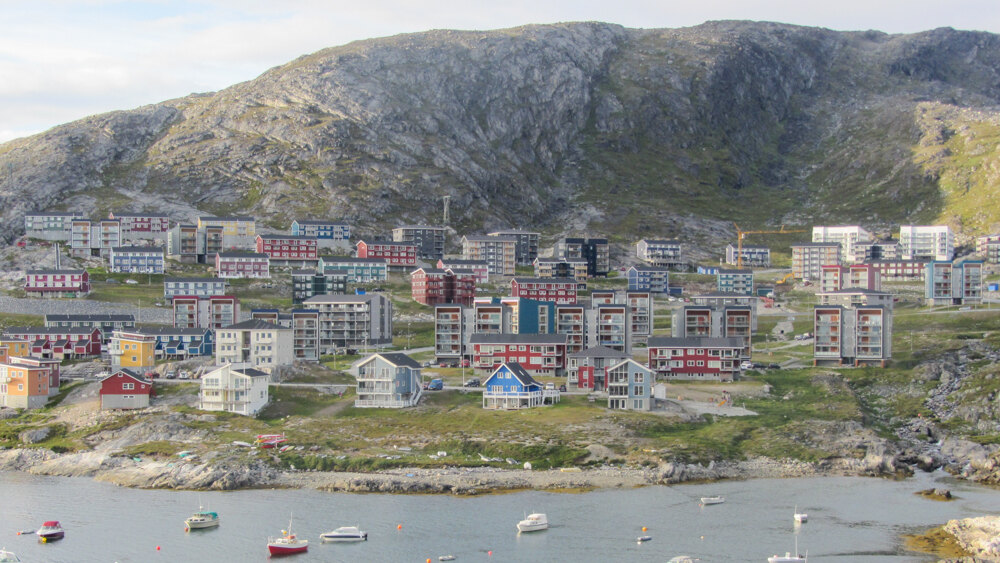 North of 60 Mining News
Very high-grade gold deposit in Greenland
Amaroq Minerals Ltd. Sept. 6 announced an updated mineral resource estimate that shows its flagship Nalunaq project in Southern Greenland hosts one of the highest-grade gold deposits on Earth. Nalunaq is home to a past-producing underground gold mine that produced roughly 350,000 ounces of gold between 2004 and 2009. Due to falling gold prices, fin...

Nathan Worden@nathanworden10/05/2022
This was great— I enjoyed the context of what is going on overall in Greenland, and then an actionable idea with the checklist at the end.
Is Amatoq’s mine near Nasraq? Is the issue with radioactive water one of the reasons why a mine wouldn’t be built at all?

Jennifer@jennymanydots10/06/2022
Author
@nathanworden Thank you, Nathan. It seems as though Greenland holds incredible potential. I highlighted Nasraq with a red circle below. As you can see, Amaroq has many projects in the surrounding area.
The actual name of the protest group of Narsaq's project was “Urani? Namiik,” Greenlandic for “Uranium? No.” Narsaq residents main concern was that a dam would not keep radioactive water from reaching their homes." 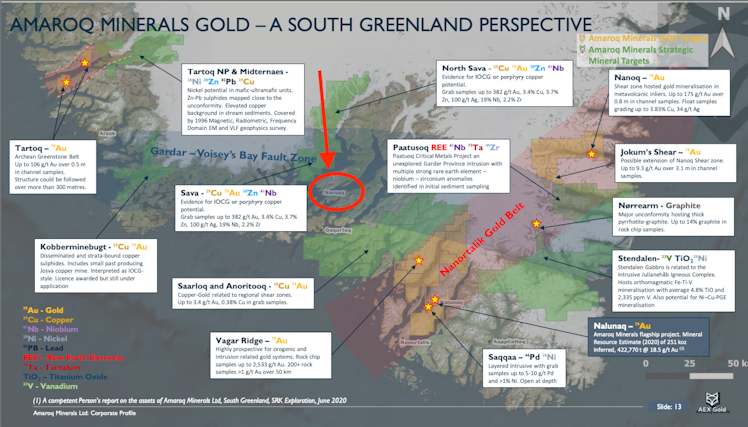 A former Danish government geologist, the chief executive of Bluejay Mining, claims it can be done the right way. He pointed to Bluejay’s plans to begin mining ilmenite, an ore that contains titanium, from a site hundreds of miles north of Narsaq. The ilmenite can be separated from the black sand that contains it using magnets rather than toxic chemicals, and the sand will be restored after mining is complete.
"On the opposite side of the fjord from Narsaq is a mining project whose main backer has not generated the same hostility as Greenland Minerals. Greg Barnes, a veteran prospector from Australia, has a license to mine the area, known as Tanbreez. The site has only trace amounts of radioactivity, Mr. Barnes said from Australia, but rich deposits of metals like tantalum, used in mobile phones, and zirconium, used in fuel cells and various kinds of electronics."
Greenland Minerals is looking for ways to address local concerns, for example by shipping the minerals somewhere else for processing rather than separating out uranium in Narsaq.
The radioactivity as a result of uranium mining appears to be the main concern here, whereas Amaroq is pursuing the following:
Gold
Copper
Niobium
Nickel
Lead
Rare Earth Elements
Tantalum
Titanium Oxide
Vanadium
The company is vowing to "make the environment an integral part of the management and decision-making process and incorporate environmental criteria into the design of projects, whether they be exploration activities, camp construction or access logistics or use of equipment by the Corporation or its contractors." 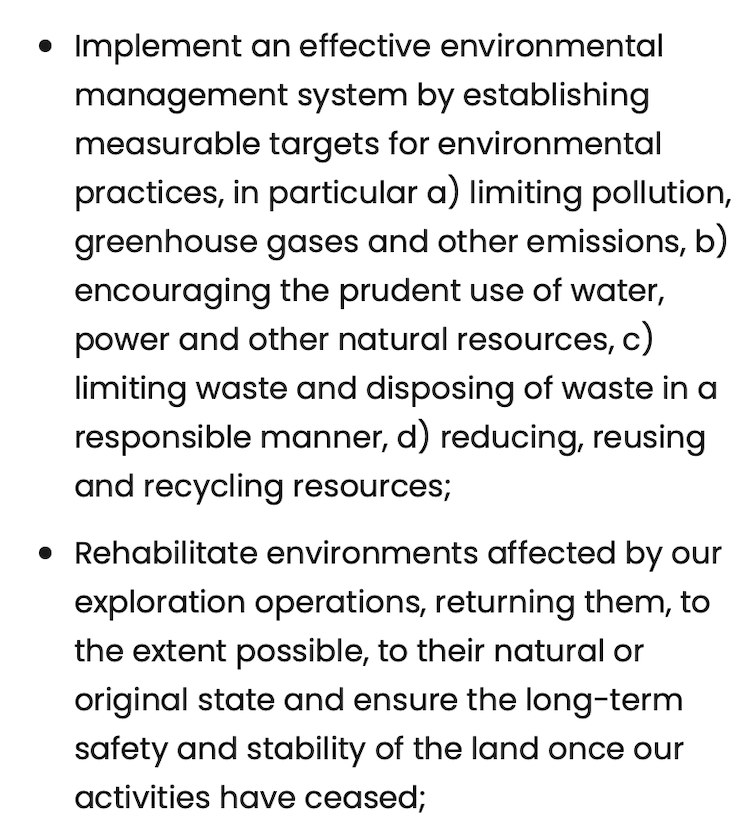 Hopefully the community can benefit from the jobs and infrastructure that a mine would bring without any harm done to the environment. It looks very promising to me!

Nathan Worden@nathanworden10/06/2022
@jennymanydots Thanks for the map and that extra commentary!