StockOpine@stockopine6d
$43.7m follower assets
lululemon Athletica Inc. - It’s all about branding
⚠ Our $LULU write-up is out!!! ⚠
This is the first write-up of 2023 so make sure that your sign-up to our newsletter to receive future posts in your inbox.
The below is an extract of our write-up on lululemon athletica (Ticker: $LULU ), one of the key players in the athleisure space. The extract covers Key Facts (1) and various subsections of Business Overview (2). Our full report covers among others, financials, industry analysis, valuation and more.
If you are interested to read more here is the link -> lululemon Athletica Inc. - It’s all about branding
-------------------------------------------------------------------------------------------------
1.KEY FACTS
Description: lululemon Athletica Inc. (“LULU”, “Lulu”, and “Company”) is engaged in the design, distribution, and retail of technical athletic apparel, footwear, and accessories, mainly sold through company-operated stores (“COS”) and direct to consumer (“DTC”) e-commerce. The Company, as of 30 October 2022, operates globally through 623 COS with the majority located in United States (337), China (105 – including Hong Kong and Taiwan), Canada (66), Australia (31) and UK (16).
Key Financials: Over the period FY12 to Q3’FY22, the Company depicted a revenue and operating income Compound Annual Growth Rate (“CAGR”) of 19% and 15.9%, respectively, reaching a Trailing Twelve Month (“TTM”) revenue of c. $7.5B and operating income of $1.6B (margin of 21.4%). LULU has Cash and Short-term investments of $353 million compared to lease liabilities amounting to $1,039 million. Cash position was abnormally low due to the investments in inventory in Q3’FY22 so as to meet demand.
Price & Market Cap (as of 20th January 2023): Its market cap is $39.9 billion with a 52-week high of $410.7 and a 52-week low of $251.51, whereas it currently trades at $312.80.
Valuation: LULU trades at a TTM EV/EBITDA of 21.7 (10 Year average of 22.4) and at a TTM P/E of 33.8 (10 Year average of 40.5).
*Note: Fiscal Year (“FY”) of Lulu ends on the Sunday closest to January 31 of the following year (i.e. FY21, year ended 30 Jan 2022).
2.BUSINESS OVEVIEW
Lululemon in a nutshell
Lulu was founded in 1988 in Vancouver, Canada and its initial public offering took place in July 2007. Since its inception it delivered a total return of 2,134.29% (per Koyfin) translating into a compound annual return of c. 22%.
Although it started as a company offering yoga pants to women, it expanded its offering providing technical athletic apparel, footwear and accessories to both men and women. The versality of its products/offering meets the needs of people who do yoga, run and train and those involved in other activities such as tennis, golf and hiking.
From a single store in Vancouver, Canada in 2000 to 623 company-operated stores across the globe with United States (337 stores) being its largest market as of today. Although, the number of stores expanded considerably brand awareness is still low and the potential for growth seems huge. More on this later.
If interested to read more about the history of LULU you can read the article written by our friend @investmenttalk Elastic Growth, Lululemon and more specifically section “The Brief History of Lululemon”.
Reporting segments
The Company has 3 reporting segments, namely, Company-operated stores, Direct to consumer and Other.
Company-Operated stores account for 46% of sales or $3.4B on a TTM basis (45% in FY21) and these are the sales generated through its 623 stores. The operating margin for COS (excludes general corporate expenses) since FY12 until today (excluding FY20) averages at 27%.
Direct to Consumer (e-commerce) account for 44% of sales or $3.3B on a TTM basis (44% in FY21) and these are the sales generated through ecommerce. LULU operating as an Omni-channel allows a guest to shop both in store and online. As per management, when a store-only guest shops online becomes an Omni-guest and spends approximately 30% more. The operating margin for DTC (excludes general corporate expenses) since FY12 until today averages at 42%. 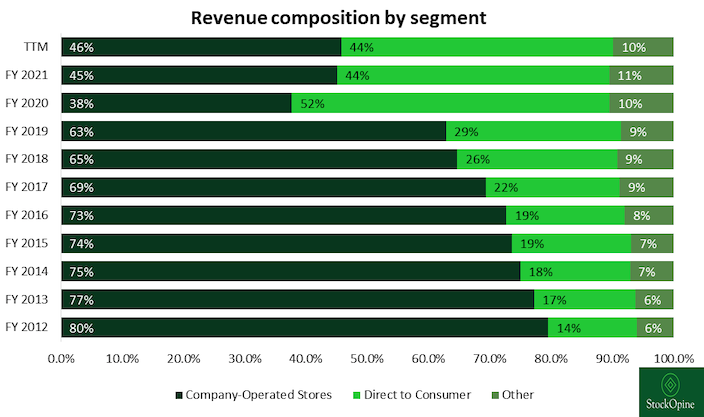 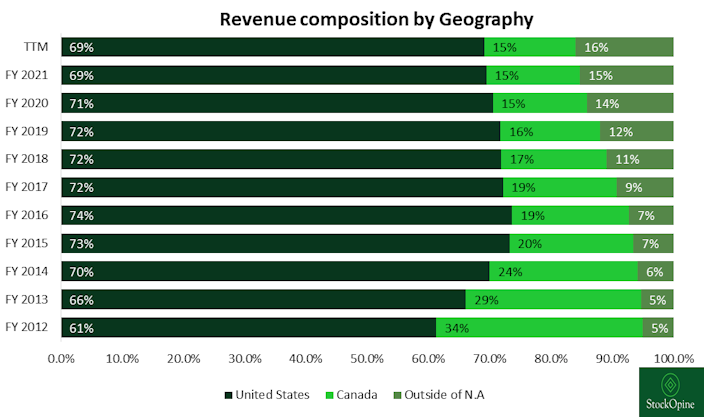 Source: Stratosphere.io, StockOpine analysis
In its Power of Three (April 2019) the Company targeted to quadruple its international sales from $360M to $1.4B. It is not there yet but it achieved 83% of this target on a TTM basis. If China zero COVID policy was not enforced this target could have been possibly achieved 100%. Per Power of Three x2 the target remains unchanged. Quadruple sales of $957 in FY21 to reach c. $3.8B by FY26 with China expected to be its 2nd largest market, while the number of stores in China is expected to triple.
Opening new stores, increasing sales per store, growing DTC channel, enhancing offering through product innovations and raising brand awareness are the growth drivers for LULU, both in North America and internationally.
The below pie chart represents the store composition as of 30 October 2022. As it can be observed, US and China (including Hong Kong, Taiwan and Macao) are the leading regions in terms of stores. From the “All other” category Germany with 10 stores and New Zealand with 8 are the most significant.

Source: Latest 10Q filing, StockOpine analysis
Even though, the number of stores drives revenue growth it does not necessarily mean that each store reaches its full potential from Day 1. For example, Canada has much lower number of stores, yet similar revenues to the rest of the international locations. This disproportionate relationship is further justified by the graph below which shows that when a new region was introduced, revenue per store declined. E.g. in FY14 it entered the UK market, in FY15 the China market, in FY16 the South Korean market while at the same time stores in US (and China after FY15) were growing exponentially. 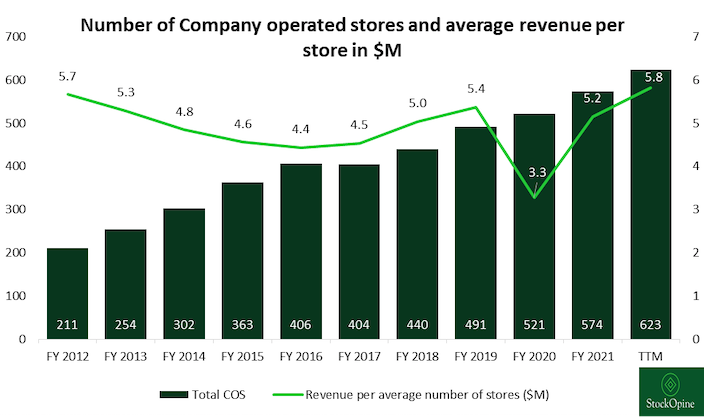 Source: Stratosphere.io, StockOpine analysis
Going forward, the Company expects to grow stores at double digit rates.
Power of Three x2
Power of Three x2 is the revised strategy / aspiration of Lulu for the next 5 years (released in April 2022) and has 3 key Pillars; a) Double Men’s Product, b) Double DTC and c) Quadruple International by 2026 while at the same time continue to grow Women’s products and North America at double digit rates. On successful implementation and execution of this plan, management expects to generate a revenue CAGR of 15% reaching total sales of c. $12.5B compared to $6.3B in 2021.
We trust that management will execute on the key pillars, if not exceed them. Why? Well, execution to date and the untapped market is what makes us believe that this is achievable. In the last 5 years Lulu missed analysts’ revenue estimates only on two occasions while it missed EBIT estimates just once! Additionally, when the initial Power of Three plan was unveiled in April 2019, the Company set among others the exact same targets, a) Double Men’s Product, b) Double DTC and c) Quadruple International sales by FY23. The result? Smashed Men’s and DTC targets in FY21 and FY20, respectively whereas on a TTM basis the international sales target is 83% achieved. Early achievement of those goals resulted to the revised plan in April 2022.
“We remain early in our growth journey, with our strong product engine, proven ability to create enduring guest relationships, and significant runway in core, existing, and new markets. Following our compelling track record of delivering against our goals, I am excited about taking our growth strategies to the next level to serve more and more guests around the world.” Calvin McDonald, CEO
The remaining financial goals include EPS growth exceeding sales growth, modest annual operating margin expansion, growth of annual square footage in the low double digits (5%), tax rate of 30%, unit inventory growth in line with sales and 7%-9% Capital expenditures. 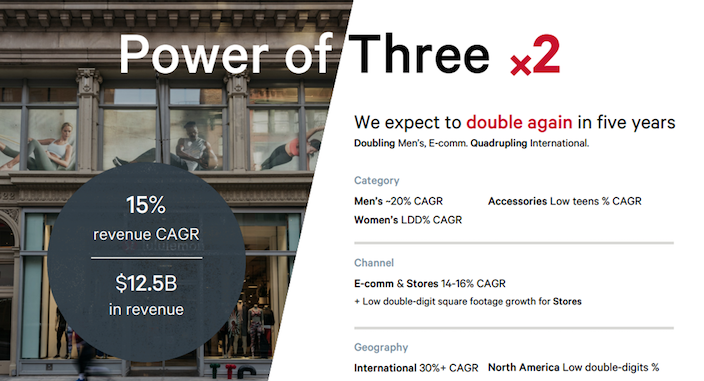 Conor Mac@investmenttalk6d
Reading this right now with an espresso :)

StockOpine@stockopine6d
Author
@investmenttalk what a combo! hope you enjoyed it more than the espresso 😉

Conor Mac@investmenttalk6d
@stockopine Its a magical pairing, helps me stay sharp haha. This was a great write up guys, and I will be sharing it in the next Market Talk edition.

StockOpine@stockopine6d
Author
@investmenttalk hehe. Thank you very much Conor! Glad that you liked it.

Reasonable Yield@reasonableyield6d
Outstanding stuff Opine. Wish I could write with such a flow

StockOpine@stockopine6d
Author
@reasonableyield really appreciate that feedback sir 🙏 thank you so much.

Uday@uplusk5d
Not a fan of their products at all so looking forward to know more about what still makes it a good business. Nice work!

StockOpine@stockopine5d
Author
@uplusk Thank you Uday. How come you don't like their product? Any specific reason? Most people here at Commonstock seem to be generally excited with their products.

Uday@uplusk5d
@stockopine If I compare them with existing brands I like (Nike, Adidas, Under Armour etc.) their pricing is strangely higher without any meaningful difference in quality. Mediocre designs and styles (I understand that it is athleisure, not a fashion brand but still puts me off) which takes me back to the price and think why is it so damn high. Very personal opinions of course.

StockOpine@stockopine5d
Author
@uplusk appreciate the honest feedback Uday. It’s always good to see both sides of the coin. What most people comment about is the comfiness of Lulu’s clothing.

Uday@uplusk5d
@stockopine Thanks! And as I said, very personal opinion and could be subjective, but hope I can change my mind. Maybe I'll have to own the stock for that haha

StockOpine@stockopine4d
Author
@uplusk haha. Definitely not. Wait for the product to convince you and then buy it :)
Not an advice ⚠️