Sidni Standard@sidnistandard6d
$27.9m follower assets
Instagram will be supporting NFTS worldwide
"Meta CEO Mark Zuckerberg announced today that the company is beginning its international expansion of NFT support on Instagram. The expansion follows the social network’s initial NFT test launch in May. With this expansion, users and businesses in more than 100 countries in Africa, Asia-Pacific, the Middle East and the Americas will now be able to share their NFTs on Instagram. Prior to the expansion, the support was only available to select creators in the United States."
This is GREAT news and hopefully $META can turn their boat in the right direction since they've been losing public support since trying to basically re-create TikTok on IG. Immediately this makes me think of the company Showtime, and how they might want to absorb it/acquire it if they're considering going full NFT showcasing on IG. In addition to rolling out NFTs internationally, "The company also announced today that Coinbase Wallet and Dapper Wallet are now accepted as a third-party wallet compatible for use. Instagram is also expanding its supported blockchains to include Flow."
Overall, this looks like a step in the right direction and is good news for investors who are betting on the longevity of the company. Hopefully, they get their management together that way a coherent vision for the future can manifest.
https://tcrn.ch/3bCkCx0 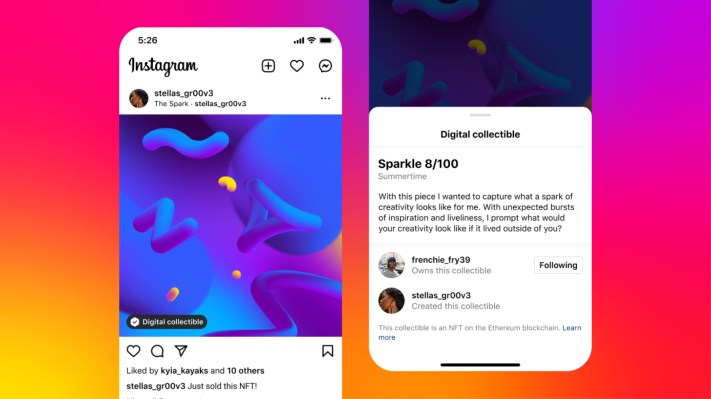 Meta is expanding NFT support on Instagram to 100 countries – TechCrunch
Users and businesses in more than 100 countries in Africa, Asia-Pacific, the Middle East and the Americas will now be able to share their NFTs on Instagram.
TechCrunch

Eric Messenger@wall_street_deebo6d
Just the fact that they have as much money as they do and he has done what he’s done as the head of that company, I believe he will be able to continue successful growth and evolution of Facebook, Meta now, and that is why. Social media launched it but he wants an empire. I’m comfortable with 25% of my portfolio in $META, especially at todays valuations. It’s one I continue adding to position all the time, as last mg as valuation remains attractive; it’s 1 of 3 core positions I’m building in my portfolio. Is and will be a top 3 holding in my portfolio.

Sidni Standard@sidnistandard6d
Author
@wall_street_deebo Zuck is clearly a bull so not a bad bet. If they can really capitalize on NFTs and give creators another revenue stream through IG then it’s safe to say their business will only continue to improve. With all of this news it’s has me thinking about buying some shares (and I’m not the biggest proponent of Zuck). I think sometimes ppl let their opinions about ppl get in the way of their own profits, and maybe that’s what’s been happening to me with $META. Definitely keeping a close eye to see where everything goes 👀

Eric Messenger@wall_street_deebo6d
@sidnistandard At these valuations I will be adding enthusiastically. They put up numbers in the last decade unlike anything I’ve seen elsewhere. Their growth slowed for the first time & investors sold the stock off, causing a 25% drop overnight; that’s when I initiated a position and I’ve been adding ever since. I am more convinced all the time that they should be one of my top 3-4 holdings.
Check these slopes out 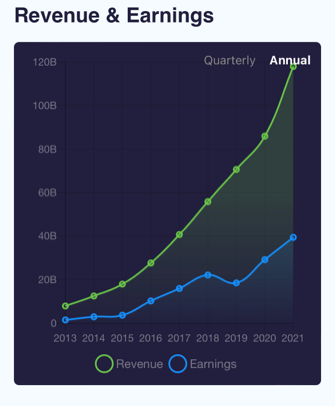 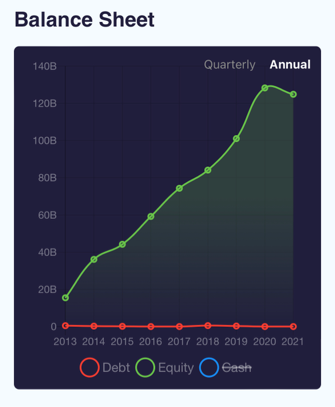 Eric Messenger@wall_street_deebo6d
@sidnistandard just that the graph goes up in $20B increments is crazy. Only Google & Microsoft come close to those revenue & equity numbers while producing such high earnings & maintaining such low (nonexistent) debt. Google’s goes up in $50B increments & Microsoft has more debt. So I got them ranked Google, Facebook, Microsoft. Even Apple & Amazon look bad in comparison. They’re 3/4 favorite businesses looking my-term.

Sidni Standard@sidnistandard6d
Author
@wall_street_deebo thanks for sharing this 🙏🏾. You’re rapidly becoming one of my fave ppl on here! I’m learning a ton 🤑

Rihard Jarc@rihardjarc6d
I mean I like news like this from $META but honestly right now they don't move the needle. Would want more news around Reels and the features, developments on their core apps and the products there.

Sidni Standard@sidnistandard6d
Author
@rihardjarc short-term definitely not. Switching the newsfeed to be chronological once more would move the needle tho... hopefully that's one of their next announcements