Conor Mac@investmenttalk11/18/2022
$344.3m follower assets
There Has Never Been a Better Time to Open an ISA for UK Residents
The UK Autumn Budget Seeks to Make Those With the Broadest Shoulders Carry the Economy via a Proposed £55 billion in Spending Cuts and Tax Hikes
As I sit at my desk this morning, which is situated behind a window that looks out onto Edinburgh’s cobbled streets, I can see the pattering of rain as it falls into puddles which were formed earlier in the day. I look up at the sky and it is grey. In fact, the entire city, as it usually does this time of year, has an unremarkable grey hue. The landscape that I view before me in the early hours of this Friday invokes a remarkably similar feeling to that which I get when thinking about the UK’s economy.
The issue of how to manage the UK Government’s gaping fiscal hole has been a hot topic this year. Although we can’t physically see this hole, it is rumoured to be as large as £50 to £70 billion. In September, the right honourable Liz Truss squelched her feet into the boots of her predecessor, Boris Johnson, and became the latest Prime Minister of the United Kingdom. She was tasked with tackling the worsening economic condition of the nation. Just 50 days, and one terrible budget, later, she was ousted and replaced with Rishi Sunak. In an environment where historically low UK unemployment held firm and inflation began to surpass double digits, Truss thought it was a grand idea to implement an expansionary policy. Her mini-budget, which proposed to cut taxes, increase investment incentives and pile on energy subsidies was designed to increase economic growth and help the UK dig itself out of its economic melancholy. It’s safe to say that it didn’t go down well. The pound plundered, yields for domestic government bonds ripped, and the Bank of England had to step in and announce it would buy Gilts to calm the crisis that was unfolding in reaction to her mini-budget. All things considered, Truss’ package was not terrible, it was just proposed at the wrong time.

Charts are from Joseph Politano’s Apricitas Economics
I won’t be diving much further into that fiasco, but for intrigued readers, I suggest reading Gilt Trip; an article published by the brilliant Joseph Politano who writes Apricitas Economics which documents that moment in time well. When the time came for Sunak and his new Chancellor of the Exchequer, Jeremy Hunt, to step in, the world stood by to see what course of action the pair would take. Many had expected measures of austerity, and that’s exactly what we got. Echoing the earlier sentiments of Jerome Powell, Chair of the Federal Reserve, who remarked that US Fiscal policy would “bring some pain to households and businesses” wishing there was a “painless way to do that” but that “we have got to get inflation behind us”, when defending his new Autumn budget Hunt would claim that "sound money matters more than low taxes" and that “we know we are doing the right thing for the long term". He continued to say that the Government is "not pretending that this isn’t going to be a difficult time for everyone" as the cost of living rises and household disposable income dwindles.
So, what exactly is going he talking about?
In the space of two months, the government (under Truss) have proposed tax cuts of £30 billion to proposing (under Sunak) ~£55 billion (1) in spending cuts and tax hikes. Under the same party! 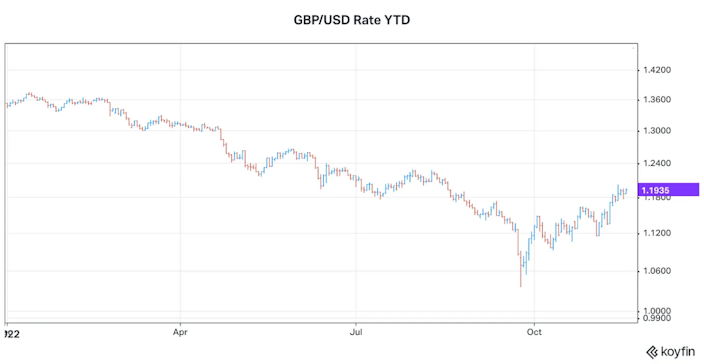 Here are some of the highlights of the Autumn Budget

Following up on this announcement, Hunt argued that he "tried to be fair" in his decisions by requesting that those "with more to contribute more". In other words, those with the broadest shoulders are expected to carry the economy forward. The reality of the situation is that more than ~15% of the population will now be paying the higher income tax brackets. In the 2022/23 tax year, more than 6 million people paid the higher rate band of 40% (2) on income over £50,270 (up from 4.3 million in 2019) while ~630,000 people paid the 45% rate on income over £150,000. With these new measures, a further 232,000 are expected to move into the 45% tax threshold. Some will say that's grand, others, presumably those within the new brackets, will say it's not.
More Pain Ahead, Says OBR
As far as the outlook for the UK economy goes, the Office for Budget Responsibility (OBR) is not getting its hopes up. The body, which believes the UK is already in a recession, forecasts (3) that GDP will fall by ~2% from peak to trough following the third quarter of 2022, and that unemployment rates will rise to, and peak at, 4.9% by the third quarter of 2024. They believe that it will take the UK a further 2 years before output recovers past 2019 levels. 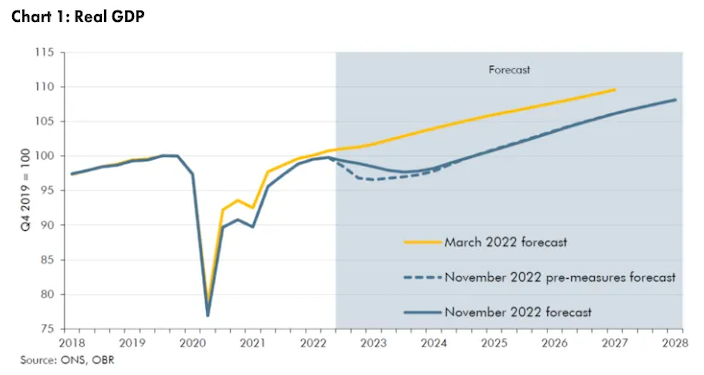 Chart is from the OBR Economic & Fiscal Outlook Paper (see footnotes)
While the OBR feels that “CPI inflation is set to peak at a 40-year high of 11 percent in the current quarter” they expect it lingers, remaining at an average of 7% over the next year before being “dragged below zero in the middle of the decade by falling energy and food prices before returning to its 2 per cent target in 2027”. But disinflation alone is not going to shield the average household.

Chart is from the OBR Economic & Fiscal Outlook Paper (see footnotes)
The OBR believes that real disposable income is set to decline at its fastest pace in more than 70 years, and is not set to recover until later in the decade. The leading factors are inflation, higher interest rates, nominal wage growth falling behind, and the impact of net taxes and benefits, which after boosting real disposable incomes in 2023 will be dilutive when temporary support erodes by 2025. All in all, a picture that is as bleak as the view from my window’s view this morning.
Moving on to ISAs
I have some opinions on the Autumn budget like many others but I live by the motto that politics is not a discussion for the dinner table. Instead, I wanted to hone in on just two of the implications from the Autumn statement; dividend and capital gains taxes. I am passionate about investing and feel fortunate to be able to interact with investors every day. It stimulates my mind and feeds my insatiable curiosity. But this isn’t a trait that many Brits have. Compared to our American cousins, we tend to be more risk-averse. In fact, the ONS (4) reports that less than 13% of the UK population invest outside of their pensions compared to 50%+ in the United States; levels the UK have not seen since the 1960s. Something else that I am deeply passionate about is interacting with those Brits who are overwhelmed, or uneducated, about the benefits of long-term compounding. Long-term readers will know of this passion if they read my commentary (5) on UK investing appetites and their abysmal usage of ISAs back in February of this year. Back then, I reported that:
“Of the 13 million Adult ISA accounts (excludes SIPP) subscribed to in 2020, a staggering 75% of them were subscribed to in Cash. Essentially, Brits favour holding their cash in low-interest-bearing accounts over-investing in public markets. Despite the average account value of S&S ISAs growing from £3,300 to £9,300 over the last decade, the total number of active accounts has fallen from 3 million to 2.4 million. Meaning that fewer than 5% of the UK population have an actively funded S&S ISA.”
A stocks & shares ISA is a gift bestowed upon UK investors that allows them to invest up to £20,000 per year in a wrapper that is exempt from capital gains and income taxes. Until this year, most new investors, with smaller pools of capital to invest, failed to see the benefit of opening an ISA. After all, each year this investor could produce up to £12,300 in capital gains, and be required to pay no tax. Further, the £2,000 dividend allowance was unlikely to affect investors with an average account balance of below £10,000. Just like the child who eats the marshmallow instead of waiting 30 minutes and getting 3 marshmallows, most Brits don’t look past the near term and consider that as this capital compounds over the decades, these tax-efficient wrappers will save them a pretty penny as they mature. But with the proposals to slash thresholds for capital gains tax from £12,300 to £3,000 and dividends tax from £2,000 to £500 over the next two years, the argument to open an ISA, and fund it before any other account, has never been stronger. By the 2024/25 tax year, investors on the basic taxpayer rate who earn £2,000 in dividends and £12,300 in capital gains will be expected to pay ~£1,060 in additional taxes if they use a general investment account, compared to the £0 they would pay if they used an ISA. 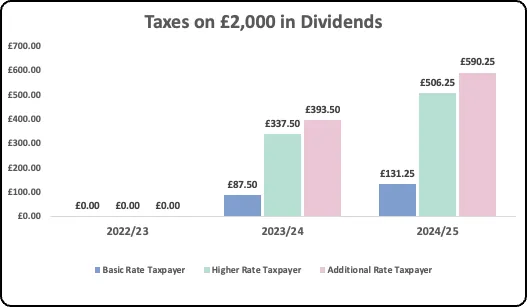 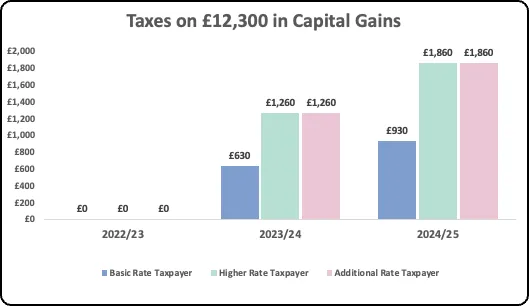 Charts created by Investment Talk
While the nominal amount of taxes may seem insignificant to some, the mere act of having to file self-assessment tax returns and pay additional taxes is the point I am trying to hit home. Particularly given that it can all be avoided by using an ISA. If newer investors are looking for suitable ISAs, I would direct you to Vanguard or Freetrade. Vanguard’s ISA is limited, in that it only provides access to Vanguard ETFs and is exclusively a web portal. But it is my opinion that this is actually the healthy way to invest over the long term for the majority of investors that don’t have the time to study companies and keep up with the market or quarterly earnings calls. I mean, just look at the annualised performance of the average individual investor over the last two decades compared to simply buying the S&P 500 and getting on with your life. 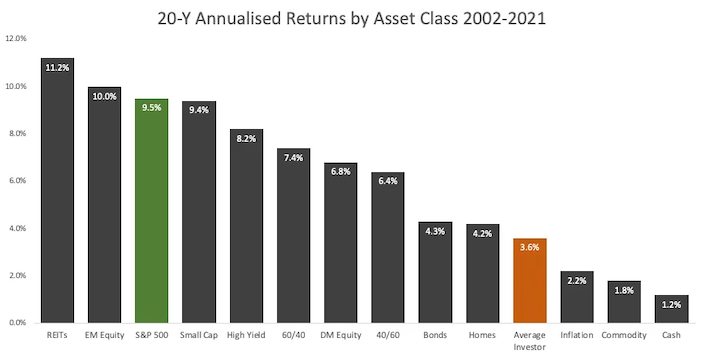 Chart created by Investment Talk using JPM Data
Alternatively, for those who want to pick their own stocks (or buy ETFs) in a more UX/UI friendly way that has a mobile app and zero commissions for trades, I couldn’t rate Freetrade more highly. Those wishing to dive deeper into the benefits of ISAs or learn more about Freetrade can see footnote 5 at the bottom of this article. The point of this article is not to promote any particular brokerage. Instead, the case I am making is that so few Brits reap the benefits of an ISA and the trajectory of the UK’s tax policy on newer investors is set to make the argument for utilising an ISA considerably stronger in the coming years (if it wasn’t already obvious). If just one reader reaches out to me in the coming weeks and tells me they have researched the ISA for themselves and opened one, then I will be content.
Thanks for reading,
Conor

investmenttalk.substack.com
Can Companies Like Freetrade Bring Enthusiasm Back to UK Investing?
A Quick Dive Into the UK's Most Promising Investment Platform

Uday@uplusk11/18/2022
Good read Conor. Many countries have similar stats when its comes to having one's net worth in the stock markets. Europe is far far behind too, as I found out in a report a while ago: https://theatomicinvestor.com/2021/03/10/the-robinhoods-of-europe/
The U.S has been at the forefront of innovating and developing this ecosystem of not just helping the average citizen access the markets, but also educating them about the benefits of it. One of the pieces that keeps driving the feedback loop that drives their markets higher decade after decade.

Todor Kostov@kostofff11/18/2022
@investmenttalk Check this out, I think that's where we are heading to. 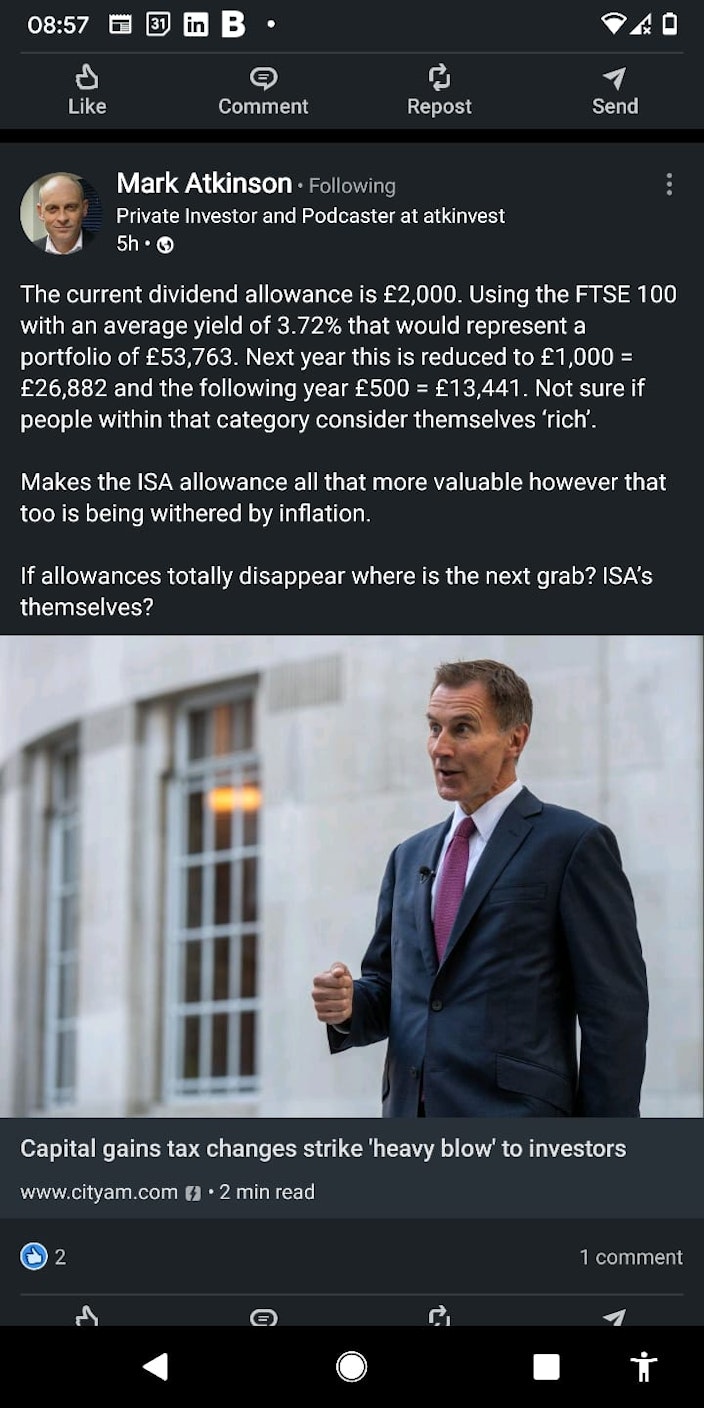 Conor Mac@investmenttalk11/18/2022
Author
@kostofff Very good way of framing it. Tbh this woulda been perfect for the article, great visualisation.

Todor Kostov@kostofff11/18/2022
@investmenttalk Should have let me know earlier that you are publishing on that topic ;)