Jennifer@jennymanydots06/13/2022
$26.1m follower assets
Why Vanadium - Part Two
I skate to where the puck is going to be, not to where it has been. - Wayne Gretzky
In May 2017, mining magnate Robert Friedland stated “We think there’s a revolution coming in vanadium redox flow batteries. You’ll have to get into the mining business and produce ultra-pure vanadium electrolyte for those batteries on a massive scale. The beauty of VFRBs is that you can charge and discharge at the same time, something that can’t be done with a lithium battery. With a VRFB, you can put solar power and wind power into the same battery, and you can put excess grid power into the battery at night, and at the same time you can have a stable output into the grid.” 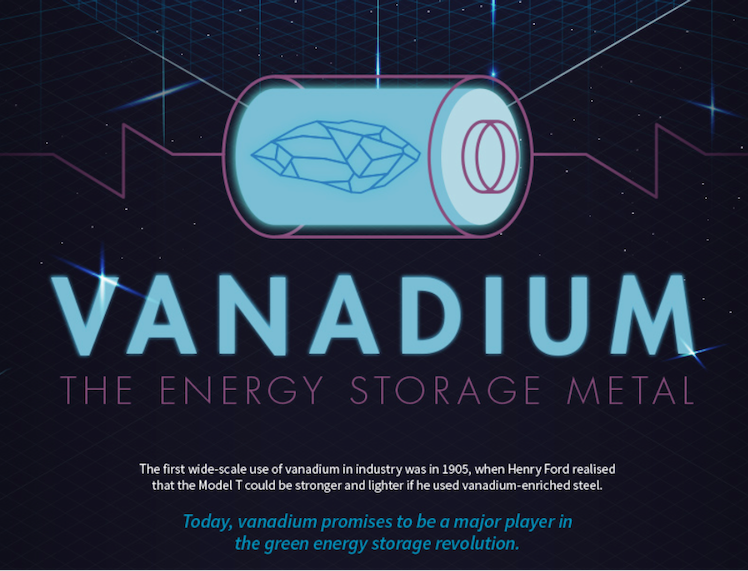 Vanadium “is a metal that is currently off the radar for most mining investors, but that can change quickly. History shows that vanadium is characterized by surges in speculative interest once or twice per decade going back to the 1980’s." -MJG Capital, July 2021
Vanadium is the 20th most abundant element in the earth’s crust; metallic vanadium is rare in nature but vanadium compounds occur naturally in about 65 different minerals. Vanadium is mined mostly in South Africa, north-western China, and eastern Russia. In 2013, these three countries mined more than 97% of the 79,000 tonnes of produced vanadium. Mainly used to produce specialty steel alloys as well as some aluminum alloys, the compound vanadium pentoxide is used as a catalyst for the production of sulfuric acid. The vanadium redox flow battery (VRFB) for energy storage may be an important application in the future. 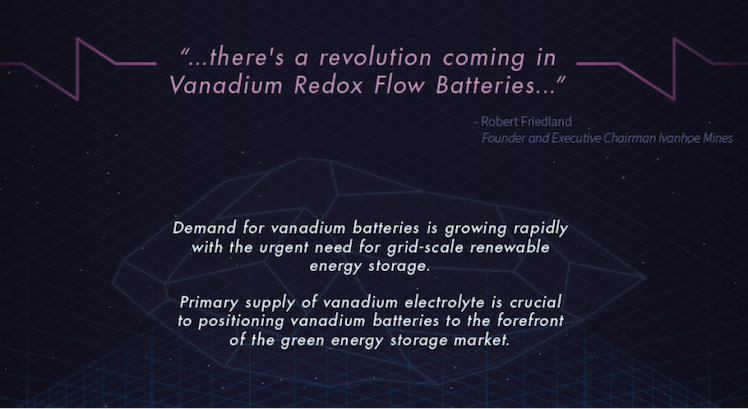 VRFB’s are a proven and rapidly growing commercial-scale technology that can store energy from renewable sources and provide on-demand, round-the-clock, carbon-free power. According to an independent analysis by market intelligence and advisory firm, Guidehouse Insights, global annual deployments of VFRBs are expected to reach approximately 32.8 GWh per annum by 2031. This represents a compound annual growth rate of 41% over the forecasted period. Europe’s metals association, Eurometaux, identifies VRFBs as one of the alternative technologies of growing importance that might reach penetration rates of 20% of the market.
These findings point towards significant vanadium demand increases equivalent to +110% of current demand. - Mining Review 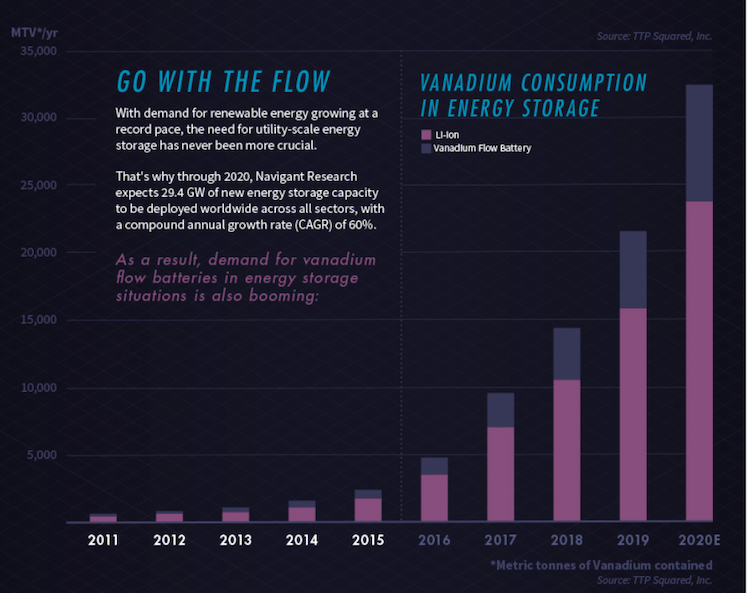 A critical metal is defined as one whose lack of availability during a national emergency would affect the economic and defensive capabilities of that country. The United States and Canada are completely dependent on recycling and imports for 100% of their vanadium supply. With vanadium demand set to soar, it is a valid question as to where new vanadium supply will come from. There are currently no North American reserves, a situation that is and should be deeply alarming to politicians on both sides of the 49th parallel.
Because vanadium is a metal that seems destined for a supply crunch, because of its applications for traditional industries like autos, aerospace, defense and steelmaking, and due to its potential for long-term battery storage of grid-scale electricity, companies that are developing vanadium deposits in North America need to be on your radar screen.
https://www.mining.com/web/vanadium-metal-cant-without-dont-produce/ 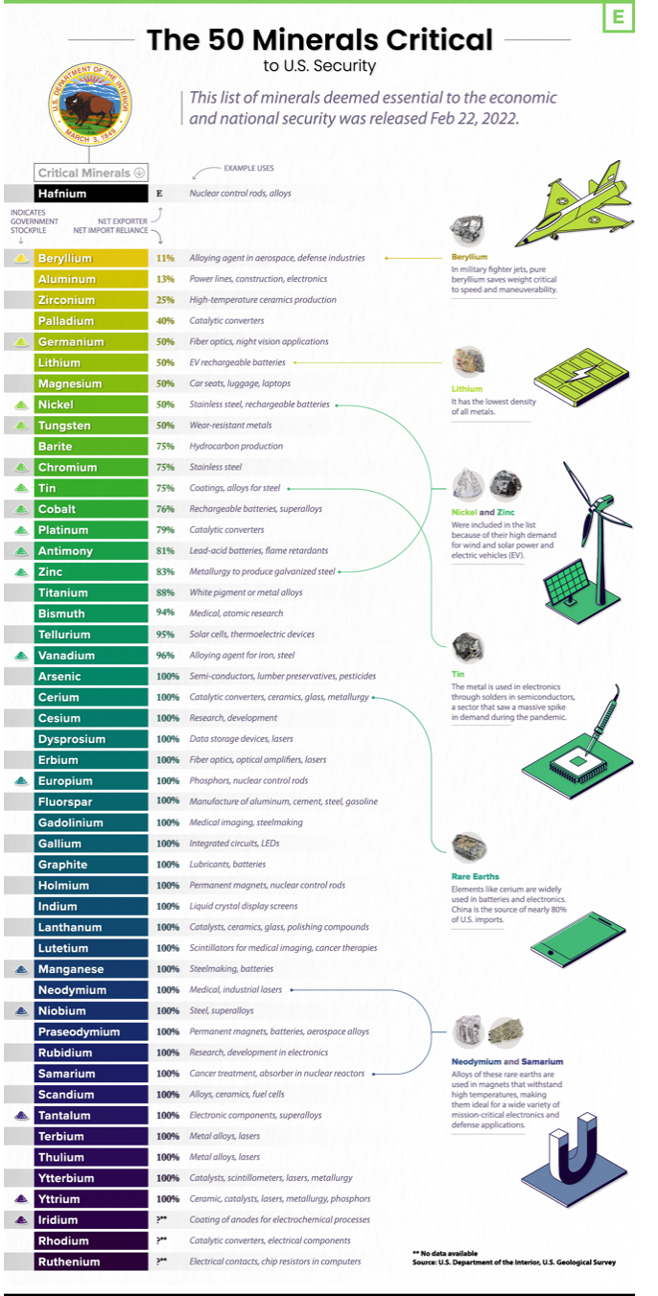 Above the touted superiorities, using VRFBs for large-scale stationary energy storage would relieve some of the stress off lithium-ion battery supply chains that are already being scaled up at an enormous rate to keep pace with EV manufacturing.

In a May, 2022 article, S&P Global Commodity Insights claimed “One mineral that’s been overlooked in this entire cycle is vanadium, which has huge market opportunities. It’s increasingly difficult to see lithium-ion as a sustainable energy storage solution moving forward. The battery makes sense but we have to think of the balance sheet. Vanadium is more efficient than lithium-ion in the grid storage market.” Prices for ferro-vanadium have risen fast, in April averaging just over double its average of last year. Vanadium producers typically lease the vanadium in batteries for use in the grid to energy companies.
https://www.spglobal.com/commodityinsights/en/market-insights/latest-news/metals/050522-overlooked-vanadium-may-gain-energy-storage-market-from-pricey-lithium-ion-mines-money
Companies to watch:
Strategic Resources
Earlier in 2021, VanadiumCorp entered into an agreement to test its patented and proprietary green recovery process on titanomagnetite concentrates from Strategic Resource Inc.’s Mustavaara project in Finland. Mustavaara hosts a historic mine that provided roughly 10% of the world’s supply of vanadium over nearly a decade, ending in 1986. Strategic, which is working toward re-establishing vanadium production at this past-producing mine, believes the VanadiumCorp process could be a more environmentally sound means of extracting all the value Mustavaara has to offer.
MJG Capital’s Matt Geiger did an excellent write up on Strategic Resources in July, 2021 (link below). If you are interested in investing in the vanadium sector, it’s an excellent place to start and then view the $SR.V corporate presentation on their website.
https://mjgcapital.com/wp-content/uploads/2021/07/July-2021.pdf
Robert Friedland’s IPO coming soon – Ivanhoe Electric & VRB Energy
VRB Energy is majority-owned by Ivanhoe Electric, a metals-focused exploration company that also invests in metals and minerals-based technologies to sustainably support an urbanizing planet and the global transition to renewable energy.
'Our company has developed the most reliable, longest-lasting vanadium flow battery in the world, with more than 30 megawatt-hours installed and in construction worldwide, and over 800,000 hours of demonstrated performance.'
In a recent SEC filing for Ivanhoe Electric’s IPO, the section covering VRB mentions the “requirement for significant amounts of vanadium containing waste to produce sufficient vanadium pentoxide for commodity sales and vanadium electrolyte for energy storage…We may be unable to identify, source and acquire such feedstock on terms that are acceptable.”
In March 2021, VRB Energy announced an agreement for China’s largest solar battery, a 100MW solar and storage project in Hubei Province. Robert Friedland stated the project was “a massive catalyst for VRB Energy’s growth” and further demonstrates that they are “developing absolute best technologies to support the worldwide green energy revolution.”
Of note, VRB produces VRB-ESS using vanadium recycled from petroleum waste. Syncrude is one of the largest operations in Canada’s oil sands industry and produces approximately 50,000 tonnes per day of waste product, which includes significant quantities of vanadium. Unlocking the economics of metal extraction in this area could prove to be not only lucrative for the Canadian oil sands, but could also solve issues with waste disposal.

Voyager Metals Inc.
Voyager Metals Inc. continues to grow the Iron and Vanadium resource at Mont Sorcier by exploring the extension of the deposit’s magnetic signature in addition to converting Indicated and Inferred resource to Measured tonnage. $VONE.V 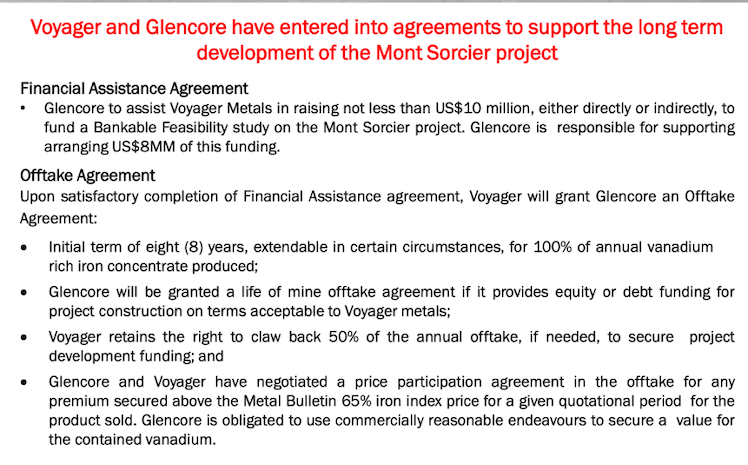 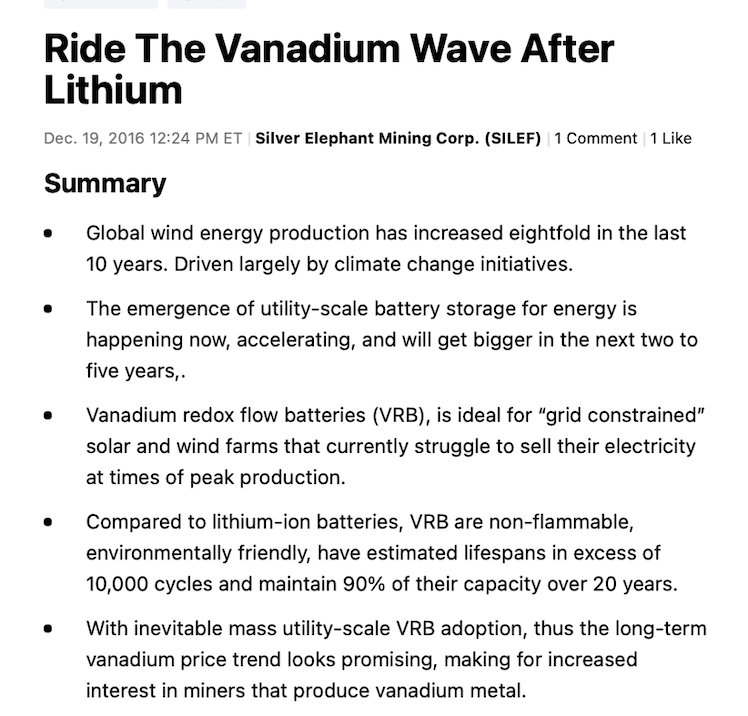 Companies of interest I am currently looking into:
Critical Minerals Group
https://www.criticalmineralsgroup.com.au/investor-presentations
Largo
https://www.largoinc.com/overview/default.aspx
As always please DYODD and don't hesitate to ask any questions you may have. Vanadium is a relatively new commodity to me, but the more I read about it, the more bullish I become.
www.largoinc.com
Largo Inc. - Overview
No comments yetBe the first to add your insight!