Samuel Meciar@sammeciarJuly 17
$23.7m follower assets
'Buy the Dip' Competition - My pick is $ABNB
My buy the dip idea is $ABNB, and as much as I love pretty much every company in my portfolio, I felt the urge to pitch Airbnb because I strongly believe it remains misunderstood and thrown into this "Travel & Leisure" bucket by growth investors despite amazing management and numbers rivaling even SaaS companies (on FCF margin basis).

I believe Airbnb has built itself a market of its own. There were multiple companies during their lifetime that tried to copy their model, but ended up failing because they were too greedy and tried to simply take away what Airbnb had instead of focusing on systematic execution.
While today I believe they dominate their market, I think there's more optionality to go after and reasons for me to believe they are serious about those business avenues, talking about Experiences, and during pandemic introduced Online Experiences, popular to this day, but we'll get to those parts of the business later.
A large part of my thesis is actually the management and Brian Chesky. I believe he's one of the most brilliant entrepreneurs and I respect him tremendously. The Airbnb story is just beautiful - imagine you found a company in 2007 right before a GFC hit RE market hard with many people becoming unemployed + your idea is something that wasn't really done at scale before, it's by a large part based on TRUST in the people! The idea came from urge to pay their rent by offering air mattresses to people who were attending nearby conferences in San Francisco, and as time went on it turned into its own market with Airbnb dominating the space and becoming a part of the pop culture and a verb commonly used among young demographics. I advice you to go and listen to this interview with Brian Chesky and maybe a few more and you'll understand why I love the guy: https://www.youtube.com/watch?v=o3wo8Y1QVZk

Airbnb's mission statement is "To help anyone belong anywhere." - I absolutely love this and it should be apparent by now that the company and management is mission-driven!
Airbnb as a whole is an online marketplace for stays and experiences, connecting everyday people and offering them the reach and inventory of other peoples stays & services and buyers for those same stays & services.
Stays can be split into short-term and long-term stays. Given that the company makes money off of fees, long-term stays of multiple weeks or even a month are obviously the more lucrative side of the business, and great for Airbnb - growing really fast. In total, Airbnb has roughly a 15% take rate on that side of the business, much higher than competing platforms like Vrbo with 8%, demonstrating their insane value to all sides and pricing power.
Additionally, in case something goes wrong, Airbnb offers Aircover free of charge for travelers: 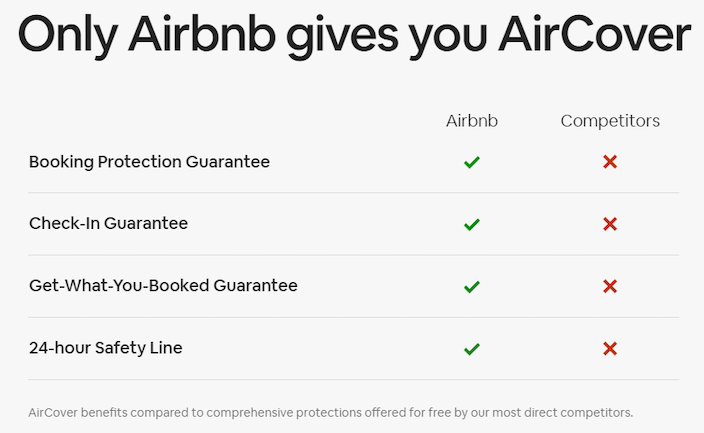 And on the other side, AirCover for Hosts, also free of charge: 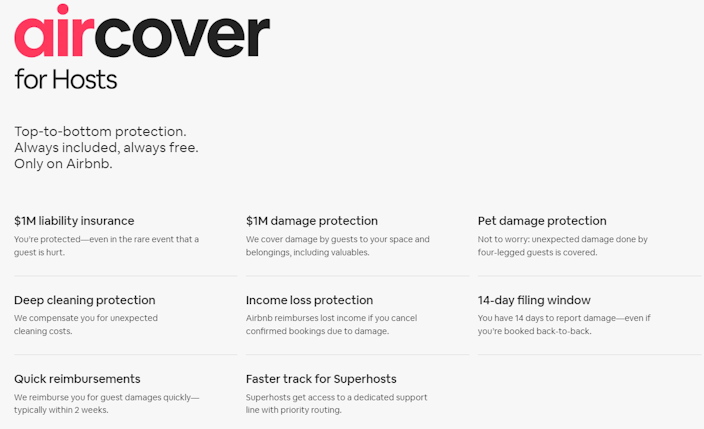 In 2016 Airbnb launched Experiences allowing locals to host all sorts of interesting activities for tourists coming from abroad, ranging from walking tours through places to Salsa classes, Wine degustation and a lot more.
As Airbnb found itself in a tough situation during the pandemic where they lost most of their business in a few weeks but had to take care of both guests and hosts financially as many people depend on that income, and Airbnb depends on the culture and trust of people in the platform's ability to provide great services with trusted hosts, in 2020 Airbnb introduced Online Experiences, allowing guests and hosts to connect through Zoom and show off all sorts of activities and talents, ranging from meditation classes to cooking, magic, counseling, classes on painting, astrology and much much more.
This in my view is very underappreciated part of the business with large potential as it costs virtually nothing for Airbnb to run it and Airbnb has an insane 20% take rate on that side of the business.
Therefore, as you can see, they are able to continue introducing new products, providing high value and exercising their almightiness.

Many of you may have heard that the main risk for Airbnb is probably a regulatory scrutiny from local administrations in regards to problems with housing. However, Airbnb has shown us they were able to navigate these waters pretty well, and I believe that they actually gained a pretty nice upper hand during and after the pandemic thanks to their position in the market and again, technology they developed - that is because as travel virtually diminished during lockdowns, local administrations turned to Airbnb to bring tourists to the areas that were by a large part dependent on the travel sector, ending up working on campaigns and just overall collaborating which for many resulted in great traffic and fulfilled the goal.
An example of such a partnership: 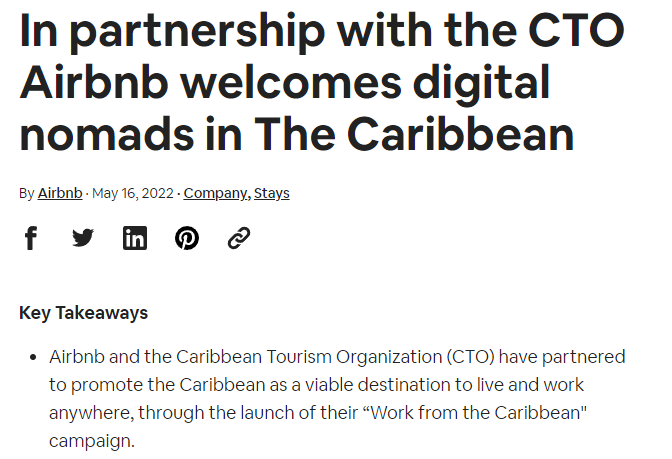 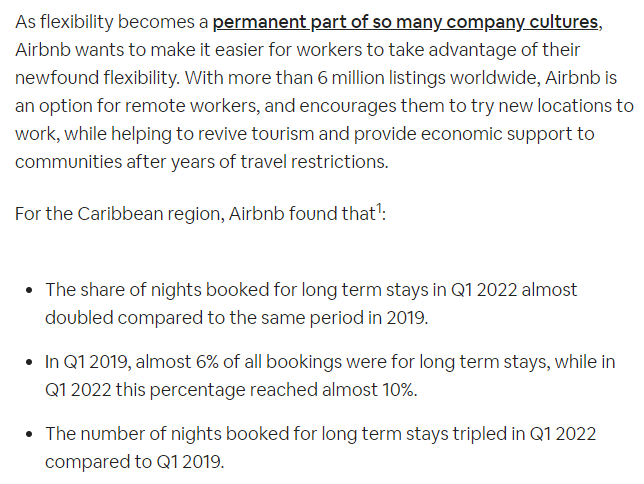 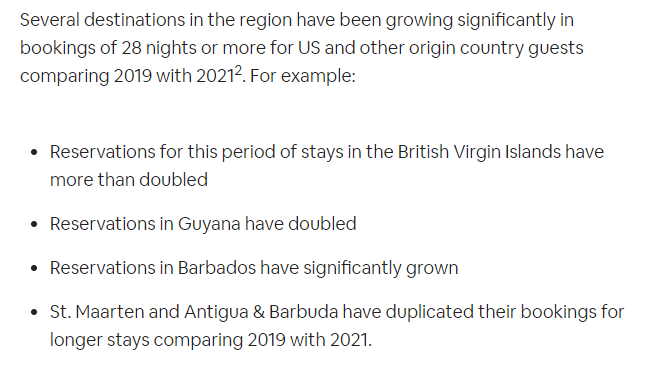 In 2021, in one of their updates, they introduced an "I'm flexible" search, which since then was used more than 2 BILLION TIMES, an absolutely mind-blowing figure. The feature is basically solving the main issue of travel congestions, given that they have an enormous amounts of data since so many people travel through Airbnb's, they can then distribute the travel traffic more evenly, mitigating too much travel in one destination and in theory spreading out tourists across destinations which over the long run I believe will result in even better relationships with administrations.

While other travel companies like $BKNG and $EXPE are still lower than the highs from FY2019, Airbnb is killing it and is already way above those figures. 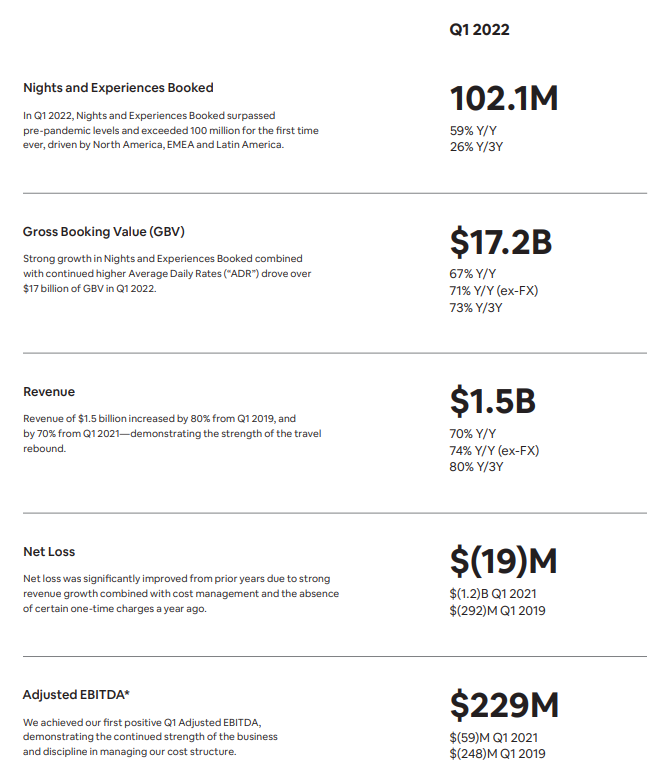 As we can see, last quarter they reported 26% growth in Nights and Experiences Booked vs Q1 2019 but GBV grew 73% vs Q1 2019, demonstrating that the value of average order grew tremendously faster than the actual nominal amount of bookings. Revenue grew 80%, again demonstrating their average take rate went up vs GBV. While the company isn't yet optimized for Net Income profitability, it's printing large sums of FCF (even when deducting SBC) especially as they managed to optimize for better margins during Covid lockdowns, showing the strength of the management and that they actually took an advantage and managed to come out of the pandemic better than they were before in terms of financial health. 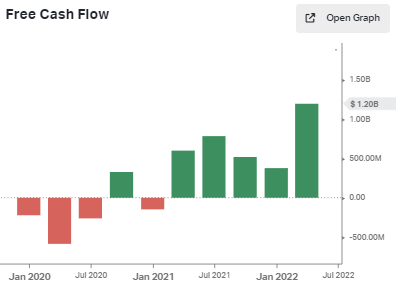 The company IMO has the best balance sheet vs their "peers" with about 9,3B in cash & ST investments vs total debt of 2,4B and will almost certainly continue to rapidly increase the amount of FCF moving on, bringing the cash balance even higher.
The management enjoys great reviews on Glassdoor (again best of their peers)

And has large skin in the game with roughly 33% ownership

While I don't pay too much attention to valuation as my main focus is buying more and more of best in class equity and increasing the nominal amount of shares over time by DCAing, it's worth mentioning that in my view, Airbnb trades at a lucrative valuation relative to their health of financials and growth - at 22x TTM P/FCF and 6,5x price-to-cash and is valued the cheapest it has ever been. 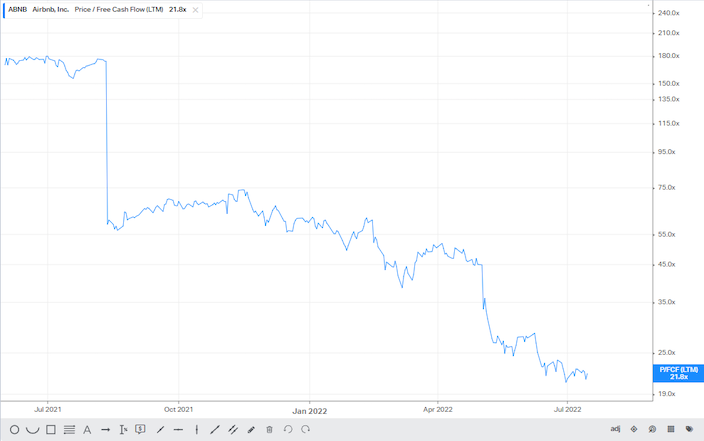 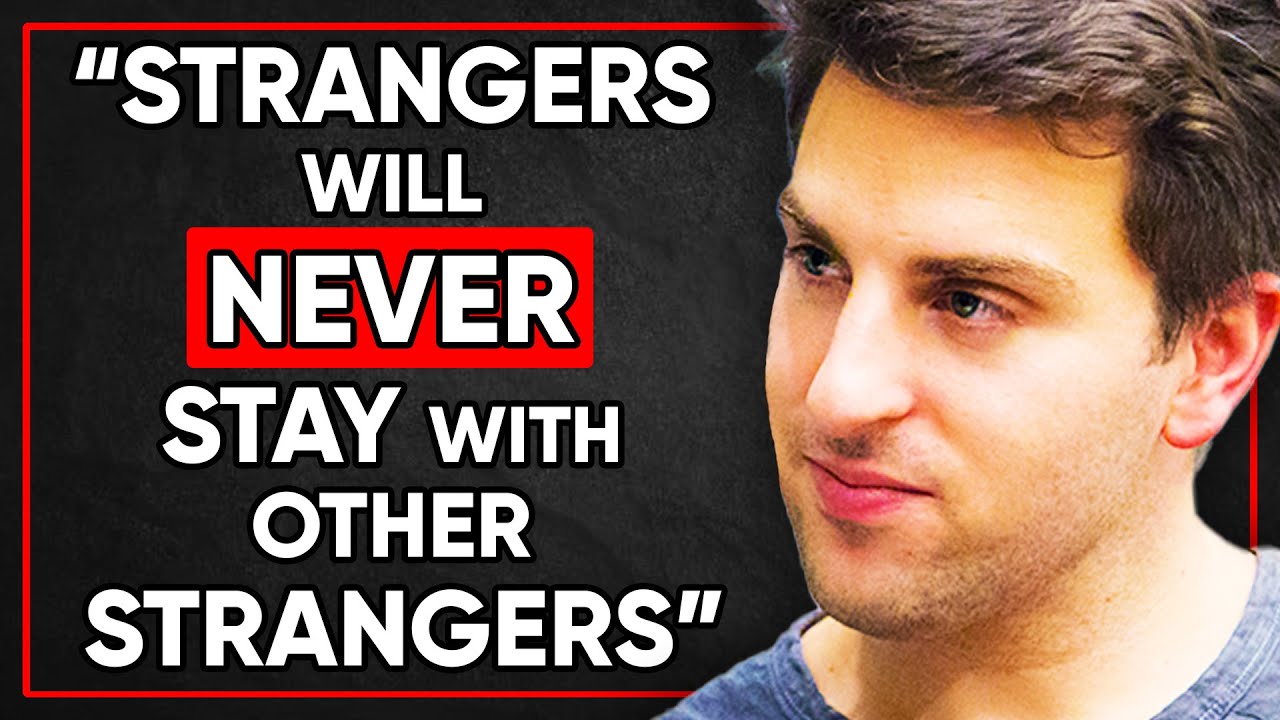 Confessions of Airbnb’s CEO | Founder Brian Chesky
Brian Chesky is co-founder and CEO of the peer-to-peer lodging service Airbnb, named as one of Time magazine’s 100 Most Influential People of 2015.Full show ...
YouTube

Samuel Meciar@sammeciarJuly 18
Author
@dissectmarkets I've touched on that briefly in the 3rd "Risks" part of the writeup where I explain why I believe that Airbnb now plays at least on an even field or even has some form of advantages in the negotiations given its position and net positive it brings to local communities. Considering regulation, evidence suggests they are navigating these waters well and working with administrations actively. For example, Ireland introduced a regulation allowing their residents to rent their homes only for 90 days a year and with a caveat of notifying the local authorities about the activity - just one of examples. Worst case scenario - should there be a regulation or even short term rentals forbidden, Airbnb is well spread out through more than 220 countries and 100k+ cities across the world so they don't face a major blow for their business should a few administrations decide to forbid these rentals.

StockOpine@stockopineJuly 18
Nice write up, $ABNB couldn’t be missing from the competition. What are your thoughts on long term stays? Do you believe this is one off tailwind reinforced by the pandemic or is this a long term growth opportunity for $ABNB ?

Samuel Meciar@sammeciarJuly 18
Author
@stockopine I do believe it's growing into an essential part of the business as long-term stays are becoming more and more popular with this overall push of Work-from-Anywhere. Confirmed by Brian Chesky himself on the latest earnings call: 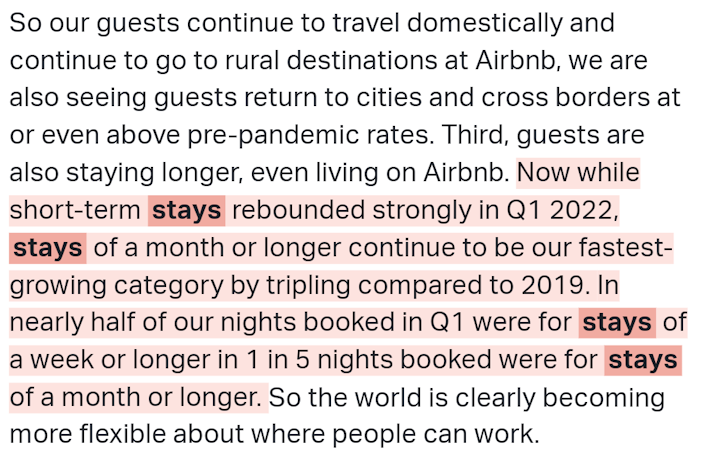 Pat Connolly@pat_connollyJuly 18
For the next 12 months are you concerned about AirBnb facing difficult YOY comps?
The last 12 months AirBnb benefitted from WFH + pent up reopening travel tailwinds but going forward we may be in a recession whereby the consumer isn't as strong & not traveling?

Samuel Meciar@sammeciarJuly 18
Author
@pat_connolly no, even if they face tough comps it doesn't break my thesis, otherwise I'd be out of many other companies in my portfolio too. The travel spend remains very robust despite all fear mongering, confirmed by multiple data sources. I believe there's nothing stopping Airbnb long-term and even if we see substantial slowdown in traveling, I think they can attract their users and move the traffic for the time being towards Online Experiences which are relatively affordable way to entertain yourself and perhaps learn new skills even during a recession, so I think overall the company is now stronger than ever before and perhaps diversifying from cyclical towards less cyclical business avenues. I'm excited to see what's next!

Joey Hirendernath@joeyhirendernathJuly 19
The launch of Online Experiences is definitely one I did not see coming. Looking forward to seeing how they will build and grow in this part of the business. Shows great promise!

Kiran@coin5d
These guys are unbelievably determined. Paul Graham constantly references them. That’s the only endorsement one needs

Eric Messenger@wall_street_deebo20h
That experiences sounds awesome. As someone whos never travelled, that’s what I would be looking for. Getting away from where tourists go (big money lies) and take my money to the locals.