Investor from Nepal 🎄@investor_from_nepalNovember 24
$111.8m follower assets
$NFLX games might fail
$NFLX's Games might not succeed, and here is why!
TLDR;
Netflix Games was a good move for the industry to solidify "one subscription for multiple games". I have been working on a similar solution as well and was thrilled when Netflix announced it, events like this propel the industry forward.
Here is why I think it won't work:
Lacks Gaming DNA 🧬
I will say for the millionth time that a company can hire all the top exes from other game companies, and best developers but if the gaming DNA doesn't come from the top, it doesn't work well. A gaming company without gaming DNA rarely succeeds.
Gaming DNA = invest long term, listen to players, let devs make decisions, CEO/management only provide resources
This is how a company's structure should look in a company with gaming DNA. 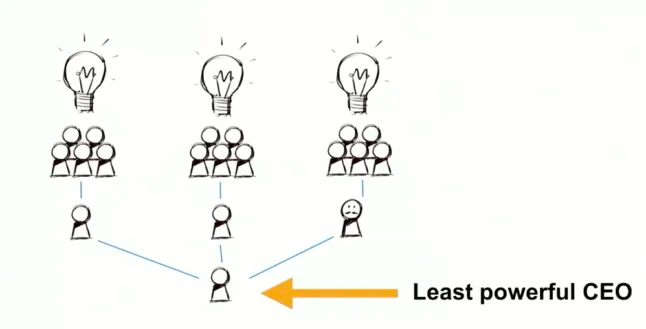 In games, it's not about what the company wants, it's about what gamers want. Will hires have the power to make decisions that gamers want and are management willing to invest money in the long term instead of looking for quick results?
Currently, looking at their games, it doesn't seem so.
Focus on retention 👀
Currently, Netflix is using games for retention. Games are either reskinned versions of older games or old games themselves. While focusing on retention is good, if they were doing an excellent job at it. They wanted something like Apple Arcade, but they missed heavily on the quality part. A game for longer retention (in mobile) should be easy to learn, hard to master, and engaging. While Netflix's Games lack engaging parts.
Retention is also driven by a game economy which it lacks because of its business model - no real incentive to keep playing the game.
Players don't like it 💔
Although the players have been playing with 1.7M MAU, the quality of games has been offputting for the users. 8 games are rated below 3 stars, and only 3 games are rated above 4 stars.
2 and 3 remind me of hypercasual all over again - snackable, easy to learn, hard to master games that keep you engaging for 5-10 mins. You play them when you are in the toilet or waiting for the bus. It's not wrong but it doesn't fit the business model of Netflix.
I think this is how the thought process went in Netflix:
_
While I was a fan of the initial strategy, leaving game development to developers, and adding their game to a subscription, creating by self seems counterproductive to me.
**AAA is another mountain ⛰
**
While Netflix has not been doing as well as it should have in mobile games, they are attempting AAA which is another mountain to climb. They have money and resources, but again it boils down to gaming DNA, do they have it? My answer is NO.
Projects like Stadia have succumbed to a lack of gaming DNA, and I think the lack of gaming DNA in Netflix (which Netflix Games) has shown can be a killer blow to its gaming business and an expensive one.
Having said that, they still have a few advantages on their side:
Either use the partnership to develop games or super subscription (one subscription for all subscriptions like X-box or PS subs)
Gamers don't need Netflix to play games, Netflix needs players. Netflix needs something better than the competition. With the current work, it doesn't seem like it is providing anything significant to players.
If games are a big part of the thesis, you might want to reconsider it.

Joey Hirendernath@joeyhirendernathNovember 24
Really appreciate the level of critical analysis/evaluation here. What was the prompt/inspiration for this post?

Investor from Nepal 🎄@investor_from_nepalNovember 25
Author
@joeyhirendernath Joseph Carlso's videon about netflix entering into AAA and my linkedin chat (which is full of game developers, CEOs of game and related tech and innovators) and the discussion we had.