Paul Cerro@paulcerroSeptember 13
$36.3m follower assets
Why the digital shelf is the key to CPG growth—both online and in-store
Grocery ecommerce has permanently accelerated and will approach 10% penetration in 2022. Ecommerce may still be a minor channel for food and beverage sales at 5.5% penetration, but the broader grocery market includes major sub-categories like pet products (36.0%) and health and personal care (16.5%), where ecommerce is a critical channel. 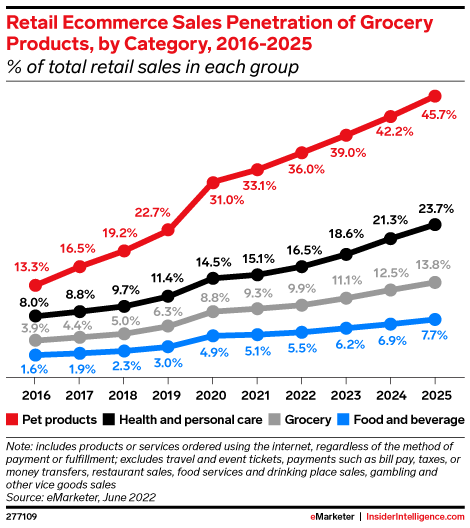 Amid the recent surge in grocery ecommerce—and corresponding rise in retail media—CPG brands must now grapple with the reality of what it takes to succeed in the digital realm. Here, the rules that determine who wins in-store no longer apply. The world of shopper and trade marketing exists in the physical store environment, where shelf space is finite and distribution matters. But ecommerce offers shoppers an endless aisle where more brands can compete on a greater number of attributes.
“In a physical store, the consumer notices your brand because of where you’ve negotiated your shelf space or earned an endcap or off-shelf display,” said Todd Hassenfelt, ecommerce director of strategy and planning at Colgate-Palmolive. “It’s not because of the title on the tag. There are no bullet points, and shoppers have to pick up the packaging to see what’s on there. Whatever copy is on your package is probably not going to be optimized for the algorithm [on the digital shelf] to get you on page one or above the fold for either paid or organic search results.” 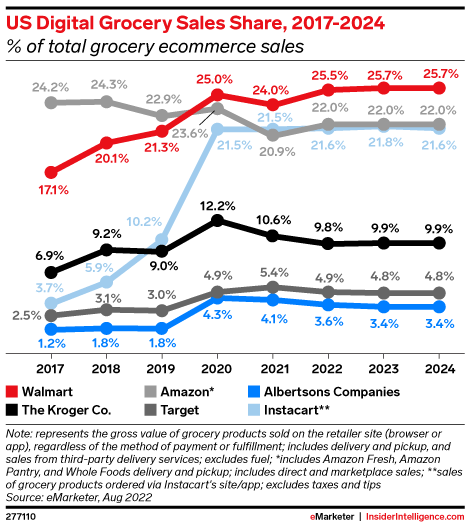 Winning at the digital shelf has never been harder, but the rewards have never been greater.
Successful CPG brands recognize that the digital shelf is a lever for success at brick-and-mortar retail. Nearly 95% of food and beverage sales and 90% of total grocery sales transact in-store, but there’s currently limited visibility into how retail media ads influence these sales. Even assuming that online ad exposure drives modest offline-sales lifts, total attributed sales could be several times higher than ecommerce data alone.
Citing recent research from Walmart, Mike Black, CMO at Profitero, said 82% of Walmart shoppers use their smartphones while shopping for groceries, and 43% use it to compare brands and products on Walmart.com.
“You realize that ecommerce isn’t just a channel,” Black said. “It’s a shopping tool.”
As the link between online and offline becomes better understood, grocery retailers with the biggest store footprints—Walmart and Kroger—will gain the upper hand. Walmart boasts the largest scale in grocery, but Kroger’s loyalty card advantage could prove more important in the measurement footrace.
No comments yetBe the first to add your insight!