Conor Mac@investmenttalkSeptember 23
$335.5m follower assets
Equity Duration & Inflation: Lessons from the Nifty Fifty
Source: (Ensemble Capital)
This memo from Ensemble brilliantly highlights the relationship between inflation and multiple contraction and expansion for equities.
“In the early 1970s, a group of high-quality growth stocks such as Coca-Cola, Procter & Gamble, Johnson & Johnson, Walt Disney, American Express, and Pfizer generated gangbuster returns. At the time, these stocks were referred to as the Nifty Fifty. At their peak in late 1972, these stocks traded at a PE ratio of 42x while the overall S&P 500 was trading at a PE of 19x. But in 1973 and 1974, inflation rose rapidly, a recession hit, the overall market declined, and Nifty Fifty stocks underperformed sharply.”
The Nifty Fifty is an interesting bucket of stocks to study for any stock market historian. Often cited to have been a bubble, the composite of companies was actually incredibly high quality and buying at the peak of the Nifty Fifty era would have netted long-term investors a CAGR of ~12% today, about the same as the S&P 500. The bucket did poorly in the 1970s, but performed extraordinarily in the decades which followed all whilst remaining considerably undervalued relative to the S&P 500 for many years. 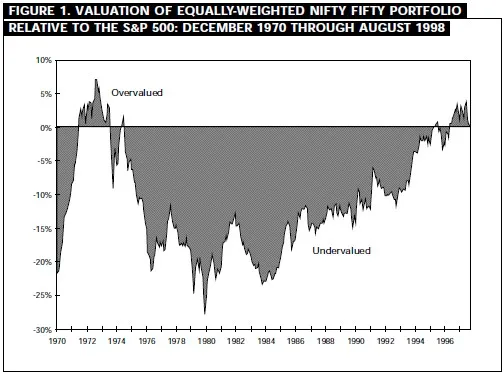 Coca-Cola $KO, for instance, traded at a PE ratio of 46x at the end of 1972, a considerable premium to the S&P 500’s PE ratio of 19x. However, Coca-Cola still went on to generate a 16.2% CAGR over the next two decades, a return well ahead of the S&P 500’s 12.7%. Whilst, not every Nifty Fifty constituent did as well, in hindsight, it’s tough to argue that the Nifty Fifty as a whole was “overvalued”. So, the question begs; why did they perform so badly in the 1970s? The answer is stagflation; the simultaneous appearance in an economy of slow growth, high unemployment, and rising prices (inflation). Inflation troubled the market for nearly a decade at this point and the multiples of growth stocks plummeted. Only once investors believed that inflation would remain at lower levels on a sustainable basis, did valuations quickly reset to higher levels. I will share the excerpt that so eloquently details how multiples expand and contract during inflationary environments. 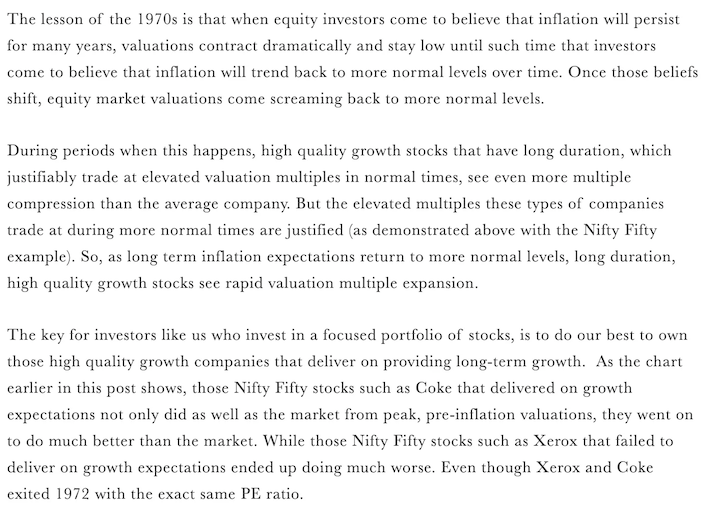 The team conclude by pontificating about what we can learn from this era in relation to what we are witnessing today; with inflation rife, growth slowing and unemployment not yet spiking. Although there are similarities, to the Nifty Fifty era, much of what is about to unfold in the world economy is uncertain. Should the bout of inflation be contained within 2-3 years, then we may see attractive near-term multiple expansion for those names (quality names) that have been hit hardest today. Should we face a more drawn-out bout of rising prices, much like in the 1970s, then that pain may linger for considerably more time, and the delayed gratification will be extended. 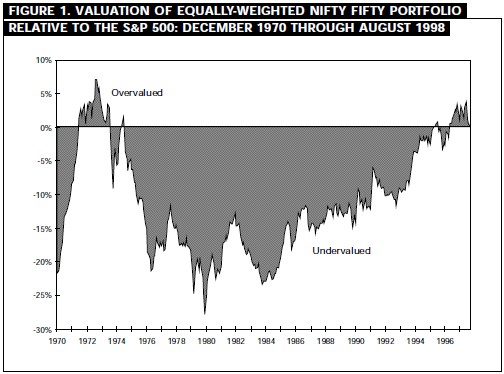 Equity Duration & Inflation: Lessons from the Nifty Fifty - Intrinsic Investing
This is Part III of a three-part series. Read Part I here and Part II here. In the early 1970s, […]
Intrinsic Investing
No comments yetBe the first to add your insight!