Edmund Simms@valuablJanuary 25
$30.6m follower assets
Cost of capital
Finance’s most important yet misunderstood price is capital. Here’s what happened to the cost of money in the past fortnight.
•••
Stock prices rose last fortnight. The S&P 500, an index of big American companies, climbed 4% to 3,991. The market has bounced back from its October lows but is still down 13% in the past year. I value the S&P 500 at 4,154, which suggests it is 6% undervalued.
S&P 500 valuation model
The companies in the index earned $1.8trn after tax in the past year. They paid out $499bn in dividends and $981bn in buybacks, and issued $69bn worth of equity. 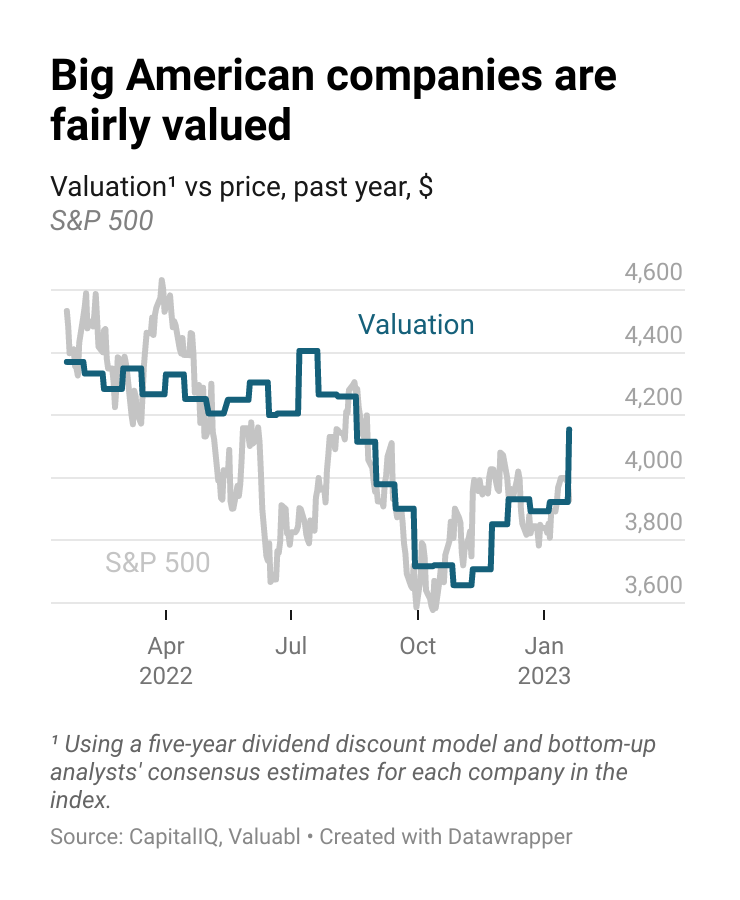 Government bond prices rose. Yields, which move the opposite way to prices, fell as inflation expectations did. The yield on a ten-year US Treasury bond, a critical variable analysts use to value financial assets, dropped 16 basis points (bp) to 3.5%. Investors expect inflation to average 2.1% over the next decade, down 10bp from the rate they expected last fortnight.
Hence, the real interest rate, the difference between yields and expected inflation, declined 6bp to 1.4%. These inflation-adjusted rates are up two percentage points in the past year. 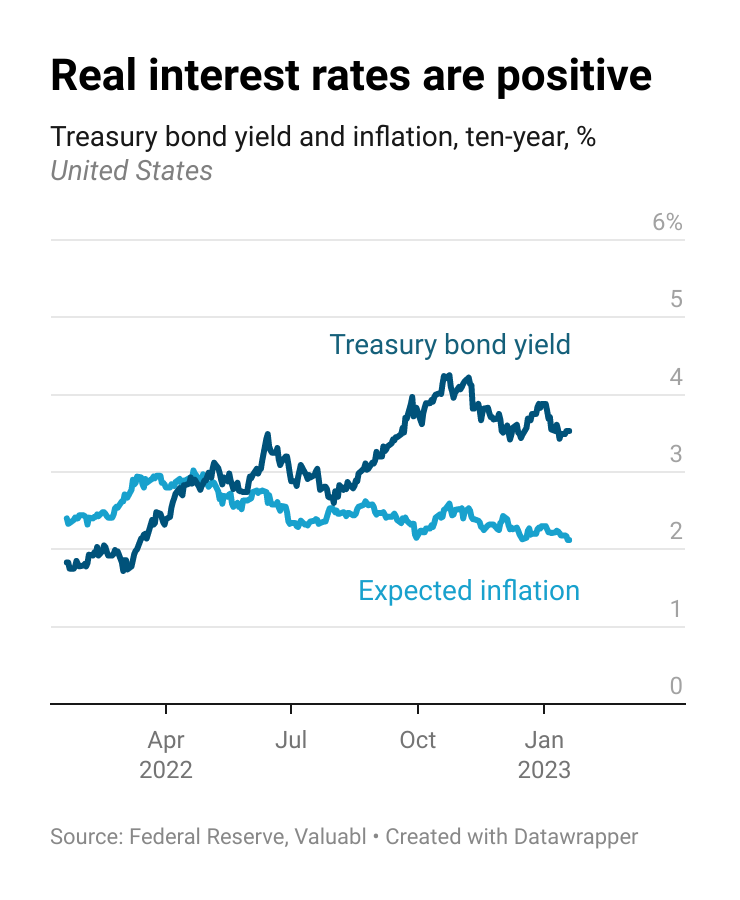 Corporate bond prices also went up. Credit spreads, the extra return creditors demand to lend to businesses instead of the government, fell by 13bp to 1.6%. The spread on these BBB-rated bonds is up 39bp in the past year.
The cost of debt, the annual return lenders expect when lending to these companies, collapsed by 29bp to 5.1%. Refinancing costs have almost doubled, up 2.1 percentage points, in the past year. Lenders now charge firms about the highest interest rates since 2009. 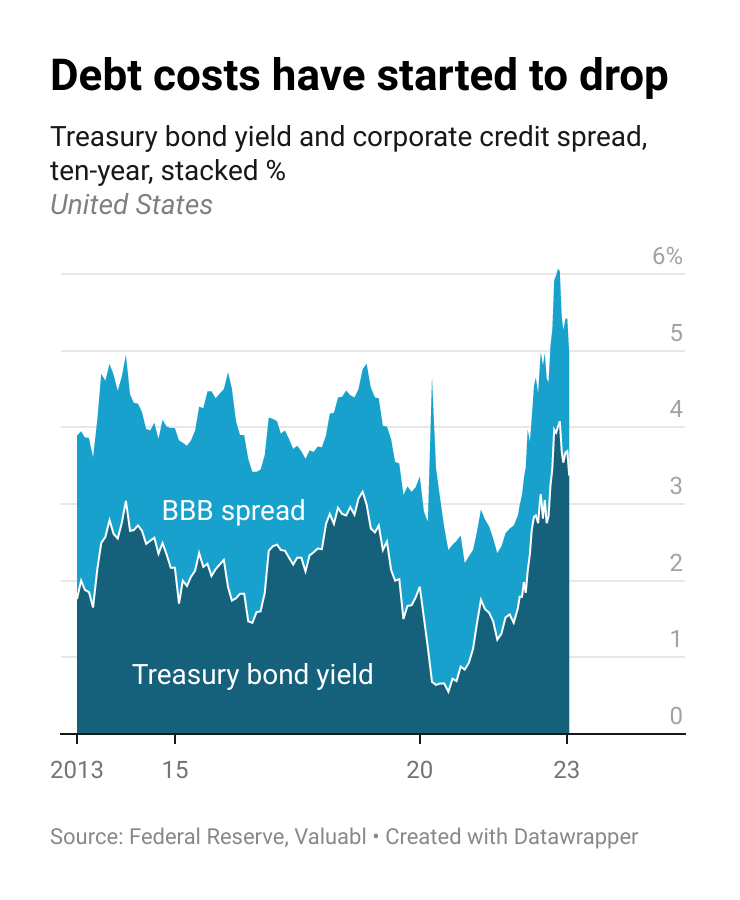 The equity risk premium (ERP), the extra return investors demand to buy stocks instead of risk-free bonds, rose 21bp to 5.4%. It’s now 57bp higher than where it was a year ago. In addition, the cost of equity, the total annual return these investors expect, rose 5bp to 9%, 2.2 percentage points higher than last year. These expected returns are also roughly in line with the long-term average. 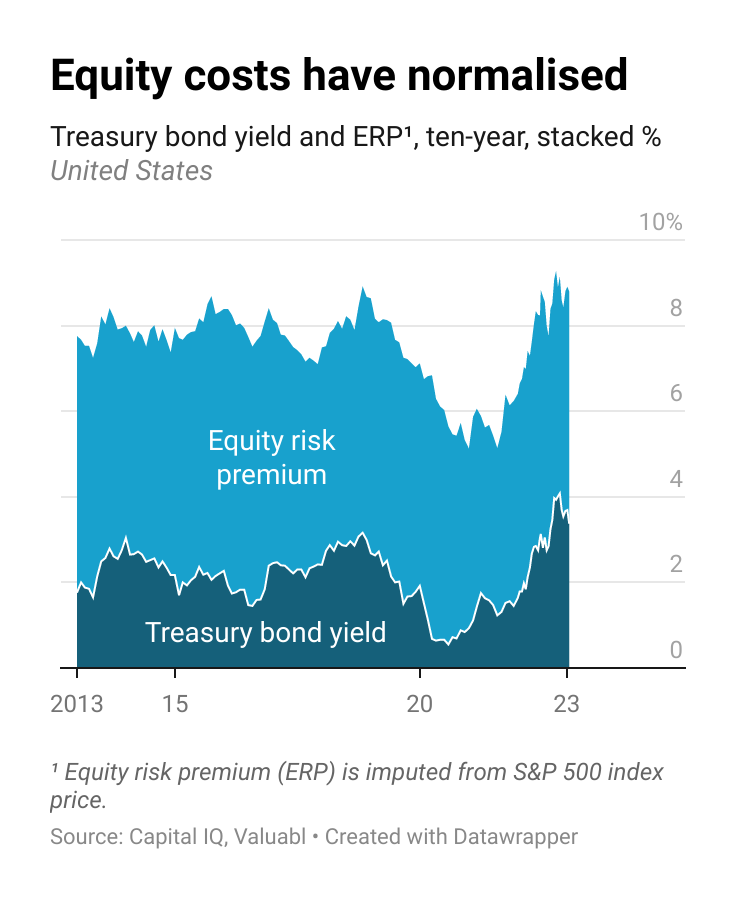