Steve Matt@interrobangbrosJune 14
$10.5m follower assets
How To Make Me Not Trust You In Three Steps: $COIN Edition
Step 1: Brag about tripling your headcount in 12 months and tout it as making key investments to future growth.

Step 2: Less than 4 months later, announce you are rescinding already-accepted job offers. Make it extra tasteless by including a literal TL;DR at the top of your company announcement. 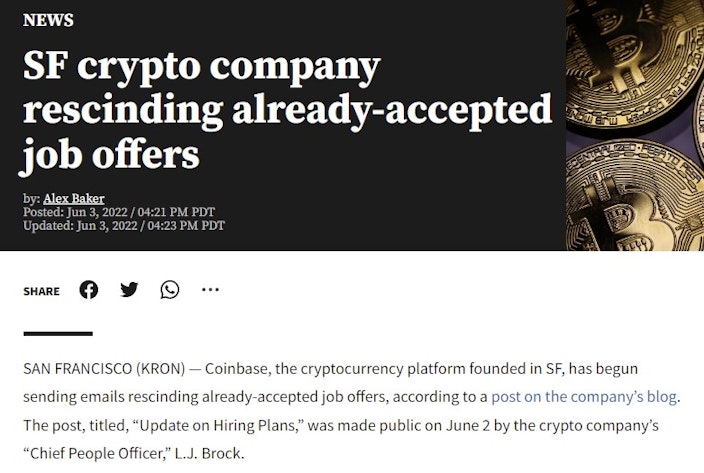 Step 3: 11 days later, announce you're laying off 18% of your key investments toward future growth, or the equivalent to 44% of the hires made in 2021.
1,100 lives turned upside, likely many of them who left a job in 2021 to join Coinbase only to be fire less than 12 months later. Coinbase is offering 14 weeks of severance + 2 additional weeks for each year employed beyond one year, COBRA and mental health benefits for 4 months, and help finding new jobs. Cool. That's all well and good... if we aren't actually entering or in a recession where job losses will accelerate and job openings will decrease.
Some people will say at least they are owning up to their mistakes, and that's true, but their mistakes likely led to many people have their lives turned upside by leaving a job to work at Coinbase only to have the rug pulled out from under them by a management team that seems utterly lost in a crypto winter. This is awful by the management team.

Irish Born Investor@irishJune 14
Fascinating to watch these companies sort of implode in such a quick fashion.

Sachiv@passiveinvestorJune 14
It’s a tough sector to pioneer…I totally sympathize with those(and their families) you speak of who have just been hired and will be fired! It seems to be happening globally with startups and high growth cos.

Dissecting the Markets@dissectmarketsJune 14
I feel bad for the Class of 2022 that was looking forward to working at Coinbase. Having their full time offers rescinded is a terrible way to finish university.