ParrotStock@parrotSeptember 21
$265.7m follower assets
BP Toledo Fire/Explosion
In this case... I wish I would have been wrong.
Sadly we saw our first major refinery incident (likely) due to poor maintenance. BP Toledo had a Fire/Explosion last night with two reported injuries. 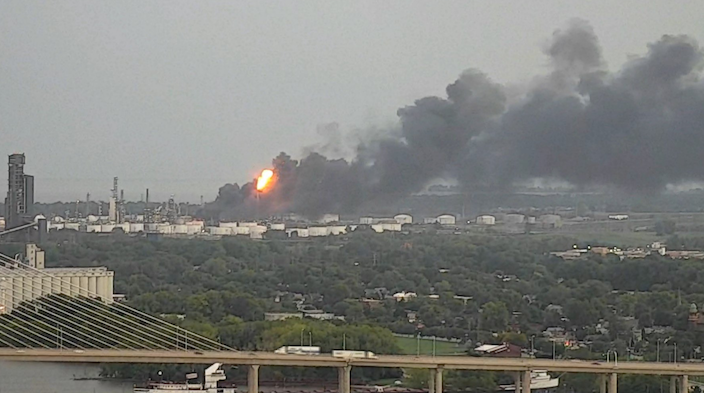 I've mentioned this before, but most refineries delayed turnaround and maintenance activities through the pandemic because they were losing money and trying to preserve as much capital as possible to weather the storm (market).
As we came out of the shutdowns and prices rose, refineries delayed turnaround and maintenance activities to capture as much profit as possible while crack spreads were at record highs. Over the past 6-9 months, refiners have spared no cost to band-aid repairs and stay running.
Other things that have suffered over the past couple of years is training for operations and inspection budgets. Any and all programs that could be cut to save a dollar, and I don't blame them. It was either that, or go out of business, but we are now on the cusp of paying the price for those moves.
One other aspect is experienced personnel. A LOT of experienced personnel retired or were laid off during the pandemic, and we have probably the highest average ever of personnel with 1-2 years of experience. Couple in the cuts in training, and its a recipe for failure.
All that being said, it doesn't mean every refiner will have an issue. Most have good policies and procedures and multiple levels of redundancy in place to protect against catastrophe. But the more variables we throw at it, the more likely we will see an incident.
We will probably learn that multiple safeguards failed to cause this incident, likely not a single error. Usually one of 2 things: 1) Inspection failed to identify and/or monitor for a damage mechanism, and it silently deteriorated until failure, or 2) An operational upset was mishandled by operations causing an overpressure and/or release. Those are the two most common reasons for failure (but there are other possibilities).
Market
Refiners are operating near maximum capacity. BP Toledo processes approximately 160,000 barrels of crude per day. I have no idea how long they will be down, but the supply shortage will be felt.
Couple that with the potential for other incidents, hurricane season, and scheduled outages that will start this fall, and ramp up over the winter; it's a recipe for supply shortages and price increases.
Two factors could blunt the price increases, the first being a recession significantly driving down demand. With employment high, I just don't see that having a huge impact on demand in the near term.
The other is oil prices. Lack of refining capacity could actually lower oil prices due to lower demand from refining. This could have the effect of keeping fuel prices flat or muting some of the price increases, while still increasing refining profits. I've mentioned this theory before, and it's a scenario we haven't seen much historically, but we are in a new environment where the bottle neck is in refining, not necessarily oil production (although we are artificially meeting demand by releases from the SPR).
It's late in the 3Q and likely won't effect BPs bottom line this earnings period, but any extended outage will have an effect on their 4Q profits. BPs loss is other refiners gain as they reap the benefits of increased crack spreads from a lower supply.
Btw, crack spreads increased another 8-10% yesterday, the last two days erasing all the losses from last weeks drop. This was before the after hours incident at BP.
I remain bullish on refiners.
Prayers to the BP employee's and their families. 🙏
🦜

sam stribling@stribSeptember 21
Great job! Damn you did see this coming. Do they know how long it’ll be down? That’s the critical question now I think.

ParrotStock@parrotSeptember 21
Author
@strib No word yet, but will likely be at least a month+, at least for the effected unit(s). That size incident will require a significant equipment damage assessment and at a minimum all the cabling for instruments and electrical will have to be replaced. Without knowing the unit or extent of damage, I'd bet about 3 months.
Note: it's possible that part of the plant could keep running depending on which units were effected, but I'd imagine the whole plant would stay down for a couple of weeks at least.

sam stribling@stribSeptember 21
@parrot that sounds like as good an estimate as any.
Kinda a big night last night.. war escalated, nationalized the gas co in Germany.. one of our refineries has an explosion.. jeez 😬