Dividend Dollars@dividenddollarsJanuary 16
$24.6m follower assets
Weekly Market Update & Outlook - CPI & Earnings Season
From my weekly market update and outlook article: The stock market decided to keep the heat on high for the second week of 2023. We logged decent gains on the basis that the Fed won’t have to raise rates as much as feared and that the U.S. economy may see a “soft landing” after all.
​
The first half of the week was a snooze-fest, as most traders were waiting for Fed Chair Powell’s speech on Tuesday, the December Consumer Price Index (CPI) on Thursday, and bank earnings reports on Friday that marked the official start to the Q4 earnings reporting season.
​
Fed Chair Powell gave a speech titled “Central Bank Independence” Tuesday morning. Powell’s speech made no mention of any kind of policy that would harm markets, he did, however, acknowledge that, “…restoring price stability when inflation is high can require measures that are not popular in the short term as we raise rates to slow the economy.”
​
The latter point notwithstanding, the S&P 500 was able to close above technical resistance at its 50-day moving average.
​
By Thursday’s open, the market had received the much anticipated CPI report. It was in-line with the market’s hopeful expectations that it would show continued disinflation in total CPI (from 7.1% year/year to 6.5%) and core CPI (from 6.0% year/year to 5.7%).
​
Those were pleasing headline numbers, but it is worth noting that services inflation, which the Fed watches closely, did not improve and rose to 7.5% year/year from 7.2% in November.
​
​ 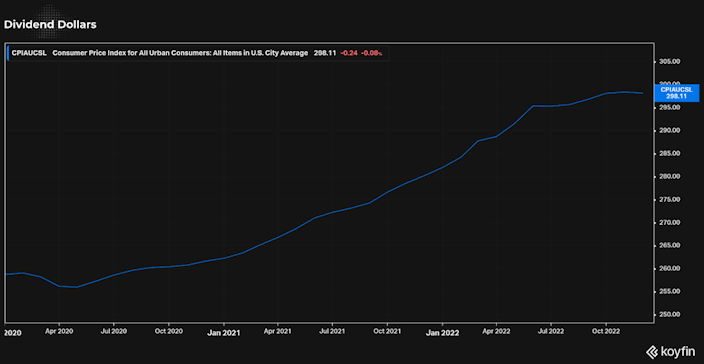 ​
That understanding did not seem to hold back the stock or bond market. After a brief dip, the price action on Thursday generally supported the view that the Fed will pause its rate hikes sooner rather than later. In fact, the fed funds futures market now prices in a 67.0% probability of the target range for the fed funds rate peaking at 4.75-5.00% in May versus 55.2% a week ago, according to the CME FedWatch Tool.
​
The move up in the stock market was particularly notable considering the big move leading up to the CPI report. The S&P 500 was up 3.7% for the year entering Thursday and up 4.4% from its low of 3,802 on January 5.
​
Ahead of the open on Friday, the market gave back some gains and featured a series of mixed quarterly earnings from Bank of America ($BAC), JPMorgan Chase ($JPM), Wells Fargo ($WFC), and Citigroup ($C). Those stocks languished out of the gate due to higher-than-expected credit loss provisions. But true to form for 2023 so far, buyers returned and bought the weakness. Before long the bank stocks were back in positive territory and so was the broader market.
​
The S&P 500 moved above its 200-day moving average (3,981) on the rebound trade and closed the week a whisker shy of 4,000.
​
Only one of the S&P 500 sectors closed with a loss this week: consumer defensive (-0.74%) — while the heavily weighted consumer cyclical (+5.94%) and information technology (+5.58%) sectors logged the biggest gains.
​
​
​
The 2-yr Treasury note yield fell five basis points to 4.22% and the 10-yr note yield fell six basis points to 3.51%. The U.S. Dollar Index fell 1.6% this week to 102.18.
​
WTI crude oil futures made strides to the upside this week rising 8.5% to $80.06/bbl. Natural gas futures fell 4.8% to $3.23/mmbtu.
​
Dividend Dollars’ Opinion
​
That’s it for the recap. Now for my opinion!
​
As I mentioned in the last market update, after basing around the 3,825 level for a while, the next move was a significant one. I expected that dip buyers would step in with tax loss harvesting over, earnings season approaching, and the next rate hike still a few weeks away.
​
I said, “they could push the market higher for next week, or even the week after that” and that’s exactly what’s happened! The January Effect is in full swing. Last week I was correct in not expecting any major move in one direction or the other.
​
I predicted a short-term bounce before drawbacks are caused by possible earnings disappointments, the next rate hikes, and key economic data misses. We saw this week that two of those items are losing steam.
​
The CPI report showed that falling inflation is confirmed, but not overly impressive.
​
Then, the banks kicked off earnings. Even though they beat expectations, their results were a mixed bag. But weren’t enough to push the market lower. Many more key earnings are to come, but if the banks were any indication, this earnings season may not be the “make it or break it season”.
​
So far, 6% of companies in the S&P 500 have reported Q4 results with an 86% beat on EPS and 57% beat on revenue. The earnings so far show 4% growth on a year-over-year basis compared to a -4.1% estimated when Q4 ended. The season is still early, so let’s not extrapolate on these results too much. Rather, lets look at the technicals!
​
​ 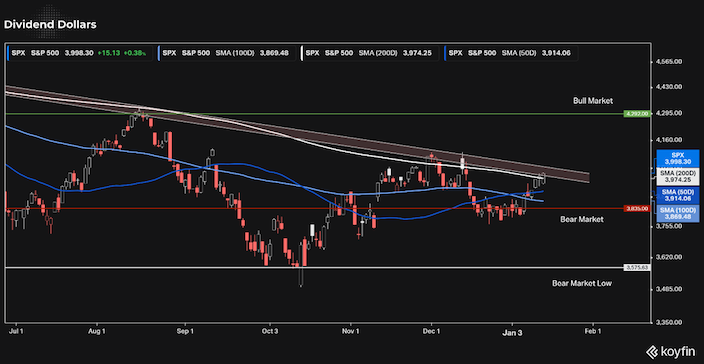 ​
A lot has changed since the last time we did weekly update. The bear market low is still intact and 4,292 is the target for a new bull market to start. These two items are now -10% and +8% away from the current level.
​
For weeks I have been pointing out the resistance at the 50-day SMA (dark blue line) and the 100-day SMA (light blue line), the market finally broke above them. It did not take long for the next level, the 200-day SMA (white line), to come into play. Our last daily candle still encompasses the line, which is not yet a clean break. This line also converges with long-term downtrend area that began at the last all time high. The prior four failures at this level suggests it won’t be easy to break.
​
I think we have seen the short-term bounce that I last wrote about. This resistance we are heading into is the mother-of-all-resistance! Bargain buyers came in strong in the first two weeks of 2023, but steam may run out soon if earnings season disappoints and resistance proves heavy. I wouldn’t be surprised to see profit taking, and a red week next week, but I don’t believe we will fall under the 100 SMA now turned support.
​
That’s it for my recap! If you would like to see how I am building my dividend portfolio using my predictions/strategy written here, you can read about my buys in my weekly portfolio update on this link.

Dividend Dollars
Weekly Dividend Portfolio Update
Weekly update on a long-term dividend growth portfolio from a young investor to show you how I’m investing to reach financial independence! To date the portfolio is just below breakeven and is beating SPY by over 13%!
No comments yetBe the first to add your insight!