Dividend Dollars@dividenddollarsJanuary 20
$25.7m follower assets
Ørsted ($DNNGY) - The Green Power Opportunity in the North Sea
From my website, feel free to read the full article here!
Recently, in an article from the Economist, I read how the seaport town of Esbjerg in South Denmark has boomed in the past decade due to the green industry, mostly caused by the wind industry. The change of the town’s economy is the product of a much bigger change that is underway within the North Sea. And this change is one that I think may be another green energy add to my portfolio among the likes of $NEE and $AY.
The North Sea
-------------
For those that don’t know, the North Sea lies between Great Britain, Norway, Denmark, Germany, the Netherlands, and Belgium. It connects the Atlantic Ocean to the English Channel in the South and the Norwegian Sea in the North while covering about 220,000 square miles. It hosts key northern European shipping lanes and is a major area for fishing, recreation, and tourism in bordering countries.
For decades, the North Sea has been a vital source for Europe’s oil and gas but it is shifting to green energy. Although the region’s hydrocarbons are finite, its strong gales are certainly not, which has created a vast opportunity for wind and wave power sources. The importance of this shift has been exacerbated by the oil squeeze caused by Putin’s war in Ukraine and climate change.

Currently, there are dozens of offshore wind farms in operation throughout the North Sea. Managing these farms takes quite a lot. There are offshore windfarm bases that are often 30+ miles away from the coast. Rather than sailing back and forth, operators spend weeks at sea on these platforms that are equipped with gyms, chefs, video games and other amenities to keep them around. The wind farms are moving further and further away at sea to capture stronger and more consistent winds.
Long term, the ambition within the North Sea Economy is to produce electricity. The objective is to produce 260 gigawatts of offshore wind power by 2050.
A study was done a few years ago, that found that at least 600 gigawatts of infrastructure could be installed in the North Sea. The European Commission looked into what power is needed, and the sum of those needs reaches 300 to 400 gigawatts.
That is enough to power all of today’s 200 million households in Europe and is about 5x what is currently produced in the North Sea. This power is to be cheap and green which is key for producing hydrogen.
Natural gas is typically used for producing hydrogen, this is known as blue hydrogen. With the amount of green energy the North Sea plans to produce, it will be a key area for producing green hydrogen, which produces far less carbon dioxide.
Hydrogen is central to the world’s climate targets. It is a way to store electricity when it can’t be used straight away. This is perfect for windfarms, because when the wind blows strongly there’s no way of knowing if that power has an immediate demand.
Hydrogen can also be used as a fuel in industries that cannot be easily electrified like air transport, shipping, or steel making. If we have enough green hydrogen to power these items, than a big carbon dioxide problem is solved. 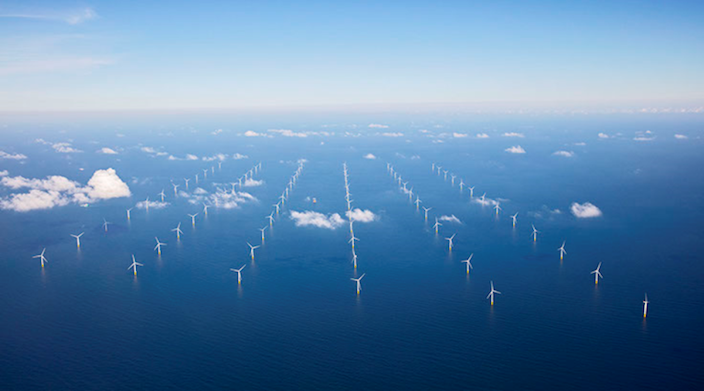 Ørsted
------
Orsted is the world’s biggest offshore wind developer and used to be known as Danish Oil and Natural Gas. They were a traditional conventional power utility company and have transitioned today into becoming a pure renewable energy company.
Orsted has found that the North Sea is very attractive for windfarms due to the relatively shallow depths, the soft seabed which is good for building the turbines, the gales, and the surrounding countries with heavy energy consumption centers are all positives, making the North Sea the honeypot for offshore power.
Windfarm technology has developed out of teen years and is able to be scale dup massively now. It is no longer an expensive idea that needs subsidies for supports, it is cost competitive and Orsted believes that the goals for 2050 can be done.
Of the 300 to 400 gigawatts needed by 2050, Ulrik Stridbaek of Orsted anticipates that 200 to 300 gigawatts of that could come from the North Sea.
Orsted now can build larger turbines, larger offshore windsites, and can erect 80 to 100 turbines in one go. As that number as increased, so has the windsites which have grown to produce 1 to 2 gigawatts per site. This is the equivalent of a nuclear power site.
The next step to scale up to 5 to 10 gigawatts presents the problem of how to get the power to shore in an efficient way which is thy Orsted is also getting involved in building what is called energy islands. These islands are a physical hub for connecting large scale offshore wind power and then interconnecting to shore as well as hosting hydrogen production and other activities that make sense to have nearby the farms. 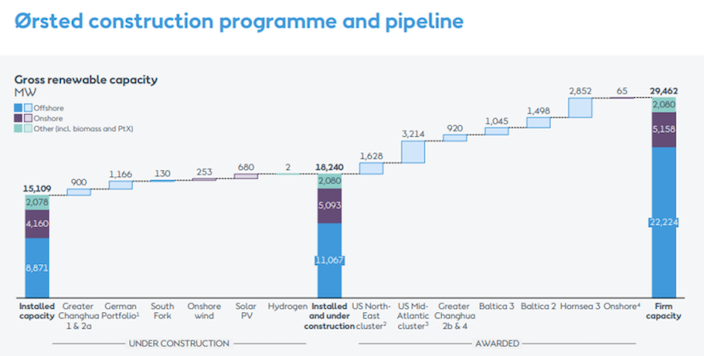 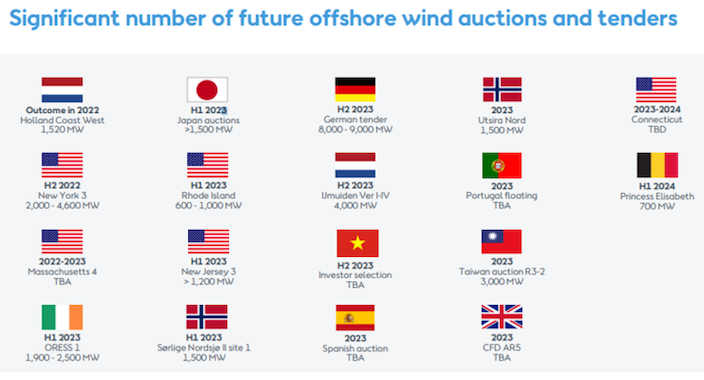 As shown in the graphics above, Orsted has a litany of projects undergoing construction, even more that have been awarded, and a number of auctions for even further future projects throughout the globe, not just the North Sea. Their offshore wind build-out plan shows that they will almost triple their installed capacity by 2027. 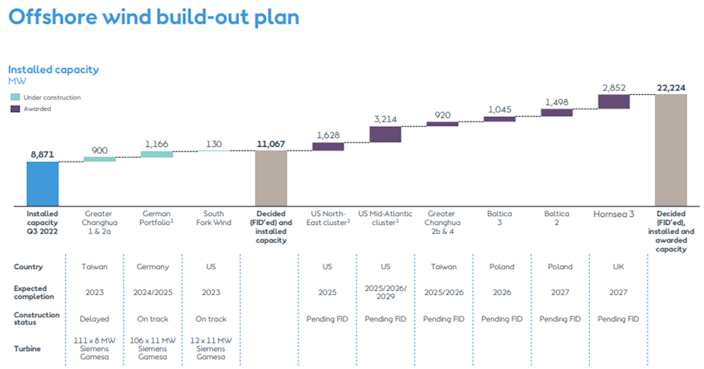 Their energy capacity is growing and so are their financials. Their EBITDA grew over 300% YoY in their last earnings report. Total Net profits were up 1,800%. As climate change becomes a more followed issue and as Europe tries to get out of Putin’s oil pocket, Orsted and their projects will only benefit providing additional growth on the income statement. 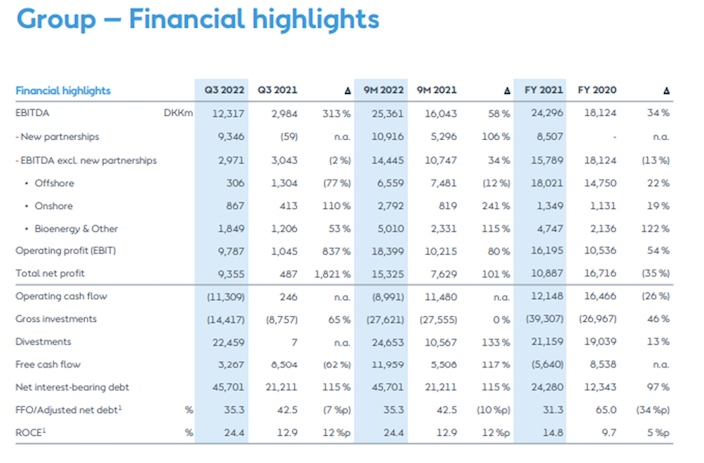 Overall, this may be another long-term green energy play that I buy, add, and hold onto with the likes of $AY and $NEE. Orsted trades on most brokerages as an ADR with the name $DNNGY and is currently priced at $32.31. As always, do your own research, but heed that especially this time as ADR’s carry a different set of risks. Thank you for reading!

Dividend Dollars
Ørsted ($DNNY) - The Green Power Opportunity in the North Sea
The North Sea provides a great opportunity to build out off shore energy infrastructure. Let's dive into a company that is positioned for it.
No comments yetBe the first to add your insight!