Rich Excell@stayvigilantSeptember 14
$16.4m follower assets
Chart of the day - surprises part 2.
Was in class all day yesterday and so I could only see the results of the mkt move after the close. It was a bit of a surprise, not in the direction because we spoke about that in the
morning, but in the magnitude. I read one person on Twitter referred to it as a 4 s.d. move, looked more like a little over 3 s.d. to me but I don't want to pick nits. Moves like that should happen about once every 3 years. You might wonder why something like that happens on a CPI number but it does show you that inflation & the Fed are the biggest game in town.
Though it isn't the only game in town. In my work, I like to look at both inflation & growth to determine which phase of the economy we are in. Going into this number, over the previous 1-2 months, the mkt was pricing in falling growth & falling inflation. Yesterday, amidst the noise, it moved to price in still falling growth but rising inflation. I determine this from the sector & style moves I see in the mkts.
What do we know about growth? We know the latest reading of the ISM came in better than expected. Some might wonder if growth is even going to fall. However, the ratio of new orders
to inventories (in orange) has plummeted & that usually points to weaker growth ahead. Historically back to 1947, the ISM takes anywhere from 15-24 months from peak to trough. It peaked in March of 2021 which might suggest a trough sometime in late Q4 or early Q1. Where it troughs is the bigger question.
Importantly, as we are about to begin #earnings season, we can see that the ISM in white is coincident with the % of positive surprises we see from companies. If ISM is still expected to go lower, earnings are still expected to go lower. You can see in the bottom chart (courtesy of CS) that consensus earnings expectations for Q3 are considerably below the path taken last qtr. The mkt sees the ISM falling & is expecting some amount of this fall in earnings surprises.
The bad news is we know multiples are going to contract as long as the Fed is hiking as we looked at yesterday. If earnings are falling too, this paints a bleak picture over the course of
the next few months. Yes, we can rely on positioning that is quite bearish. However, leverage was not maxed out so there is more that could happen. Additionally, since a large part of the mkt is passive or systematic, the reactions from these players has most likely not happened yet.
The temptation on big drawdowns in the mkt is to look for bargains. It might be a little early to do so with the possibility of more surprises - from earnings or from the magnitude of the moves we are seeing. Now is a time to ...
Stay Vigilant 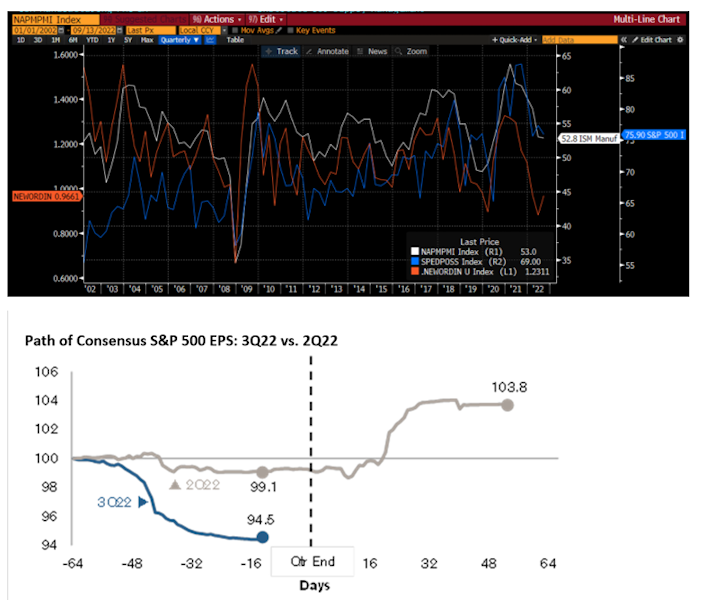 Sign Up | LinkedIn
500 million+ members | Manage your professional identity. Build and engage with your professional network. Access knowledge, insights and opportunities.
www.linkedin.com
No comments yetBe the first to add your insight!